Call it a hunch but I think I prefer visual novels that adapt a source that is somewhat well-known. Having reviewed Cinders in the past, I enjoyed that take on the Cinderella story. It also felt like a breath of fresh air from a genre more pre-occupied with telling the same ‘stranger in a strange land’ narratives. So here comes Hanako Games with A Little Lily Princess. A take on an old classic that largely works well. 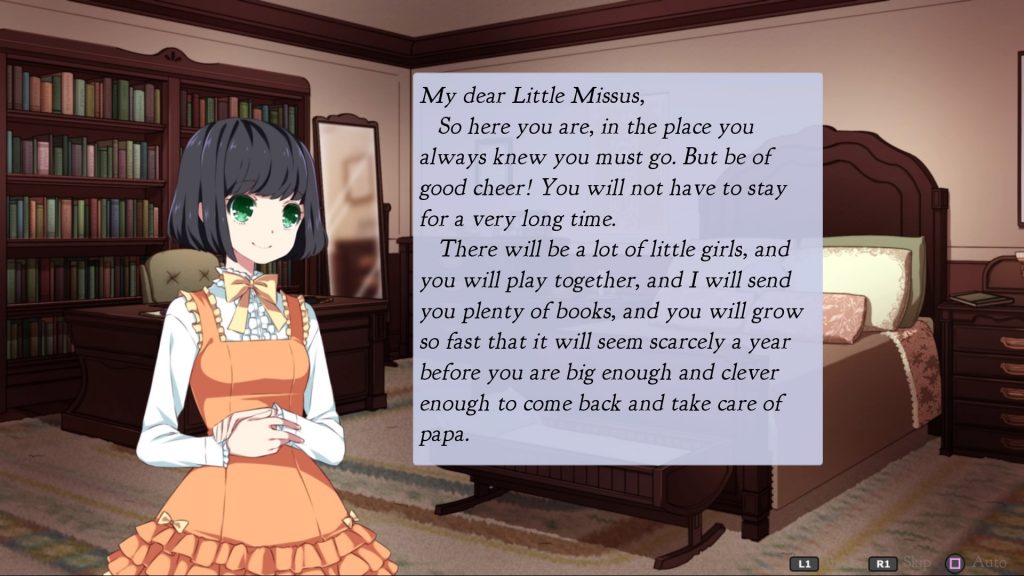 A Little Lily Princess takes its tale largely from the 1905 children’s novel, A Little Princess. Adapting a more famous story isn’t new ground for the genre but I do enjoy any opportunity authors take to escape the usual trappings and tropes. The premise follows the book beat for beat. You play as Sara Crewe, an only child who’s been raised in India by her wealthy father. He’s sent Sara to a boarding school in England to escape India’s climate.

Rather than the usual backstabbing and bullying that encompasses a boarding school setting, Sara is given special treatment with her own personal maid and a room. Despite the privileged background, Sara’s portrayed as fairly mature and sociable. She quickly strikes up a friendship with the other girls and staff. The school is ran by Mrs Minchin who is your typical authoritarian. Corporal punishment is commonplace and she does rule with an iron fist.

If you’re looking for major deviations from a century’s old work, A Little Lily Princess won’t initially deliver. As someone new to it, I did find the tale enjoyable. Maybe it’s because my experience of the visual novel genre is so saturated with tat, but I found this to be a refreshing change of pace. The tale does take a turn but, if you’re familiar with the book, none of it will surprise you. 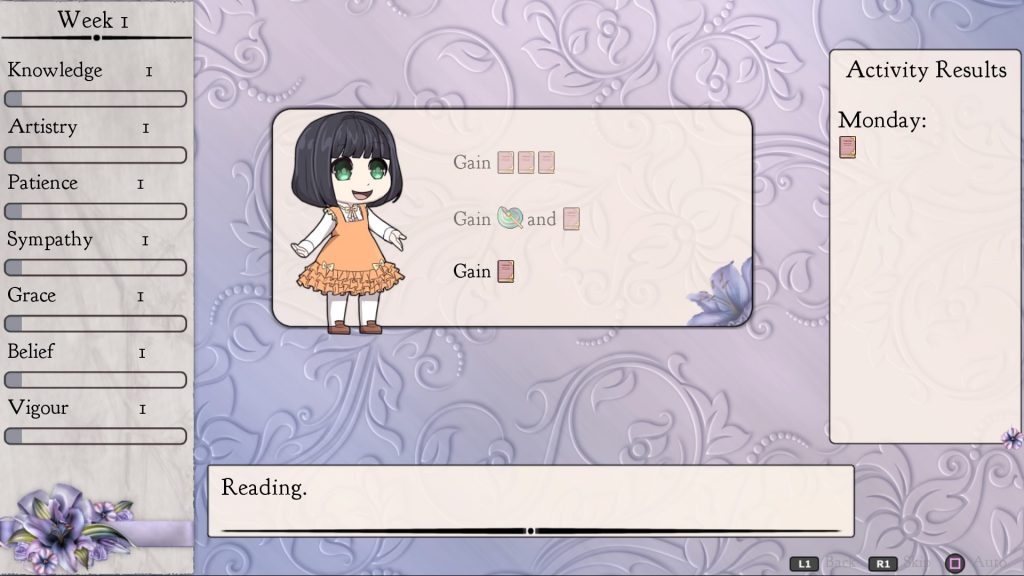 The cast works well. There’s some stereotypes on offer but the typical boarding house fare of bullying and bitchiness doesn’t entirely come into play. The girls all have their own quirks and I’m mostly interested in how their stories turn out. I have slight misgivings about Lottie. As the youngest child (by a fair margin), she stands out a mile as a very literal young girl amongst a class of older adolescents. Her tantrums can get annoying but it does allow Sara to play an older sibling role.

Where the game starts to show some creativity is in the character routes. As with other visual novels, there is some player choice that comes along. Much like a dating simulator, it’s all dealt with in stat management. The game takes place over a large chunk of a school year and each week hands you a schedule to build. Every task gives you something that corresponds with Sara’s attributes. Things like her knowledge, patience and vigour are all built up with certain activities. These attributes then unlock events between Sara and another character.

This is a nice touch that allows the game the opportunity to deviate or expand on the original source material and substantially build up the cast. It’s not paced quickly so there’s a good sense of friendships forming between Sara her fellow classmates. The game is split up into two acts and, whilst I’m sure you can keep everyone happy, my playthroughs tended to lock me out of paths because I focused on one or two characters.

Requirements for these events are always clear and, whilst the attribute you need is sometimes obfuscated, A Little Lily Princess is not out to trick you. Despite the length of the school year, selecting your schedule doesn’t become a chore. I tried to spread my stats about as much as possible but focusing on a particular character does lead you think more about how you spend your time. 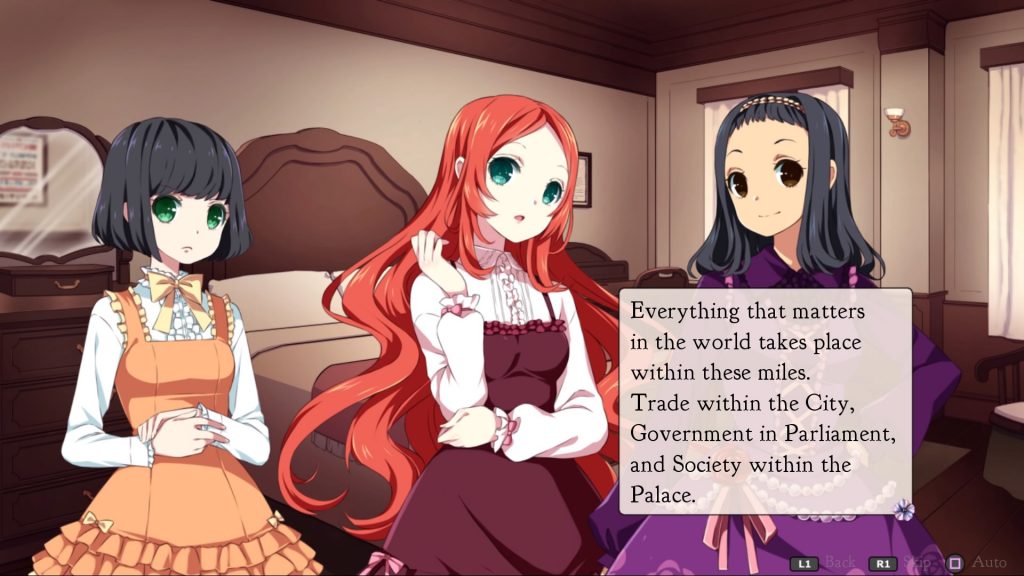 There is no traditional dialogue choices to branch story paths so, in this respect, influencing stats is your only way to steer relationships with the cast in a particular direction. It can feel a little mindless as you read off the game’s wordy script but at least the narrative is compelling. There’s plenty of events and endings to pursue that will keep you busy.

A Little Lily Princess has a nice look to it. The backdrops are nicely detailed and carry plenty of Victorian charm. The character portraits are typically anime in style but it doesn’t jar much with the more realistic setting. They all look individual and colourful and they are nicely animated There are occasional moments where a scene will play out in a chibi aesthetic which offer a slight change but these interludes last seconds.

I really like how this game is presented. Dialogue boxes are handled smartly with speech appearing below the character who’s speaking. It sounds like such a simple thing but it makes the screen much easier to follow and frames the imagery well. It avoids having the bottom quarter of the screen sliced off for the usual text scrawl and genuinely carries a more polished look. 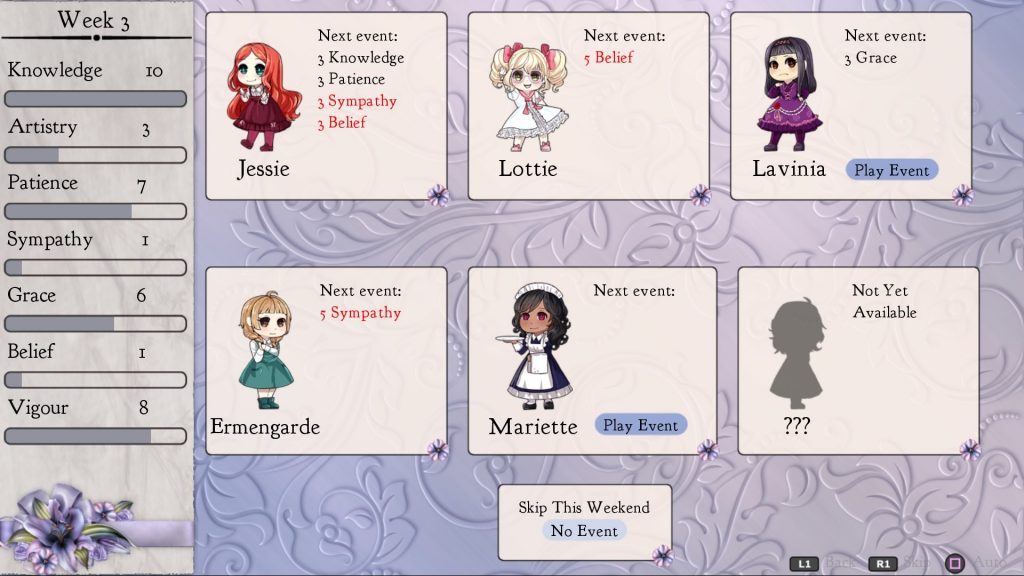 The soundtrack is largely delicate piano score. It fits with the tone of the story, particularly in the down-trodden second act. Sound effects play their part to punctuate or compliment the movement on screen. Little touches like that do give your brain something more to latch on to than reading text. Whilst is is still a visual novel, there’s some effort taken here to make it stand apart from the crowd.

It’s refreshing to see adaptations like this. Not concerned with absurd premises and rushed romance, A Little Lily Princess takes a tried-and-tested source material and delivers something decently accomplished. Whilst the narrative does stay largely on the rails of the 1905 book, there are chances taken to deviate and enhance the fiction and it’s all presented in a fairly polished manner.

A Little Lily Princess
7 Overall
Pros
+ Adapts an existing piece of fiction and adds well to it.
+ Well-written character events.
+ Smartly presented with a delicate piano soundtrack.
+ Event requirements are clearly marked in advance so you have time to build for them.
Cons
- The main narrative does rigidly follow the 1905 novel.
- Features some Victorian language that might not fly in 2021.
- Can't quite escape some of the genre's tropes.
Summary
A Little Lily Princess takes an old children's novel and breathes some new life into it. With a colourful and polished aesthetic, the cast of characters are interesting and diverse. It does take opportunities to sidestep from the source material but the main narrative rigidly stays the course. Whilst I'm not entirely won over by the stat-building nature, the events and paths this can lead to do give the story some new ground to cover.