Astalon: Tears of the Earth is a 2D roguelike hack and slash platformer from Canadian coders LABS Works which is run by Matt Kap, the developer of Castle in the Darkness.  Set in a dying, post-apocalyptic world the game comes with its fair share of lore.

Three explorers are wandering the desert on a mission to save their town when they find the Tower of Serpents, a very dangerous structure packed full of traps and monsters.  They need to conquer this tower but when we said it was dangerous, we meant it.  Death comes quickly and easily but the trio have made a deal with Epimetheus, the Titan of Death, who grants them infinite retries (for the price of their souls). 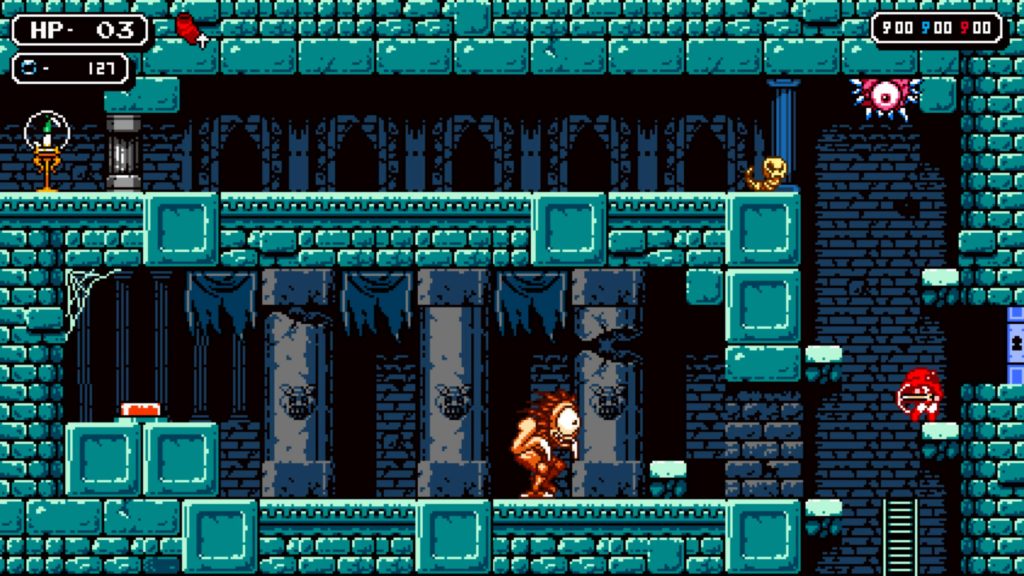 That is where the roguelike aspect of the game comes into play.  When you die, you get to start again and you get to spend any orbs (the game’s currency) on upgrades.  This can be to such stats as health points, damage and attack speed but there is a wider array of upgrades too including a handy ability to hoover up orbs, show useful information on the map and others.  Some aren’t too clear (there’s one about Inner Fire that we’ve purchased and aren’t sure what it does) but there’s a good range of upgrades here.

So if you’re getting Rogue Legacy flashbacks, that makes sense.  Astalon has a similar set up to that except that the levels aren’t randomly generated.  Instead we’ve got a well thought out layout that uses more of a Metroidvania kind of approach with you needing to go back to old areas once you’ve got the ability to unlock certain doors or clear previously unsurmountable obstacles.

Now, we loved Rogue Legacy a lot but this approach is better.  You feel more of a connection to the game world when you get to learn its layout properly and, for us, this gives the game more substance where as in Rogue Legacy we often felt we were brute-forcing the game.  Dying over and over so that we could make incremental gains.  It was great but this approach is arguably better. 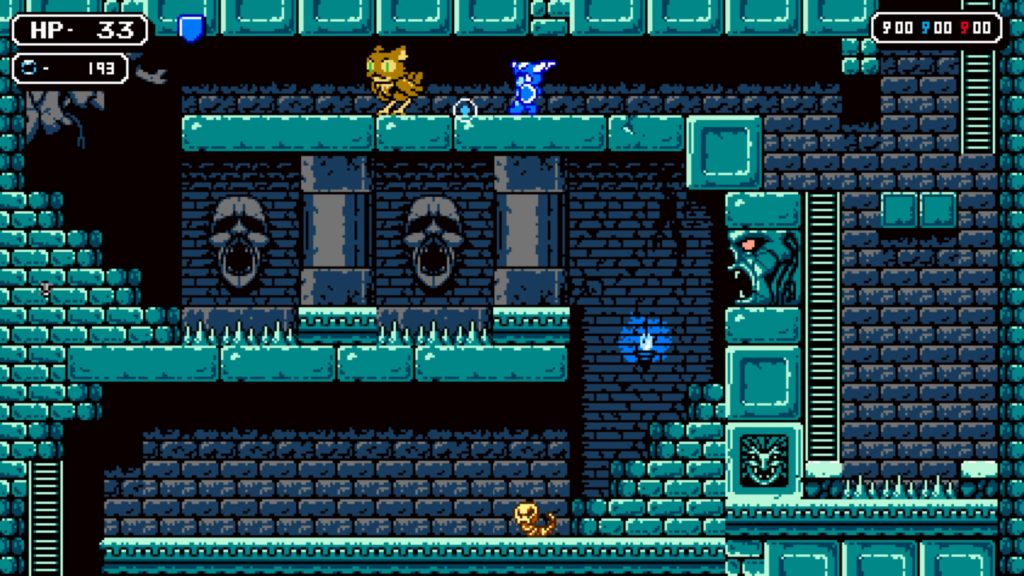 The other thing about Astalon is that it uses three characters.  Initially this was irritating as we expected there to be some sort of co-op but instead this is a single-player experience with you controlling all three characters separately, kind of like The Lost Vikings but with you not being able to switch characters on the fly.  At first it is quite restrictive and frankly a bit annoying having to go back to the group to switch characters to get past an obstacle that needs a certain ability to pass.  But eventually, as you learn the levels and unlock teleporters, it becomes a bit more intuitive.

The three characters all handle in a similar way but have unique traits to them.  Arias is the ‘fighter’ and uses a sword to fight at short range and can open certain doors that the others can’t.  Algus is the ‘wizard’ and has medium range magic bolts that do damage and can activate magic switches which remove stone pillars (basically another type of door).  Kyuli is the ‘rogue’ character and has a long-range but slower firing bow and is able to jump off of surfaces to get higher than the other characters.

All three feel useful though, even if exploration is best with Kyuli, and it is interesting to experiment to see who is best during certain encounters.  Indeed we held off on upgrading the characters individually (which is something you can do) until we knew which one was best set up for the next boss but being able to apply team upgrades means you still get that sweet feeling of progress that roguelites (as opposed to roguelikes) give you. 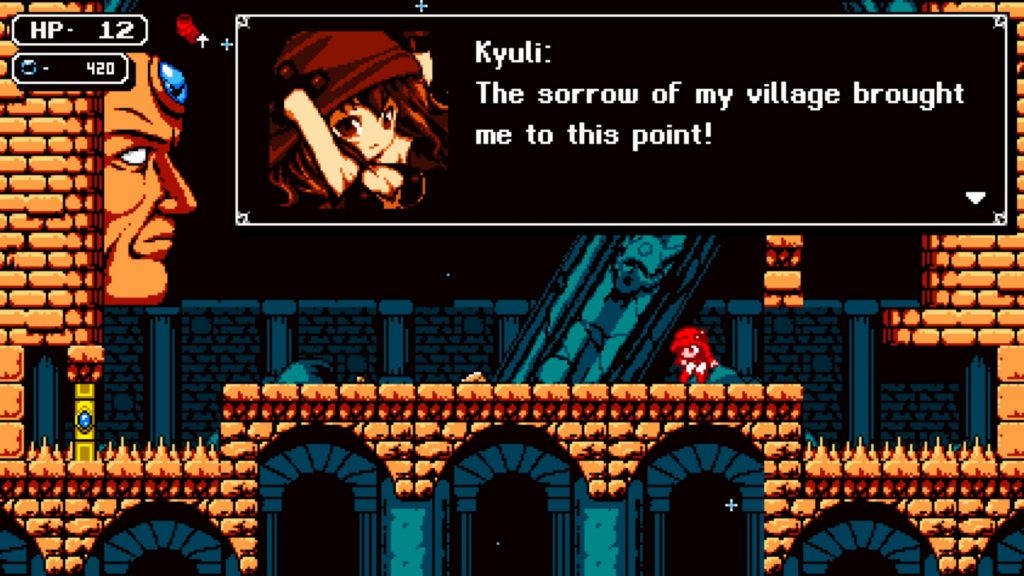 Where Astalon really shines is in its level design.  As we said before, this isn’t randomly generated and that means you do really start to learn the layout.  Generally the way it works is that you’ll get to a door or obstacle that you can’t get past and then you’ll sidetrack around until you find a workaround and then usually after a while you’ll create a shortcut (by opening said door or clearing something).  The levels are pretty big and linked by teleporters.  It can initially all be a bit complicated but the layout never gets too confusing and so you’ve generally always got an idea of where you need to be heading next.

Initially though, we weren’t feeling Astalon (mainly out of annoyance that it didn’t have co-op when it so seems to be a co-op game!) but after an hour or two it really clicked and now we’re loving it.  It’s that good mix of exploration and upgrading but with that more cohesive feel that proper level design gives you.

That said, this isn’t anything new and so it might not wow audiences with its mix of platforming, puzzling and combat and when it is presented in this game’s 8-bit style (with very much a NES resolution and palette), it can initially all seem a bit lazy but if, like us, you find the gameplay to be compelling then there will be plenty to like about Astalon. 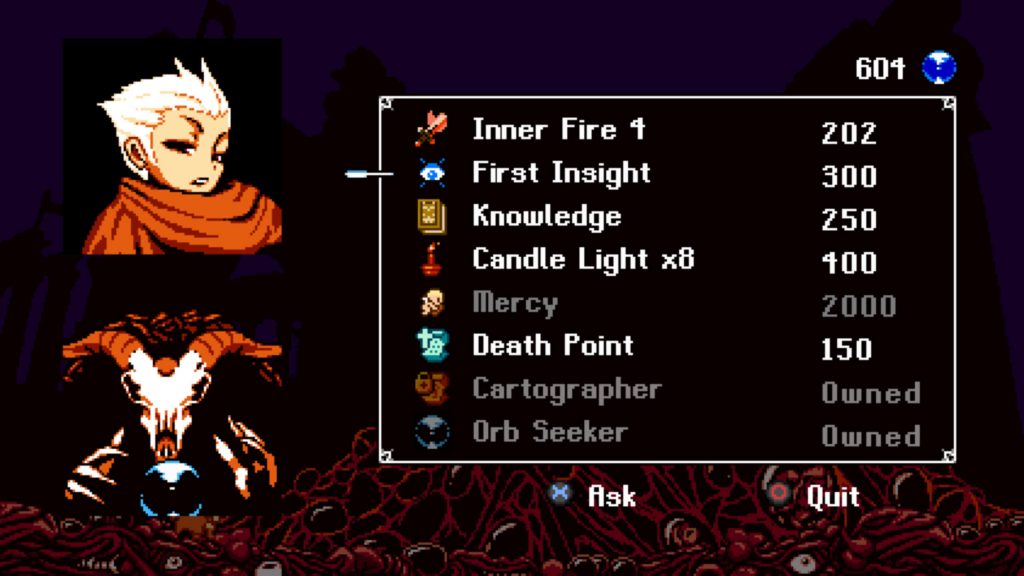 While that aesthetic can seem a bit tired, there’s quite a lot of detail in the game with some good backgrounds and some smart looking sprites.   The accompanying chiptunes also manage to sound well put together despite the dated overall sound.  Again, the game is going for that NES feel and it definitely achieves that although the game would likely be elevated by a more up to date presentation.

In summary though, Astalon has been a nice surprise.  We get a LOT of indie games to review, a lot of 8-bit styled games, a lot of roguelikes, a lot of 2D platformers and so after a while it all just feels a bit samey but once in a while one of these games will have a depth of gameplay that shines through and this game is one of those.  It’s fun to play, addictive and compelling which is all you can really hope for.

Astalon: Tears of the Earth
8 Overall
Pros
+ Smart level design
+ Good upgrading mechanics
+ Enjoyable combat and platforming
+ Plenty of content
+ Does a lot with its otherwise old-fashioned visual style
Cons
- 8-Bit presentation might put off some
- Not particularly original
- Story is presented as a lot of text
- Some minor bugs to be patched out
Summary
Astalon: Tears of the Earth is a hidden indie gem that combines Metroidvania-esque exploration with solid roguelike mechanics to create a game that is addictive, enjoyable and very compelling if you can get past the NES-style presentation.