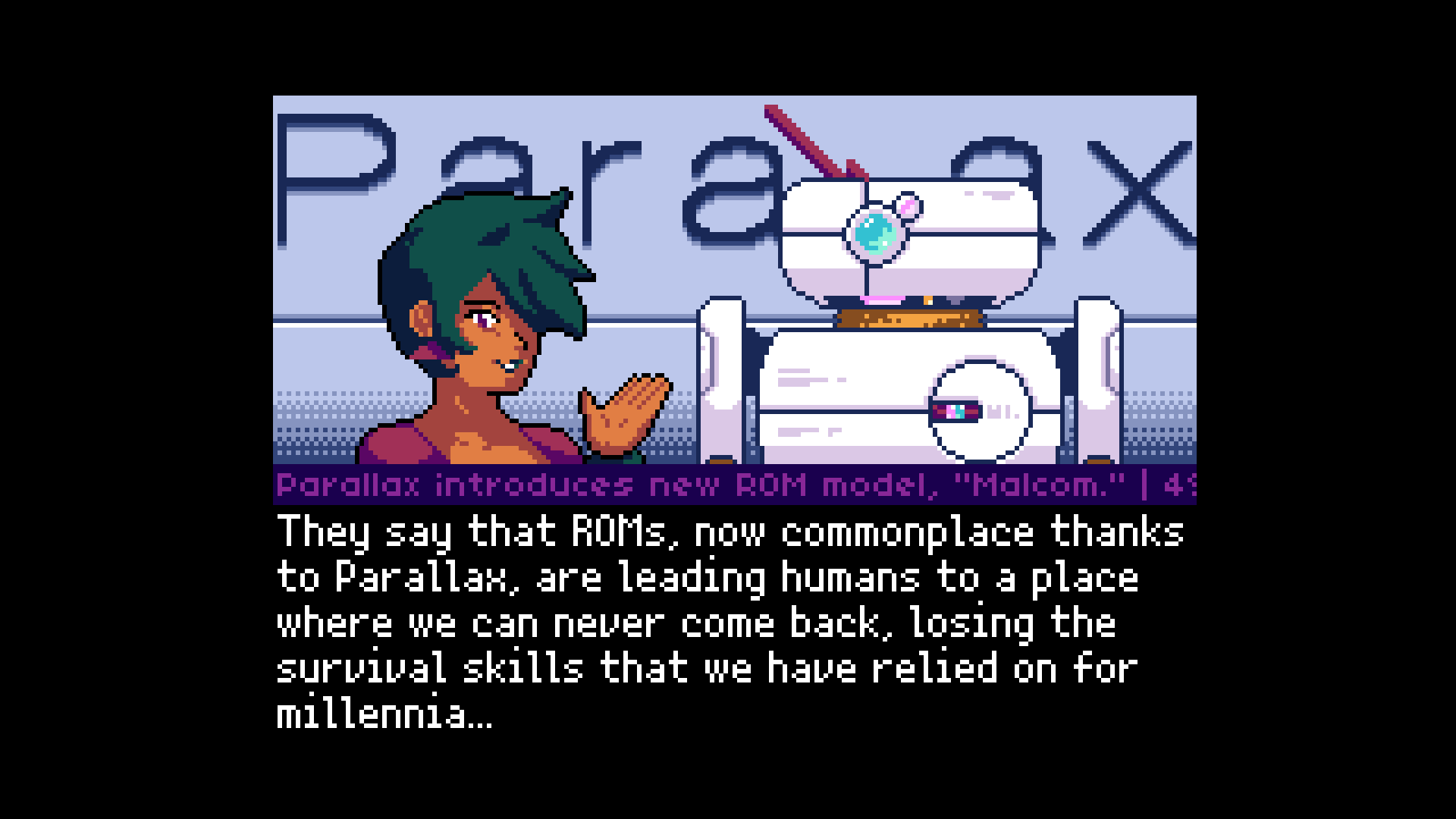 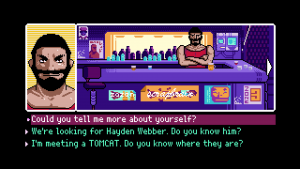 games have had somewhat of a renaissance in recent years and 2064: Read Only Memories is another adventure game. Based in a near cyberpunk future where humans have the ability to genetically modify their bodies and true artificial intelligence has just been discovered, the player character gets dragged into a missing persons case.

Looking like a slice of retro pie straight out of the 1990s adventure gaming 2064: Read Only Memories is visually distinct from a lot of other games out at the moment.  It uses a colour palette which looks straight 16-bit and genuinely looks like it was made in the 1990s.  The game splits the screen in two, with the top part being used for the location being explored and the bottom part being for the script.  It is an odd design choice, but once again highly reminiscent of the adventure games it’s trying to emulate.  The music also seems to be ripped from the 1990s, whilst I found the music to be mostly forgettable the authenticity of the retro style needs to be recognised.

The plot revolves around the kidnapping of a friend who had just developed a true AI called Turing.  One night Turing enlists the player characters help to solve the kidnapping.   The story is set against a backdrop of conflict between the pure humans and the humans who want to continue the onward march of DNA slicing and AI creation.  There is a lot of colour to this backstory and the conflicts it sets up, and this is used well throughout the game. 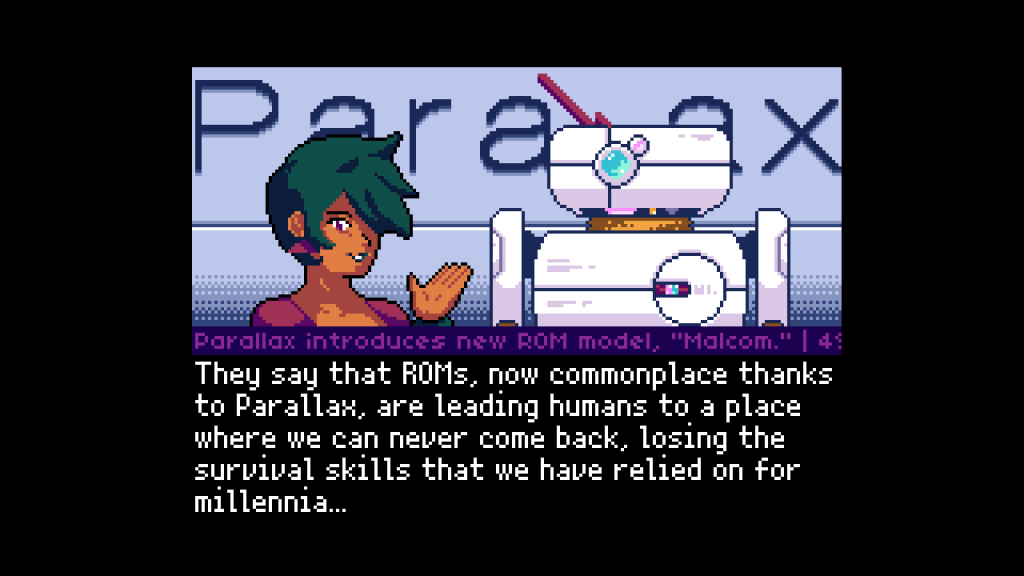 I’ve played a fair few adventure games in my time and each one seems to use a different scheme for handling the interaction.  Some give the player direct control over their character, others rely on a more point and click approach.  2064: Read Only Memories uses a striped back control scheme where interaction is minimal.  Each new area is presented as a mostly static backdrop with the player character never shown on the screen.  There are certain items and points of interest which can be interacted with in each scene and the cursor will move between these pre-set points only.  Whilst this sounds simple there were instances when I found it difficult to read either where the cursor was, or how to move it around to the item I wanted to interact with.  Tiny usability niggles which just frustrated the gameplay.

The puzzles in the game are throwaway and don’t pose any real challenge.  Given the limited nature of interaction points in the game these puzzles offer no real logic challenge.  I found the dialogue puzzles to be more interesting, ones where correct answers needed to be selected, but these still didn’t offer much in the way of challenge.

Whilst the interaction in 2064: Read Only Memories may be limited, the story certainly isn’t.  More than in other adventure games there is an awful lot of story here, and all the main characters are fully voiced.  This gave the game an almost visual novel style feel to it where characters just present plot dumps for minutes at a time.  I found the quantity of dialogue actually confused the tale being told and made it feel oddly long winded when it didn’t need to be.

The script is problematic here and it feels overblown and in need of a good editor.  It feels like the developers have prioritised story over making this enjoyable to experience.  As with the usability issues around selecting interaction points, I found that the text seemed to take just fractionally too long to move on.  I appreciate this is a minor niggle but with the volume of text present here this is a niggle which is ever present.  Sometimes a point is better made succinctly rather than waffling on.  While I’m no script writer I can’t help but feel that a tighter more nuanced script would have benefited this game a lot.

The developers MidBoss have designed this game around the ideal of presenting a queer-inclusive videogame.  MidBoss clearly have a passion about the representation of LGBTQ characters in videogames and have created this game where LGBTQ characters are presented fairly and just as part of normal life.  This is a laudable idea and I’ve previously loved games which challenge the norm of videogame character design.  However I found that 2064: Read Only Memories was very direct in this regard, almost heavy handed at times.  It felt like every new character has a different sexual orientation, and that this variety was first and foremost in the design decisions being made.  What this resulted in was something which felt like it was going out it’s way to be inclusive, when surely a more effective way would have been to let this stuff sit in the background. 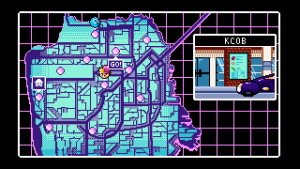 Overall then 2064: Read Only Memories is a difficult game to recommend.  Whilst the story being told is decent, the sheer quantity of text and somewhat overdone approach to sexuality distracts from the actual limited gameplay present.  The art style and presentation of the game is also spectacularly retro, and whilst it stands out from the crowd its not going to be everyone’s cup of tea.

2064: Read Only Memories
5 Overall
Pros
+ There is a decent story at the heart of the game + The presentation of LGBTQ characters is to be lauded + Very retro visuals and design
Cons
- little niggles round selected points of interest and text speed all add up - The puzzles offer no real challenge - Feels like the script could have done with a decent editor - There is very little gameplay present here
Summary
2064: Read Only Memories is a difficult game to recommend. Whilst the story being told is decent, the sheer quantity of text and somewhat overdone approach to sexuality distracts from the actual limited gameplay present. The art style and presentation of the game is also spectacularly retro, and whilst it stands out from the crowd its not going to be everyone’s cup of tea.