From publisher Aquaplus and developer Tamsoft comes a game we’d usually have left for our resident visual novel expert, Gareth. We liked the look of it though, so took a punt. In this case the ZAN subtitle is Japanese for ‘slash’, denoting that this is a departure of sorts from the usual Utawarerumono template.

It’s a hack and slash for the most part a retelling of a previous game. For long term series fans, the plot is a slimmed down version of previous visual novel Utawarerumono: Mask of Deception. Gareth gave that a six a couple of years ago. We’re happy to confirm that we have a game we enjoy playing as opposed to reading reams of text. 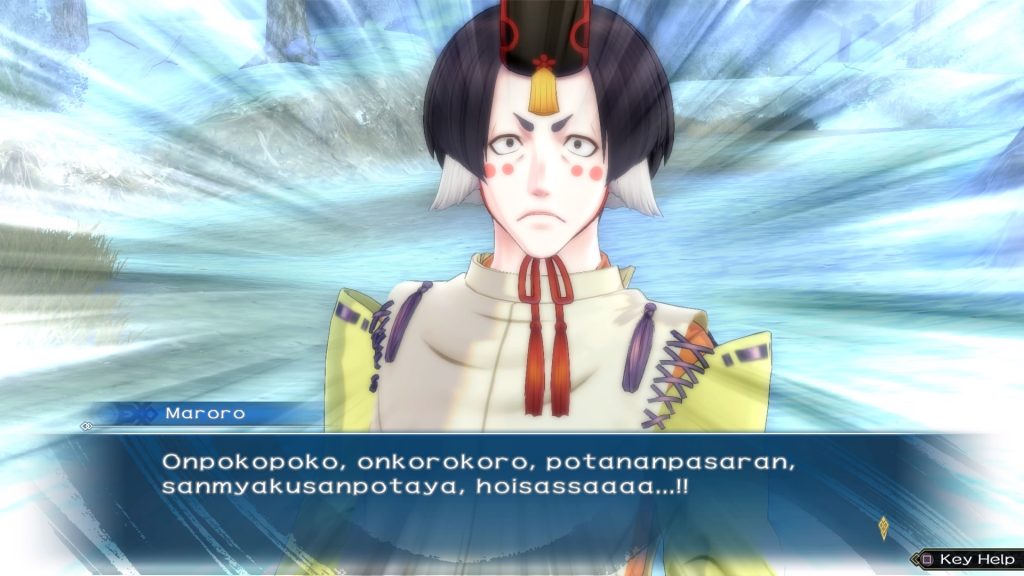 The last time this reviewer did anything like Utawarerumono: ZAN was Steins;Gate Elite. We gave it a seven incurring the wrath of fanboys who missed the point that reviews are by their very nature subjective. Thankfully, from our point of view, uZAN (for the sake of brevity) is more musou game than bishōjo. That’s not to say this is an outright action game as it isn’t.

Some visual novel components remain, only the RTS lite sections have been wholly supplanted by hack and slash sections, reminiscent of the Dynasty Warriors series. The story is broken down into distinct chapters, some being wholly visual novel sections, others being straight into the action. The girls are all doe eyed sylphs, some of them fitting the Tifa Lockhart template, others being a little more demure.

For a Utawarerumono veteran, the plot is no doubt going to make perfect sense to you. However for anyone else including this reviewer, general bafflement is probably going to be the order of the day. That’s not to say it’s bad, it’s frequently amusing if prone to overblown melodrama and cliche. 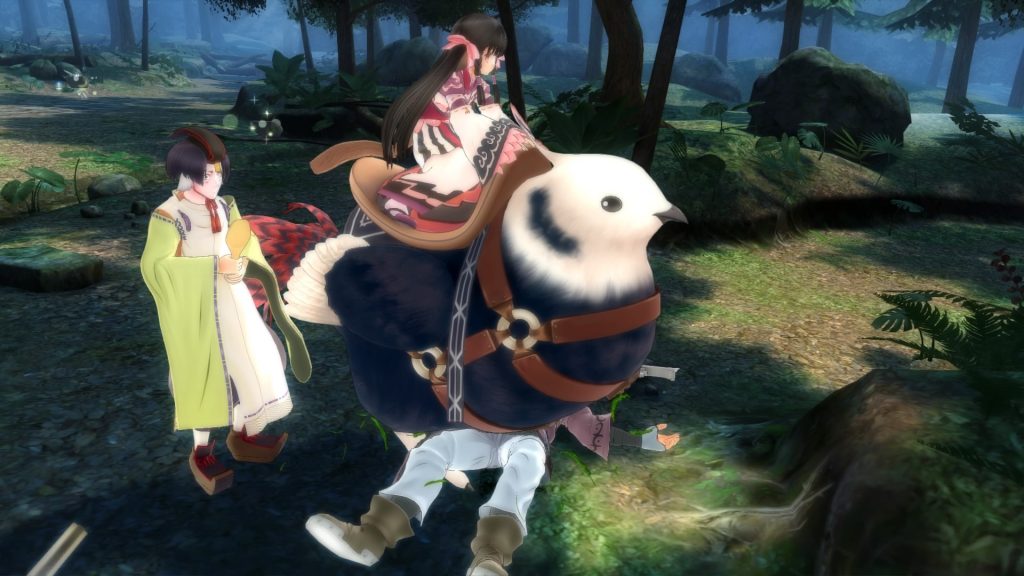 One observation our Gareth had about Mask of Deception was the frequently occurring nudity. Here it’s merely suggested as opposed to overt, just as confrontations between NPCs are hinted at by the dialogue and off-screen sound effects.

Rather than thirty hours+ of typical visual novel storyline, the main plot beats are compressed into eighteen chapters. Of these eighteen, five are scene-setting storyline without any action sequences. The first chapter sees the main protagonist of the piece Haku waking up not knowing who or where he is. A fair bit of exposition follows before the missions start to come thick and fast. 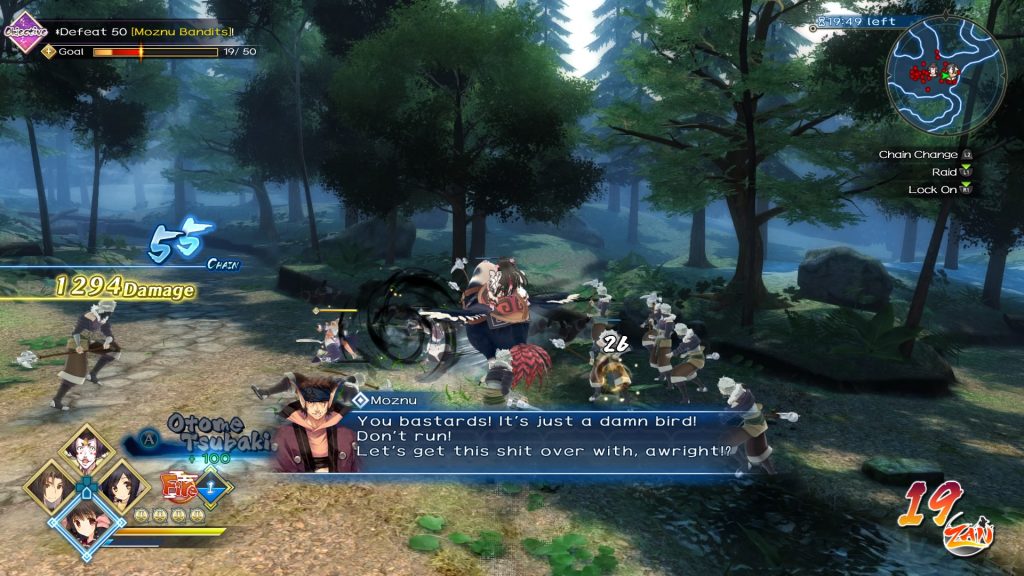 If you’re familiar with the Dynasty Warriors series or perhaps early 360 game Ninety Nine Nights, you’ll  have a good idea what to expect. In the case of uZAN it’s a small party of up to four characters against swathes of enemy combatants.  Some missions have you facing off against a main antagonist, some cropping up on multiple occasions.  The bandit boss Moznu shows up repeatedly and it’s a shame to have to beat him yet again, as his sweary asides would be fun to have along for the ride.

Your standard attack is

, held down it develops into a short charged combo.

is your special attack, generally more destructive but prone to being interrupted by an enemy attack. Both of these charge up a secondary energy bar penned zeal. This can be accessed by

and gives you the ability to chain together multiple attacks and grow your combo meter. You can tap the touch bar to activate overzeal mode which allows you to get bonus zeal from attacks. 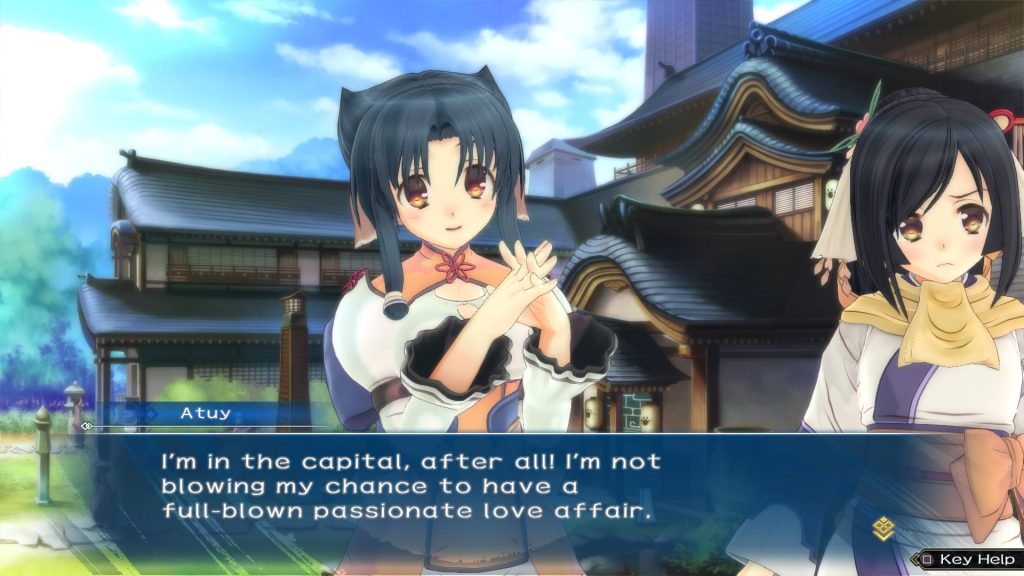 The final piece of your attacking arsenal is the Final Strike that can only be activated with a full zeal bar. As with the standard chain move it can be attacking or healing, but can be devastating in the right circumstances. Put it this way, one character has a special that does an absurd area of effect attack that achieved a ridiculous five times the damage of a standard combo in one instance.  All this makes for a straightforward enough combat system that is simple enough for the casual player but with sufficient nuances for the more seasoned player, especially when you play on hard mode.

The early missions are straightforward enough in terms of easing you into the action, you’d do well to reach a fail state at all. In the event all your characters are incapacitated you’ll get a game over screen, but to be honest it won’t happen very often to you. During our story playthrough we only had two late game missions that gave us any particular trouble. Clicking L1 teleports all party members to your immediate vicinity so in the event you notice one of them is taking more damage than another you can heal up as necessary. If someone is taken out, you’ll be able to revive them by holding 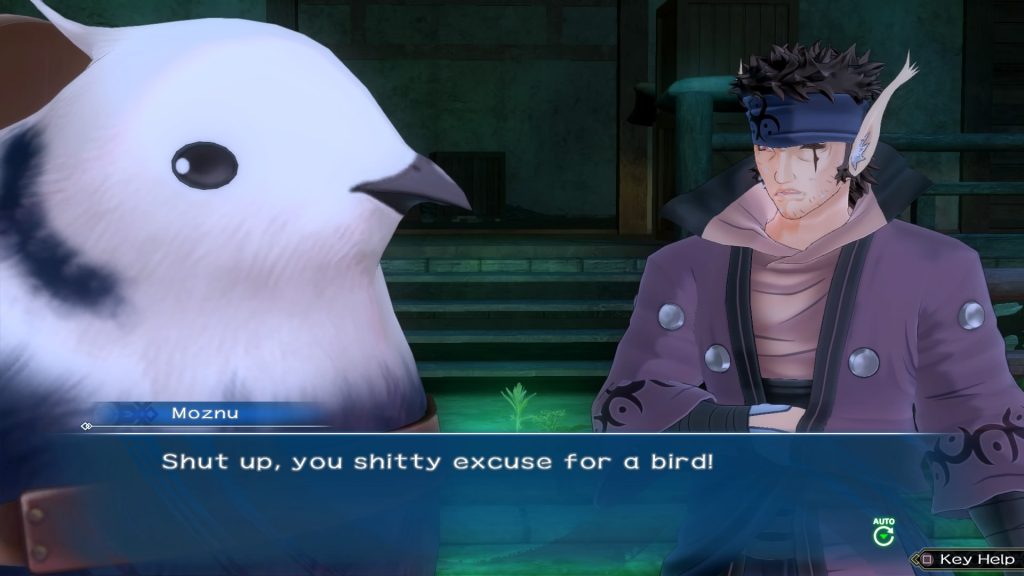 Besides the thirteen in the main story there are twenty five freeplay missions unlocked as you proceed through the storyline. Each set of five has a recommended level cap every ten levels before you try them. You’ll come up short if you try to run before you can walk anyway. Each of these missions has a main goal objective, but to be honest you’d be selling yourself short by missing them out, especially given the generous bonuses on offer for each.

In addition, you unlock the opportunity to get weapon upgrades as well as the ability to increase your individual party members stats such as HP, defence and spirit (aka spell power). However if you don’t use a particular character you’ll end up neglecting their skills as they won’t have any accrued bonus points to charge them up. We recommend frequently rotating characters as you progress by selecting a random party as you play through the freeplay levels as well as the single player campaign replays. 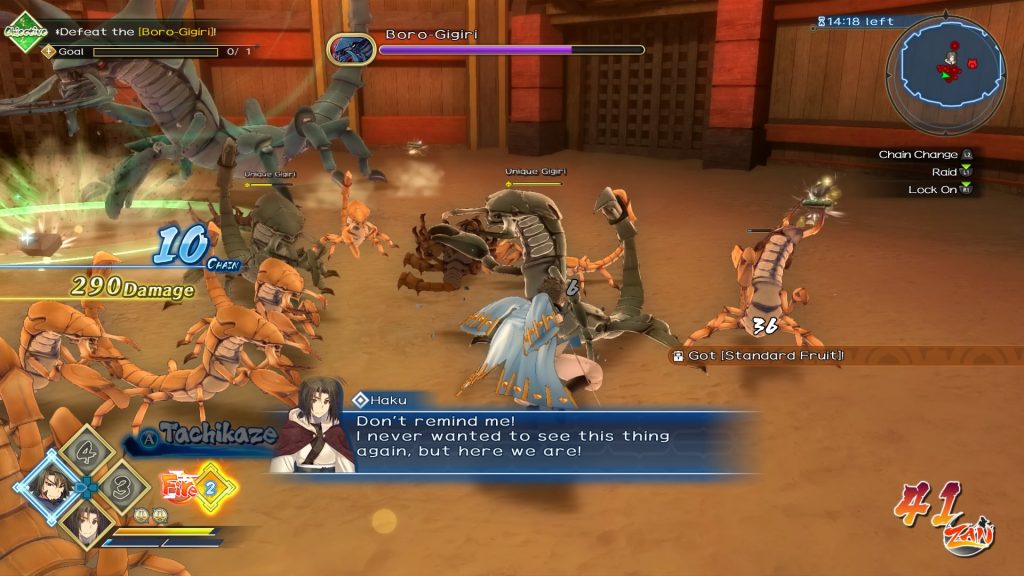 If this sounds like a stats grind, it is effectively. But we found ourselves enjoying playing uZAN despite that. The cycle of finish a mission, check our party for upgrades, check weapon upgrades never really felt like a chore. Just part of making sure we were well prepped for our next battle.

If there’s any negatives the feudal Japanese setting seemed a little at odds with the baffling cryochamber subplot encountered a few missions before the end. Also you’re almost expected to know who the final boss is with minimal explanation. Never mind his transformation into a leviathan shark man behemoth. 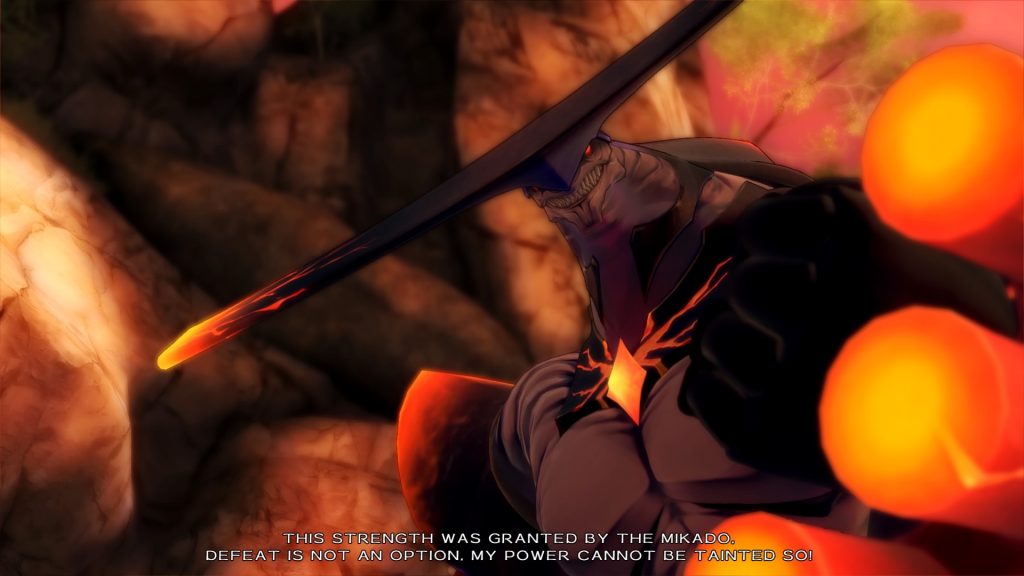 You could just as well stick with the same party throughout the game if you so wished. There is no real incentive to play as the rest of the ever expanding roster of characters, just curiosity on our part if we’re honest.

Battles can occasionally be a little bit hectic with so much action happening on screen.  It can be difficult to tell if you’re inflicting damage barring a stream of numbers floating upward. Thankfully friendly fire isn’t an issue as we’d have a problem otherwise. 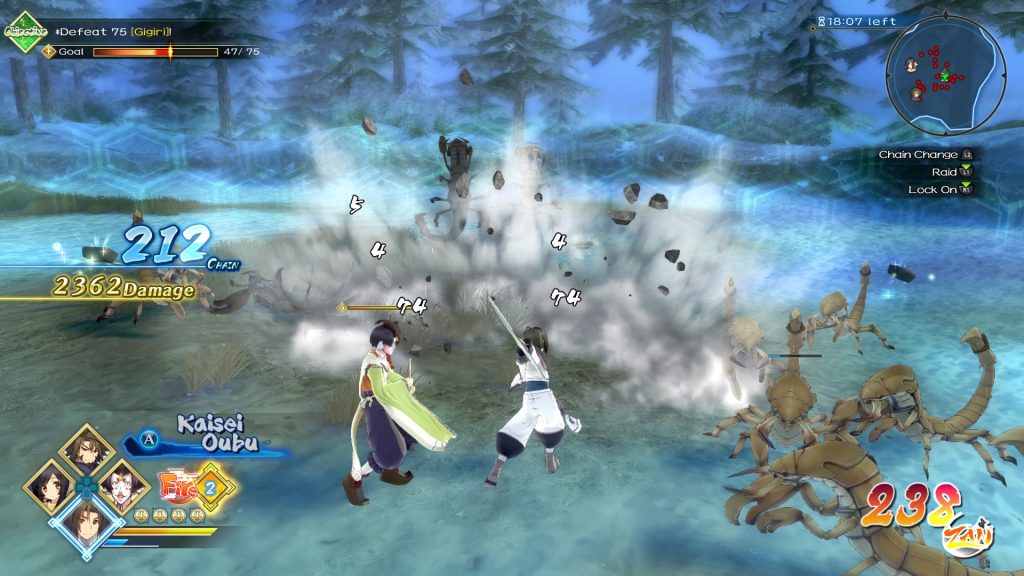 In conclusion here, what we have in Utawarerumono: ZAN is a fair attempt at a musou game, helped by developer Tamsoft having previous in the Senran Kagura series as well as several Onechanbara games. Given the story is a retread of a previous game, it might leave long term series stalwarts feeling a little short changed, but for anyone else this is a worthy introduction to the Utawarerumono series. From our point of view at least, it helps the visual novel component is the junior partner here.

Utawarerumono: ZAN
8 Overall
Pros
+ Combat system is straightforward enough for beginners yet has enough nuance for more seasoned players
+ Tons to do here and fun to do so
+ No sketchy nudie scenes
+ Extra missions flesh out what might otherwise be a slight package
Cons
- Storyline could be a bit confusing to newcomers as well as being a retread
- Some battles can be a bit frantic in terms of what's actually happening
- No particular incentive to play additional characters once unlocked
- The grind is real, especially to 100% the game
Summary
Utawarerumono: ZAN is a great hack and slash introduction to the greater Utawarerumono storyline. Perhaps not one for series purists given it retreads a previous game's plotline.