Steins;Gate Elite is this reviewer’s first encounter with this peculiarly Japanese genre, the visual novel. Steins;Gate was the second game in the Science Adventure series, following on from 2008’s Chaos;Head. For those not familiar with this game type, they are typically text heavy with static images.

Steins;Gate Elite is something of a departure from that perception, being as it is a remake of the original 2009 Xbox 360 game, also developed by 5pb and Nitroplus. That game’s success and subsequent manga and anime adaptations have led to this re-release.  The static images from the original game have been replaced by fully voiced and animated footage originally produced for the anime adaptation. It adds an extra layer of polish that games of this type don’t generally have. 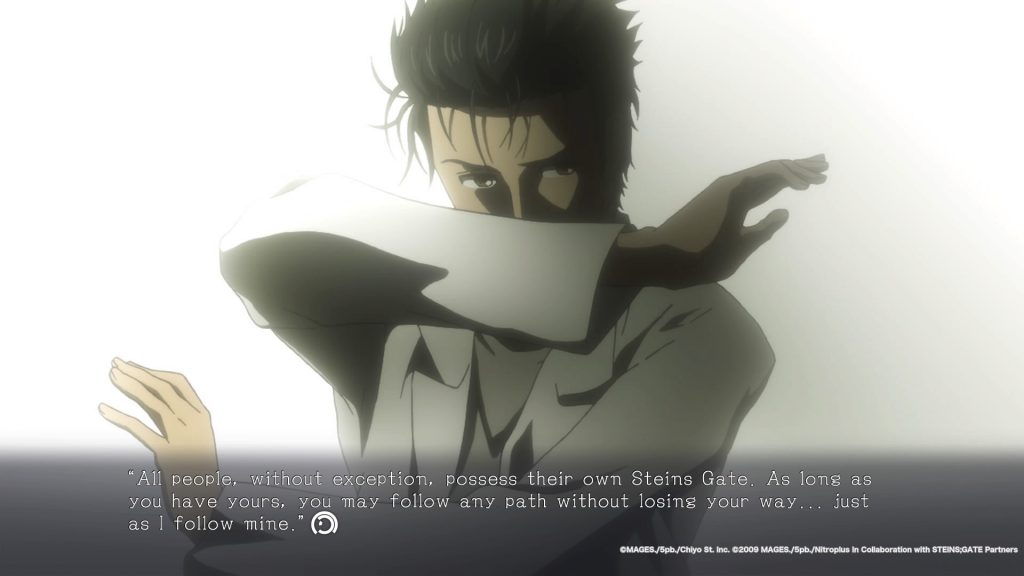 The gameplay stretches the traditional perception of what actually constitutes gameplay though. You’ll spend a great deal of time tapping

to get the next line of dialogue to appear and so your sense of player agency is somewhat diminished. Visual novel is the right term at least, you’re here for the story. The game devs tacitly admit that by letting the story advance automatically when you tap the

The plot of Steins;Gate revolves around our man Okarin (a portmanteau derived from Okabe Rintaro) and his self-named Future Gadget Laboratory, staffed by a collection of oddballs and misfits you’ll meet along the way in the story. The gadgets he’s come up with so far have been generally useless until he discovers a microwave with a mobile phone strapped to it can teleport some items. No real practical use given it’s still a microwave and the items generally end up being transmuted or destroyed in the process. 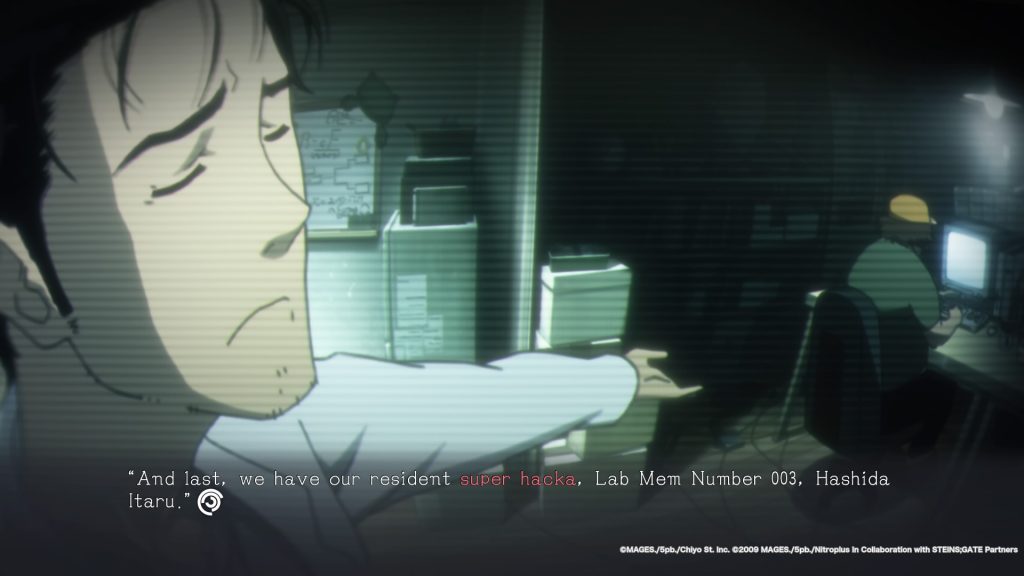 After receiving a phone message on his phone during the process there appears to be some sort of skip in time. It’s all quite silly and ties into the real world urban legend of John Titor and alternate timelines. And boy are there a lot of alternate timelines as you’ll discover.

There’s a branching storyline of sorts, affected by your replying to text message or emails on your phone. And that’s pretty much it gameplay-wise. There’s no QTEs here (we never thought we’d bemoan their absence) nor are there any sorts of puzzles.  Your sole aim is to see the story out, your phone interactions leading to one of several ultimate game endings and yet despite this, we couldn’t tear ourselves away. 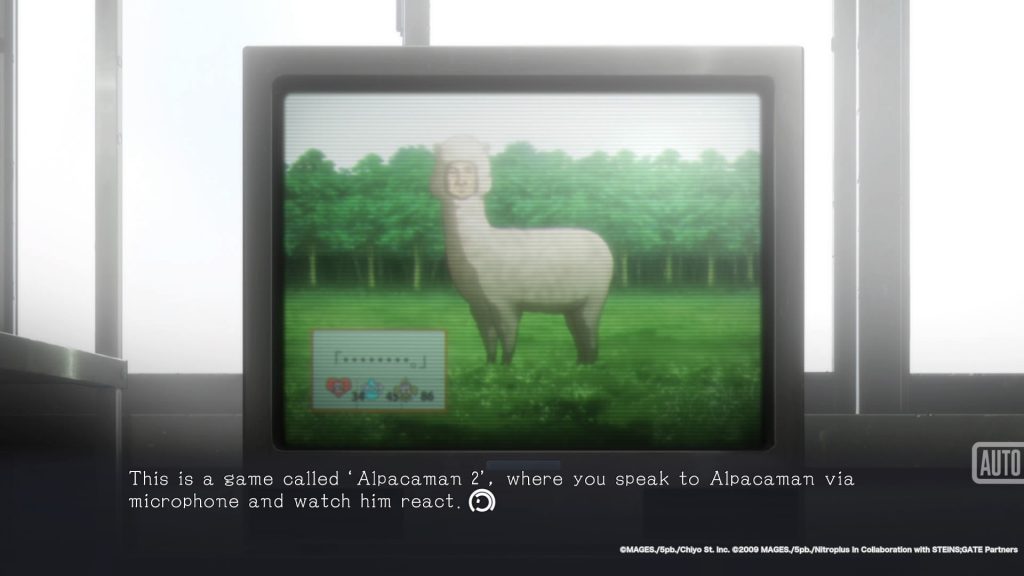 The scripting and localised subtitles are frequently amusing and often pretty funny, along with pastiches of games and Otaku culture, including the Dreamcast game Seaman except instead of a weird fish guy that hates you, there’s an alpaca that treats you with equal disdain instead. Quite niche, definitely a gag we’d not have expected to see anyway.

In addition to the already generous game on offer, there’s thirty+ additional hours gameplay included via a download code in the physical release. This gives you backstory for ten characters in the game.  For fans of the genre and Steins;Gate fans otherwise, we can’t see this package as anything other than cracking value. 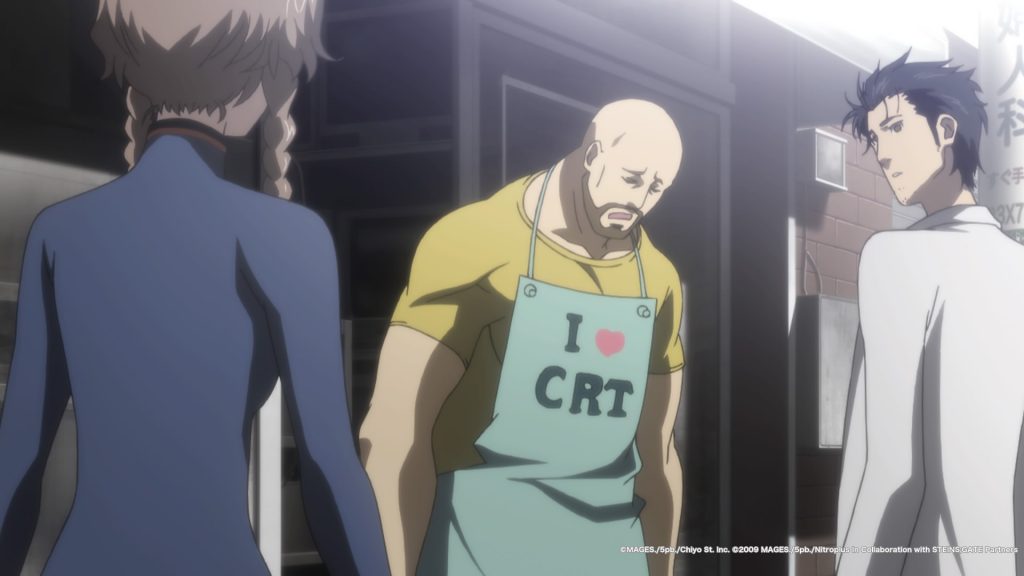 For anyone else, it’s a mildly diverting glimpse at a genre the western market doesn’t really get to see much of, other than on the Switch online store anyway. The plot is genuinely engaging and you’ll grow to like most of the characters, especially the main protagonist Okarin AKA the self styled mad scientist Kyouma Hououin. He’s got a good line in maniacal laughter too. The female cast don’t really deviate from the archetypal cute girl with big eyes and salon beautiful hair though, that’s fairly typical of anime though, not so much a failing of Steins;Gate. 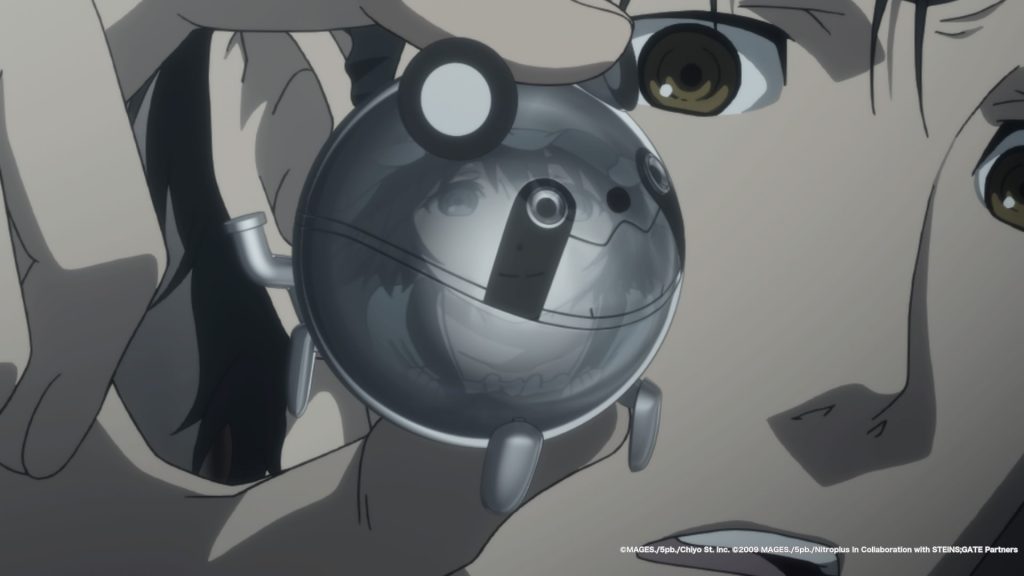 All told, Steins;Gate Elite is a fun anime themed game that will be sure to appeal to fans of the anime and genre. Anyone else is likely to dismiss it. It’s definitely worth considering despite that.

Steins;Gate Elite
7 Overall
Pros
+ Good plot and frequently amusing storyline
+ Anime quality video and voice acting, you're effectively playing the anime
+ Great value for fans of the series and those familiar with visual novels
+ You can crack on immediately as the game doesn't seem to install much at the outset
Cons
- Thirty hours is a lot of hitting the X button with minimal reward
- Gameplay is lacking in the normal sense
- Perhaps a little expensive on release to take a punt on
Summary
Stein's Gate; Elite is a quality anime remake of a ten year old Xbox 360 game you should consider checking out if you're a fan of the visual novel genre or Otaku culture in general.