Ultimate Fishing Simulator from developer Bit Golem in conjunction with joint publishers Console Labs and Ultimate Games is pretty much exactly what it says. It’s a fishing simulator in a variety of locations where you… fish. The well used Unity engine does a fair job of depicting the locales in which you’ll ply your trade.

Before you even cast your first line, go to the options menu and switch off the music. It’s elevator muzak at best and we tired within a few minutes even with it at low volume. It was so bad we half expected Ed Sheeran to start singing on top of it. Put on your favourite Spotify playlist or turn on the radio instead. You’re welcome. 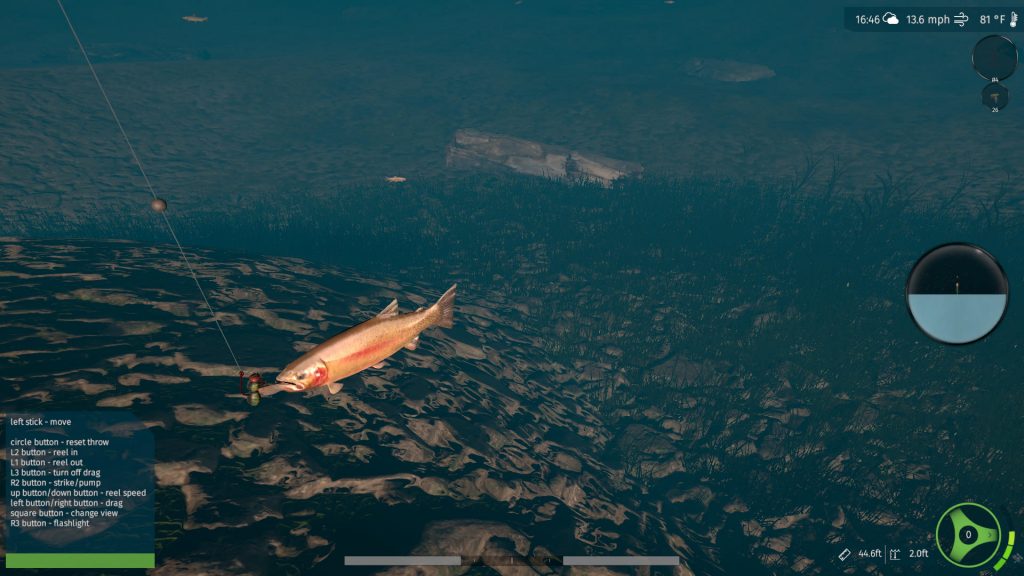 Upon starting you’ll be fair bombarded with the various mechanics, but to be honest you’ll be probably be alright if you skip through like we did. The key mechanic is casting is initiated by

, the longer you hold it, the further you’ll cast your line. You can cast short with a tap of

if you have a fish directly adjacent too. You can let your line out with

and when you get a bite, reel in with

. This is complicated by the fact that the larger fish will make a fight of it and put tension on your line. If you’re not careful to manage this tension, it’s almost guaranteed to snap. But eventually you’ll get the hang of it and be landing fish with abandon. 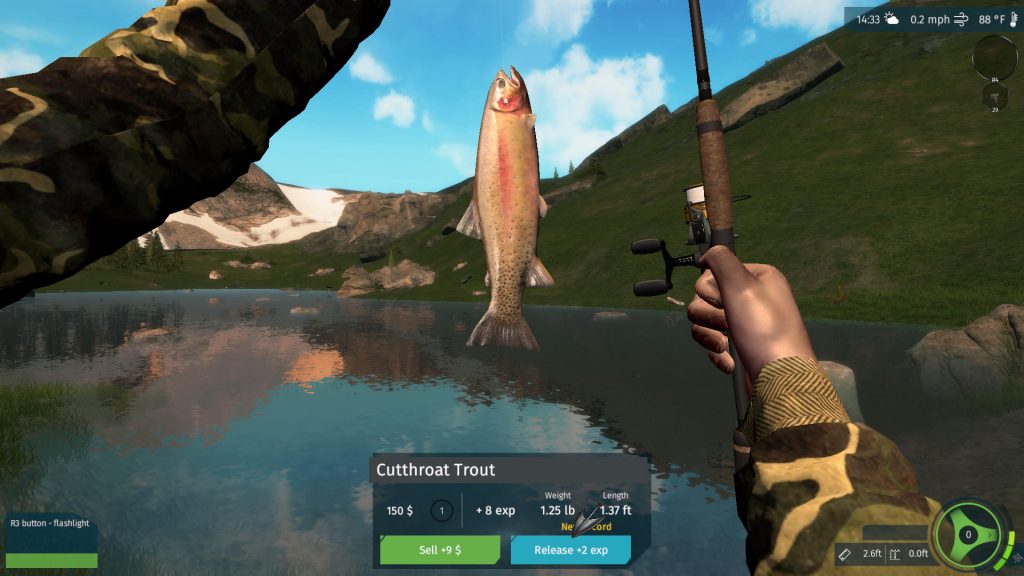 Then it becomes a waiting game like most fishing is in reality. At the outset you’ll be able to catch most, if not all the fish in your first area, Betty Lake. It might sound like a fifties era pin-up, but it’s actually a real lake in Colorado. Trout is on the menu here, five distinct varieties in fact. Rainbow, brown, brook, bull  and cutthroat. If you know fish you’ll probably be excited. Personally, we were baffled there we so many varieties in one location.

The remaining locations are spread across the Americas, Europe and Africa. Some of the locations such as Betty Lake and Lake Baikal in Russia also have alternate winter locations, but you’ll need to have unlocked the ability to hack a hole in the ice with an auger. In addition, each of the successive locations are gated by your level and your cash reserves. 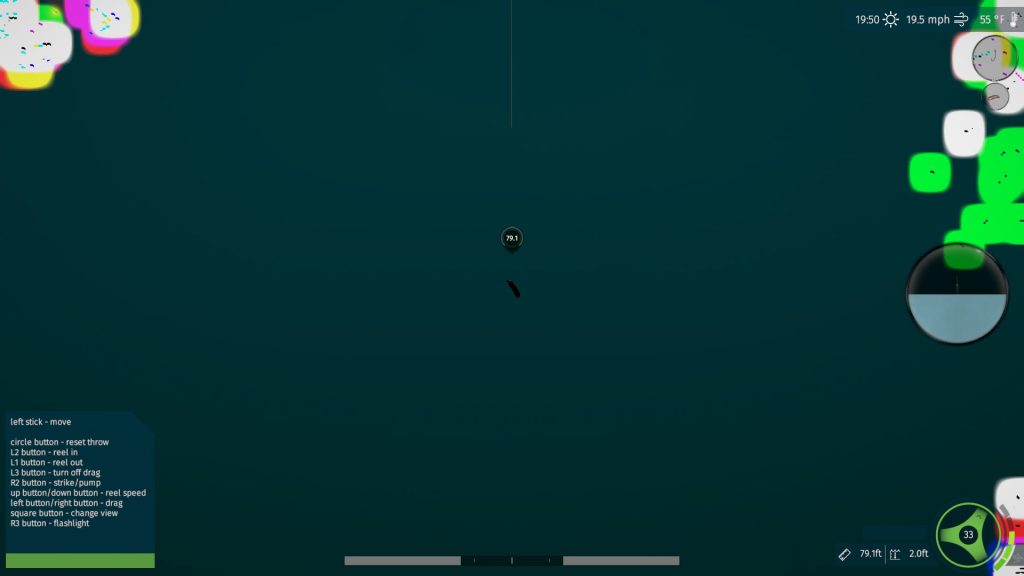 The default view is down your rod and you’ll spend an inordinate amount of time waiting for bites on your bait. You can switch to an alternate bait view with

but this is almost as boring and oddly glitchy, especially in low light conditions. We initially thought it might have been an incompatibility on our PS5, but the glitch manifested itself on our base PS4 too. Never mind the frame rate seemed to be dipping into single figures on occasion there.

For a non-fisherman like ourselves, you’ll reach a point when you wonder if you’re ever going to catch a damn thing after an initial flurry of activity. For us, this was on Powell Lake after we’d caught a few tasty bass. Then you’ll realise that not all bait is good for all fish and start to experiment.  You can also swap out hooks and different floats, but other than some perfunctory tutorial text and limited information in the help menu, the mechanics are pretty obtuse to someone not familiar with real life fishing. There’s very much the assumption that players of this are going to be up to speed with fishing and it can prove frustrating when you’re not. 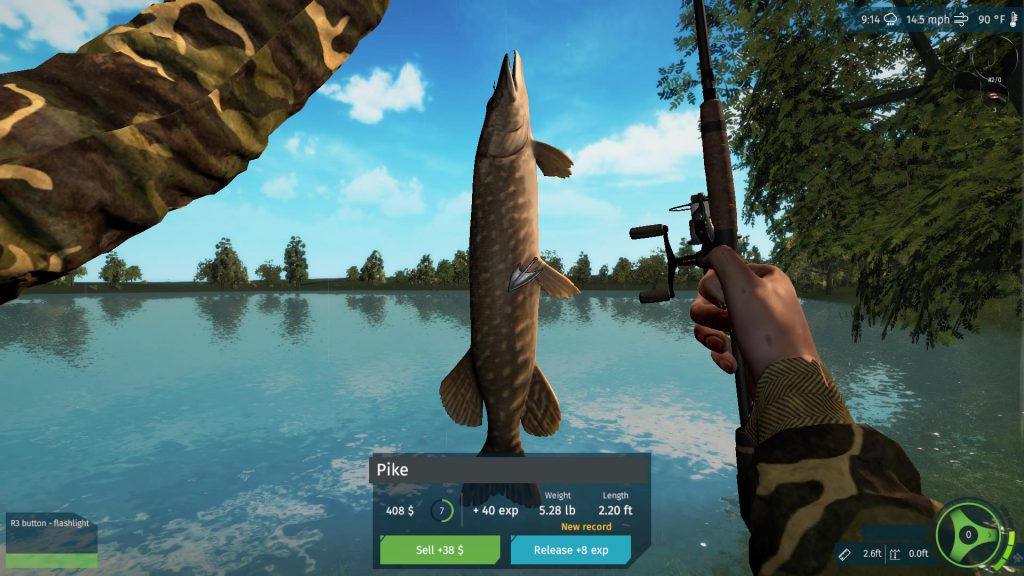 Yet despite the functional presentation and the oblique nature of the game, we found ourselves compelled to keep on fishing. Ten plus hours and counting. Eventually all good things come to an end and we found ourselves hitting a virtual wall. We somehow managed to catch a sturgeon and almost reached a sufficient level of proficiency. But we grew frustrated at the limited loadout ability. You only get one rod and reel and if you want to catch different fish sizes you have to manually swap out your equipment. 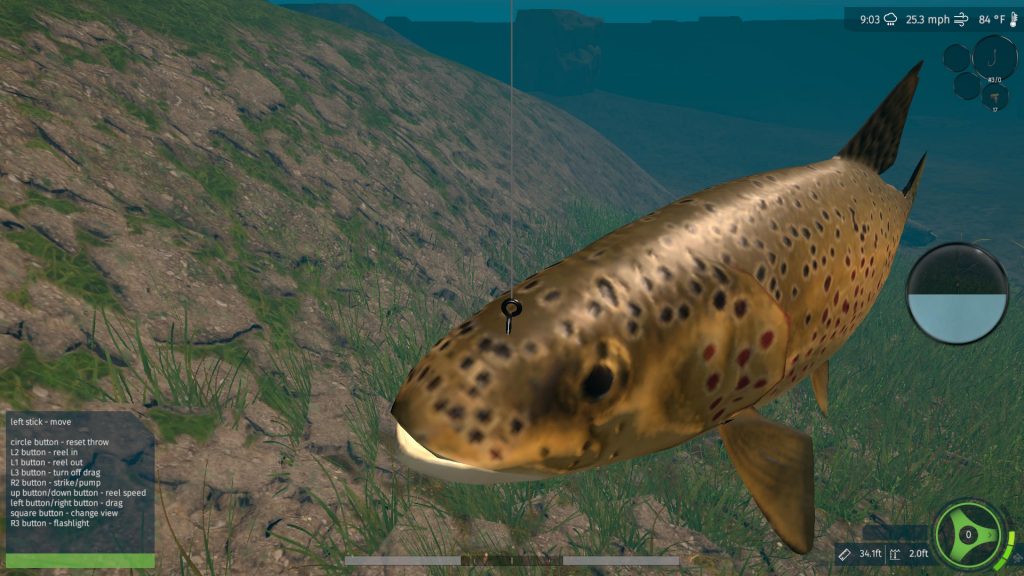 The ability to create multiple custom loadouts without actually needing to buy multiple rods would be helpful in the early stages, especially while you’re operating on a somewhat hand to mouth basis. You have the choice to either sell your fish or release them for a small extra experience boost, but when you’re struggling to make enough money to cover your bait costs, you won’t really be in the position to have the luxury of extra equipment beyond that which you already have. Compounded with the fact you’ll have to spend your hard earned money on permits to unlock subsequent fishing areas, it’s hard not to feel a little hard done by. 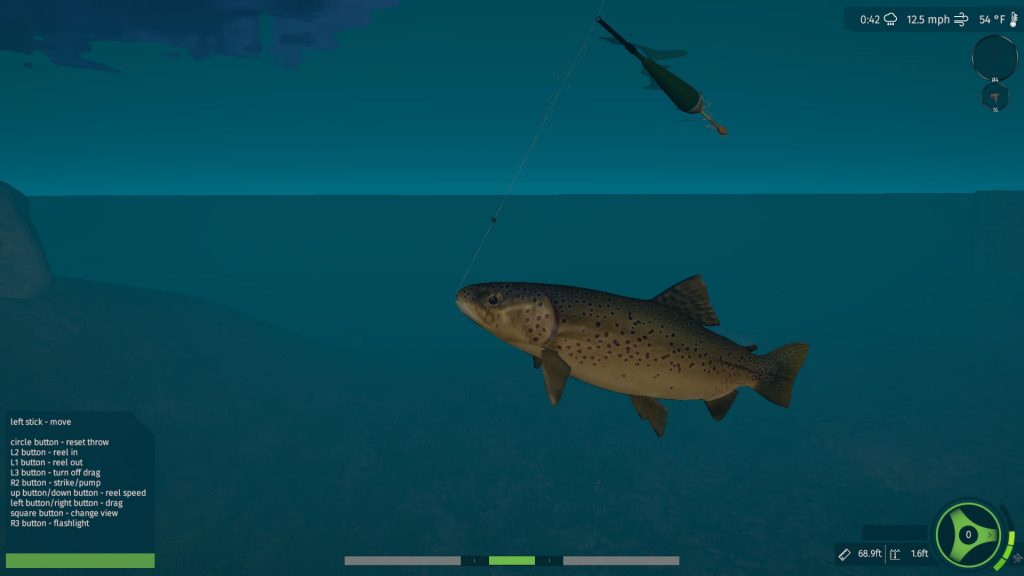 At least Ultimate Fishing Simulator doesn’t pull the trick of penalising you unduly for catching a fish with the wrong size hook, unlike a certain hunting simulator sequel we had the misfortune to review. It does come across as a bit unforgiving though. Apart from the larger fish whose silhouettes you might see, you’ll have a hard time tracking down specific fish species other than by catching them.

You’re helpfully told what fish like which bait type, but the fact that some fish will merrily slurp down your bait and you’ll barely get enough back to cover your expenses, you’ll be more saying sea bastard than exhorting crucian carpe diem. You often won’t have much idea as to what hook size to use for the right fish type, let alone where to cast your line to find a particular fish. The whitefish still eludes us, put it that way. The game’s roots on PC come to light a little in the fiddly cursor you have to select your loadout with. You can turn on sticky cursor but it didn’t really help as the menu fine control simply isn’t there. 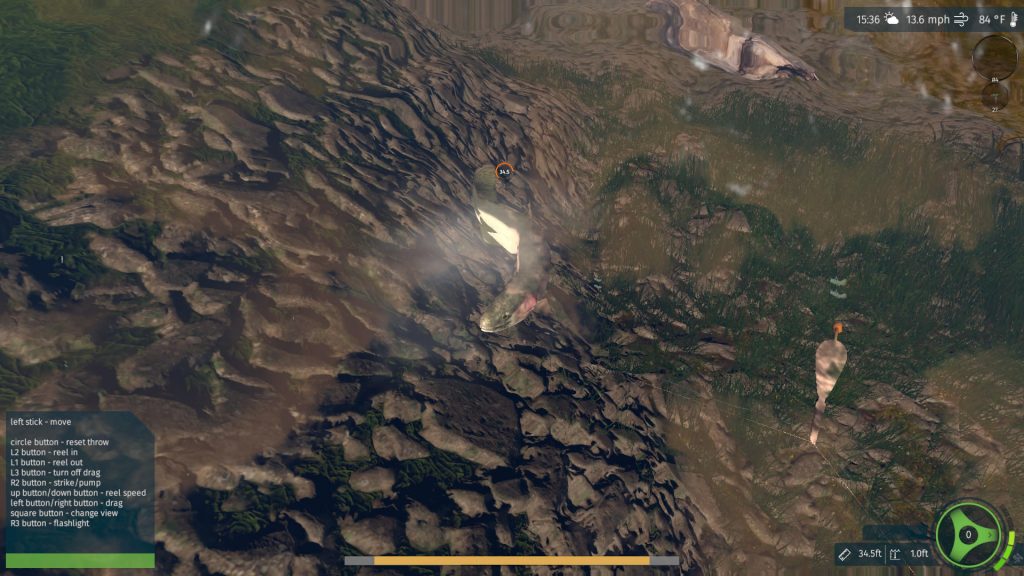 Ultimate Fishing Simulator might be a bold claim, but throughout its multiple stages you’ll have the option to try out many different fishing techniques, assuming you have enough virtual cash at least. The varied locations are fun and we expect we’ll come back to play from time to time, but for many it won’t exactly set the pulse racing. A few extra concessions to the novice fisherman might help elevate the game, but to steal a pun from Animal Crossing, Ultimate Fishing Simulator isn’t so much as sea bass, as a C+. Perhaps a future patch will remedy matters, but we suspect it won’t.

Ultimate Fishing Simulator
7 Overall
Pros
+ Varied fishing locations
+ Lots of fish varieties
+ All the fun of fishing without having to leave your couch
+ Many and varied fishing types to master
+ How much is the fish?
Cons
- Perhaps a little unforgiving to the novice
- Inability to have multiple loadouts can feel a chore
- Strange underwater glitches especially at night
- Menus are a pain to navigate with insensitive cursor
- The muzak is awful

Summary
Ultimate Fishing Simulator is very much as advertised. Perhaps a little on the dry side for the novice as it does expect a level of familiarity to some of the mechanics. Somehow compulsive to play, if a little rough around the edges. Maybe not so ultimate as more super.