Rigid Force Redux is a horizontally-scrolling shoot ’em up from confusingly named German indie coders ‘com8com1’ and is a console port of their earlier PC release Rigid Force Alpha.  As you can see from the screenshots this is an arcade style title which evokes memories of shoot ’em ups from the ’80s and ’90s and is certainly a game that wears its influences on its sleeve.

Once you get past the game’s oddly lengthy cutscenes (these can thankfully be disabled in the game’s main menu), the action is exactly what you’d expect from this type of game.  You’re mostly on the left side of the screen and your enemies on mostly on the right.  You need to blast them out of the sky before they do the same to you.  Thankfully, you’re in a fairly powerful ship and you’ve got quite a good range of systems with which to deal with the enemy threat. 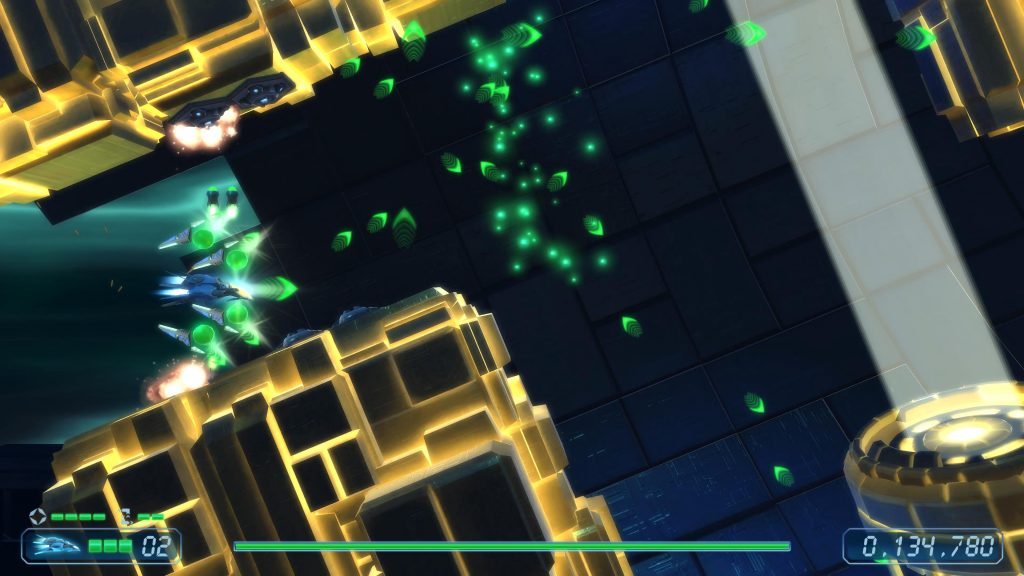 Essentially the game riffs mostly on the format of the R-Type games.  You start off relatively underpowered but before long you’ll find power ups and these will give you one of three weapon types.  You’ve got your damage-focused upgrade, your spread fire gun and your bounce laser and these can all be improved by picking up other power ups that add ‘option’ type turrets that, in true R-Type fashion, will multiply your firepower and act as defensive objects too.

What’s good though is that by using the shoulder buttons, you can reposition these option turrets which allows you to focus your fire in a forward direction, spread it out to take out targets above and below you or even focus them backwards which is occasionally useful.  While R-Type allowed you to put your ‘Force’ turret behind you, this is a bit more sophisticated. 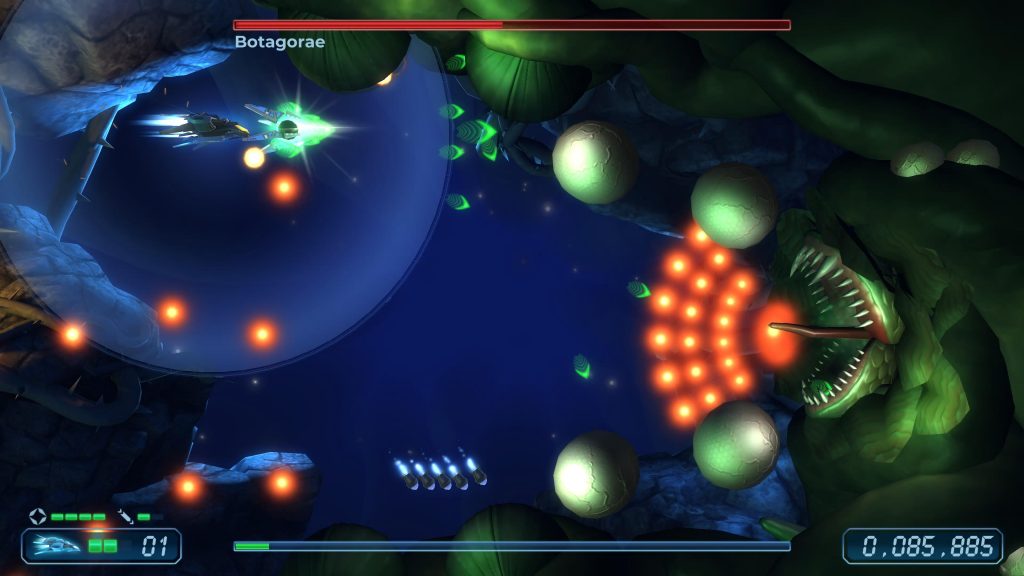 However, to really judge a shoot ’em you have to break it down in a way that our reviews don’t usually get formatted but stick with me.  A shoot ’em up is judged in a few categories.  How interesting, and exciting, are your firepower options.  Well, as we’ve said, they are pretty good.  The only issue is that sometimes you feel overpowered for 95% of a level but there will be one or two moments where death can be quite cheap and this can lead to you suddenly continuing your offense against the enemy armed with just the default weapon.  R-Type was awful for this and Rigid Force Redux isn’t as bad.  So in this category, if we’re going with bad, good or excellent, we’d say the game is good.

Then you’ve got level design.  We judge this by variety, creativity and by the impact of any cool set pieces.  Again, the game does well here but isn’t excellent.  The game has six levels, which is just about enough, but there isn’t much in terms of moments that stick out.  It’s all very by the numbers in terms of backdrop types and the things you’d expect to see are all there.  The big wheels (see below), the occasional vertical section and of course you’ve got your boss battles.  What we did like it the checkpointing and the fact that credits don’t restart you back at the beginning of the level.  Also, while there are moments where you need to remember the layout, these are very rare and not nearly as fiddly as the later levels of R-Type. 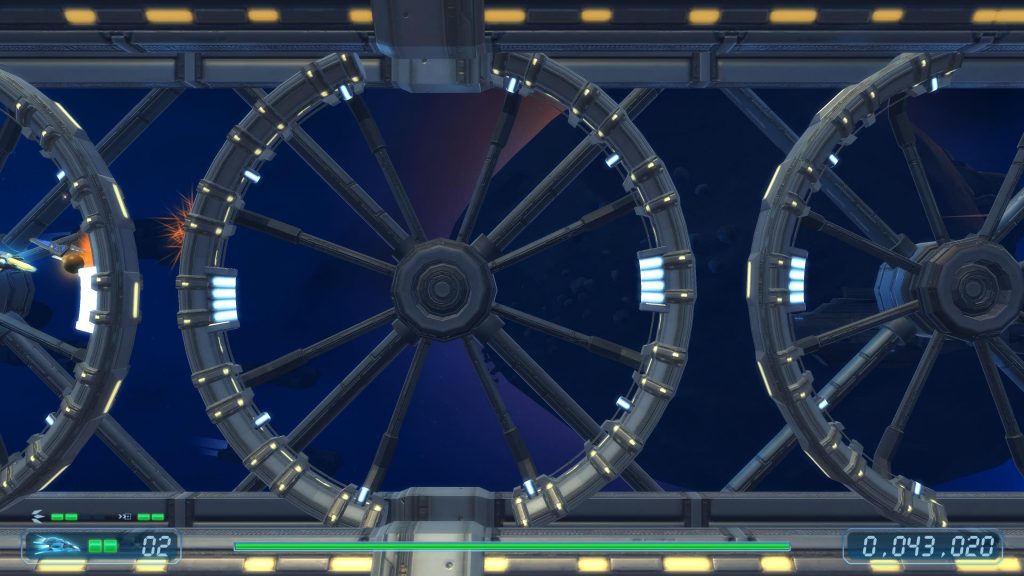 The boss battles are very generic.  Big ships, big biomechanical beasts.  Again, it’s very R-Type but also reminds us of really generic shoot ’em ups like Side Arms.  Thankfully, the boss battles are fairer than we’ve become accustomed to from this genre, so you won’t be there hanging on your last nerve for five minutes as you pick away at their health.

In terms of graphics, and presentation generally, again the game is pretty good but not amazing.  Having recently reviewed Soldner X2, our expectations for visuals are much higher than what Rigid Force Redux is giving us (and remember, that was a remaster of a PS3 game).  The game looks fine but there’s nothing spectacular here.  The levels all look very simple, with lots of repetition, and the enemies are very plain and generic.  There’s never a moment where the screen is just full of firepower in an impressive way but again, there’s nothing bad about it either. 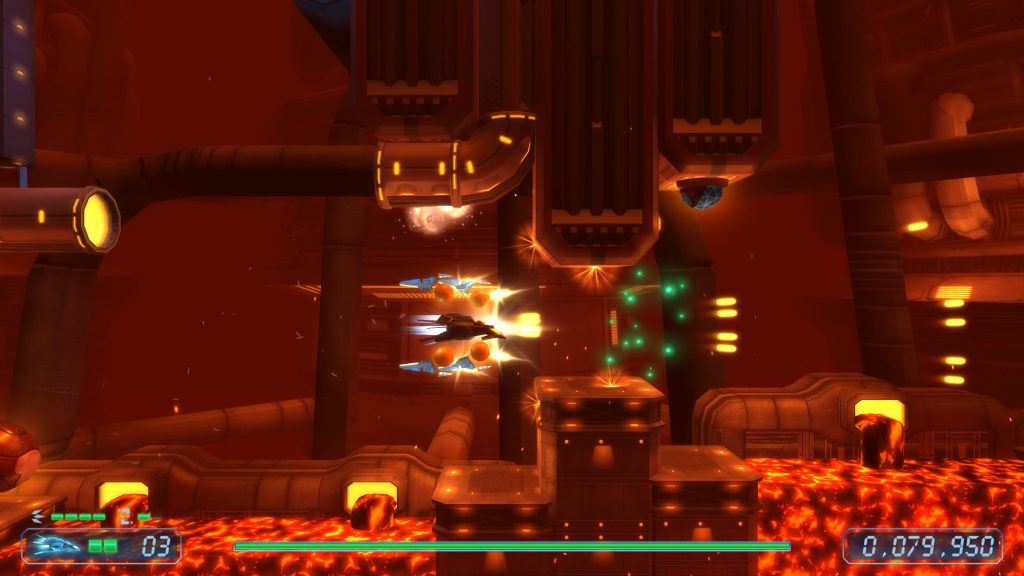 What we did like is that when you beat a level, it becomes available in Arcade Mode and this adds a few wrinkles to the game including a score multiplier system, spacemen to rescue and bombs to locate and destroy.  It makes the game better and we actually wonder why there’s even a Story mode here (and why it gets top billing).  We had a lot more fun playing Arcade Mode (even though it’s 95% the same experience) because it pushed us a bit more to play better, as well as more tactically.

Overall, this is a good, competent shoot ’em up.  It won’t win any points for originality and because of that we’d have liked to have seen more refinement in the gameplay and presentation.  But it’s never bad either.  We’ve got some concerns over the difficulty curve (for example, stage five gave us trouble but we sailed through stage six without any problems at all) but as an overall package, Rigid Force Redux is one of your better options on PSN if you’re looking for an old-school shoot ’em up.

Cons
- Doesn't excel in any department
- Very average visuals
- Very generic and unoriginal
- Story feels unnecessary
Summary
Rigid Force Redux is a decent R-Type clone but one that plays it very safe and as such never really does anything to make it stand out.