PlayStation gamers were never able to play the original 2013 Hammerwatch, a hack and slasher from Swedish (not Danish!) coding squad, Crackshell.  They have however just dropped 2018’s Heroes of Hammerwatch on us, a game that takes the original hacking and slashing but builds quite a complex upgrading system behind the action.

Oddly, for a game with RPG trappings, there’s no story to speak of to get you going and indeed the game doesn’t really explain much at all and rather throws you into it.  You begin the game by selecting a class and creating your character (there are a few customisation options open to you originally) and then you’re put into the Outpost, your main hub world where various NPCs, merchants and the like, have set up shop. 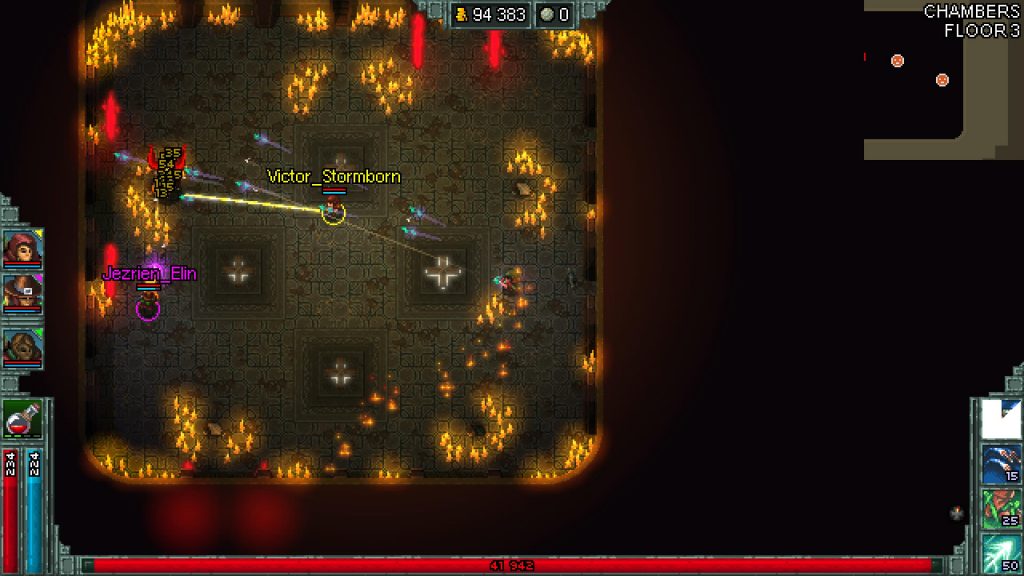 Initially it’s not entirely clear what you need to do here and we’re not writing tutorials here at PlayStation Country but what you’ve got is a Town Hall and when you upgrade that it makes new traders available.  These sometimes have to be found out in the game world first or just purchased but these NPCs allow you to upgrade your character with permanent boosts to armour, combat and secondary skills.

The Blacksmith, for example, lets you upgrade your weapons and armour while the Guild lets you upgrade your skills which are your basic attacks and some passive buffs too.  The Preacher also allows you to upgrade your attack and defence as well as other things such as health regen.  The only real issue here is that they’re all basically upgrading the same things in a way:  how much damage you do and how much you take. 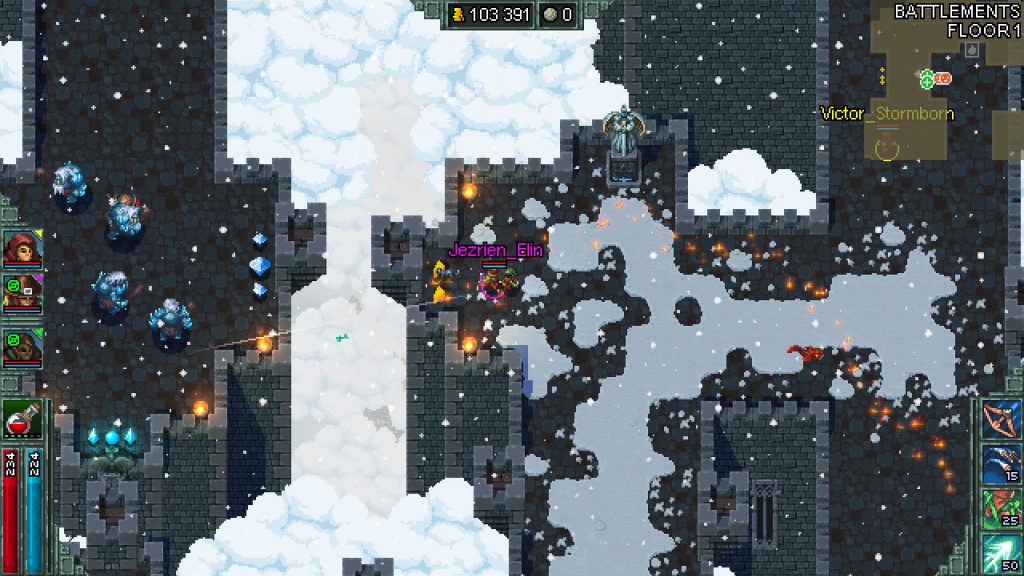 Indeed with your skills, there aren’t that many to unlock which is a shame as essentially the gameplay is fairly standard hacking and slashing and so some wild and varied new abilities would be quite welcome.  But anyway, aside from all of that you’ve also got people who upgrade potions, sell pets and a shopkeeper who sells keys (to be used on chests found in the game) and items.  There’s a lot going and that’s before you even visit the other hub worlds which include a gladiator arena and more NPCs.

What you’ll likely do, especially as you won’t have any money anyway, is find your way into the actual game.  Go off to the mines and you’ll go into the game properly.  Here you get a series of six levels, each with  two to three main stages and then a boss battle. 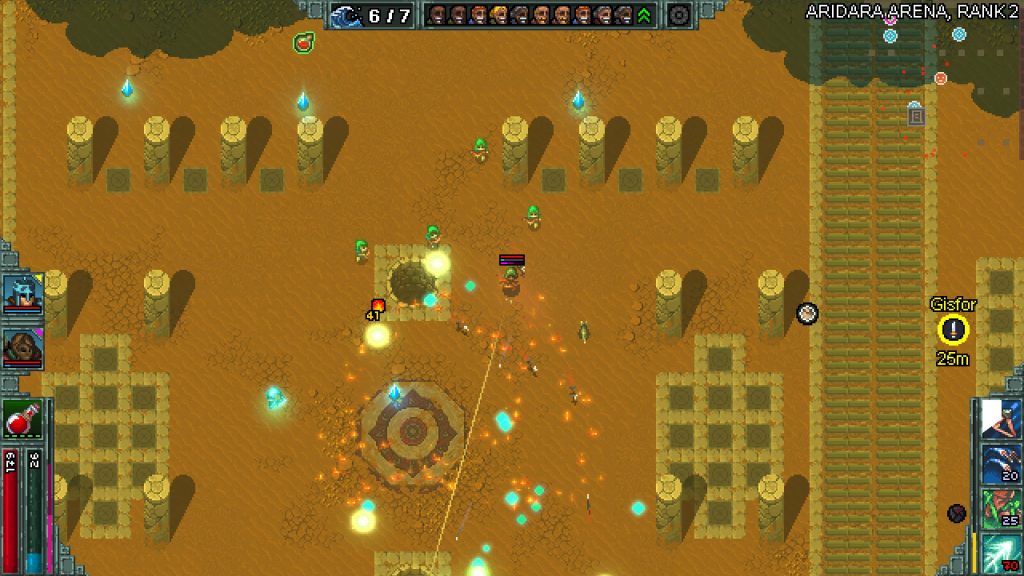 It’s all fairly standard dungeon crawling fare here.  You run around the level killing monsters, earning XP, finding money and ore (which is used to upgrade your buildings back in town) and finding items that give you little boosts such as health regen, increased XP gain, better combat stats and so on.

Each stage is randomly generated, apart from the boss battles, and that works quite well (occasionally the algorithm will produce some odd layouts but nothing unplayable).  The combat is good enough also with some classes focusing on close quarters combat while others keep things at a distance.  The game supports four player online co-op and the classes do compliment each other.  Also, along the way you’ll find items that give you various stat boosts and perks too and these vary in rarity with some of the more exclusive items really helping you out later on in the game. 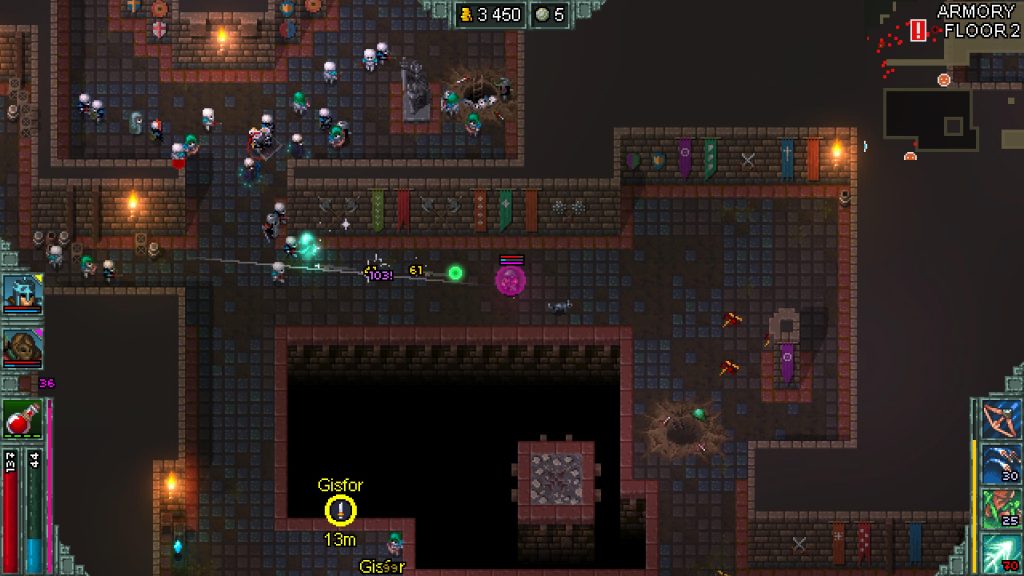 We have concerns though.  Firstly, nothing is explained.  It gets ridiculous at times with new NPCs showing up and you having no idea what to do with them.  It continues into the game too with some bosses needing specific methods to dispatch them and all of that is a mystery.  I played through the game with fellow PSC writer Gareth and we often had to Google things.  How do you kill boss 4?  How do you get past the locked doors in stage 3?  How do you get to chests that are on islands?  What does the ‘Retired Gladiator’ do?  We did a lot of reading to figure it all out and that was only the tip of the iceberg.

Of course, you could play with an experienced random online and get carried.  That happened early on but the game, shockingly, has no voice chat option.  That’s right.  You can’t speak to each other.  It looks like there might be a chat console box on the PC version (it shows up when people die in the game) but you can’t access it on PS4/PS5. 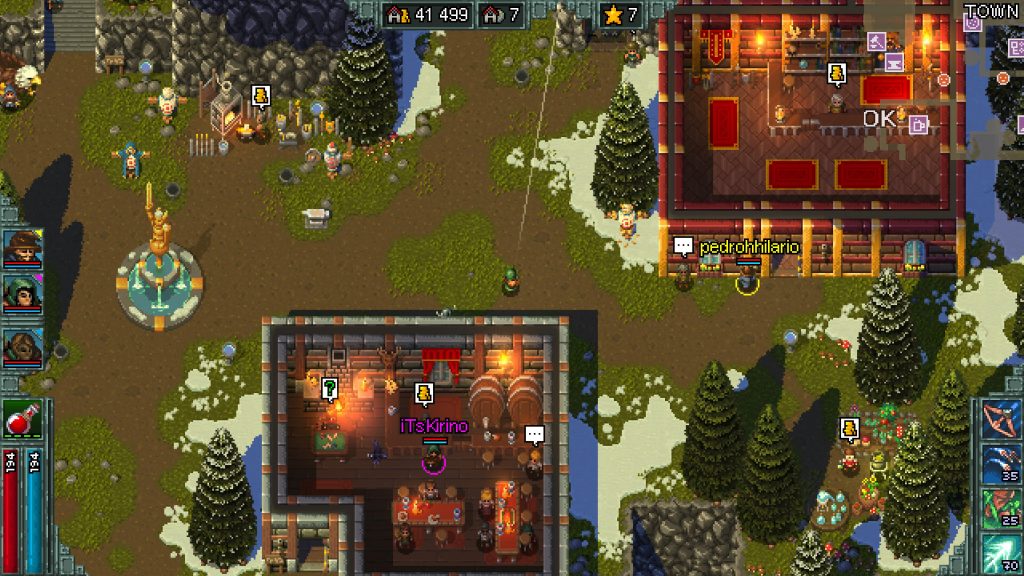 The level design is also quite poor at times.  For example, stage four relies on finding switches to open up areas of the maze like levels.  It’s not difficult, it’s just dull and uninspiring while other levels can be a bit of a mess visually, especially the final stage.

Also, concerning (well… annoying) is how glacially slow the upgrade process is.  Each upgrade gives you a tiny stat boost and they cost plenty.  And money gets taxed at higher rates the more you have.  It’s not uncommon to send cash back to your town at a tax rate of over 70%.  Everything is so miserly and you end up having to play for so long before you start seeing any improvements.  And I’m not even capable of explaining just how irritating this can all be at first without saying it’s often a bit joyless. 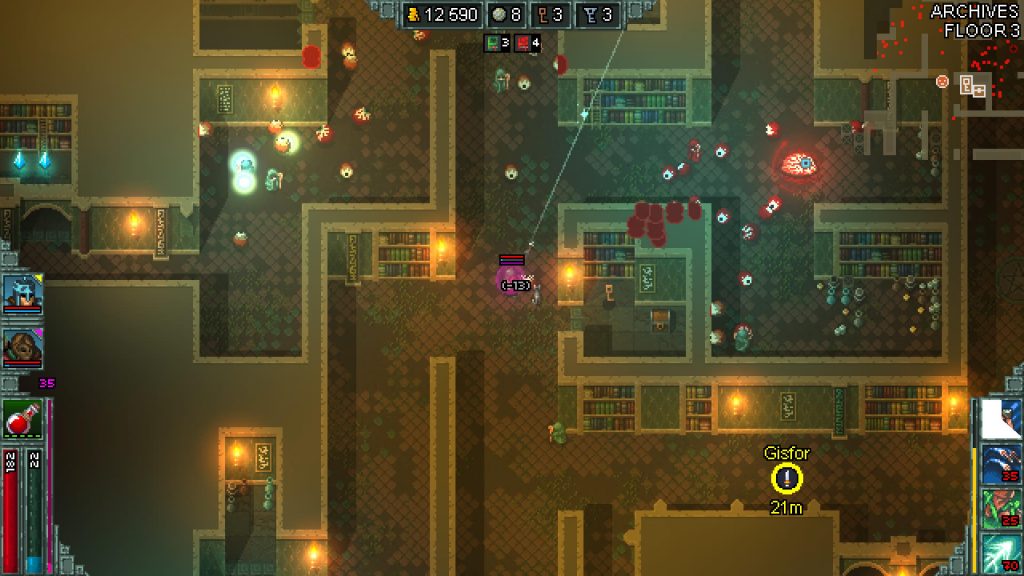 But here’s the thing.  Progress does eventually happen, you see more of the main campaign and eventually it all clicks.  Playing solo isn’t a huge amount of fun, certainly not as huge as the amount of grinding you have to do, but in co-op it can be quite engrossing.  The game might not always be fun but it can be shockingly addictive.  The game is incredibly hard to put down.

It’s also a pretty sizeable package with all the PC version’s DLC included which means you get two extra campaigns.  The Moon Temple hasn’t really clicked with us because of its weirdly restrictive level design and the Pyramid is still a bit of a challenge but the Arena is a really nice addition as it gives you a nice arcade-style structure where you take on waves of enemies.  If you die you take home nothing but if you can beat all seven waves (or five if you take that option) you can earn some decent money and ore. 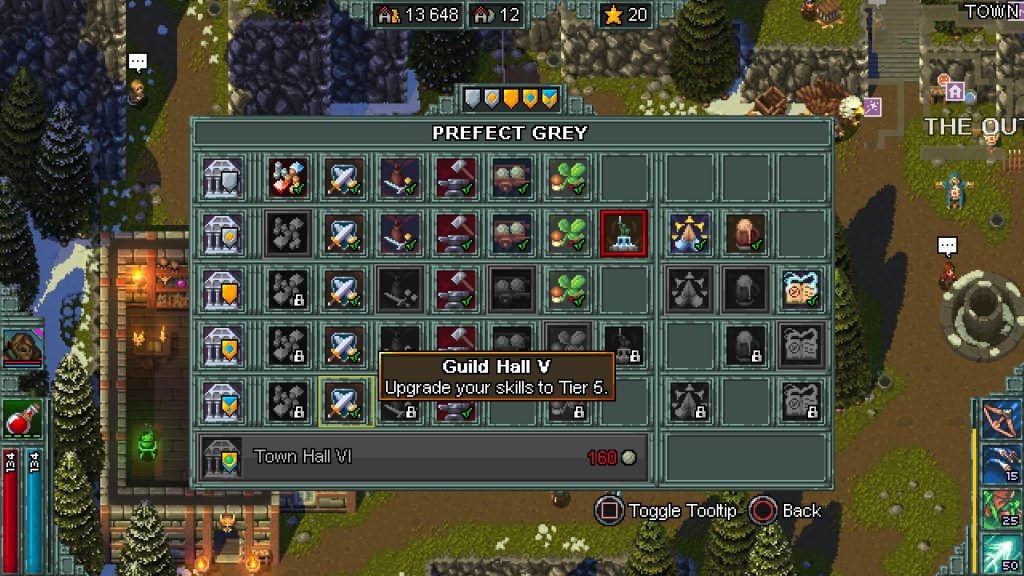 In terms of presentation, the game has a fairly dated, and now extremely, common pixel art style but it does look quite authentic in a coin-op kind of style.  With scanlines it wouldn’t look out of place in any ’80s arcade.  The music is pretty good with each stage getting its own theme.  There’s no speech though and the sound effects are quite basic.

In summary, this is a bit of a conflicted review because while we’re enjoying it a lot more now, those initial six or seven hours were rubbish.  It’s a bit like how Days Gone was good but all the best stuff happened after twenty hours’ worth of gameplay.  That’s not quite the case here but the game doesn’t do anything to win you over early on.  There’s a lot of game here though and the systems there do all work together (and we’ve not even touched on modifiers that can be used to change aspects of the core gameplay) and if you give it some time (and patience), you’ll find a seriously compelling rogue-lite but you’ll be wondering who the hell playtested the game.

Summary
Heroes of Hammerwatch is a clever and compelling rogue-lite with a steep learning curve and crack-like addictiveness but it is one of the least beginner-friendly games we've ever seen. As ever, basic playtesting should pick up things like that but, if you can stick with it, prepare to lose days, weeks and probably months.