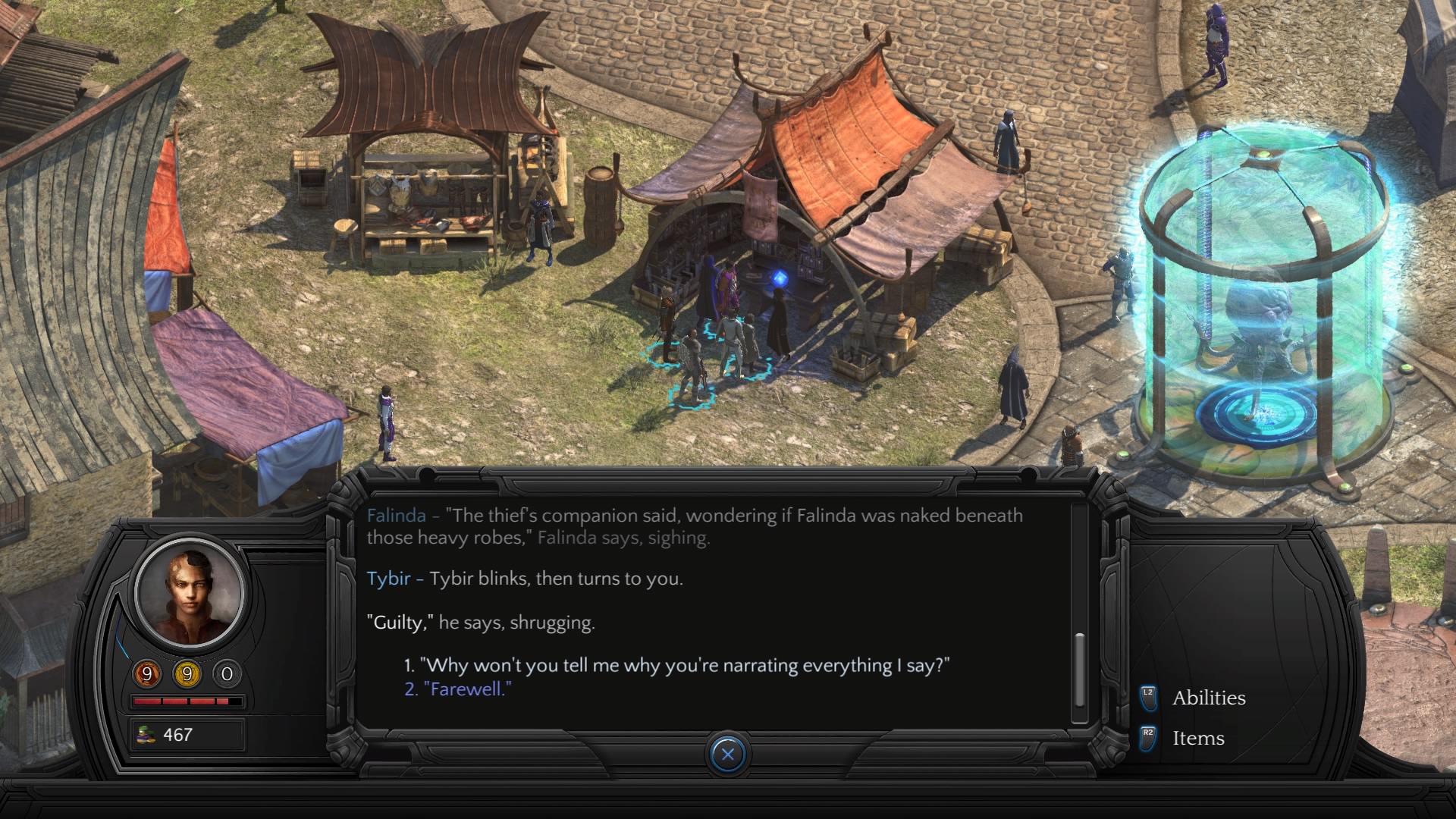 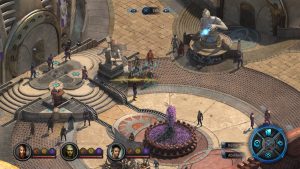 First funded on Kickstarter almost four years ago, this spiritual sequel to the classic CRPG Planescape: Torment has finally arrived. Planescape is revered for its story and characters but does Torment: Tides of Numenera do it justice?

One billion years in Earth’s future a man, looking to make his mark on the world, discovers ancient technology which enables him to transfer his consciousness to another body of his making. This basically makes him immortal as he creates bodies that are stronger, better, faster. People call him the Changing God.

You play as the Last Castoff, who is only born at the very beginning of the game. You’re not a baby however, you are the most recent body to be discarded by The Changing God. Every time the Changing God transfers his consciousness the previous body doesn’t die, a new consciousness is born within and you encounter many of your ‘brothers and sisters’ throughout the game. You don’t remember anything of your previous life however but are quickly found by The Sorrow, an ancient being who has awakened thanks to the Changing God’s meddling. The Sorrow has one mission, to restore balance by granting death to the Changing God – and his castoffs.

You get to choose whether you wish to be male or female but you don’t have any control over your physical appearance. Before you fully awake you can choose your starting class, though it is not through a simple menu, you remember scenes, possibly from your past, and how you respond to these will mould you character. If you’re in a fight do you use your speed to dodge blows? Take the blow and then counter? Or try to get a blow in first? It’s an interesting and organic way to develop a character and if you don’t like the outcome then you get the chance to just choose from a menu after, with the game merely suggesting what it believes you should be from your answers.

Your starting stats cover a range of qualities from combat abilities (heavy weapons, light weapons, stealth, etc.) to conversational skills (persuasion, deception, etc.) or even environmental (perception, natural, mechanical, etc.). Each are useful in their own way and will determine how you play the game and what options you have in certain situations. Party members can pick up the slack in any skills you lack which is supremely helpful. 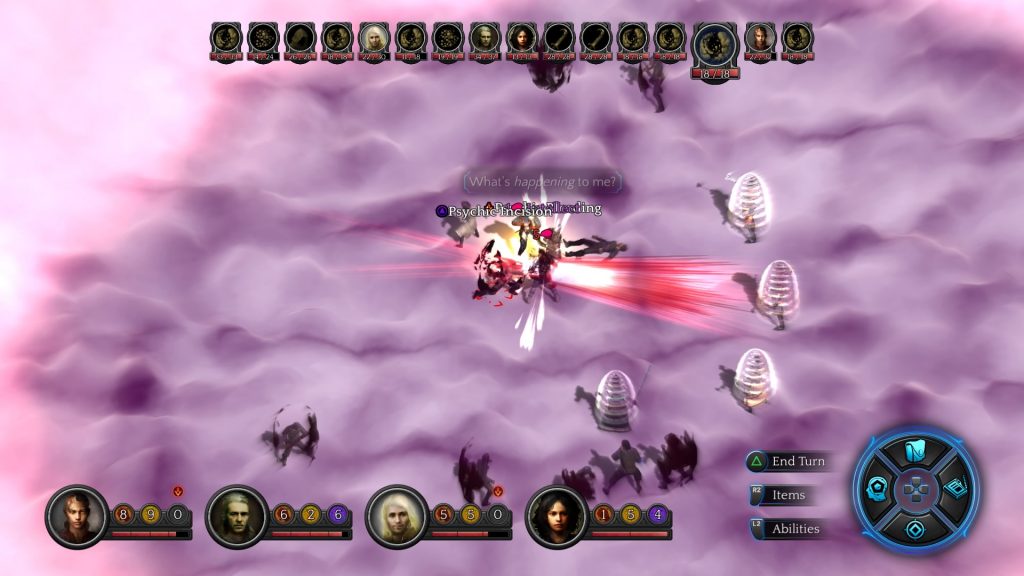 Upon starting your new life you quickly meet friends, (possible) enemies and can explore areas full of objects to inspect and people to converse with. Pretty much everyone you meet has a name and can be conversed with, giving insight into their character, past, situation and possibly helping you with your quests or even giving you new ones. There are some people milling about who merely have a little speech bubble when you speak to them but each area has a large amount of highly interactable characters.

Like the older CRPG games Torment: Tides of Numenera stems from your main interaction is through text based menus. You navigate the world by moving your character in 3D environments viewed from a three-quarter angle but as you talk to someone a text box appears and describes them, transcribes their speech and gives you your choices, whether that’s to ask a specific question or to perform an action. Members of your party are partially voiced but the majority of dialogue isn’t so you have to be prepared to do a lot of reading. It’s all very well written thankfully as merely inspecting an object can reveal a couple of paragraphs of text and talking to people can take a long time as you work through all the conversation options you’re given. In fact this is the primary element of Torment: Tides of Numenera so if you’re not interested in reading then you’re not interested in this game.

You need the descriptions as the graphics are fine, but not good enough to purvey the detail of the world alone. Similarly the character models aren’t that interesting, even for your party, and you will generally have the camera panned quite far out as you explore anyway.

Talking to people can be meaningless, gameplay-wise, but it’s all about world building. Similarly there are item descriptions on the things you collect that go into an unnecessary amount of detail but that is what this game is going for. Creating a living, breathing world for you to explore. Even non-quest critical characters can have an impact on your character though, as how you respond and act changes your ‘Tide’. Basically this is your good guy/bad guy meter, but it’s slightly more complicated in that there are five different elements which can be boiled down to empathy, reason, passion, aggression and justice. 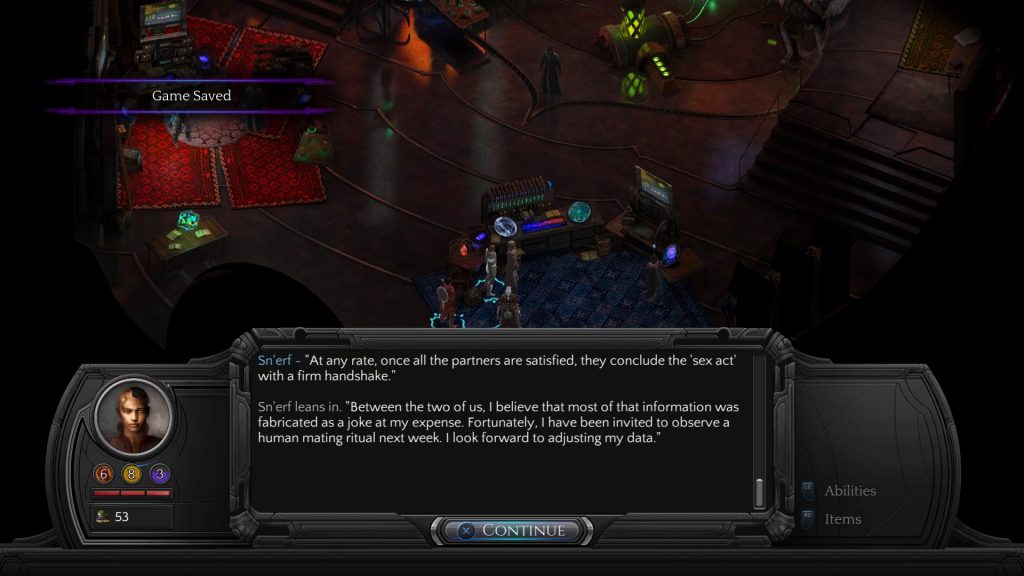 Certain actions will grant you a shift in Tide (represented as colours) and your most dominant Tide will affect how your party members react to you. You might think you’re a good guy but do your actions back that up? In fact, it’s not only in your Tide that your actions matter. Many quests will have multiple choices involved that can change many things. If someone accosts you do you simply fight them there and then? Intimidate them to make them back down? Persuade or deceive them into leaving you alone? Or perhaps just give them what they want? If you’ve annoyed them previously then you might find it harder to influence them as well, whereas if you’ve buttered them up then they may be a little more susceptible.

What you choose may change how things play out further on. If you kill someone then you can’t meet up with them later, which may or may not grant more rewards. Maybe you help someone but they become an enemy that appears later. Similarly certain choices require a skill check. If you want to persuade someone for example then depending on your persuade skill level you’ll get a percentage of success. To increase your chances you can spend points from a pool although these are limited. Even if it’s 20% there’s still a chance (this isn’t XCOM where anything lower than 80% is a miss) but even if you do fail, you may not get what you intended but it may lead somewhere you didn’t expect. Almost every quest will have these little branches that may be short or long term but your choices will have an impact on this world and its inhabitants.

Although the majority of the game is exploring and talking there is a combat system. Most can be avoided if you choose through persuasion or other means but if you do get into a battle then it becomes a turn based affair. There is a timeline at the top of the screen that shows move order and everyone can move and attack, or use an ability or item. Again there are percentages of success based on your characters skills and positioning. I personally tried to avoid fighting as much as I could as when I did get involved I found it to be the weakest aspect of the game. The fights are slow with enemy turns taking a long time to play out and despite having similar elements to XCOM it lacks the tactical depth of those games. I also had the game crash during combat a few times unfortunately, though besides some long load times and the odd hitch it otherwise runs fine.

There are lots of other mechanics in play with ‘cyphers’ being important items you can find which have one use but are generally quite powerful, but holding too many has strong negative effects. When you die you enter the ‘Labyrinth’ in your mind which warps and develops over the course of the game and houses fragments of other people meaning death isn’t a game over but just a gateway to another area. To go too deep into them all would take too long and also detract from some of the fun of discovering it yourself. Just know that this game isn’t short on mechanics, content or the bizarre. 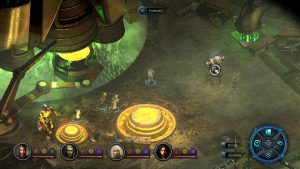 As long as you enjoy the writing and exploring the world then Torment: Tides of Numenera has a lot to offer. Every character you meet has their own story and every choice has an impact which further enhances the world. The combat is easily the weakest element but can be avoided the majority of the time if you choose and is serviceable all the same. There is a lot of content if you want to see everything and if you get drawn into the world then you absolutely will. A rich experience that fans of the genre should check out, but those seeking action should look elsewhere.

Torment: Tides of Numenera
8 Overall
Pros
+ The writing is top notch + Lots of characters to interact with and areas to explore + Choices feel important
Cons
- The combat isn't great - Long load times
Summary
Torment: Tides of Numenara is a text heavy CRPG with great writing. The world is surreal and interesting and the many characters are rich and varied. The huge amount of choices and interactions you make have consequences both big and small which help to enhance the feeling of a living world. The battles aren't great and it doesn't run perfectly on the PS4 with slight hitching and long load times but it's certainly an adventure worth taking.