The Surge was alright. The limb severing combat was an enjoyable take on the Souls formula and the sci-fi setting made it stand out. It was not without its problems however, with too many similar environments that became a chore to navigate. Deck13 have taken the criticism on board and hope to finally challenge FromSoftware at their own game with The Surge 2. 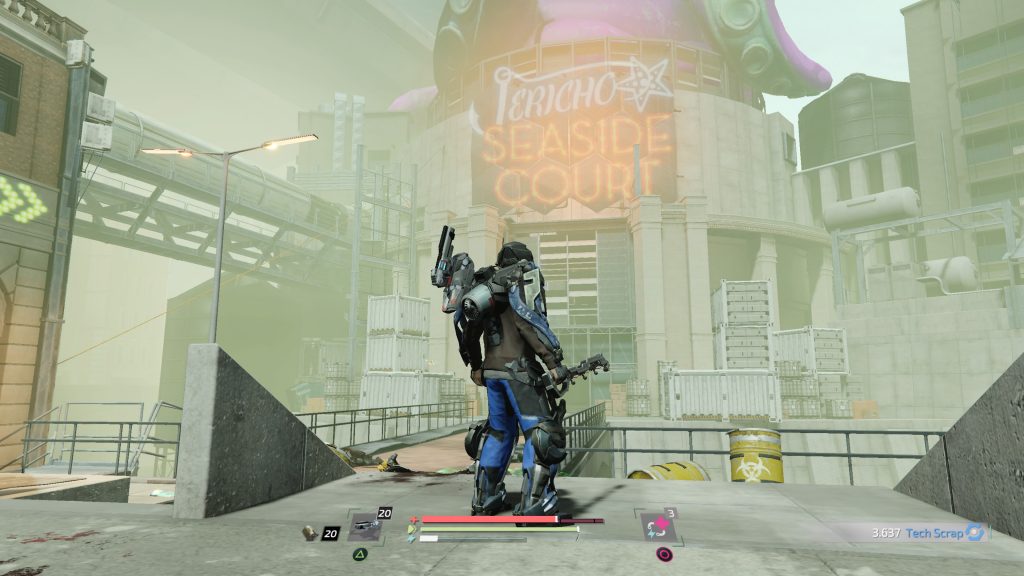 The main character from the first game, Warren, is nowhere to be seen as you create a new, nameless avatar. You wake up in the medical section of a prison after being in a plane crash. You’re able to walk the prison freely, as long as you’re happy to destroy a few security drones and defend yourself from your fellow prisoners. After a short while you’ll get your rig which players of the first game will remember. After some exploration and a boss fight against a guard you head out into Jericho City which has seen better days.

Players of the first game will get back into the swing of the combat very quickly. You still have vertical and horizontal swings on the right shoulder buttons which use stamina,

allows you to use your equipped skill. The main difference is

, which still blocks by holding it down, but rather than the weird jump and duck from the last game this time you can parry left, right, up or down by tapping the right analogue stick in that direction. Doing so at the right time and in the right direction opens up your opponent for a riposte. Having trained my parrying skills with Sekiro earlier in the year I really appreciated the new ability and I can’t imagine playing through the game without utilising it.

You can of course, absolutely. Your character is very customisable to adapt to the way you play. Same as in the old title you can target enemy limbs individually, and doing enough damage to that limb will allow you to chop it off at the cost of some battery which you accumulate by attacking. Doing so will grant you the ability to craft that piece of armour, or upgrade it. Different armour sets grant different bonuses, have different weights and cost a certain amount of power to use. 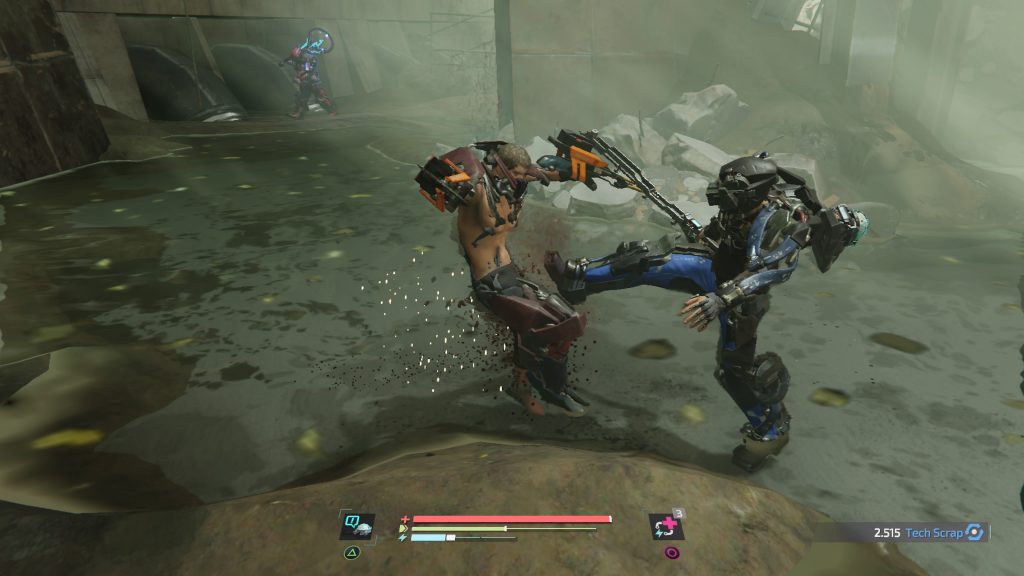 Similarly if you chop off an enemy’s right hand then you’ll get their weapon to use and there are loads. Then you have mods, which you can equip to give you bonuses such as more tech scrap (your currency used for buying, upgrading and levelling up), gain more battery energy by doing certain things and also you can equip consumables which cost battery to use like your basic health replenisher.

As I was into parrying I had quite a few mods that would generate energy and increase attack and defence after parrying. If you’re a little more reckless there are mods which will allow you to generate health back after a certain amount of attacks or every time you gain battery. The range of options is superb. The early portions of the game are quite a bit easier than the last game too so I’m sure, at least initially, that newcomers can find their play style. After about the half way point things got far more difficult however, so know that like most games in the genre this is a tough one to get through. Especially some of the, now far more interesting, bosses.

If you’ve become invested in the exploration you may well stick with it though. Unlike the samey sci-fi corridors of the last game there is a great variety of locales in The Surge 2. You start in a rundown prison, move into the city, then to a harbour and onto an artificial park. It’s still futuristic in many ways but rather than the bright lights and metal corridors of the first title it’s far more relatable, with sci-fi enhancements added to environments that could exist today. 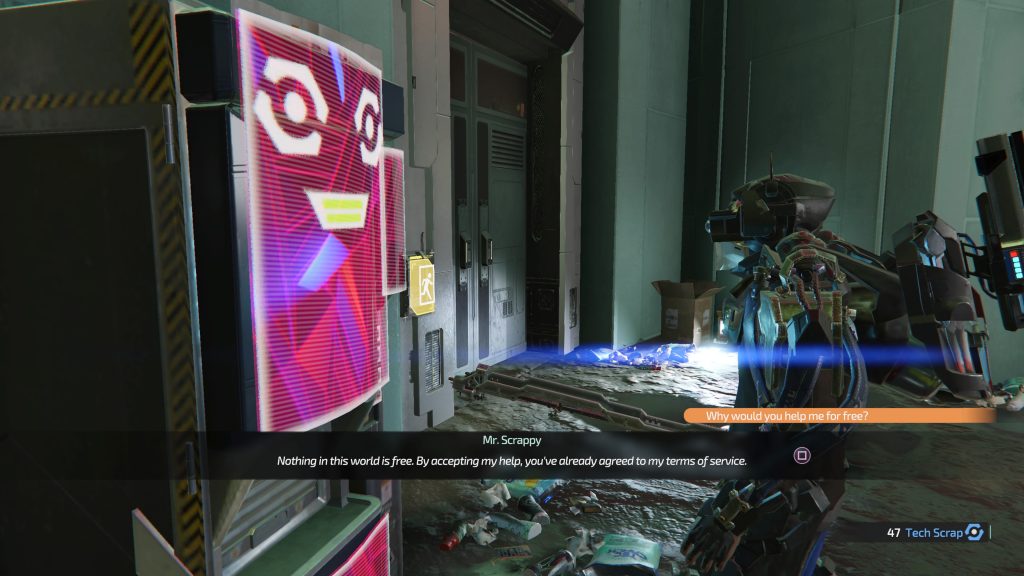 Each zone is separated by a load screen but each area is very complex. As with the first game you have a MedBay where you can level up, craft and upgrade equipment and respawn when you die (dropping all the tech scrap you were carrying so you have to go back and reclaim it, of course) and there are lots of shortcuts that you’ll find that make it easier to move from that starting point to further into the area. Unlike the last game you’re not simply trying to get as far as you can however, as there are lots and lots of side missions to take on that’ll have to moving back through the same areas.

As you explore you’ll see graffiti left by other players as The Surge 2 has an online component. You’ll never directly interact with a player but the online makes itself known in a few ways. The first is the aforementioned graffiti. Once you gain the ability you can use your drone to create tags from different symbols to inform other players of hidden items, difficult enemies or whatever you like.

You also gain the ability to drop a marker down. You want to hide the marker in the best place you can, as after an hour you’ll get an amount of tech scrap depending on how many people found your marker, the less the better. It’s a maximum of 5000 tech, which is great early game but less impressive later on. The third gives you the chance to avenge the death of another player by defeating a marked enemy. Defeating this enemy will give you more loot than usual so is always worth doing. They’re nice features to have but not game changing. 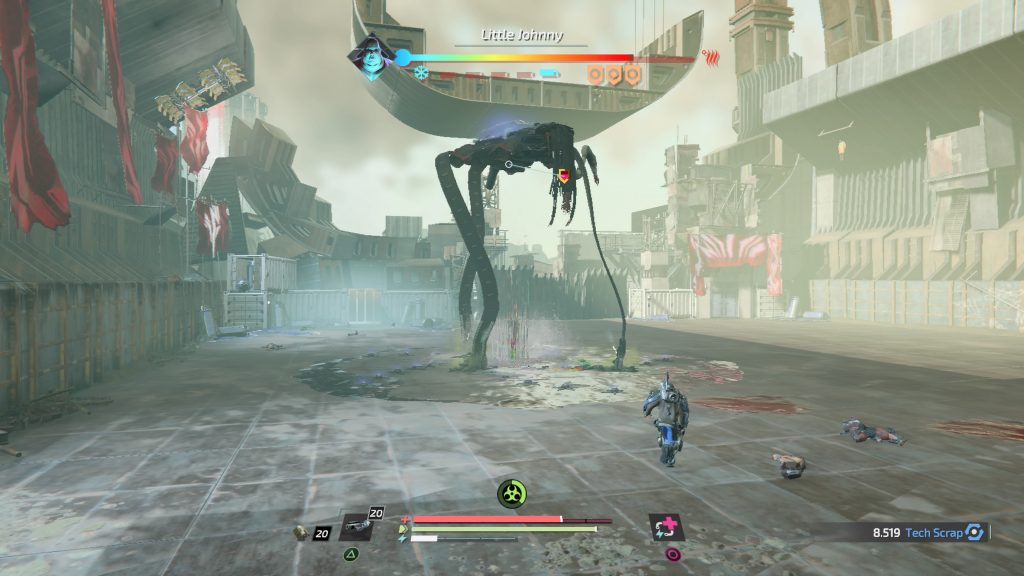 More of a game changer is the Metroidvania element. Rather than being gated by character level like in the first game, here you’ll gain abilities which will allow you to access new areas. Again it promotes exploration and returning to previous areas, although the lack of map makes it tough to remember where certain things were. The areas are so full of shortcuts and different routes that keeping track of them all is difficult so a map would have been appreciated.

Unfortunately that’s not the only issue. Design-wise things are absolutely fine and an improvement on the first Surge title, but technically it was not ready for release. Initially it only seems to be the visuals that are a problem. As you can probably tell from the screenshots this isn’t a looker and that’s because textures more often than not fail to load in, or take an age if they do. As a result the visuals, characters especially, look flat and unfinished, but I could deal with that. You have a choice of performance (60fps) or quality mode (30fps) and on performance mode things run relatively smoothly, only the odd drop here and there and some screen tearing.

As I got further into the game more problems occurred however. I had side quests break, with dead characters coming back to life and completed quests opening up again. I had the magnetic lifts that you use to get around stop working. The worst one was when I’d suddenly die by simply running through an area I’d already been through like I’d hit a kill plane in the middle of the room. Restarting fixed these last two issues but they shouldn’t be occurring in a product that is for sale. I had two crashes in thirty hours so that’s not the end of the world but still not great. 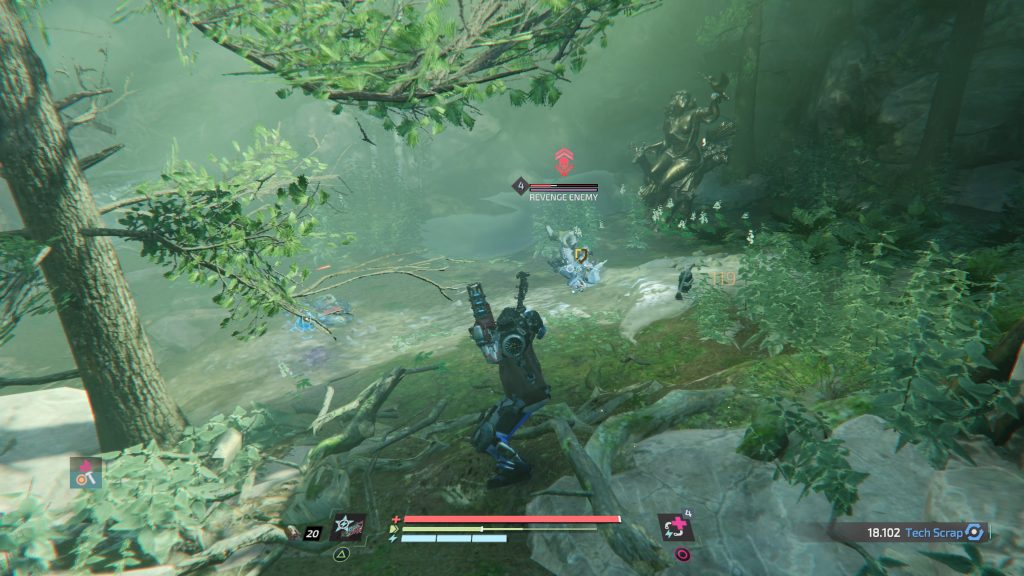 Obviously a patch will already be in the works to solve these issues but is The Surge 2 worth playing right now? I think so, just about. It was on course for an 8/10, even with the funky graphics, but unfortunately the other technical issues have forced my hand. From what I’ve seen of New Game+ there are added story scenes as well as equipment and the like, but I’m going to hold off playing any further until a patch lands. If they sort the visuals it’ll be like playing through for the first time!

The improvements over the first title can’t be ignored however. They’ve done the hard part, designing a fun combat system, creating intricate zones to explore and reasons to do so. More time would have done the game wonders on the technical side of things and thanks to the age of post-release development it will eventually get the time it deserves. I just hope it doesn’t scare off too many people before then.

The Surge 2
7 Overall
Pros
+ The combat is now even better
+ Plenty of variety in locations and character builds
+ Difficulty eases you in quite gently
+ Online features are a nice addition
Cons
- A technical mess right now
- I'd love a map
- Difficulty does ramp up around the mid-point
Summary
I enjoyed playing through The Surge 2 more than I did the original. The changes to the combat are for the better, the gentler introduction is appreciated and the variety in equipment and environments is excellent. Unfortunately at release it is marred with technical issues which I'm sure will be patched out, but shows it was rushed out a little too soon.