Despite sounding like the latest product from a pharmacy company, Habroxia is in fact a shoot ’em up in the classic coin-op style and is out now for PS4 and Vita as a cross-buy.  Developed by Canadian coders Lillymo Games, this game is very much a love letter to an era of shoot ’em up games before things went all bullet hell, referencing the likes of Gradius and R-Type rather than the genre standouts of the ’90s and ’00s that would follow.

What this means in practical terms is that generally enemies will shoot at you rather than laying down a carpet of bullets and asking you to navigate a narrow path through them.  The game offers four modes and the main one is your Story mode which has no actual story.  Instead you face the 15 levels of the game, stopping in between to either spend ‘credits’ on weapon and ship upgrades or to go back to earlier levels if you need to grind up your offensive powers a little whenever the game gets too tricky. 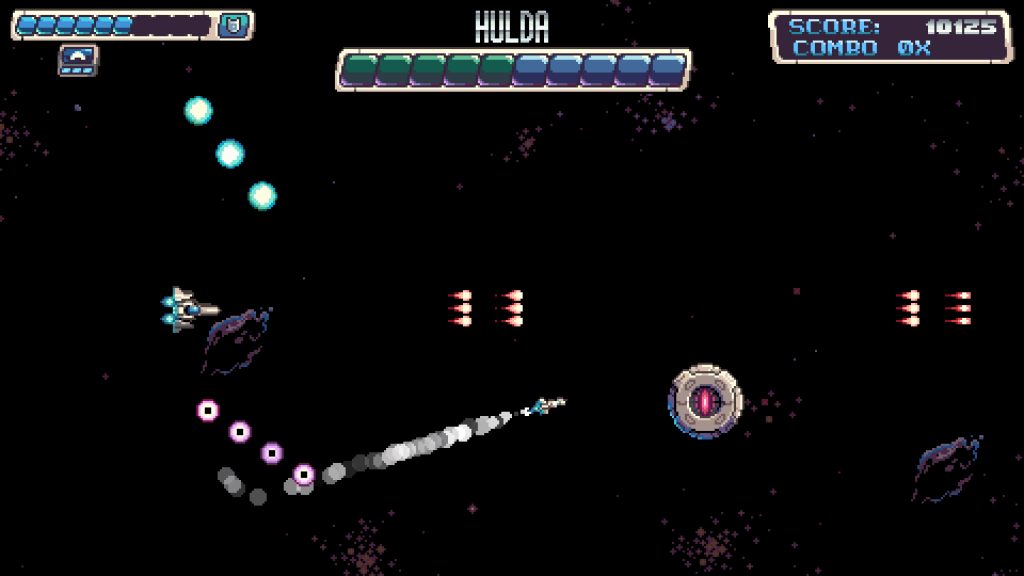 The gameplay is pretty standard initially.  At first it looks just like any ’80s arcade shoot ’em up.  There are some weird quirks though.  You have a basic forward fire attack mapped to one button, an above and under attack mapped to another and if you press both together you’ll get a sort of intermediate spray fire.  It’s an odd system, and it takes a little adjusting too, but it works reasonably well, giving you some strategic options although that secondary attack is rubbish and you’d be better off just having forward fire and the spray modifier.

As you fly along shooting alien bastards, you’ll see power ups and these will either offer temporary stat upgrades (don’t fret, it’s not complicated) or timed weapon or shield upgrades.  As is typical of indie shoot ’em ups, your firepower output isn’t exactly impressive, even when you’ve maxed it out.  There are no screen filling lasers or giant blobs of plasma but you do have the tools to get through the game and you do tend to notice that you’re getting more powerful as you go along.  That’s thanks mainly to the game’s rogue-lite nature which lets you buy and keep upgrades as you go along. 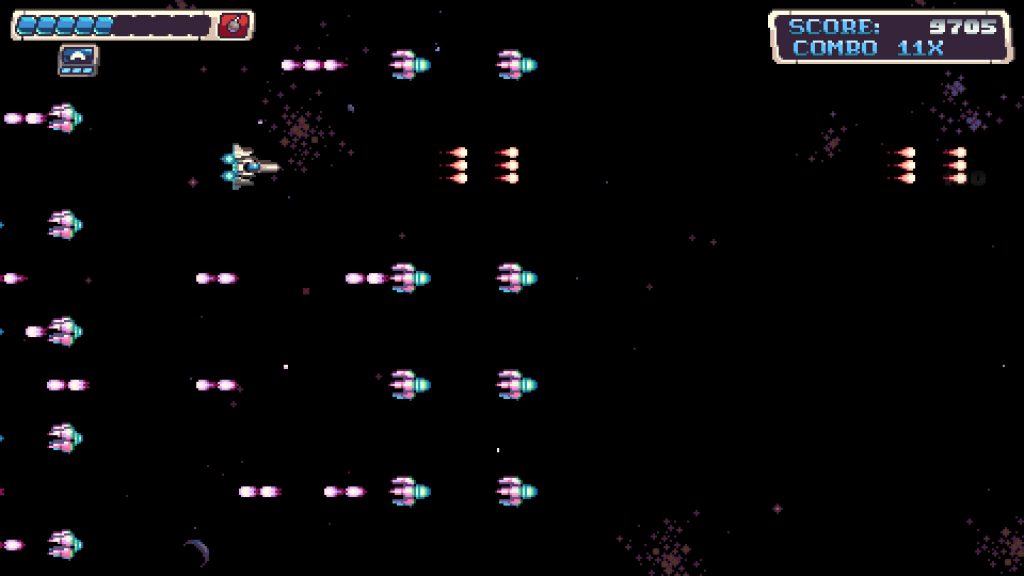 Each level is typical in that you’ll face flying enemies, fixed gun emplacements and, ultimately, a larger end of level boss that will generally take a lot of damage and will put out patterned attacks that you’ll need to learn to read quickly or else you’ll be in trouble.  There are some environmental hazards along the way but nothing interesting, just the walls that make up the levels.  It’s all very standard stuff.

What isn’t standard is the way that occasionally the game will switch from horizontal scrolling to vertical.  It doesn’t radically affect anything, the game still feels the same, but it’s a nice wrinkle on an otherwise fairly ordinary take on the shoot ’em up genre.  But once you get past that, what you have here is a pretty simple shooter and I was able to beat the game in one sitting, which isn’t great either.  There was a degree of challenge in those later stages but I’m not a shoot ’em up wizard and so many of you will blaze through Habroxia just like I did. 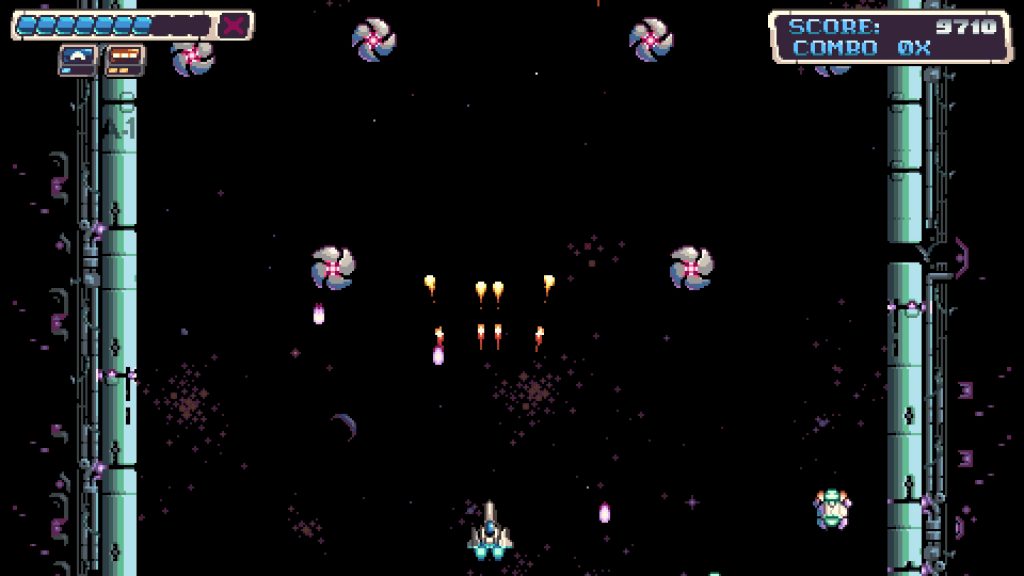 To mix things up a little, there are three other modes.   Shield Maiden mode gives you no armour and a peashooter level of weapon but does throw in shield power ups at a generous rate and Rescue mode offers just the horizontal part of the game but throws in astronauts to rescue.  The associated trophies for each of these modes were very easy to nab and with no online leaderboards to compete on, you’ll barely bother with these.

The Invasion mode however is a bit more interesting as it offers just the vertically-scrolling action and is over when an enemy gets past you.  It only took me a second go to get this mode’s trophy but it was more enjoyable than the other two extra modes.  With the Vita cross-over and the super easy platinum, you’d be forgiven for thinking that this was a Ratalaika-published game but it isn’t but it does suffer in the same way many of their games does because it doesn’t give you a reason to keep playing when it is all done. 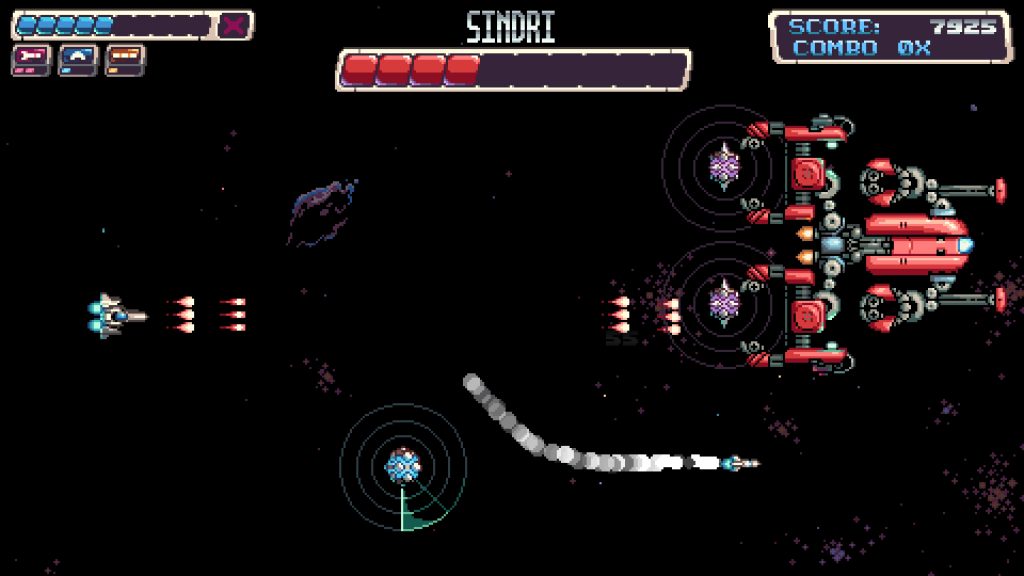 Visually the game is pretty bland too.  The visuals are very old-school technically speaking and so you’d think they could throw in some large enemy designs and interesting locations but each level looks the same (unless they throw in a bit of extra redness) and the enemy designs are very unambitious.  Where are the screen-filling bosses?  Where are the laser and particle effects?  The game never tries to look anything other than functional and that’s a real shame.  The likes of Gradius, Salamander, Forgotten Worlds and R-Type all look so much more interesting and those games are thirty years old now.  That said, the graphics do pop a lot more on the Vita than on the PS4.

I did enjoy Habroxia while it lasted though and you’ll get more mileage out of it if you’re newer to the genre but there are better shoot ’em ups on the PS4, and the Vita, and so this one might only be of value to people who are desperate for a new arcade game or the trophy whores.  As an old-school shoot ’em up fan, I just wish it was a bit longer and lot prettier.

Habroxia
5 Overall
Pros
+ Fun while it lasts
+ Has a couple of interesting gameplay ideas
+ Cross-buy
Cons
- Easily beaten in one play session
- No multiplayer
- No online leaderboards
- Visually underwhelming
Summary
Habroxia is a cross-buy shoot 'em up that has a couple of good ideas but is hampered by being too easy and visually bland. There's definitely some fun to be had while it lasts but that isn't very long at all.