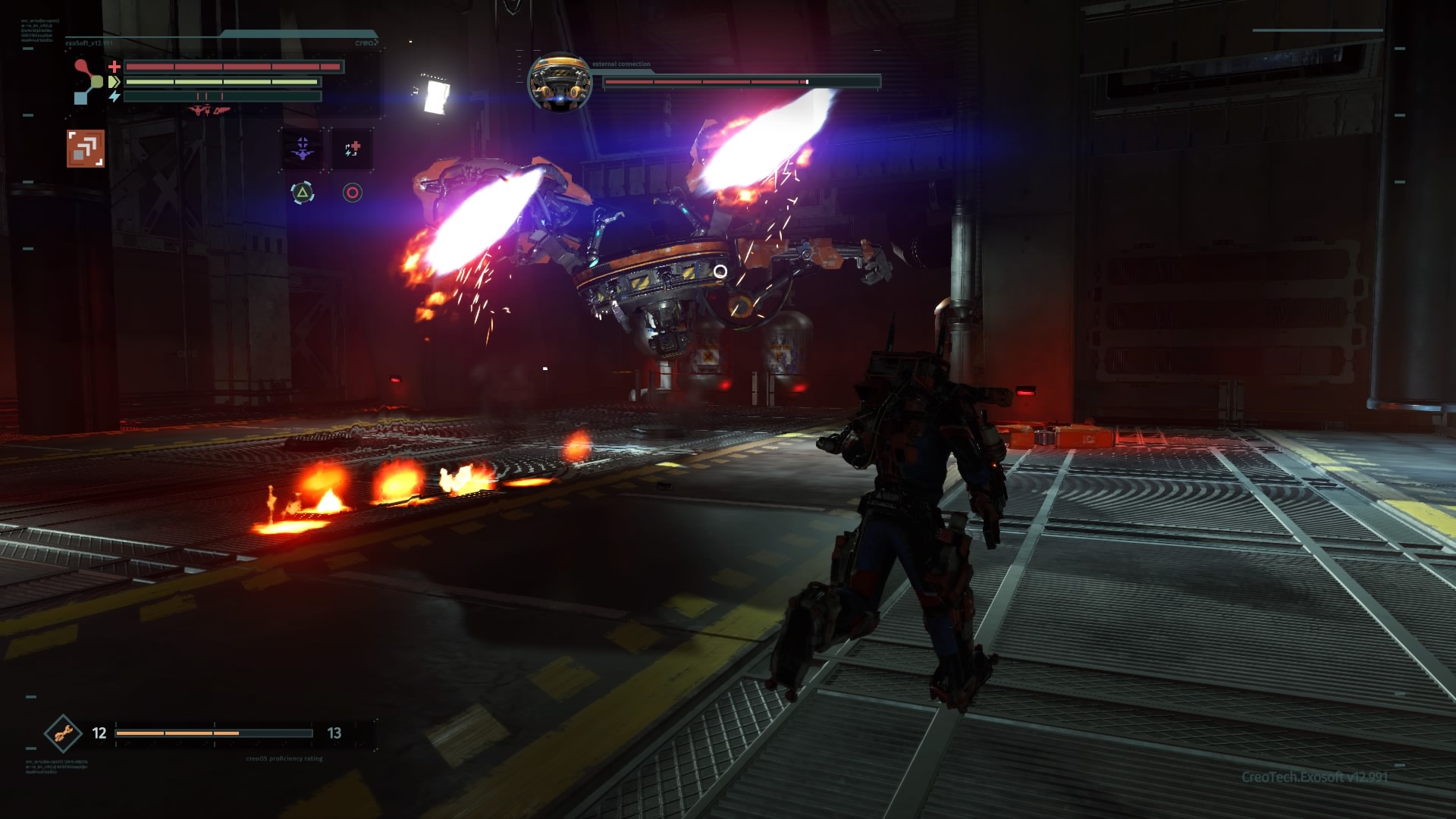 Deck13 Interactive created Lords of the Fallen, one of the first games to take the formula developed by From Software for their Souls series of games and try their own take on it. The Surge is their next attempt, but whereas Lords of the Fallen was incredibly similar to Dark Souls et al in every way this one takes a few steps in a different direction. 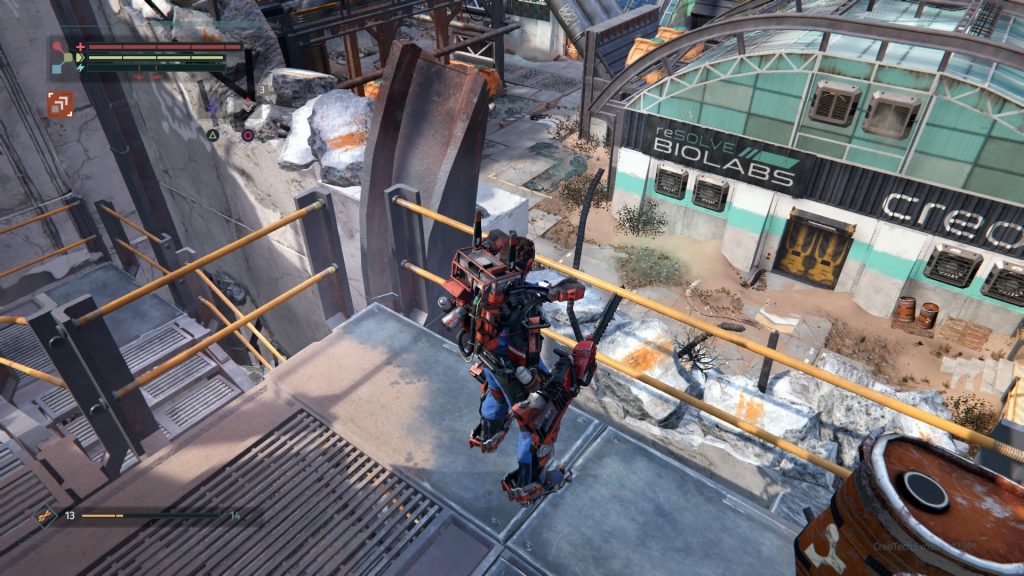 Set in the future, you play as Warren who has recently signed up to work for CREO, an advanced technology corporation. The next thing you know you’re waking up in the middle of what looks like a dumping ground with your new exoskeleton framing your body. I’ve left out the details of the opening cinematic as it’s actually quite strong but you’re not told much, so like Warren you have little idea of what’s going on.

A brief bit of exploration finds drones who attack you on sight and, more worryingly, humans who no longer seem cognitive but are also equipped with exoskeletons. Luckily a trusty pipe is at hand and despite Warren’s lack of combat experience he is able to dish out some damage thanks to his new rig. So starts your Souls-like sci-fi adventure.

Controls-wise things will be familiar to any Souls player, with a few minor tweaks. Attacks are on

but instead of light and heavy they are horizontal and vertical attacks.

does little other than allow you to change who you’re targetting when locked on.

interacts with the environment whilst

activates your drone once you’ve acquired it. Reasonably familiar I’m sure you’ll agree, but the first major difference in The Surge is in the lock on mechanic.

Clicking in the right analogue stick locks on to your target, from there you can move the stick to target specific limbs on your opponent. A lot of the time enemies will not be fully armoured so targetting an unarmoured limb will do extra damage. It is in your interests to target armoured limbs however as if you do enough damage on a single limb then you open up the ability to sever that limb with a finishing move that has a high chance to drop loot. 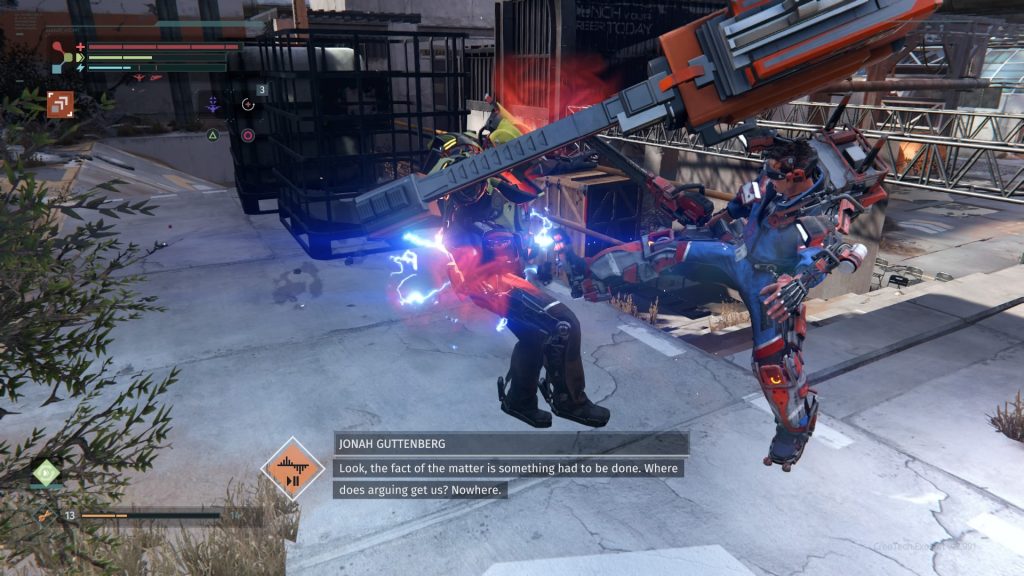 Fancy that enemy’s leg armour? Attack a leg until you can remove it by force. You damage it upon removal but what you will gain is a schematic for making it and some materials to make it with. It’s an interesting mechanic which has you considering whether you go for the quick kill or go for materials that could make you stronger in the long run. Naturally killing an enemy also grants Tech Scrap (Souls) which are used in the crafting of new gear and levelling up your rig.

You drop these scraps upon death and must return to them without dying in order to retrieve them. One slight difference is that you have a time limit in which to get them, which can be extended by defeating enemies along the way.

Rather than a Souls game’s list of attributes for you to level up, The Surge just has you dumping scrap into your rig and it increases your power output (which equates to your level, basically) which dictates bonuses to health and stamina. Equipping armour takes power so you want to make sure you have enough to wear what you like. Similarly there are implants that give bonuses, like more HP or extra scrap drops that also take power. Your power level is also used to gate certain areas, with Warren able to overcharge control panels if his rig is powerful enough.

Speaking of the environment, it’s The Surge‘s greatest ally and weakest point. As it’s set in the future there is a strong sci-fi vibe that hasn’t been done with the Souls formula before which carries the game for quite a while. Mechanical enemies, clean, shiny corridors and sharp lighting all make the game feel more original than it actually is. Unfortunately before long you do realise that everywhere looks very similar. There are some minor differences in certain areas but there’s nothing like the variety you’d expect from an actual Souls game. Unfortunately this can also affect the gameplay as you get lost as everywhere looks so similar.

Rather than one big, interconnecting world like in Dark Souls, The Surge is made up of areas split by load times. Each area is a decent size and can encompass multiple sections but you won’t be looping back from one area to the other. There is only one MedBay per area (this game’s version of a bonfire, where you level up and upgrade items) so the shortcuts come from finding ways back to it from deeper into the level. What you end up with is incredibly intricate, labyrinthine levels which due to the aesthetic can be very confusing. There is no map, as is the norm for this type of game, but here I would definitely have benefited from one as a lot of time was spent just trying to find where it is I wanted to go. I could probably go back to any Souls game and find my way around pretty easily, even after all this time, I don’t believe that’s going to be the case here. 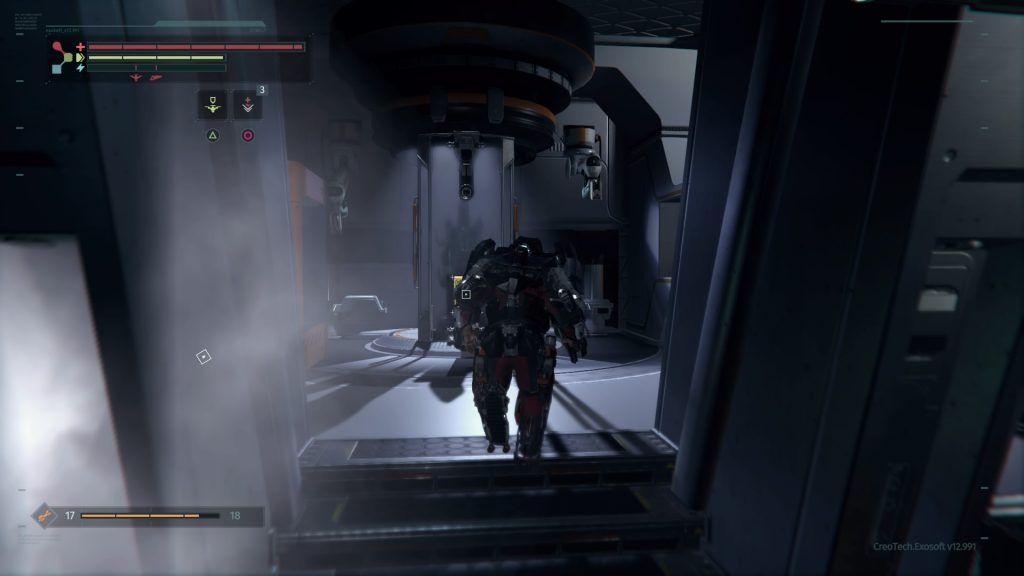 Similarly the enemy design isn’t incredibly varied. You’ll fight small drones, a couple of bigger robots and humans in rigs. These people will have different armours and weapons which will dictate your approach but visually they’re not massively different. There are also only five bosses in the game, which from a Souls perspective is a very small amount. Each is radically different though so I’ll give it that.

Although the enemies themselves can feel repetitive you can never feel bored fighting them or relax for even a second as every battle in The Surge is life threatening. Throughout the game most enemies can two shot you, if you’re lucky, which means one false move and you’re in trouble. It does mean it’s quite rewarding when you overcome an obstacle but it can also be quite exhausting and there have been times when I’ve resorted to running past enemies just so I didn’t have to spend time fighting each individual again.

Technically it’s also a bit of a mess at times, with the camera being a real problem and later enemies bugging out, getting stuck on their movement boundaries and cancelling from one animation into another. Nothing too game breaking, though one time I did load the game and no enemies spawned and another time I died from touching a downed enemy. A little more polish wouldn’t have hurt though I have to praise it for its fast load times.

Now I realise I might be sounding a little down on the game and the environment design is a real bummer, but I still played it for hours on end. Finding the right armour for me and levelling it was addictive and finally being able to stand toe to toe with a normal enemy who was killing me in one hit previously is a great feeling. As you progress previous areas change so there is a sense of story progression and the few side characters you meet, though nowhere near Solaire level, do add a human element to an otherwise horrible future. 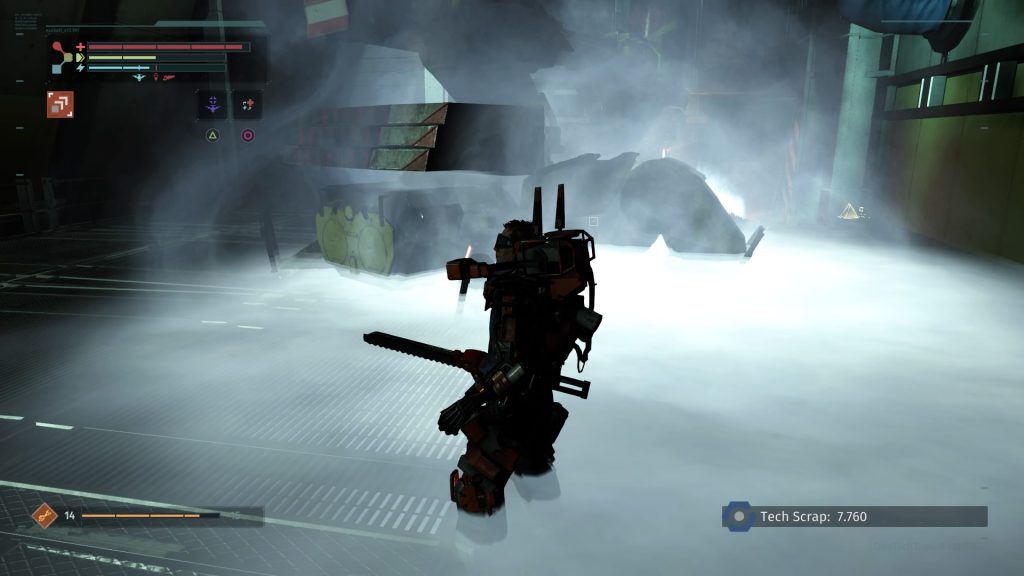 So although there are some design and technical issues I can still quite happily recommend The Surge. It’s nowhere near the quality of its inspiration unfortunately but the few new ideas it does bring to the table add quite a lot to the enjoyment of this game. The sci-fi setting is refreshing initially and the limb targetting never gets old, it’s just a shame exploring this futuristic environment isn’t as interesting as it could have been.

The Surge
7 Overall
Pros
+ Limb targetting mechanic is fun
+ Sci-fi setting is novel
+ A challenge worth overcoming
Cons
- The environments are a chore to navigate
- Could use more variety
- Some technical issues
Summary
The Surge adds some new elements to the Souls formula that for the most part work well. It fails to live up to its inspiration in the design department, with samey environments and a lack of enemy variety but the combat holds your interest to its conclusion.