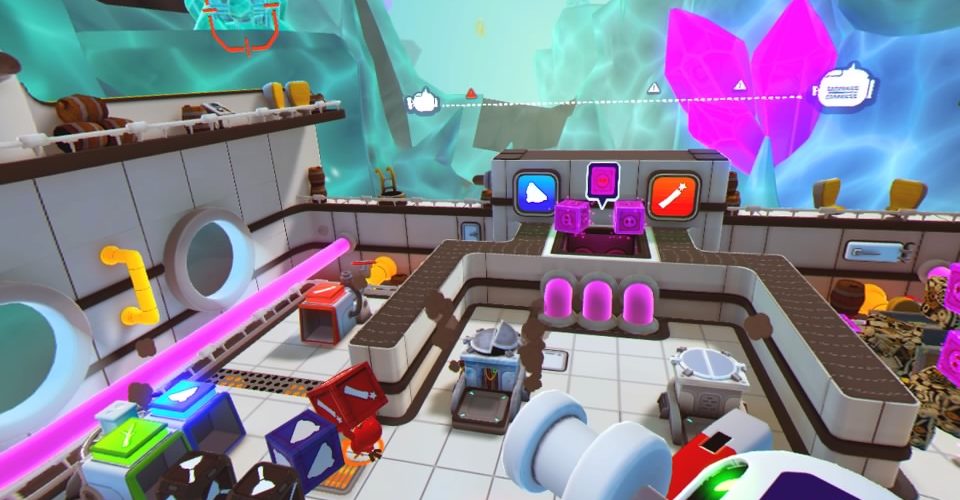 A feature of VR that is a little underutilised is the ability for other people to join you in playing your game through the television, whilst you’re locked away in the headset. The Angry Birds Movie 2 VR: Under Pressure is a movie tie in that allows you to do just that. Think of how Overcooked plays and you’ll not be far off, as juggling multiple jobs to earn points and ultimately get a three star rating is the aim of the game. 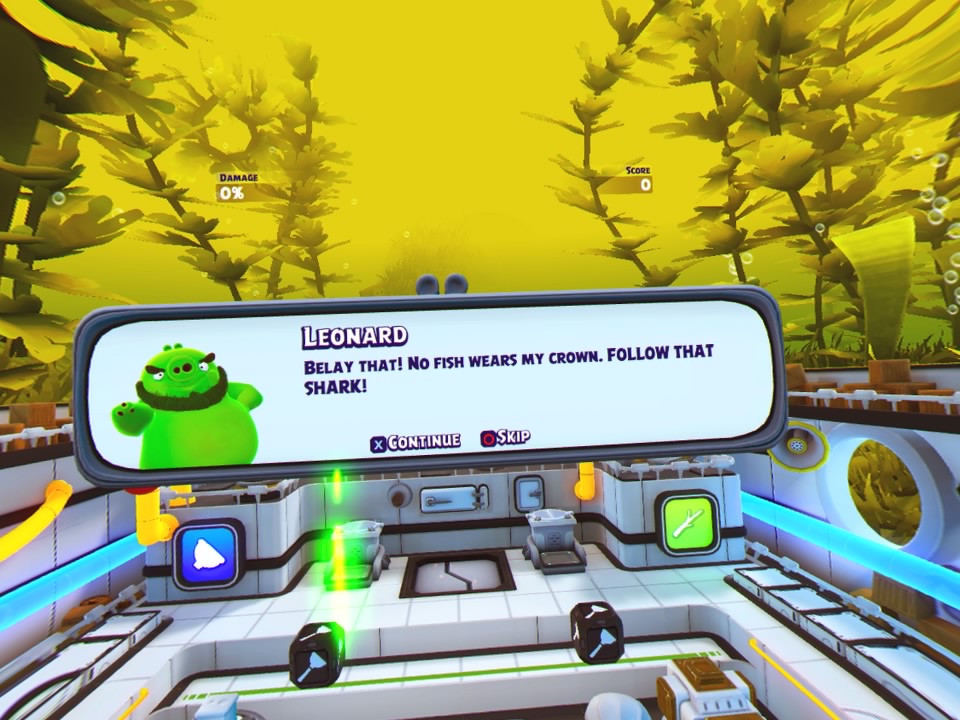 I’ve got to admit to not knowing anything about the Angry Birds franchise, movie or otherwise. I played a tiny bit of one of the many mobile games but beyond that I’m in the dark. Luckily it’s not that important. The game starts with a trailer for the new movie and and there are spoiler free clips that’ll play in between levels but all you really need to know is that the characters from the movie are in a submarine on their way to an island.

Whilst travelling underwater they want to collect treasure so that’s where you get your points. The person in the VR headset is the captain and they can look around in 3D as you’d expect. They can interact with things using the motion controls on the dualshock and pick things up with their magnashot (a big magnet) by holding

. Outside of the submarine you’ll see chests and obstacles which the captain can shoot at, a plunger on a rope to retrieve the chests and a torpedo to clear obstacles.

That’s where the other players, and the Overcooked comparisons, come in. Up to three other players can play through the television from a (angry) bird’s-eye view and control characters from the film. It’s their job to load the plungers and torpedoes, but it’s not that simple. Plungers need to be crafted by getting boxes from a hatch, one with sticks in and one with the suction cup end in. Put both into a machine and out will come two plungers which can then be loaded. Torpedoes can come already made or will require you to put a box with dynamite in into a machine to craft before loading. 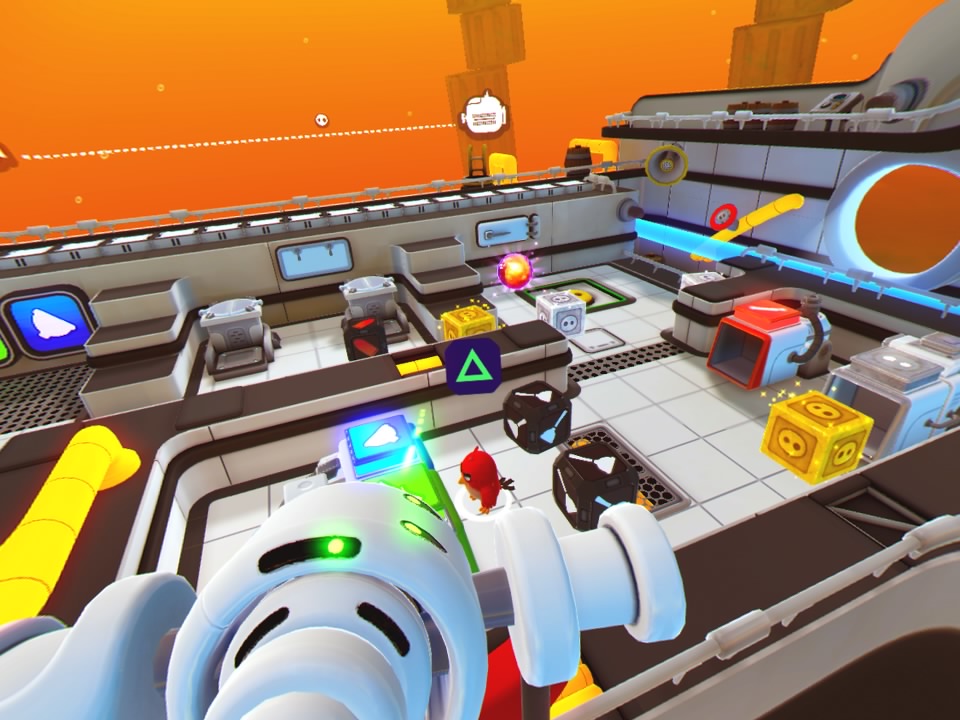 As long as it’s not explosive the captain can help move things (and players) around with the magnashot, flinging things from one side of the room to the other. Once chests are collected they appear in the sub and spit out all the spoils. Cubes of various rankings need to be placed around the edges of the screen to count, junk needs to be disposed of in the furnace as do time bombs which give you fifteen seconds until they explode, damaging your submarine. If your sub takes too much damage from obstacles or explosions then it’s game over, otherwise your points will be stacked up (minus any junk you failed to get rid of) and you’ll get a rating out of three stars.

A timeline for upcoming chests and obstacles is displayed allowing you to see what you need and in what order, helping you organise the building and loading of ammo for the destruction of obstacles and collection of chests. Cleaning up the deck once a chest is collected is the key to three stars, staying on top of collecting points and removing the immediate danger of TNT and the point sapping junk. Of course, like Overcooked, as you progress through the game the level layout changes to make things less straightforward with awkward positioning of the items you need and added complications like conveyor belts.

There are only ten story levels but as we’ve established the story isn’t really important to the game and act more like an extended tutorial as it introduces new elements. Altogether there are 31 levels, though nine of them are the story levels again with the difficultly turned up. 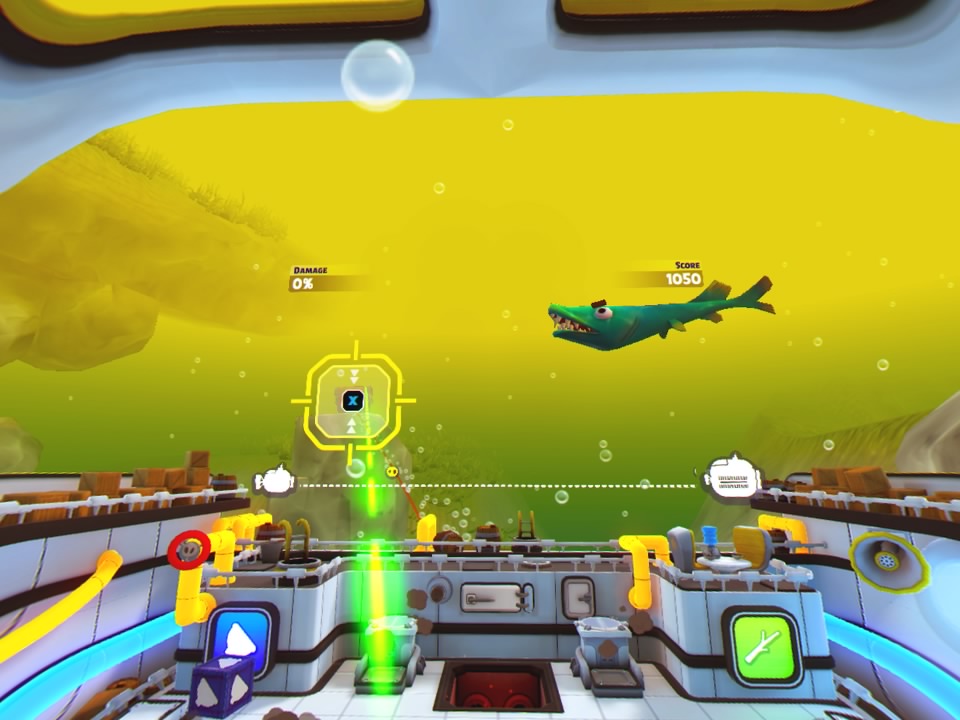 Obviously this is designed with co-op in mind, but you can play it by yourself. If you are going solo then you press

to switch between controlling the magnashot, allowing you to grab chests and shoot torpedoes as well as throw stuff about on deck, and controlling a character running around picking up boxes (especially the explosive ones) and loading. It’s certainly doable and I played the story levels like this and got three stars on most on my first try. However as I progressed beyond that one star results were common place. Collecting chests and placing the boxes to receive the points isn’t really a problem, but the amount of junk thrown at you is difficult to clear whilst multitasking which will negatively affect your score massively.

I’d have liked it if the button layout was slightly different and the game allowed a solo player to control the character and do the captain stuff at the same time. It would have provided an interesting ‘pat your head and rub your belly’ style mechanic and might have made going for the higher scores by yourself more realistic. As it is primarily aimed at co-op play however I can’t knock it too much.

Visually it’s bright and the characters seem well represented. The buttons and boxes are easily recognisable in a hurry which is appreciated. Outside of the submarine isn’t anything special however with most areas looking quite similar, though you’ll struggle to notice as things get so hectic.

The tracking of the headset was fine, but the dualshock would often lose tracking and be pointing off to the side. As you’re in the headset you don’t notice straight away but when you’re twisting your body but the game thinks the controller is pointing straightforward you’ll notice soon enough. A quick shake of the controller tends to fix it but it’s a shame and takes you out of the moment. 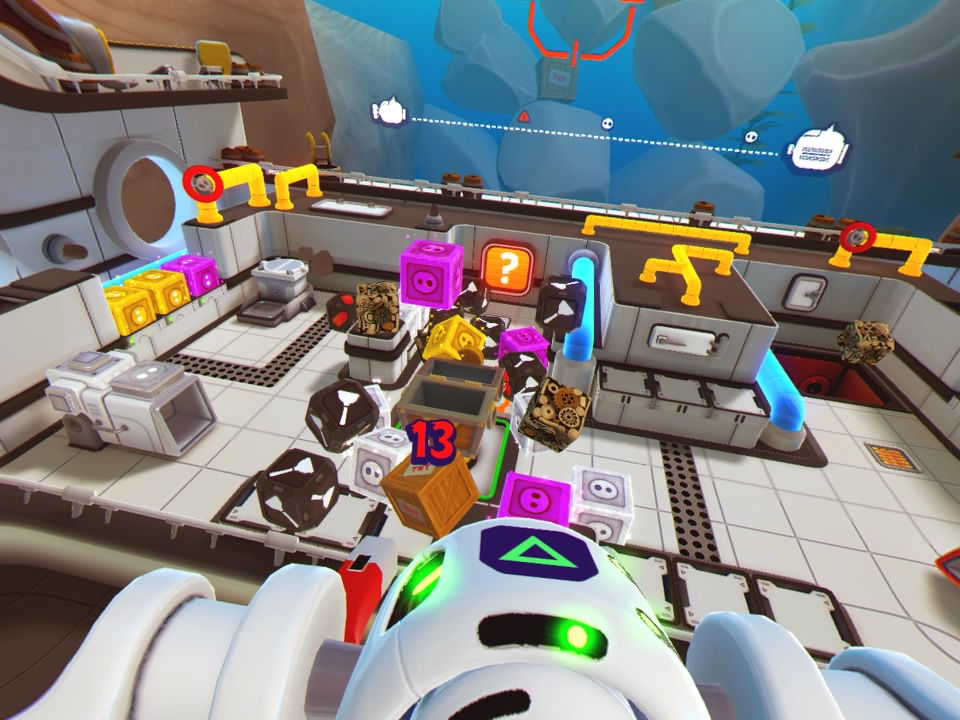 If you intend to play this with others, perhaps you have some young ones in the house who are fans of the film but aren’t old enough for VR yet, then The Angry Birds Movie 2 VR: Under Pressure is a fun, hectic time that promotes team work. If you don’t have anyone interested in playing this with you then it’s a tough sell. It could have worked as an interesting solo experience but the control scheme makes it far more difficult than having three helpers. If you’ve got the right amount of controllers however then there is a lot of enjoyment and challenge to this that takes advantage of VR’s capabilities.

The Angry Birds Movie 2 VR: Under Pressure
7 Overall
Pros
+ Hectic, cooperative gameplay
+ Gets more challenging the further you go
+ Good use of the social screen
Cons
- Limited fun solo
- Controller loses tracking often
- Under water graphics are lacking
Summary
The Angry Birds Movie 2 VR: Under Pressure is a fun cooperative VR title. Without others to play with the controls are a bit cumbersome and the challenge very high, but with other players working together to take care of specific jobs this is one of the few games that makes VR sociable.