Of all of the classic coin-ops, those legendary arcade games from the ’80s, one that doesn’t seem to get as much flattery, by way of imitation, is Scramble.  Konami’s 1981 shoot ’em up was pretty unassuming and is almost forty years old, so that’s to be expected we guess but DM Media do because Terra Bomber channels the old classic pretty strongly.  Yep, this is a side-scrolling shoot ’em up too but one that throws some unexpected gameplay mechanics at the old formula.

Terra Bomber is a very minimalistic game.  The game’s icon on the PS4 screen (which is also it’s logo) is as old school as it gets.  The game launches up with monochromatic instructions written in text only with no graphics and there are very few bells and whistles here.  This is after all the work of just one man, Daniel Gallagher.

The main menu is similarly plain, offering options to ‘play’, ‘practice from best level reached’ and general settings which offer basic sound and controller settings as well as the option to reset all your progress.  Something we’re 100% sure nobody will ever select. 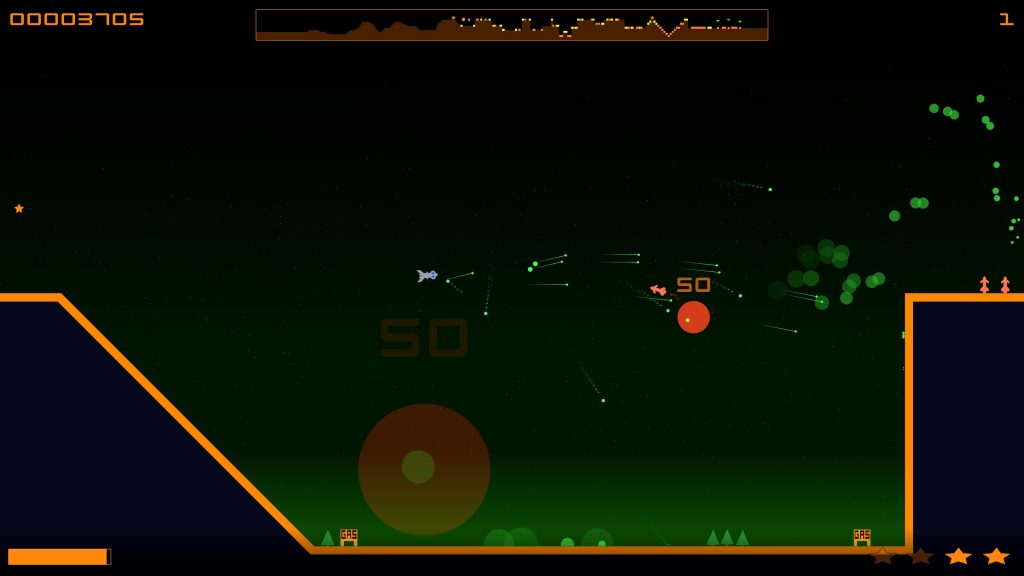 Once you get into the game, you’ll find this to be a fairly obvious Scramble clone which is to say, for the uninitiated and young, that you fly ever onwards over a jagged landscape as you shoot and bomb enemies.  Survival comes from bombing fuel dumps to make sure you don’t run out of gas (very much from the Scramble playbook) and, if score is your concern, not shooting trees is a good idea.

The game has ten levels and all you have to do is navigate each level and keep shooting, and bombing, your way to safety.  This is made slightly easier by the autofiring controls (you just need to hold the bomb and shoot buttons) and the fact that, unlike Scramble, you can pick up option style pick ups that add an extra gun turret to your arsenal.

Now let’s get this straight.  I really want to love Terra Bomber.  I never had much history with Scramble until the Xbox Live Arcade port from about ten years ago.  That port had a trophy for completing a loop of the game in one life and by mastering that, I realised what a tightly designed game Scramble was.  Beating it in one life wasn’t easy but it was doable, proving that there were no unfair deaths.  You just had to be good enough and keep your concentration long enough to survive the challenge.   That takes precision but the game gave you the toolset to be precise, it was just your spacky thumbs and fingers that were the problem. 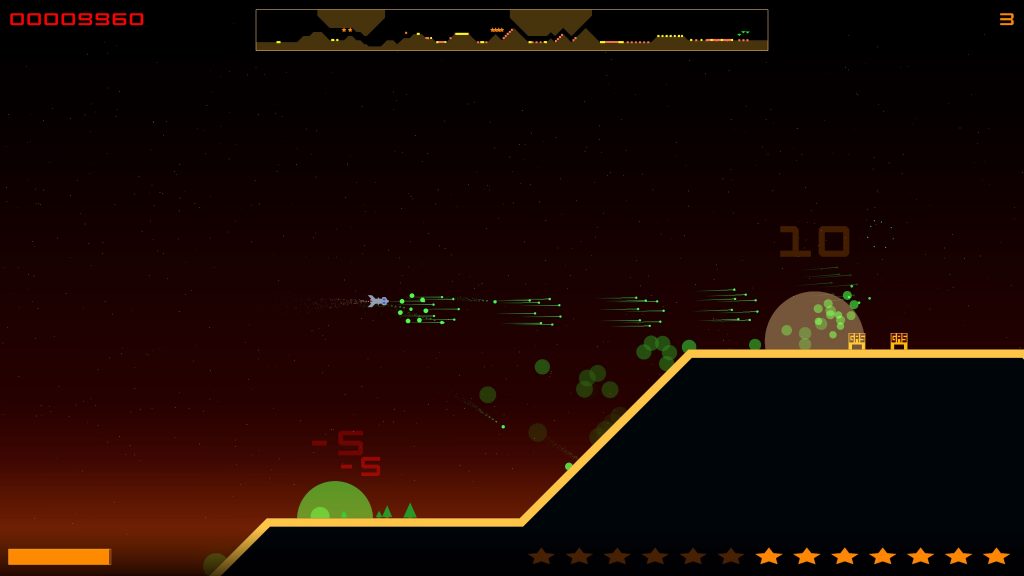 Terra Bomber‘s main flaw is that it doesn’t do that.  From the off, it feels wrong.  This is partly due to the unnecessary inertia on your ship which ensures that you drift a few pixels extra whenever you move to the odd choice of only allowing analog controls (which is particularly weird given that the menus only accept d-pad input).  But then there’s the fact that both guns don’t shoot forward if you are moving up or down, instead they tilt either way, so moving down will cause you to shoot a few pixels lower which is annoying although not as annoying as the fact that the bombs are also affected by your x-axis movement.  This really becomes a problem when you are trying to not blow up the apparently incredibly important trees in the game.

I know that arcade machines never had analog controls as such but even so, why would you introduce three elements that remove the precision from the gameplay?  It only has the effect of making things more frustrating and while we’re on the topic of frustration:  the levels.  Level 1 is pretty tricky and takes a bit of getting through (thanks to those controls and the annoyingly persistent enemy missiles) but level 2 adds these auto-aiming turrets, surface mounted things that will easily blast you out of the sky if you don’t land a bomb on them.  Combine those with their positioning and that f***ing weird aiming mechanic and death becomes far too common to be fun.

Death means returning to the start of the stage no matter how far through you are.  No checkpoints, just frustration.  But it gets worse.  Remember that menu option (practice from best level reached)?  Well that sounds pretty self-evident right?  Wrong.  After eating shit on level 2 for far too long (a level by the way that goes from being really hard in the middle to insultingly easy once you get past those turrets) I got to level 3 which also had a tricky turret section and a bit where you are in a narrow canyon that has guns above you.  Death was almost unavoidable but never mind, let’s go back to the BEST LEVEL REACHED, yes? 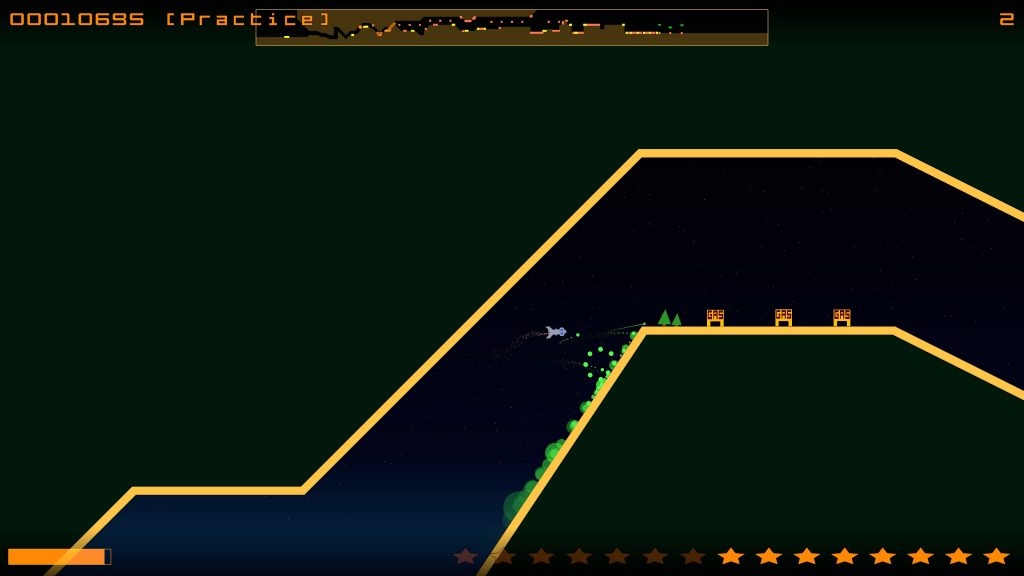 No.  It should say ‘best level completed’ because it put me back to the start of level 2 which to be fair had now started to feel a bit easier but this game is sloooooow and each level feels like it takes ages (in reality it’s just close to four minutes) but this is basic stuff.  Stuff that would have been picked up with more effective playtesting (the game credits just two QA testers).

Retro throwback games are very popular (if not to buy then at least to make) but if you’re going to take on an established classic, you need to beat it at its own game, otherwise you can look a bit silly putting out a game that isn’t better despite having much improved technology and the benefit of learning from decades of videogame history.  That’s kind of the case here.

Look, Terra Bomber isn’t a terrible game.  It’s playable for the most part but the challenge comes from bad design, not a well-developed level of challenge.  The controls are unnecessarily weighed down by mechanics that add nothing.  Scramble only had five stages (that then looped indefinitely) but they were all quite varied, Terra Bomber has ten but they are all the same (from what we could tell).  Scramble is clearly the better game and that’s because Scramble IS a good game but also because Terra Bomber isn’t trying hard enough. 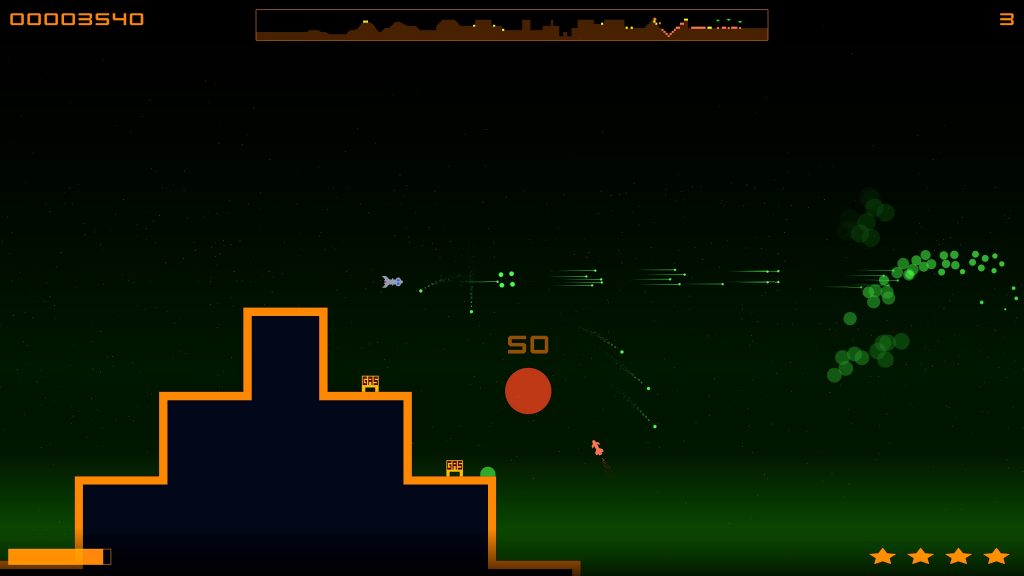 On the plus side, the game’s minimalist visuals look alright(yes that it feint praise but this is an eye-candy genre and we’ve been spoiled by shoot ’em ups generally looking gorgeous with games like R-Type, Gradius V, G-Darius and all those delicious Cave shooters) and we do like having upgradable weapons.  That said, the bombs don’t upgrade and most of your problems come from above and below, not in front of you.

The sound is pretty odd with the basic sound effects really drowning out the music (at least you can change those settings) which is an actual orchestral recording of Wagner’s Rise of the Valkyries which sounds unusual in a game like this but doesn’t ebb and flow or link to the action in anyway and so feels like a bit of a cheap victory, especially when you’ve got our favourite game of the year, another 2D shoot ’em up, Freedom Finger really using it’s fantastic soundtrack well.

If they at least patch out the ‘best level reached’ thing, then Terra Bomber will improve a bit but this is a game that just isn’t good enough in any regard to be taken seriously as a homage to the game it most imitates.  There’s a level of challenge there that might be appealing to some but this is a game that will likely be forgotten unless they give it a major rehaul.

Review 0
4 Overall
Pros
+ Has a fairly slick minimalist vibe to it
+ Is at least quite playable
Cons
- Inertia and weapon aiming add nothing positive
- Level designs are challenge at best but pure bullshit at worst
- Isn't as good as Scramble and that was made in 1981
Summary
If you're going to take on a 1981 arcade classic with modern day (almost) cutting edge hardware then you'd better come correct. But if you ignore what made that game a classic and add game mechanics that make things worse, then that's a little embarrassing. Terra Bomber may pander to the fond memories of Scramble fans but ultimately it'll alienate them most of all.