Super Hydorah is an authentically retro-flavoured horizontal shoot ’em up from Spanish one-man dev studio Locomalito and is out now for PS4 and Vita as a cross-buy title.   It is very much a game that is aware of the history that preceded it.  This extends to all aspects of the game with the graphics, enemy patterns, bosses and old-school level of difficulty making it feel like you’ve stumbled across an arcade ROM from the ’80s that you somehow managed to miss over the last few decades.

The game itself starts off very traditionally with the first two enemy waves coming straight from the 1985 arcade game Gradius.  As they arrive in single file, yielding power-ups as each line of enemies is dispatched, the familiarity of the immediate challenge is almost disarming.  And for a (very) short time the game eases you in relatively gently. 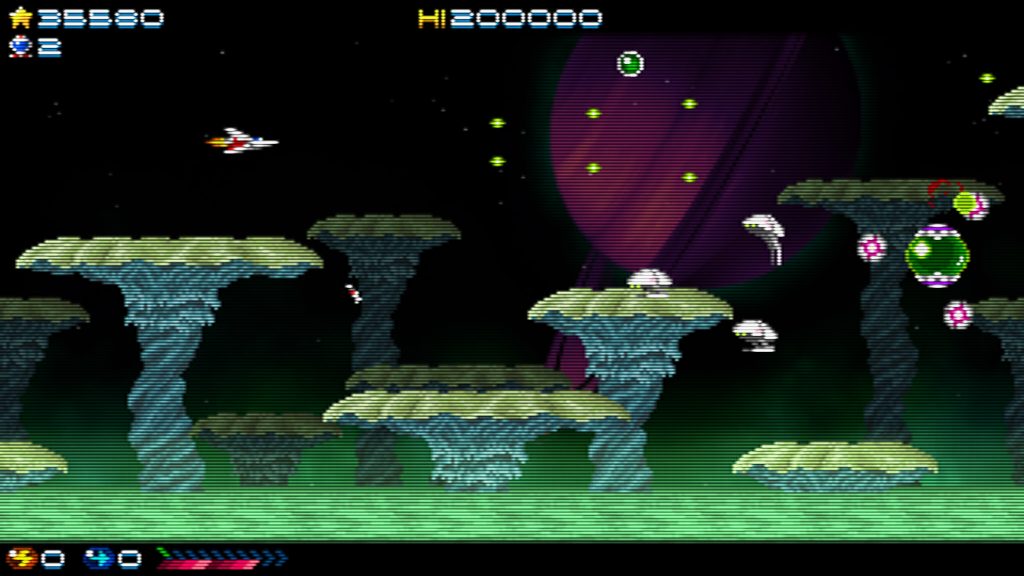 The first level ends with a reasonably straight forward boss battle that then grants you your first new weapon.  Rather than the systems used in Gradius, R-Type and Side Arms, weapon upgrades aren’t available to you right away, you need to beat levels to get at them with each beaten stage granting you a variation on your standard gun, your bomb/missile/option and your powerful secondary weapon.

The next level follows the same pattern but after that you start getting a choice of levels as your path branches.  Where you go is up to you but if, or more appropriately when, you lose all your lives you can try your luck in any available level choice that is open to you, which is quite a nice touch when you hit a brick wall with a level. 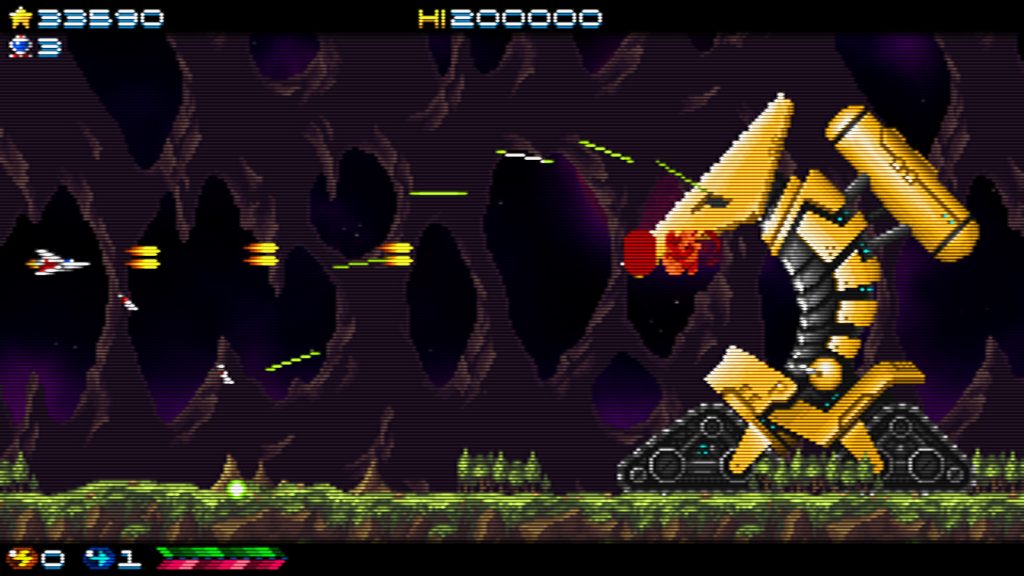 Where the game lets itself down is with how quickly and regularly those walls come.  Super Hydorah is almost unreasonable when it comes to difficulty.  It doesn’t use that whole bullet-hell gimmick either but rather it just has enemies, and enemy firepower, placed in such a way as to provide the most difficulty.  You’ll soon find screens full of hard to dodge enemies funneling you into smaller and smaller areas, something that is compounded by the fact that while the environmental obstacles can get in your way, often enemies, and their shots, are unaffected by them.

The net effect of this is that the game ends up relying a little too much on memorisation for my tastes.  Death can come pretty quickly, sometimes with no signposting (and even from off-screen enemies) and the cost of dying is pretty high.  Yes, the game has infinite continues but the checkpoints on a level are pretty much limited to the start of a boss battle, and just after (if there’s a mid-level boss) and dying will cause you to lose some of your weapon power and items.

Given that the levels themselves are no joke, it is pretty demoralising to get to a boss battle fully powered-up and then die, leaving you far less well equipped for the rematch.  But then that’s just how the game is designed.  Genre experts will love it but casual players may end up thinking that they’ve wasted their money.  Personally I appreciate what the game is trying to do, but god damn it it tests my patience too. 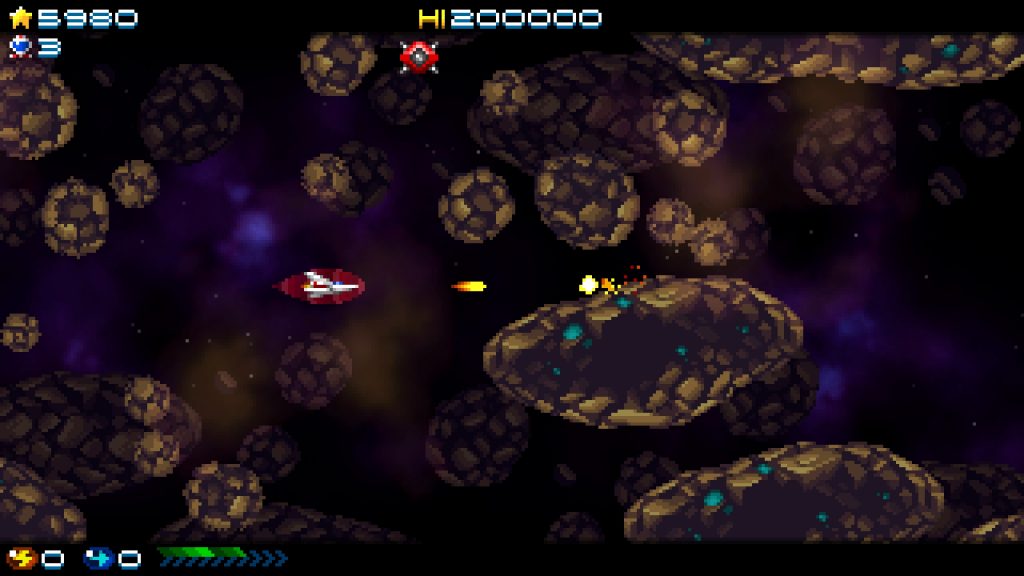 As a fan of shoot ’em ups, both modern and classic, I’m certainly enjoying this just for feeling like some sort of lost arcade title from the ’80s.  It doesn’t quite have the tight level design of Gradius, nor does it have the spectacular visuals of R-Type.  It can also feel like you’re under-powered for the challenge that you are facing.  R-Type may have been ferociously difficult but it at least allowed you to fill up the screen with plasma death, which made you feel a little less impotent against the threat of the Bydo Empire.

Indeed, there’s nothing really special here in terms of the visuals.  It looks authentic for sure (especially when you turn the scanlines on), but there’s maybe a little lack of ambition when compared to the games it is inspired by.  The action is relatively clear though with the cheaper deaths being more about the speed and spread of bullets than their clarity.

While Locomalito is behind the gameplay and graphics, the game’s soundtrack is handled by Gryzor87 who has done a great job.  The music fits the ’80s shoot ’em up style and he’s put together dozens of tracks, of which all the ones I’ve heard are decent.  It’s just a shame most of them are placed tantalisingly beyond my grasp because of how hard the game is. 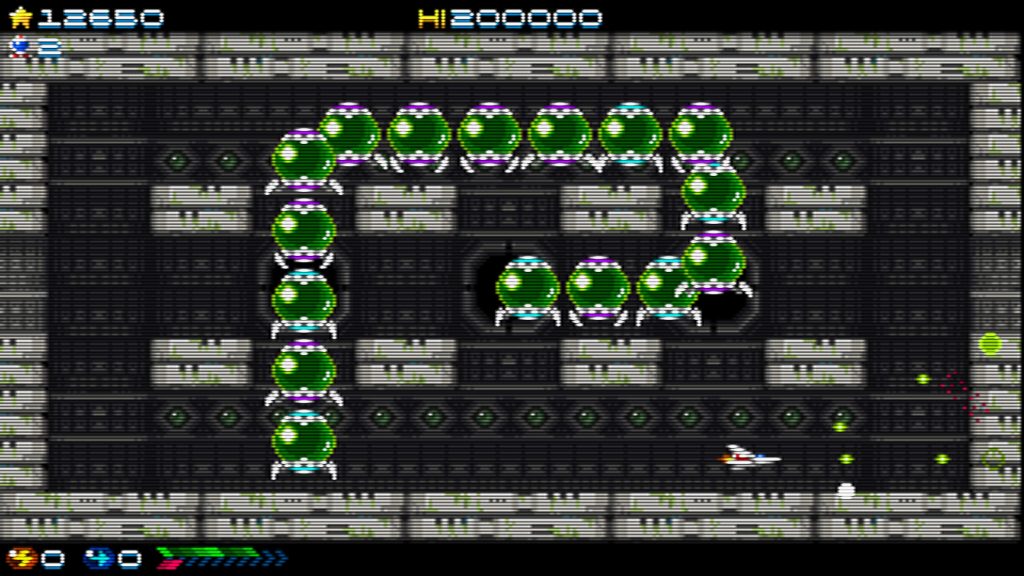 Ultimately, we’d have liked to see more options.  Like replacing the infinite credits with a limited amount but allowing you to pick up from where you last died rather than sending you back to a far away checkpoint.  An easier difficulty would have helped casual players and content tourists to see more of the game too.  They have put in a local two-player co-op mode though and there’s even a fun little mini-game available that sees you dodging enemies with your co-op buddy and killing them with a laser that links you both.

Fans looking for an authentic, and challenging, shoot ’em up will probably love this.  The more human among us may just find it all a bit too much.  But either way, this is a very solid effort from a talented developer.

Super Hydorah
7 Overall
Pros
+ Authentic coin-op feel
+ Solid shoot 'em up gameplay
+ Great soundtrack
+ It's nice to see the Vita supported
Cons
- Is a bit too difficult to be fun at times
- Graphics are good but never amazing
Summary
Super Hydorah isn't aiming to be the greatest shoot 'em up ever. Instead it just wants to be authentic to the spirit of the '80s coin-ops that inspired it and it does that exceptionally well. Fans of classic arcade games will enjoy the old-school visuals and gameplay but the hardcore difficulty will alienate anyone who isn't prepared for it.