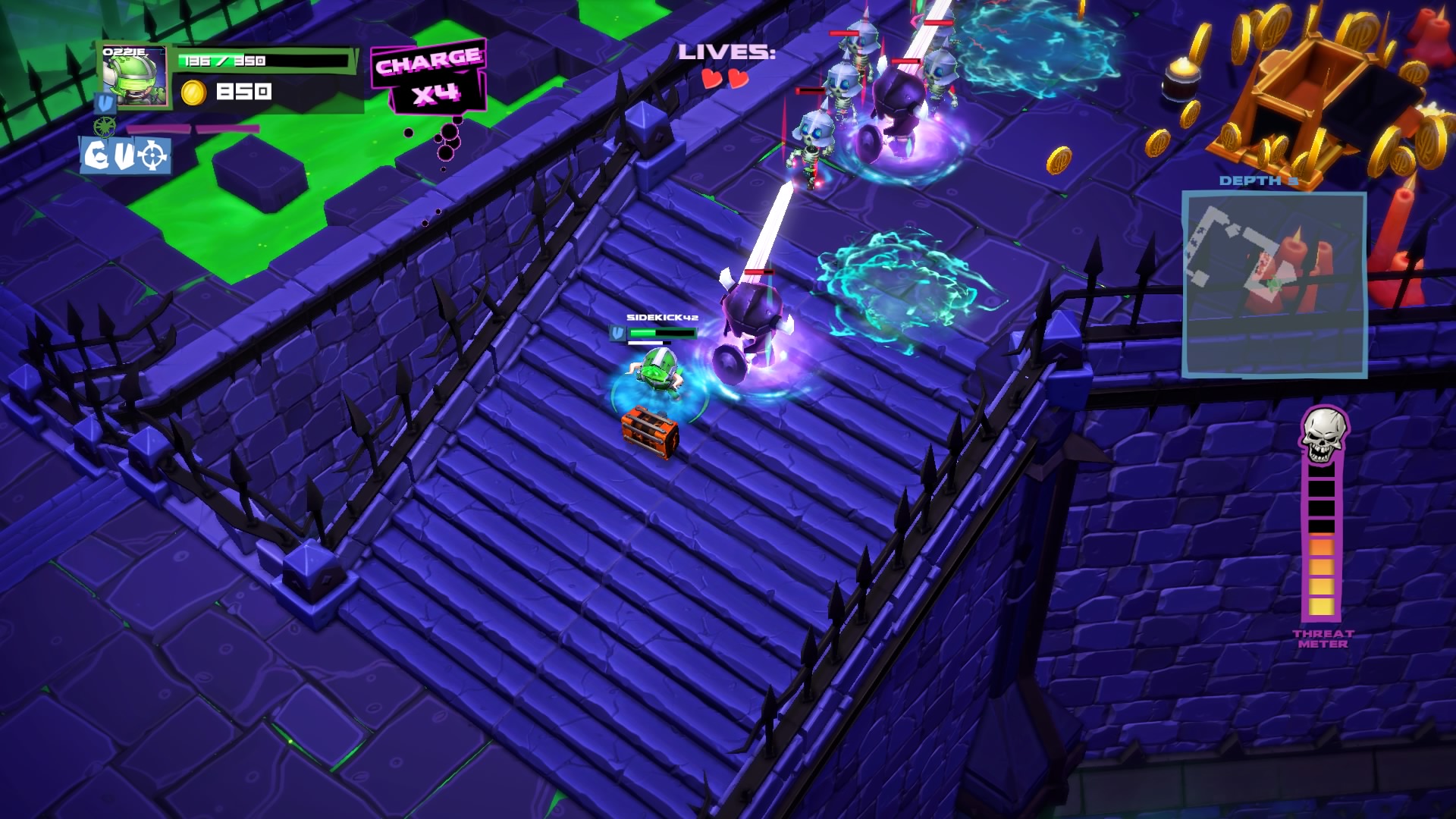 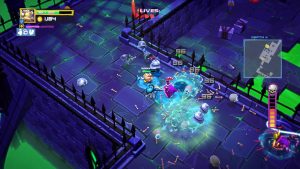 In the beginning there was Gaunlet.  This set the bar high for co-op play with four of you gathered round the arcade cabinet killing monsters and not shooting the food.  To think this was released in 1985 over 30 years ago.  Gauntlet was so successful that it rightly inspired countless other games and sequels, arguably creating the dungeon crawler genre in the process.  Super Dungeon Bros is the latest entry in this genre and has now made it onto the PS4.

You get to choose from one of the four titular bros as you start your quest and whilst each is easily differentiated by their colour, there is no other difference between them.  Should you wish you can also download some DLC which opens up four sisters to play as which is a nice touch.  The game is typical dungeon crawler fair and played from a top down view.  Your bro can kill everything in their path but must make it the portal at the end of each map to finish the level.  The levels are randomly generated which tries to add variety to fairly straightforward game but just results in the levels being instantly forgettable.

As you make your way through the dungeons there is a threat gauge which gradually fills over time giving a nice risk/reward mechanic to proceedings.  You’ll be choosing between trawling the levels for all the gold but in turn making the levels harder, or just running though them as quick as you can in order to beat the difficulty increase.  Movement feels somewhat loose here and the way the attacks are mapped to the shoulder buttons on the default setting makes the game not enjoyable to play, no one wants to be hammering the trigger buttons repeatedly to attack as this just makes your fingers ache.

As each bro plays the same it’s down to your choice of weapon to add some difference between them.  What this boils down to is a range of smashy weapons, such as swords or hammers or a shooty weapon such as a crossbow.   Each weapon comes with a special move too which can help you clear the levels when things get hectic, as they often will when the baddies start coming.  These weapons can be upgraded on the main menu to make them hit harder which ensures killing the baddies is an easier task. 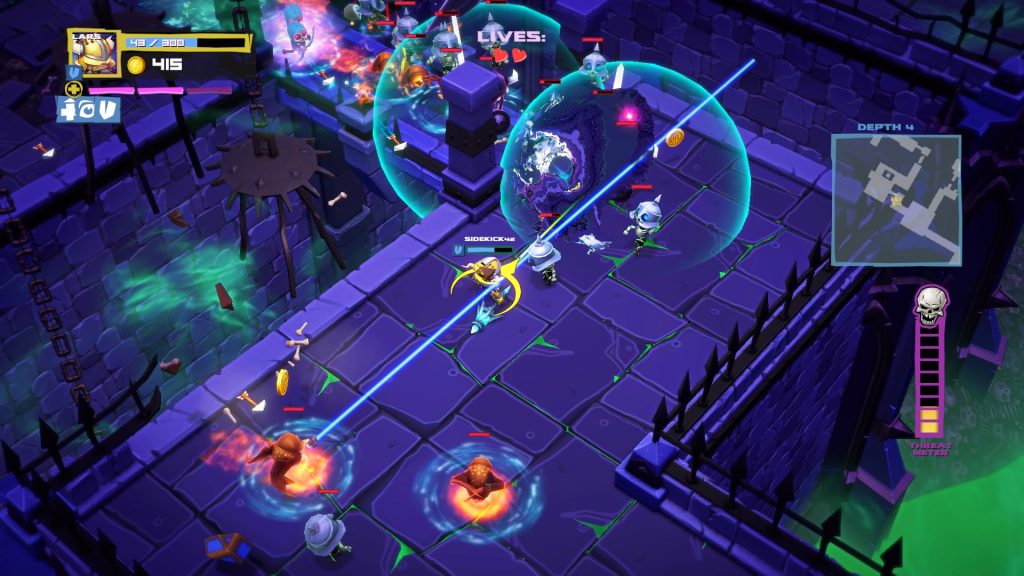 The game does like to throw loads of baddies at you and often the screen will be full of action as you are frantically trying to get your act together.  Unfortunately it felt that this wasn’t balanced to a single player experience, as I found crowd control to be particularly difficult due to the smallish areas and the volume of baddies.  Things got a little better when I was able to rope a second player into the game but to get the most out of this you’ll want to be looking at a four player experience which just isn’t going to happen with this game.  I tried searching online at different times of the day for other players and found none.  With no one playing this game online you are then left with an ostensibly single player experience, which isn’t the best way to play it.

From a presentation point of view things look the very epitome of bland with generic characters baddies and music.  The levels are also pretty bland which is likely to allow them to be randomly generated, but means they are totally forgettable.  I also experienced three hard crashes on this game which isn’t great by any stretch. 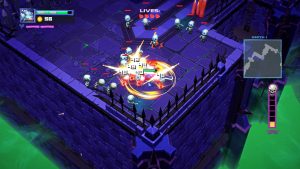 Super Dungeon Bros is the very definition of average, with bland art style forgettable level design and floaty controls.  Whilst more fun can be wrought out of the multiplayer the chances of finding other people to play this game with is near non existent.  As a result you’re left with a single player game which seems to be poorly balanced and liable to crash.

Super Dungeon Bros
5 Overall
Pros
+ Plays ok if you can find the people to play it with + The threat gauge adds a nice risk/reward strategy to the game
Cons
- It's dead online with no chance of co-op unless your mates own it - Game feels unstable and crashed for me - Controls are a bit floaty and mapped all wrong in the default control scheme - Poorly balanced for a single player experience
Summary
Super Dungeon Bros is the very definition of average, with bland art style forgettable level design and floaty controls. Whilst more fun can be wrought out of the multiplayer the chances of finding other people to play this game with is near non existent. As a result you’re left with a single player game which seems to be poorly balanced and liable to crash.