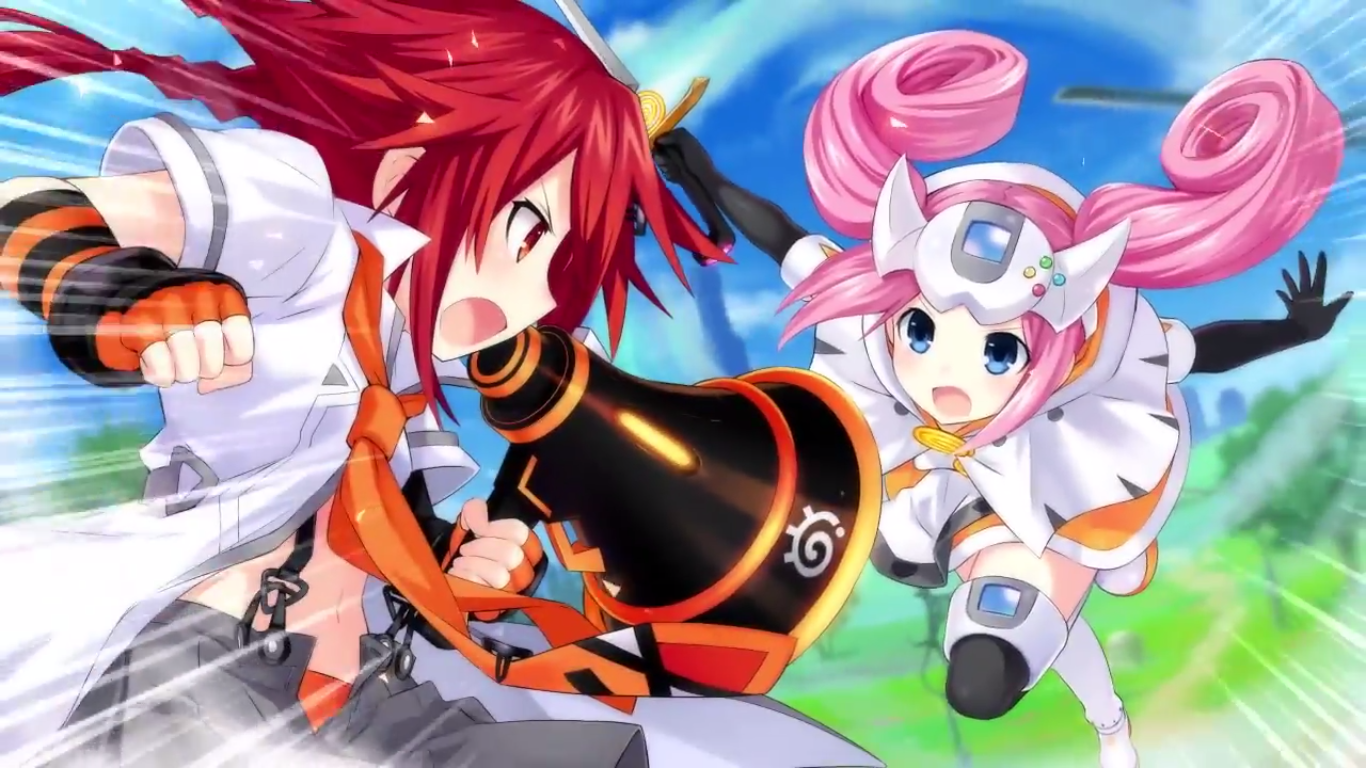 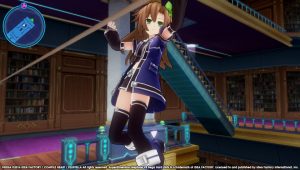 For a series that is only about six years old there are a lot of games starring Neptune and her goddess friends/enemies. Between spin-offs and remakes they’ve passed ten entries already. Superdimension Neptune VS Sega Hard Girls is in the spin off camp, where some of the characters (not all) from the Hyperdimension Neptunia series are paired up with the Sega Hard Girls which is a multimedia project from Japan.

The two are a decent fit as the original idea for Hyperdimension Neptunia was to anthropomorphise games consoles into cute girl characters, which is basically what the Sega Hard Girls are except they concentrate specifically on Sega consoles. In both cases though what starts out as an interesting idea ends up being a little superficial. You’d struggle to identify which character is which console by appearance and their personalities are just anime stereotypes. You get the odd clever nod like Game Gear being thirsty and asking for six drinks (the Game Gear required six AA batteries) but they’re few and far between. Bit of a missed opportunity but not the end of the world.

The co-protagonist is IF, a self professed adventurer who lives in a Mad Max style dystopian future. At the beginning of the game she is looking for the Grand Library to take in some knowledge. On the way she catches Segami, a girl falling from the sky. Segami remembers her name but not much else (amnesia, natch) and they both enter the Grand Library together. Shortly after arriving history starts disappearing from the library and Histoire, who oversees the library, tasks IF and Segami with fixing history by travelling back in time using a time travelling motorbike. It’s pretty much all nonsense.

If you’ve played a game in the series before you might recognise the names but this title acts as if the characters have never met before, though Neptune is happy to break the fourth wall, referring to the player and the game as she often does.

Going through time leads to four eras: the Mega Drive era, Sega Saturn era, Game Gear era and the DreamCast era. Unfortunately again this isn’t capitalised on, as each era generally looks the same with the same locations. You’ll get the odd unique location or a forest might turn from green to brown but overall you’ll be hard pressed to see which era you’re in from the dungeons themselves. On top of that if you’ve played one of the games before you may recognise locations and music tracks from those games. I’ve only played Re;Birth 1 and had many bouts of deja-vu throughout.

Does it play like the other titles though? Yes and no. You enter dungeons from a world map which will take you to small locations to explore with enemies roaming within them. You can jump and do some basic climbing to help you explore. Touching an enemy will take you into a battle arena to fight, if you strike the enemy you get to go first whereas if you’re taken by surprise the enemy will get the first attack. The battles themselves are slightly different in that you have an action meter which dictates how many actions you can perform before your time is over. Moving your character within the 3D space of the arena uses up some of the bar, attacking will use some, special moves will and so on. 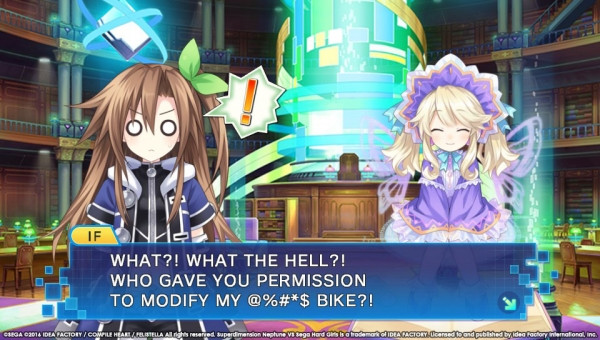 The bar is split into three parts; ending your move in the first part will make your character block, the second will mean your next turn will come around in an average amount of time but if you go into the red section then you’ll have to wait longer for your character to be able to act again. It adds an element of tactics to the fighting where you can go for a bit of extra damage or play it safe and hope you get another go in before the enemy hurts you too much.

Generally the normal fights you find in the dungeons are very easy, with the odd exception. However like a lot of JRPGs I’ve played recently the boss battles ramp up the difficulty a lot so breezing through a dungeon doesn’t necessarily mean you’re ready for the boss at the end of it.

Luckily the way the game is structured means if you do get stuck chances are you could go elsewhere and do something else. Back at the Grand Library is a list of missions to take on. You can only take on one at a time and they can vary from basic stuff like kill a certain number of specific monsters or collecting materials to story based ones which might just mean going to a location and moving the story on or tackling a boss fight.

Turning in a mission moves on one unit of time (I’m not sure what that unit is) and certain missions will expire. If you run out of missions to do you have to face the Time Eater, the guy who’s destroying time itself and making the world a terrible place. The more missions he eats the stronger he is, so the more missions you complete the more you weaken him. If you lose to him then don’t worry, time gets reverted to the start of the game but all your progress is kept (missions completed, levels and so on). So other than conceptually I’m not sure what the point is as after you’ve lost you just continue on from where you left off. You could theoretically grind up to defeat the Time Eater early but it wouldn’t be worth the effort and you need to complete all the missions for the ‘True Ending’ anyway. 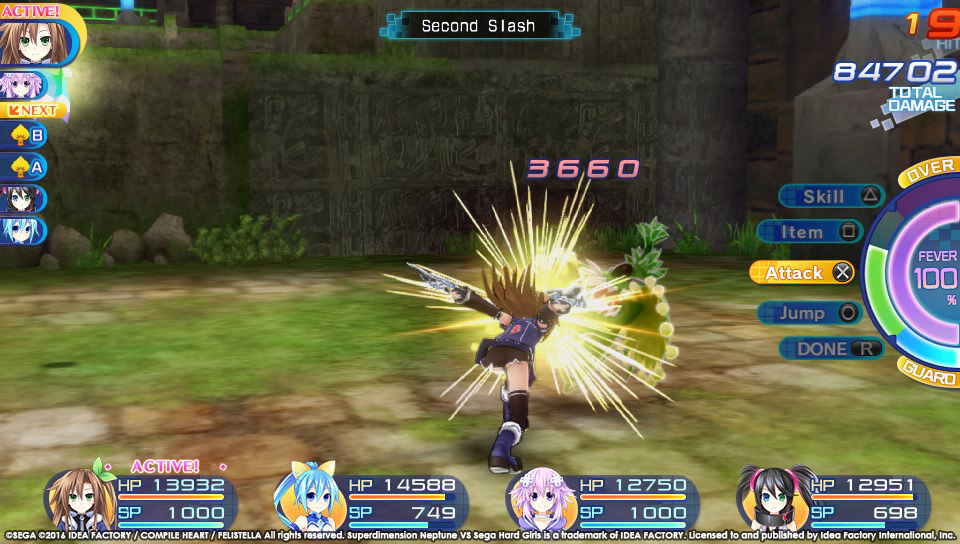 Now I can see that I’m pointing out a lot of minor faults with the game but here’s the thing, I had a lot of fun with it. I could have written this review a little earlier but I just kept playing it. The mission structure has that “I’ll just do one more” effect that keeps you playing way beyond your intended time and you can knock a few out at a decent rate. The battles take longer but aren’t too difficult for the most part and can be avoided if you want. As you progress you unlock new ‘Game Settings’ which streamline certain elements of the game as well, such as being able to kill weaker monsters on the world map without entering a battle or earning extra experience. These feel like true rewards for progressing with the game and eliminates most of the grind towards the end.

The end game does come around sooner than you might expect from a JRPG at just over twenty hours but there is NG+ if you missed anything the first time around or want to continue playing. It is a full price release but I don’t see the length as a negative. The mission structure reminded me of Mass Effect 2, where you spend a lot of time assembling your crew but then after a couple of ‘Save the World’ missions the game is over which may annoy some.

The characters will irritate a lot of people however. I think I’m a special case where I don’t actually like the characters but I can deal with it. I know many people will like these characters (and do from the previous games) whilst others will be put off instantly. All of the main characters are verbally aggressive to each other constantly and they go off on a tangent in almost every scene to try and be funny or quirky before another character (usually IF) has to say “Anyway…” to get the story back on track. It happens so often that I found that funnier than the actual jokes.

The majority is voice acted in either English or Japanese depending on your preference, but I suggest if you’re not a fan of dubbed anime then you should go for the Japanese option as there is a lot of talking and even as you’re exploring you’ll hear the same voice clips over and over. Beyond that the presentation is fine. I knew a lot of the music tracks already but they are good tunes and the graphics look fine if a little under detailed. 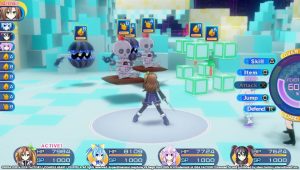 As stated earlier though, I just had a lot of fun with this Superdimension Neptune VS Sega Hard Girls. The story is a bit throw away, the locations repeat too much and the characters are annoying but you’re never in one place for long and the mission structure keeps you playing as you always want to do one more. Add to that the ‘Game Settings’ feature smoothing out the grind towards the end of the game and, depending on your tolerance for the characters, you’ve got a highly enjoyable game.

Superdimension Neptune VS Sega Hard Girls
8 Overall
Pros
+ Mission structure always gives you something to do + Game moves at a fast pace + 'Game Settings' feel like rewards for progress
Cons
- Characters are a bit annoying - Lots of reused assets - Boss battles bring a spike in difficulty - Might be too short for some
Summary
The characters will annoy many but this game has it where it counts. The mission structure keeps you doing "just one more" whilst the 'Game Settings' truly feel like rewards. If you're already a fan of the series then you're in for a, albeit slightly shorter, treat. Others' mileage will vary depending on their tolerance for the cast.