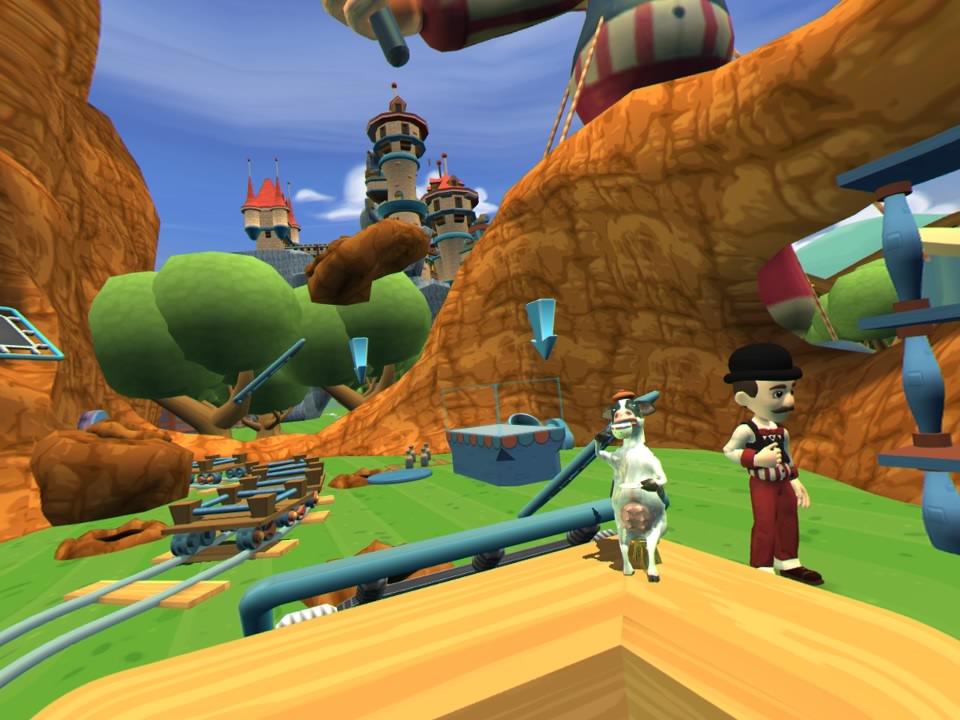 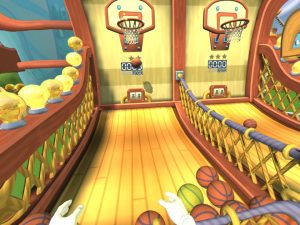 So, this is a surprise.  I wasn’t expecting to like Carnival Games VR.  It’s a very early PSVR title that comes by way of the Nintendo Wii and is widely regarded as shovelware.  And while those dsadsadsadsadsadsaWii roots are pretty evident, it is actually a pretty decent fit for PSVR.  Think about it.  Most PSVR owners have blown a large chunk of their disposable income at the hardware and you want as much gaming bang for your buck as possible, so a compilation of mini-games could fill a bit of a niche.

We recently reviewed Sports Bar VR which plays a good game of pool and air hockey, a mediocre game of darts and a not-very-enjoyable game of skeeball.  It was worth it for the pool, just about, but the overall package was weak.  Carnival Games VR improves on it by offering loads to do and leaving it up to you to figure out what your favourite games are.

The overall setting is a carnival, as you might expect, and the game keeps you away from the rides and has you playing around where the side stalls are.  There are four areas and each one has three games in it, new areas (and games) are unlocked by doing reasonably well in the available events.  You’ll unlock everything in an hour or so, which begs the question ‘why ever lock the events down in the first place?’ which is a good question, reader.  Well done.

As an overall structure, there’s not much to talk about.  You play games, earn tickets and spend those on prizes.  Some prizes unlock those other events but most just end up in the playroom area where you throw them at things for roughly ten seconds before getting very bored.  Aside from that, you have the mini-games and it’s best to review those individually, so here goes. 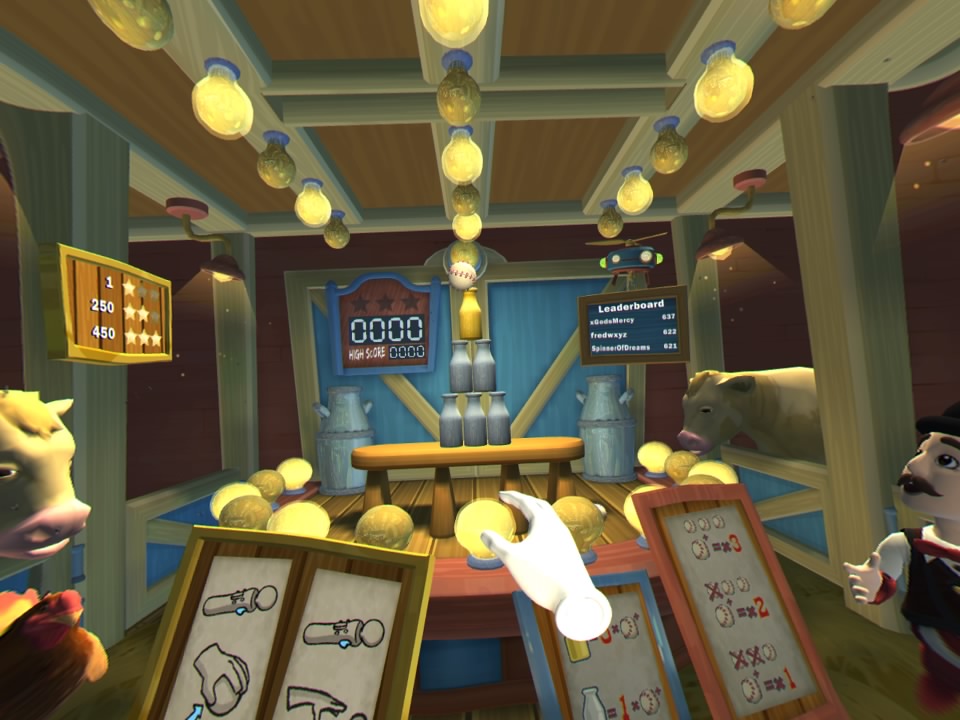 Starting out in Cowpoke Corral, we have Shooting Gallery, Golden Arm and Alley Ball. Shooting Gallery is a relatively simple shooting game where the two Move controllers act as guns (much like Until Dawn: Rush of Blood). You build up your multiplier by not missing but this is pretty tricky. The mode is pretty short-lived but getting three stars on it will take a lot of practise. Alley Ball is pretty much the skeeball mode from Sports Bar VR. The controls are better and while it’s not a very good mode, it’s a lot more playable here and is an okay diversion. Golden Arm is the best mode here. You use the Move controller to throw a ball at some jars. Each round gives you three balls with which to hit all the gold jars. The addictiveness is real. And the quick restarts make this almost impossible to put down.

Wizard’s Walkway offers you two throwing games, Ring Toss and Pop Darts, the former being a very enjoyable ‘throw the ring onto a peg’ game while the latter is a very tough darts game. It’s way better than Sports Bar VR’s darts mode but it’s still pretty tough and not that much fun. Many users complained about the tracking here but I didn’t have any issues with that. I was able to earn two of the three stars but it didn’t hold my attention.

The star of this area, and the whole game, is Climbing Wall. Using the triggers on each Move controller to grab the scenery, you literally climb up a wall with obstacles, disintegrating hand-holds and chains using the controllers. It totally works. It even knackers your arms out. The sense of actually climbing is incredible. The mode itself is pretty tough but it’s great. They need to make a whole game of just this. 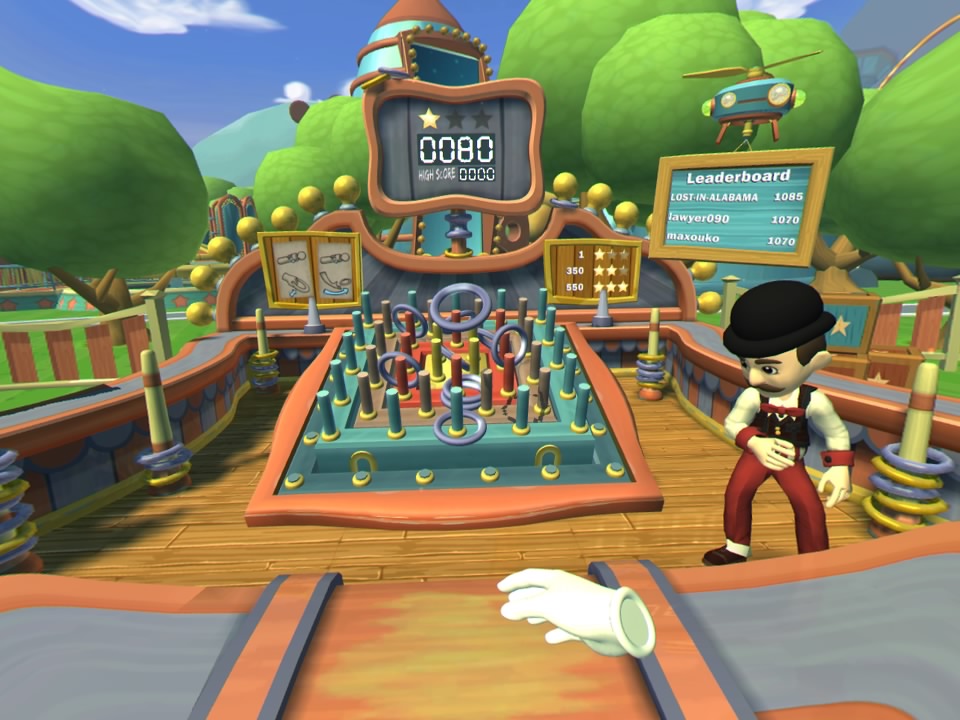 Gizmo Grove is next and offers Funnel Cake Stacker, a brilliant mode that sees you catching funnel cakes on plates. The trick is to keep everything balanced while being quick enough to catch the cakes. It’s glorious fun, if a little too easy. Shark Tank is basically the same as Golden Arm in terms of mechanics but has you aiming at a single target in order to dunk someone in water. It’s not nearly as addictive as its companion mode. Last up is Haunted House, another shooting gallery game. This time it is set on a ghost train and plays much like a much shorter, less threatening version of Until Dawn: Rush of Blood. It’s over all too quickly.

The final area is Sports Station and it’s a real let down. Swish sees you three pointing basketballs and isn’t very interesting or fun. Down the Stretch sees you rolling balls into holes. There’s some sort of AI competition in there but you don’t really notice it, you won’t notice any real fun either. Last up is Fast Pitch which sees you catching fastballs with a baseball catcher’s mitt. It’s actually quite good but savagely difficult, which soon strips the fun away. 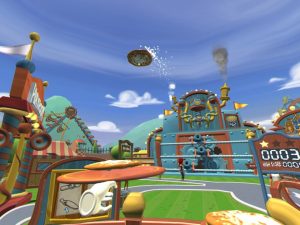 Of course, you might see it all very differently. Either way, you’re bound to find some events in there that you like. There’s certainly a few in there that make this worthwhile for me and the VR experience, as cartoony as it is, does add to it all. It’s more of a Move game than a VR one in terms of the gameplay but overall the effect of being there is pretty good. The sound isn’t quite as good though with some really inane commentary on the events.

So yes, it’s not a new era of gaming being ushered in for the new PSVR tech, but Carnival Games VR is simple, unpretentious fun and I really enjoyed some of it.

Carnival Games VR
7 Overall
Pros
+ Golden Arm mode is pure addiction + Climbing Wall is genius + Some other good modes
Cons
- And some rubbish ones - basic presentation
Summary
We've always been suckers for a mini-game compendium and Carnival Games VR has a couple of bangers. It's not all good but with this much variety on offer, you're sure to find something you like here.