We reviewed Ratalaika’s Super Destronaut DX back in 2018.  It was a Space Invaders clone with nice neo-retro visuals but was a bit lacking in terms of power-ups and any kind of meaningful challenge.  This sequel however switches up the genre moving it from the standard one-screen 2D shoot ’em up to a standard FPS.  The only link between the two games is that the enemies are the same Space Invaders sprite designs and the colour scheme is almost exclusively neon magenta, cyan and green with some white in there.

The game has two main modes – Challenge and Arcade.  Challenge offers you a series of thirty short challenges.  These range from killing a number of enemies, keeping a combo going, hitting a high score or collecting money.  The variation there is a bit limited though as ultimately all you’re doing is shooting enemies.  They spawn in in waves around you and you spin around and shoot them with either R1 or R2 (it’s nice that they both work). 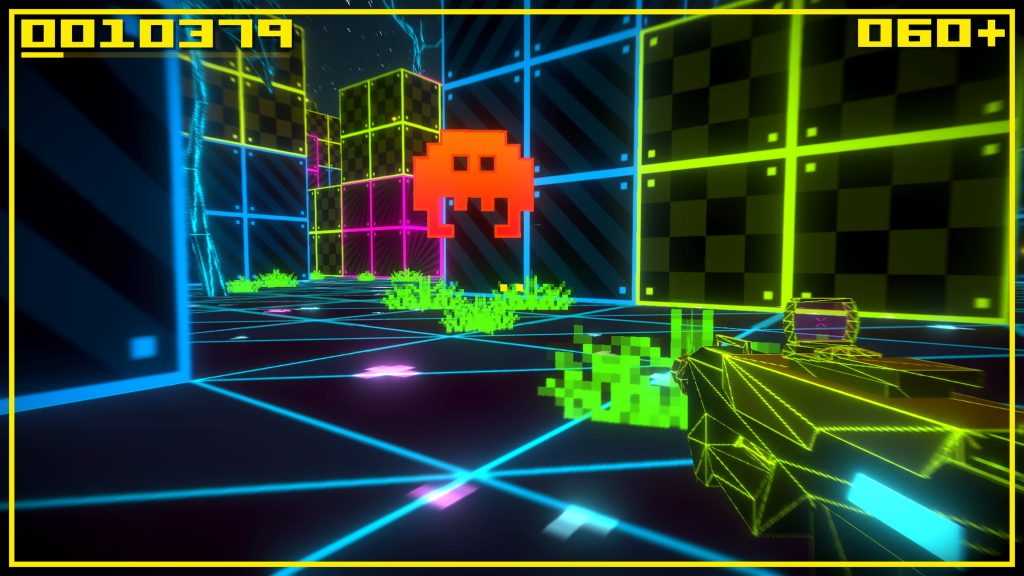 Keep your combo up and you’ll score more and will activate a two-gun ‘rampage’ mode for a bit.  The enemies drop money and sometimes health.  The money can be spent on new weapons, although it’s a slightly fiddly process that did lead to my one and only death in the whole time I played the game.  The weapons are pretty good with a laser gun, shotgun and grenade launcher all available.  None of these are bad weapons but, much like the original game, we’d have liked to have seen more.

The Arcade mode option on the main menu opens up five variants of the game where you don’t have challenges and instead just have to survive.  The variations change the speed and difficulty of the game but we would have a difficult time picking out which mode we were in unless you told us first. 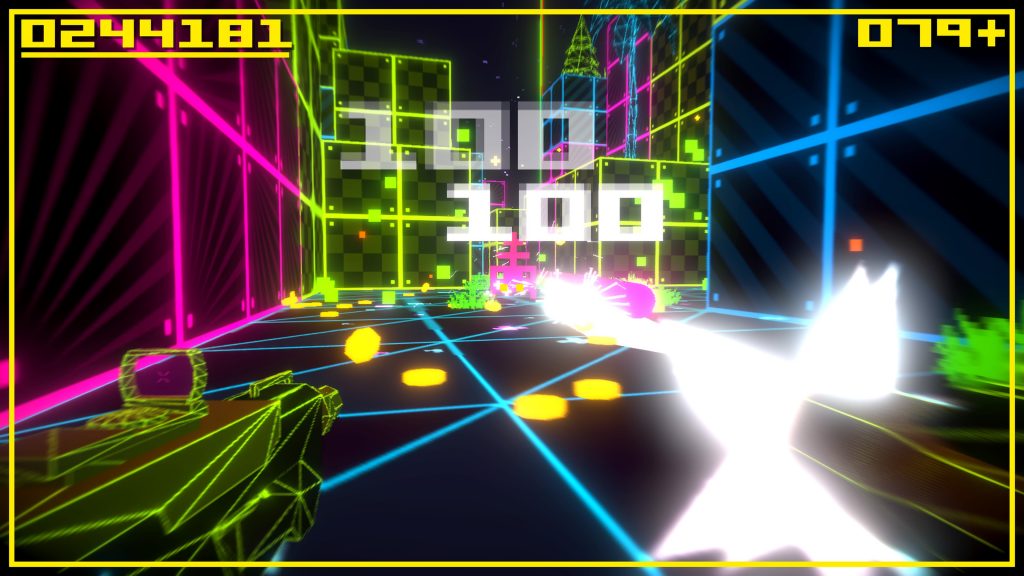 On the plus side, the game’s colourful wireframe backdrops and retro-styled enemies do add quite a bit of charm to the game and the music makes a good go of giving some energy to the whole thing.  It’s a shame that the AI doesn’t really live up to this though.  They slowly move towards you or side-step a bit with no real strategy and their slow bullets mean that the only time you ever really are in any danger is if one spawns behind you.  Given that you’ll still be able to kill it (and it might even drop some health), there isn’t really all that much peril to it.

As a Ratalaika game, it should be of no surprise that Super Destronaut: Land Wars gives up its platinum trophy with minimal resistance but even by their standards this is an easy one.  Thirty minutes  is enough to earn it and you probably won’t lose any lives along the way to the platinum.  The challenge gets a little higher beyond that point but not enough to really add any technical depth.  That just makes the game a little too trivial and it’s a shame because a bit of extra challenge would have really helped this game out.

Anyway, this is a cross-buy game and those retro colours should pop very nicely on those OLED Vita screens but aside from that, this is a very basic FPS that doesn’t really offer anything new to the genre.  The simple block-based level layouts and basic AI pre-date even the original Wolfenstein and Doom games and while it all moves smoothly and looks okay, there’s not much here that we can recommend.