It’s been a couple of years since Kylotonn’s first ventured into road racing. TT Isle of Man – Ride on the Edge 2 represents their second crack of the whip with some key changes in place. Career mode is bolstered, there are more tracks to explore and bikes to ride. With handling also improved, can this all come together to create a racer more enjoyable than the last plucky instalment? 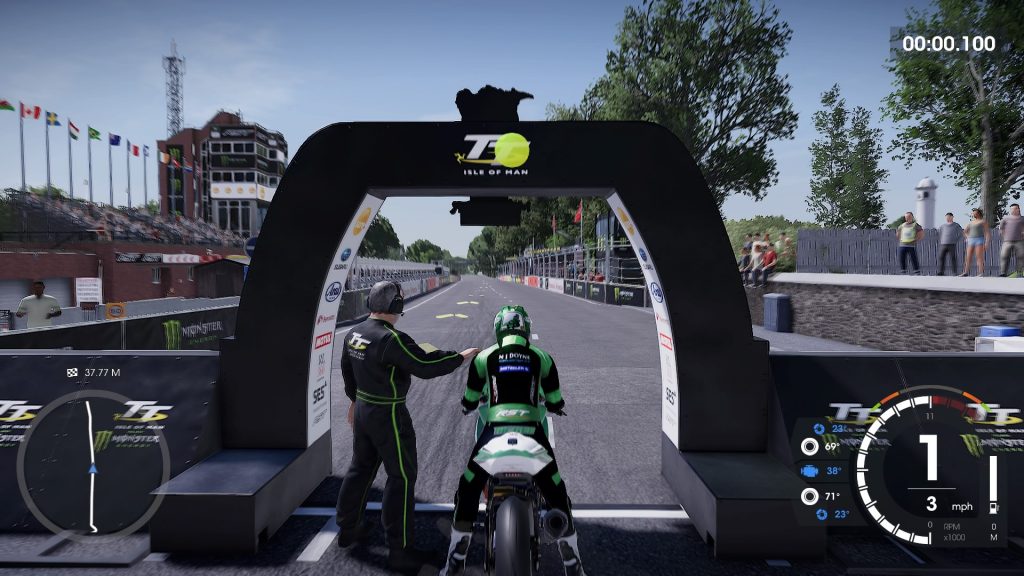 Handling was criticised last time out and some smart alterations have been made. There’s a more consistent feel and each bike has a nice weight to it. You get plenty of movement from the tyres but it’s not as skittish as the last game felt. In all, I felt more in control and could react better to situations going south. The rider still seems grafted to the bike, unfortunately. You see this in crashes as they seemingly don’t react to a crisis. You can save it and there’s been some lenience taken with certain scenarios.

Mounting kerbs or pavements don’t immediately end in disaster. You have more time to play with and you’re allowed to bump competitors and surroundings. Keeping you in the race helps and there’s rarely a case where you’ll fall off for no reason. The bike reacts to bumps and excursions realistically. On the default semi-pro setting, your have to be aware of your front wheel rising over crests and it can be nice to manage wheelies effectively. The danger and challenge is retained but it feels more reliable and predictable. 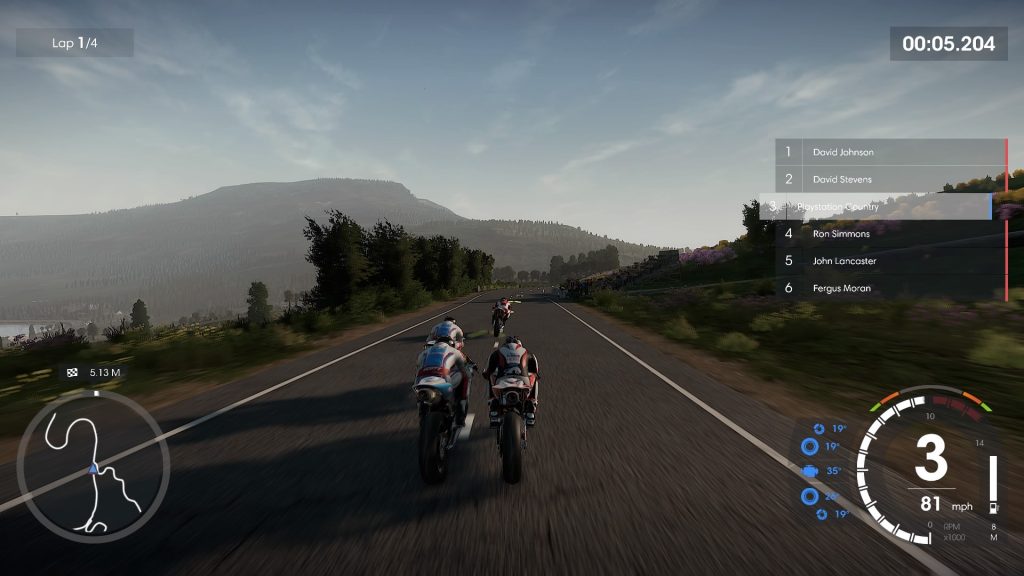 Career mode has seen an overhaul. There’s more to it as it moves from a basic, barren effort into something more substantial. You still work through the season’s calendar but now you have a choice of three events at one time. Each event has a corresponding difficulty with appropriate rewards. It’s welcome, given how tough the original game was to penetrate and gather funds for new bikes. There’s a better flow from event to event and the year builds to the eventual TT races themselves.

When you begin, teams will offer you a ride and they have their own objectives for you to aim for. Again, you’re given a a handful of options and can even run your own team. Some garner a real challenge as you push for podium places and other are more relaxed, rewarding participation in a number of races. It helps take the pressure and frustration away and gives you some room for error.

The mode expands further into challenges that you can complete to gain upgraded bike parts. These parts can be purchased but it’s nicer to get it for free. These challenges are varied from pursuits, checkpoint and endurance challenges. It takes place on a fictional Ireland that becomes a place to roam freely. It’s a well designed landmass and gives you something to do outside of races. It’s a shame these challenges slowly drip through but they’re rewarding to play. 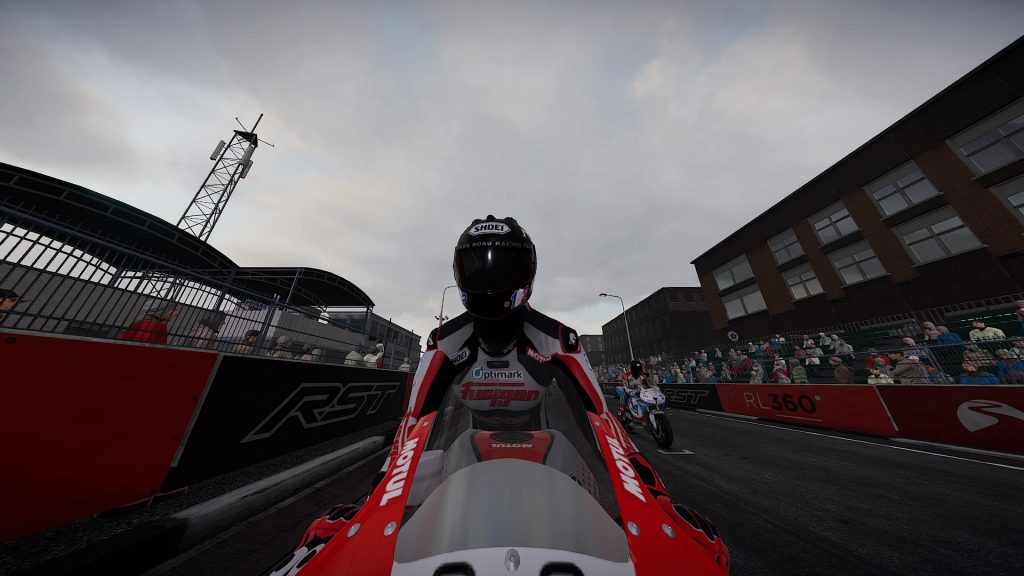 Finally, there’s perks which dole out regularly after each race. These are disposable boosts that can protect money rewards, boost performance and give you a whole range of other benefits during a race. They’re one-time deals but you get enough from competition that you can use them relatively freely. It all culminates to make a more robust career which the series sorely needed.

TT Isle of Man – Ride on the Edge 2 is a good looking game. It does trade some fidelity for draw distance and you really see this on the mountain course. The island is really well modelled with some gorgeous countryside flying by. The sensation of speed looks to have taken a slight hit but sound design does try and reinstate that. Wind shears past you and tyres skip over the surface. When your tyres hit their limit, you hear it. When you’re at the limit of your lean, you’ll hear it from the foot-peg dragging. If you skim a garden fence, you hear it. I think it’s really well done and picking up on these details have given me an appreciation for the effort. Variable weather helps instil a changeable atmosphere, too.

The bikes are all well recreated. Their selection seems a little slim but road racing does seem to encompass a select group. The big riders and manufacturer find their way in. Yamaha was a notable omission from last time but they’re now onboard. The classic bikes are small but admirably represented. It also gives fans a chance to have their own classic TT. 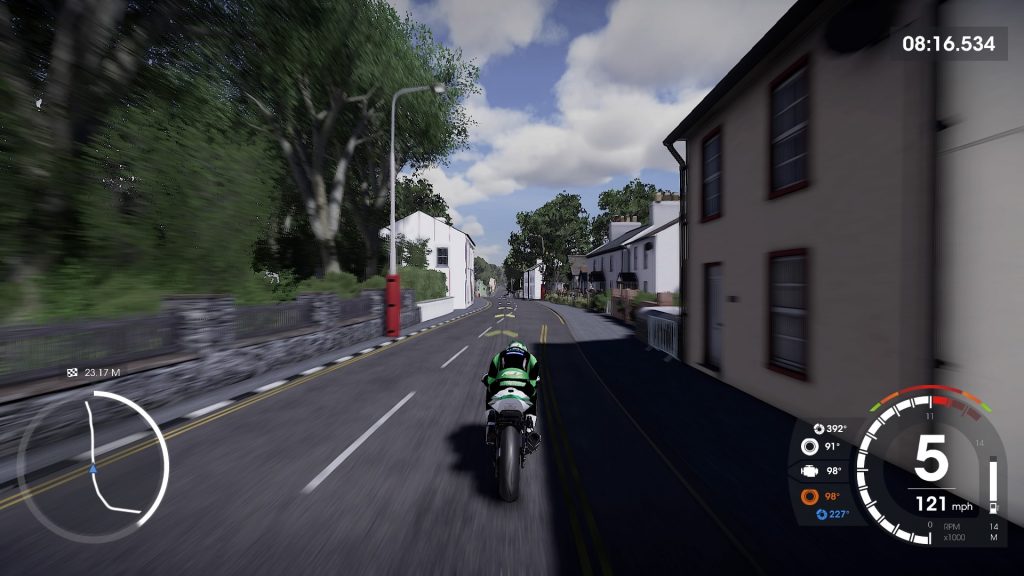 The tracks all have the same care to them. Whilst the mountain carries an authentic feel, the fantasy tracks take inspiration from real locales to present something believable. The Irish tracks have a nice variation to them. There’s some nice coastal routes, airstrips and a lot of rural touches. Villages sprinkle some life next to the track and the island has a fun, roller-coaster feel.

Online’s been problematic. Public sessions are split by location and bike class which seems to unfortunately split users. From looking at the leaderboards, there’s not many people playing pre-release. Hopefully the numbers will get there but segregating the community in such a manner seems like a misstep. Overall, it’s a comprehensively improved effort but there’s still some room for refinement.

TT Isle of Man - Ride on the Edge 2
7 Overall
Pros
+ Handling is much improved and more reliable.
+ Racing seems much more lenient and rewarding.
+ Career mode is now more substantial with more options at your disposal.
+ The new tracks are well considered and variable weather gives them a great sense of atmosphere.
Cons
- Segregating online races by class and location will spread the community too thin.
- Your rider is still clumsily clamped on to the bike.
- Bike selection still feels a little narrow.
- Load times can still feel lengthy.
Summary
TT Isle of Man - Ride on the Edge 2 represents a positive step forward. Handling is improved and feels a lot less skittish and unsure. There's still danger and a good sense of speed with sound design working to great effect. Career mode is a lot meatier with some really smart changes to structure and environments remain carefully considered and well designed. Above all, there's a more comprehensive experience here that should keep road racers satisfied.