Speedrunners is a new release on PS4 from DoubleDutch Games and allows you to put your platforming skills to the test against other players. If you’ve enjoyed Super Meat Boy or N+ at any point then you’ll feel right at home here. 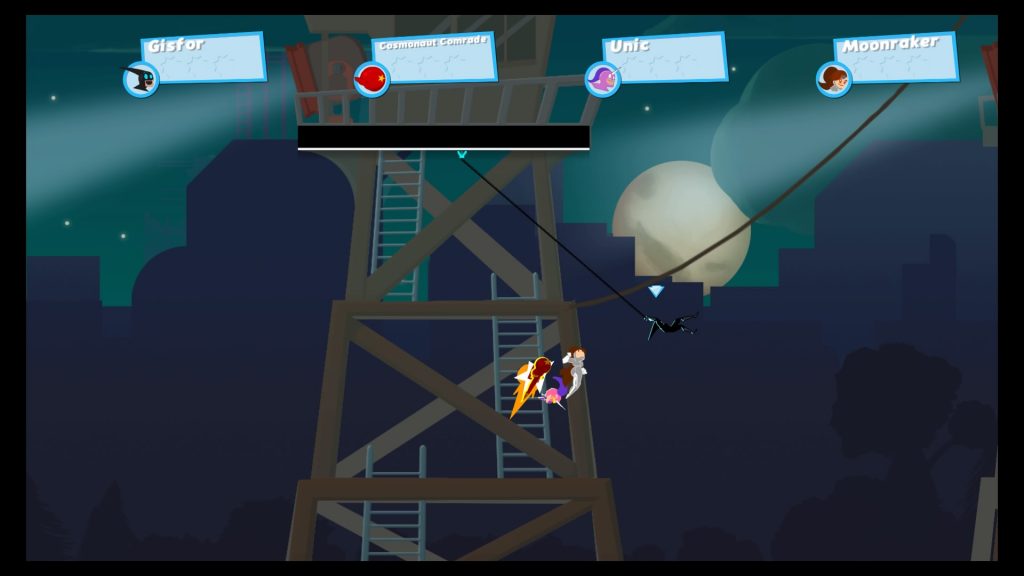 This is strictly a competitive game. You do have a single player experience but that is simply you racing against bots with a very, very basic ‘story’ introducing each level. You have multiple difficulty settings to play but to get through the sixteen stages won’t take you very long at all on the lower difficulties, Unfair difficulty is aptly named though.

It’s the multiplayer which sits at the top of the main menu and that’s where you’ll find an incredibly enjoyable and addictive experience. The gameplay is very simple to describe but requires a similar nuance and precision to the games I mentioned earlier.

Viewed as a 2D platformer the stages are actually tracks which loop, like a racing game. Up to four players race through the stage hoping not to fall behind. Like Micro Machines everyone occupies the same screen so if you fall off the screen you’re eliminated, the last person standing earns a point, first to three points wins. With this comes the similar problem/design choice of the person in first having very little idea of what is in front of them but a certain amount of stage memorisation is required to be competitive. 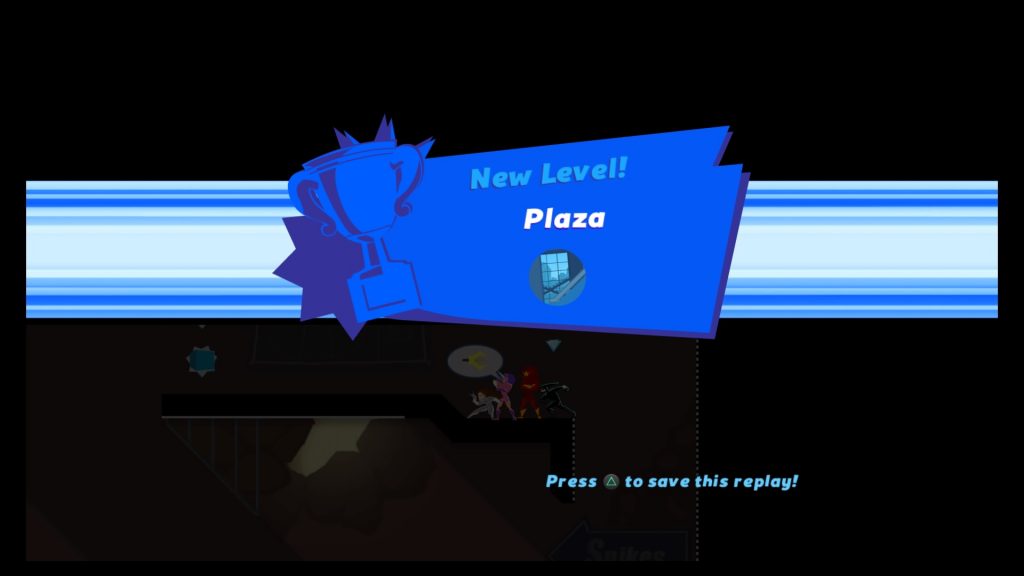 To get through the levels you can run, jump, slide and use a grappling hook to get around. There are always multiple routes through each level with some requiring more skill to navigate than others and the person in front can often hit switches to try and put those behind at a disadvantage. You can only grapple onto white ceilings though these are common enough for you to always be on the lookout for them and grappling is always fun and if done correctly is a great way of gaining speed.

There are boost areas which fill a turbo meter which you can use at anytime and pick ups which are like Mario Kart style weapons. You can drop boxes behind you for your foes to stumble on, drop a bomb which you can detonate manually, use a grappling hook to grab the person in front of you and basically switch places, shoot a pulse which pushes people away, fire a rocket, throw a ball of fire or shoot a freeze ray. Each has their own uses but are also telegraphed enough that a good player can avoid them if they’re paying attention. 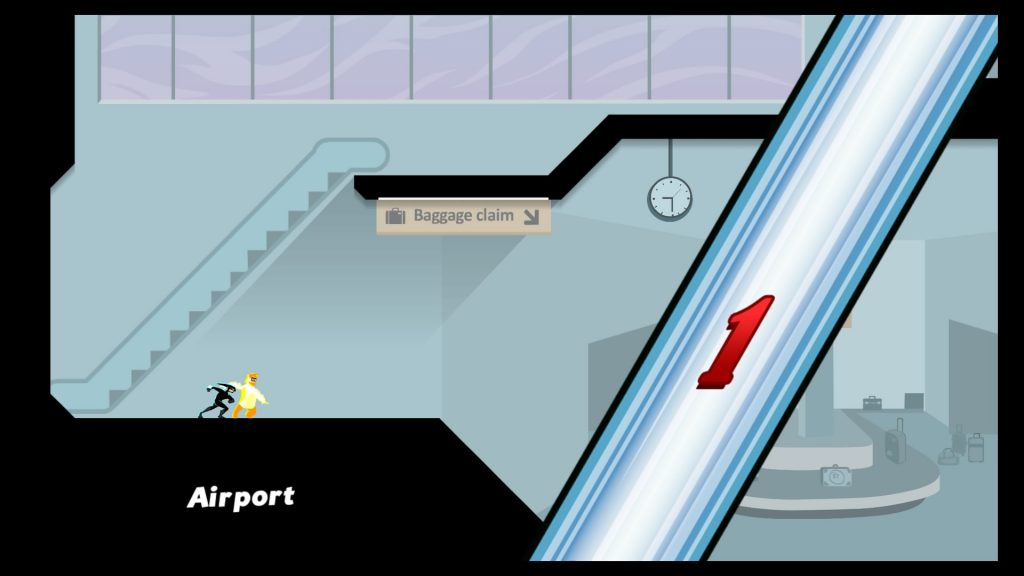 To stop games lasting forever the longer a match goes on the smaller the screen gets, meaning the distance required for a win becomes smaller. Playing on a tiny window in the middle of the screen can be pretty frantic but it’s pretty enthralling where the tiniest mistake or a brilliant bit of play can make all the difference.

You can play locally as it’s a single screen game but you also have online multiplayer and a ranked mode if you want to really test yourself. Ranked mode changes the rules slightly in that spikes which would be an inconvenience and slow you down normally now become fatal which can feel like an anti-climax as opposed to those races that go to the wire but it’ll be a mode primarily for the hardcore anyway. 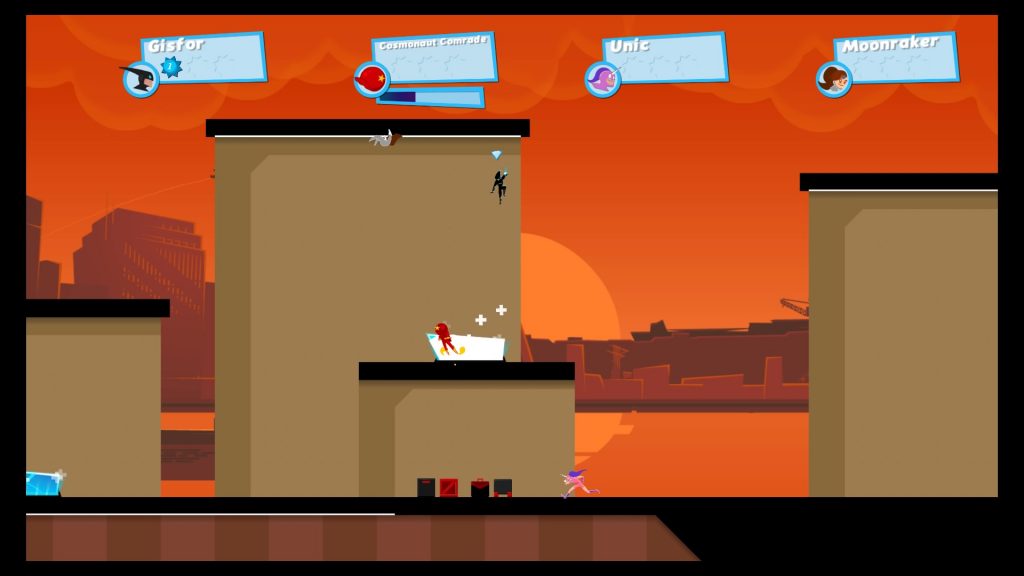 I’d argue that everything it aims to do Speedrunners achieves. Sometimes you can lose your characters in amongst each other but that’s just another obstacle for you to overcome. I’d primarily consider myself a single player gamer and maybe the content is lacking in that department but the focus is obviously multiplayer and that delivers an exciting, addictive and rewarding experience for a low price. As long as the online continues to thrive (I didn’t have any trouble finding games) or you have a group of friends nearby to challenge then this could be a firm favourite for a long time.

Speedrunners
9 Overall
Pros
+ Great controls
+ Nuanced gameplay
+ Addictive and exhilarating multiplayer
Cons
- Not a lot of single player content
- Can lose your character is the madness
- Large skill gaps may ruin the fun for some
Summary
If you're a fan of platformers that require skill and precision and want to test yourself against others then Speedrunners is the game for you, whether it's over the internet or on the same television. If you're strictly single player then you probably won't get much out of it however.

One thought on “Speedrunners – PS4 Review”