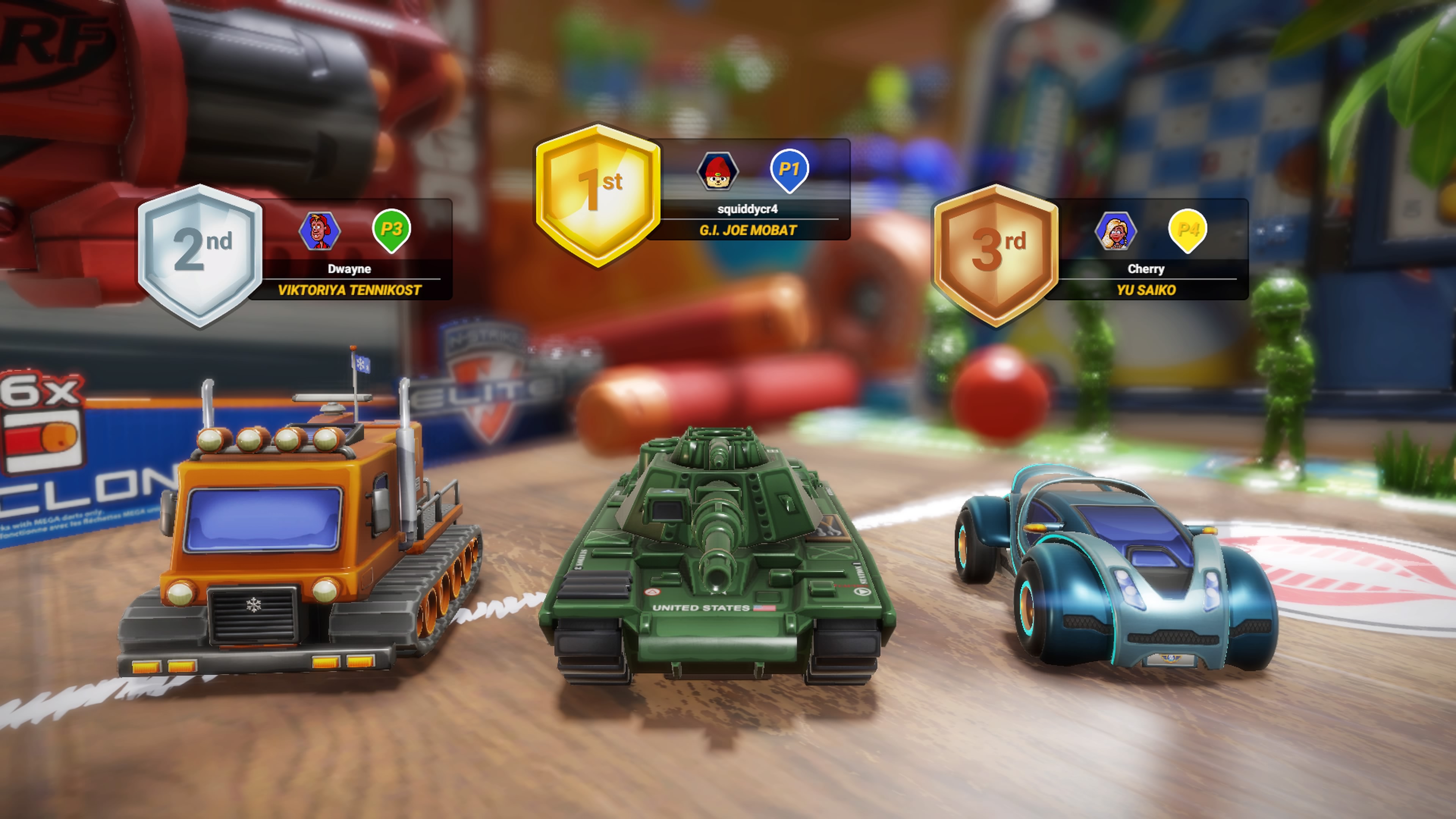 When it comes to top-down racing games, the original Micro Machines was, for the longest time, the standard to beat.  It took the slightly awkward format we knew from the likes of Super Sprint but made it special thanks to its clever track designs and brilliant multiplayer mode.  It still stands up as I found out when and friend and I had a few races last week on the SNES version.

The true joy of Micro Machines is that rather than putting you on an endless series of boring race tracks, the environments here are things like pool tables, a kid’s bedroom, a DIY workbench and other domestic locations.  The series has always captured the essence of a child’s imagination and World Series continues that theme. 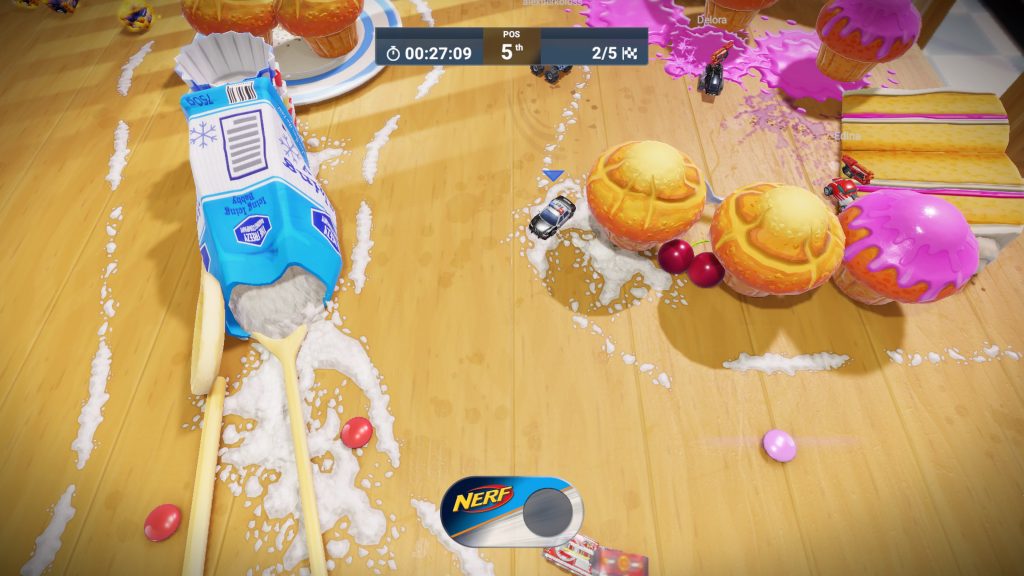 However, firing up the game initially feels a little stark.  The main mode is Quick Play which offers online matches against eleven randoms (with the AI filling in any gaps) and here you get Race (which are pretty standard affairs where the camera is just focused on you), Elimination (where the camera is focused on the race leader and if you fall far enough behind you get eliminated from the race) and Battle (which is a straight up arena deathmatch).

Skirmish allows up to four local players to also have races, battles and elimination matches.  However, here there are fewer tracks and weapon options than in the online multiplayer mode.   Ranked Match mode opens up when you get to level 10 (presumably to keep non-serious players out) and, finally, Special Events which are more races and battles but only available at set times. 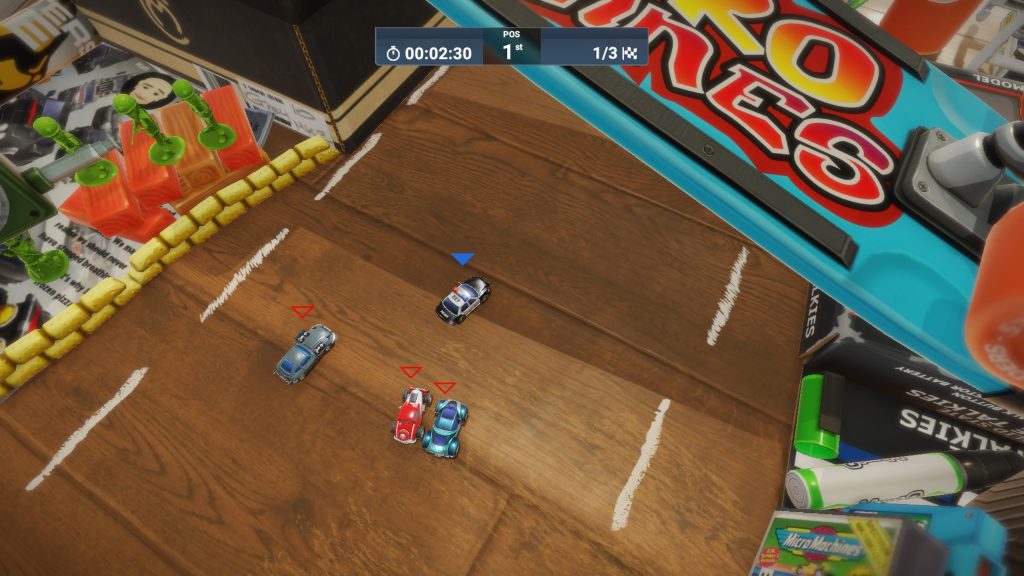 The focus here is very much about multiplayer, which is to be expected as racing against your mates was always what Micro Machines was about, but the overall package feels pretty thin without a career mode or even just the opportunity to play an offline championship.  Also, the focus seems to be more about the battle matches than the actual races, with the number of race tracks available seeming quite limited.

On the track the handling is a little bit too slippery for my tastes and does take some getting used to.  Online opponents vary (of course) but the AI tends to go pretty quickly which means that playing it safe isn’t really an option and so you’ll find yourself falling to your doom pretty often at first.  Once you get used to that, you also have weapons to contend with and, to be honest, I’m never a big fan of weapons in racing games.  You’ve seemingly got very little defence here against attacks and you can find yourself taking a defeat in a race you were doing well in quite easily.

Also, I always seem to suffer from online disconnects when I’m doing well, which presumably means there is no host migration.  The game does actually punish against quitters but hides that fact away so at the moment there’s no real incentive for people to play fair.  That said, the online play seems fast and solid.  Quick Play doesn’t offer the choice to host and pick tracks though so you do have to suffer through the tracks you hate (such as the garden with its frozen section). 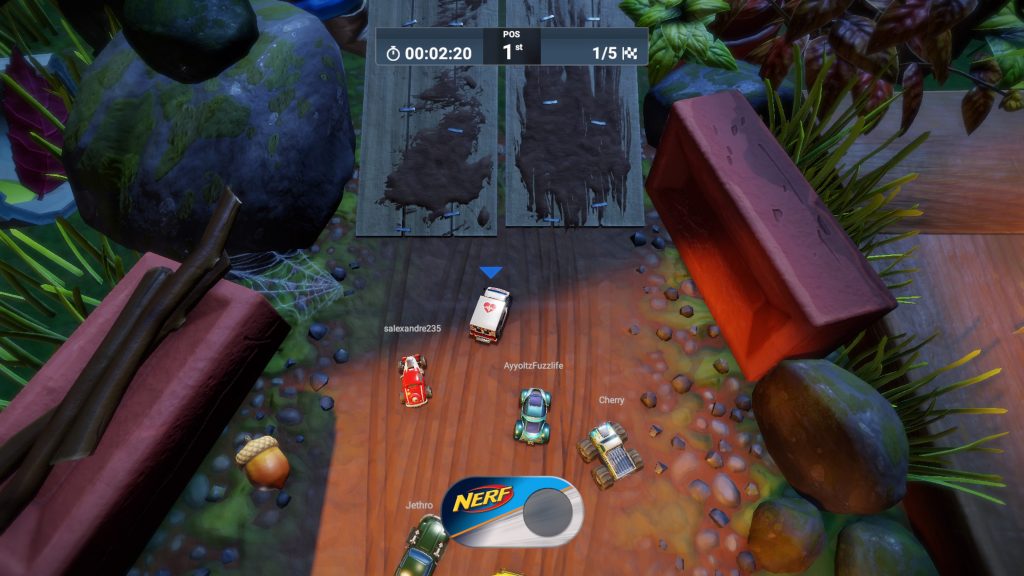 In a problem that has always been with the series, the camera is quite close to the action which means the track ahead is usually impossible to see.  The way around this is to learn the tracks but some tracks have random elements that can slow you down and not being able to see these means you have to slow down, something the AI never seems to do.  In fact, the AI in this game is a little bit too good at times and you can’t set their level which is a shame.

In the offline Skirmish mode you can turn off the power ups but online you can’t.  Which is an odd choice as World Series’ weapon selection for races isn’t all that great.  They can feel a little weak (which is no surprise as the game often feels like an advert for NERF) but, that said, the online capture the flag and bomb the base matches were probably the most fun I had with the game.  You do get that sense of chipping away at your opponents rather than blowing them away red turtle style but add in the objectives and it all becomes enjoyably chaotic.  It’s the mode I keep coming back to anyway.

No modern game would be complete without in-game currency and loot boxes and that’s all on offer here and isn’t too obnoxious.  Thankfully the items you buy are just cosmetic and don’t affect the gameplay.  If you were forced to race against people spending real money on better engines, then we’d be very unhappy.  The customisation stuff is relatively welcome though as there are only twelve vehicles to play as and you’ll want to stand out from your opponents. 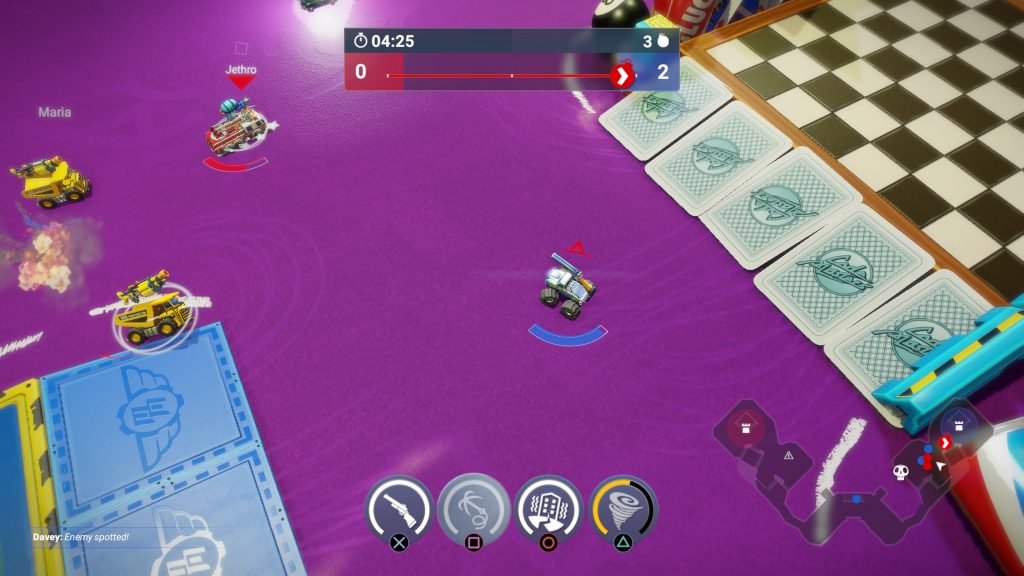 As a budget release, it shouldn’t be surprising to see that Micro Machines World Series is a fairly thin offering but last year’s Mantis Burn Racing offers better single player options, a decent upgrading system, hi-res visuals and much better handling for a fraction of the cost.  However, Micro Machines has the nostalgia and more interesting environments to race around in.  The smart money is on Mantis Burn Racing but if you are a former 16-bit gamer who can’t resist the urge to race around some familiar environments, this is probably no more bareboned than the original Micro Machine titles and still has enough fun and nostalgia to make World Series worthwhile.

Micro Machines World Series
6 Overall
Pros
+ Battle mode is fun
+ Good environments
+ Online play seems solid
Cons
- The racing isn't as much fun as hoped
- Weapons are bit weak
- Weapons ruin the racing a little
- No single player depth
- Online disconnects are annoying
- Generic music
Summary
Micro Machines World Tour does just enough to live up to the brand but not much else.