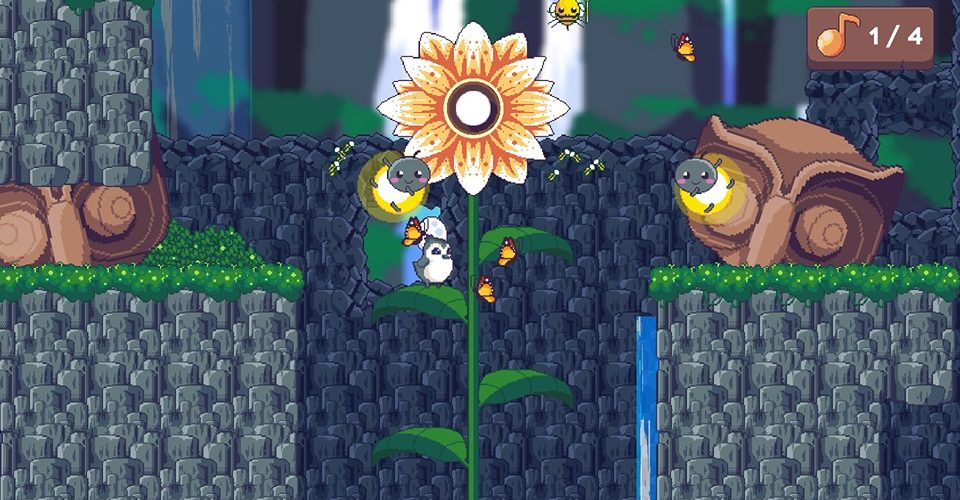 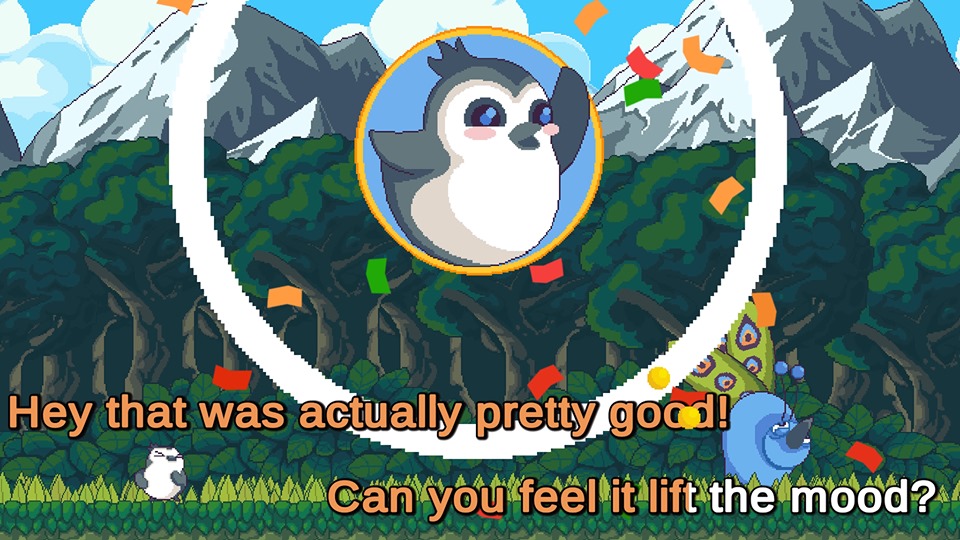 When I first saw Songbird Symphony being advertised on the PlayStation YouTube channel, I couldn’t help but be reminded of a section in the classic Mega Drive (Genesis for those who are wrong) game, Ristar. For those that managed to breach past the lava world, they were greeted with a level that was entirely composed out of musical elements. In this, you had to collect metronomes and pass them off to birds who would use the music to help Ristar progress through the stage. I’m not sure why this level in a near twenty-year-old game came to mind, however, I couldn’t help but feel a bit of fleeting nostalgia for it when Songbird Symphony first showed up.

Of course, Planet Sonata in Ristar was only one level, a gimmick that can be ignored once passed. As much as I loved it and remember it to this day, the fact it wasn’t replicated or expanded upon to a large degree could well be for a good reason. Nevertheless, the idea of a platformer in which you needed to use music to navigate is something that has stuck with me for some time and I am glad to say that Songbird Symphony scratches that itch perfectly. 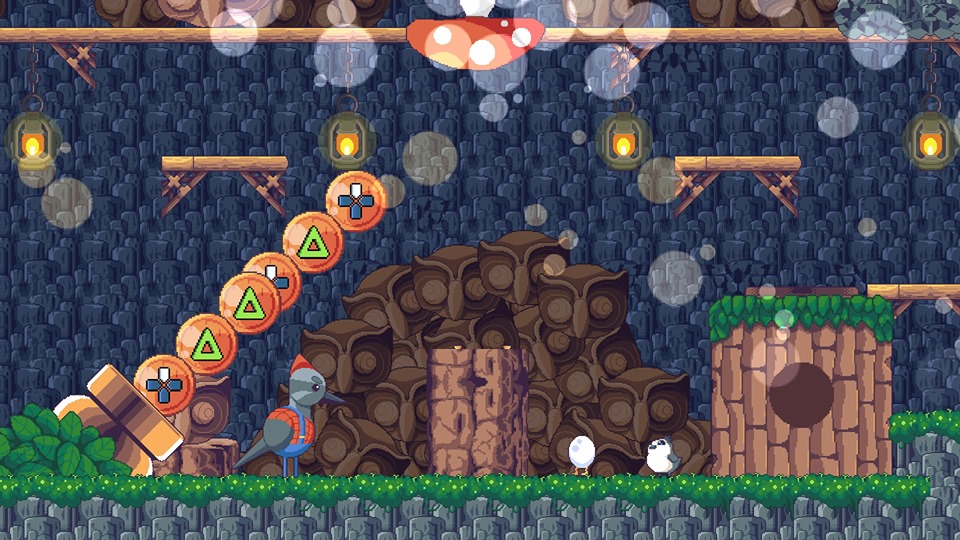 You play as a small bird who is aptly named Birb. After hatching from his egg, Birb finds himself being raised by Peacocks and living with the stigma of not being a Peacock himself. The game plays out as Birb leaves his nest and embarks on a journey to find his true parentage and find out which bird he really is. Throughout the journey, Birb encounters other species of bird who will help or hinder his progress. Much like every gaming hero, Birb has his own way of getting around and interacting with the world. This is done through song and hitting the D-Pad allows Birb to chirp and trill, singing along with the inhabitants of each area. Birb’s song is also able to manipulate the environment itself, by simply matching rhythm of the world around you, you can cause certain platforms to move and shift around to grant passage for hard to reach sections.

Music is so intrinsic to the Songbird Symphony experience, that the game is practically a musical. Various inhabitants of Birb’s world will greet, gatekeep or even attack Birb in the form of Simon-says style rhythm matching sections that do a lot to steal the show. These sections are by far, some of the most delightful moments of gameplay I have ever enjoyed. They play out like Parappa the Rapper, having an instructor or opponent conjure a verse about how their day is going, or how Birb is now doomed and then you must match button prompts in rhythm to keep afloat. 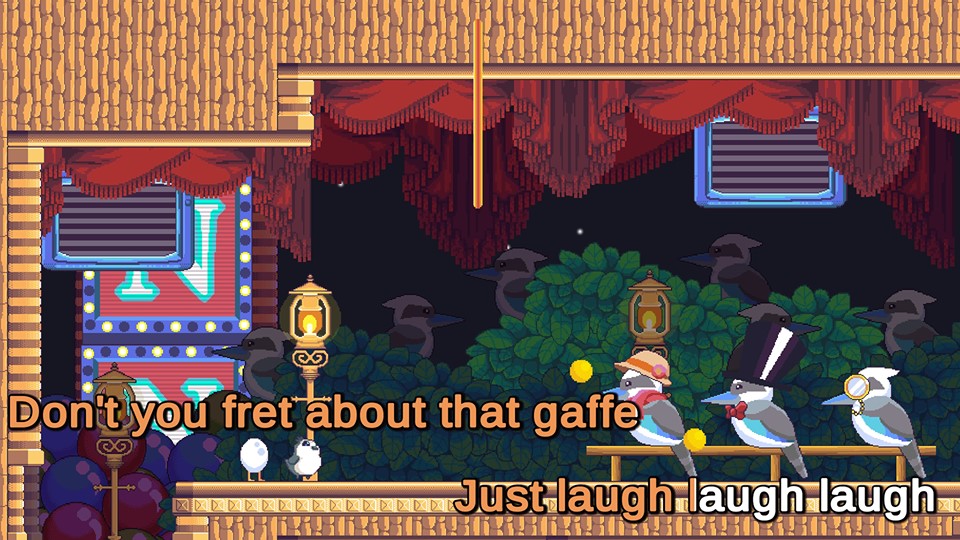 The motivation for these songs can range from Chickens introducing you to a secret dance, Kookaburra’s dealing with all problems by laughing them away or Magpie’s that are just out to impede your progress with in-your-face rap battling. It’s all rather twee, but in a good way as the game is packed with personality. Each bird or area you encounter is themed and there are plenty of side quests and collectables to keep you busy as you navigate through each section. Rather brilliantly, much like Planet Sonata in Ristar, as you complete smaller tasks, such as singing along with the chicken princess or finding a secret area, more of the background audio will become heard, contributing to the overall theme of the area.

There is a lot of exploration in Songbird Symphony, and to have that music fill the air as you progress, it gives you a real sense of progression and reward as the world slowly becomes more alive with your actions. For the first time in a long time, I spent the time in each area to make sure I picked up the hidden musical notes so I could hear the song play out, before moving onto the next to do it all over again. 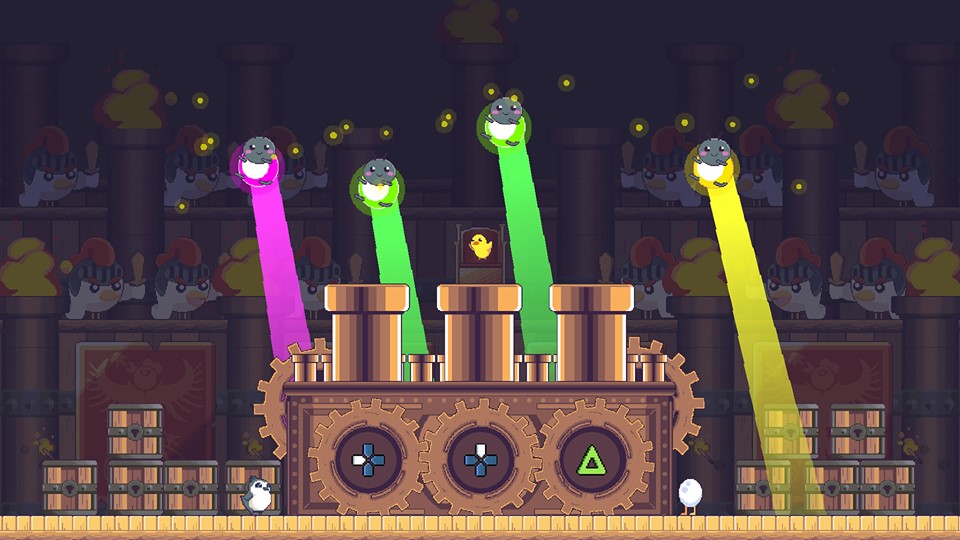 This personality is not confined to just the audio, to back it up is the incredibly cute pixel art that breathes life into the world. Songbird Symphony may have the tried and saturated look of a retro revival title; however, it makes up for it with great design and animation, particularly in the musical sections as the characters around you bounce, dance or fly around the screen to the music. It’s one of the few games I would gladly watch another play as well as play it myself due to this as when you are focussing on button presses in time with the music, it can be quite hard to see the craziness play out on screen. The initial dance number with your Peacock foster parent is a joy to behold, ramping up considerably in the short space of time that you have played up to that point, so going back to simply watch is as much fun as playing sometimes.

This sense of fun cannot be understated. Songbird Symphony doesn’t feature typical enemies or damaging obstacles. It is purely an adventure title with a musical element that is done brilliantly. While you cannot really be hurt, there is an underlying challenge and replay value bred into the concept of getting a perfect hit rate on songs, or simply being able to pay more attention to the cacophony of colour on screen. This small game has a lot to give and when you give it chance, you will find nothing short of a unique and heart-warming adventure which you can’t help but smile at. This game is the very definition of Cheep and Cheerful.

I’ll get my coat.

Songbird Symphony
9 Overall
Pros
+ Utterly joyous in every way
+ Solid rhythm action with a story
+ Doesn’t skimp on challenge for the sake of cute
+ Beautiful sprite work
Cons
- Perhaps a bit too simplistic for some
- This game made me use words that are banned on PlayStation Country. Words like “Delightful” and “heart-warming.” How very dare you, Joysteak.
Summary
Songbird Symphony is a sickeningly sweet platformer with tons of personality, fun and music. Joysteak Studios have done an amazing job of creating such a unique blend of platforming and rhythm action that will surely have players coming back for more after the credits roll.