It also has look and feel in common with Super Weekend Mode, sharing many graphical assets. Thankfully gameplay is different in this case as opposed to retreading the previous game.

Mochi is a type of squishy Japanese rice cake, your character being a stretchy glutinous blob of it. Mochi Mochi Boy is influenced in some part by Keita Takahashi’s Noby Noby Boy and less obviously Katamari Damacy. The latter in terms of collecting slimes, analogous to unlocking cousins through gameplay. The former in terms of name and the fact you’re also stretchy like Noby Noby, though a little less freeform in this case. 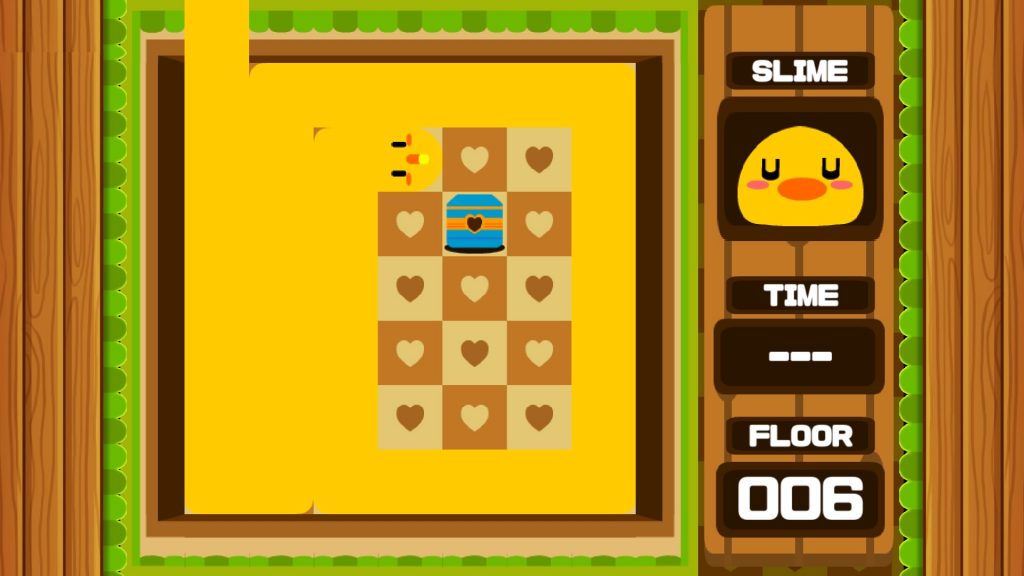 The default game mode is Tower where you climb the devil’s tower collecting slimes as you do so. This is the meat on Mochi Mochi Boy‘s bones, though there is also a challenge mode where you can complete up to ten randomly generated levels of increasing challenge.

You simply move using the d-pad or analogue stick, a quick tap of

being enough to restart a level if you back yourself into a corner. Alternatively you can tap

if you get fed up, that giving an immediate game fail state and game over screen. 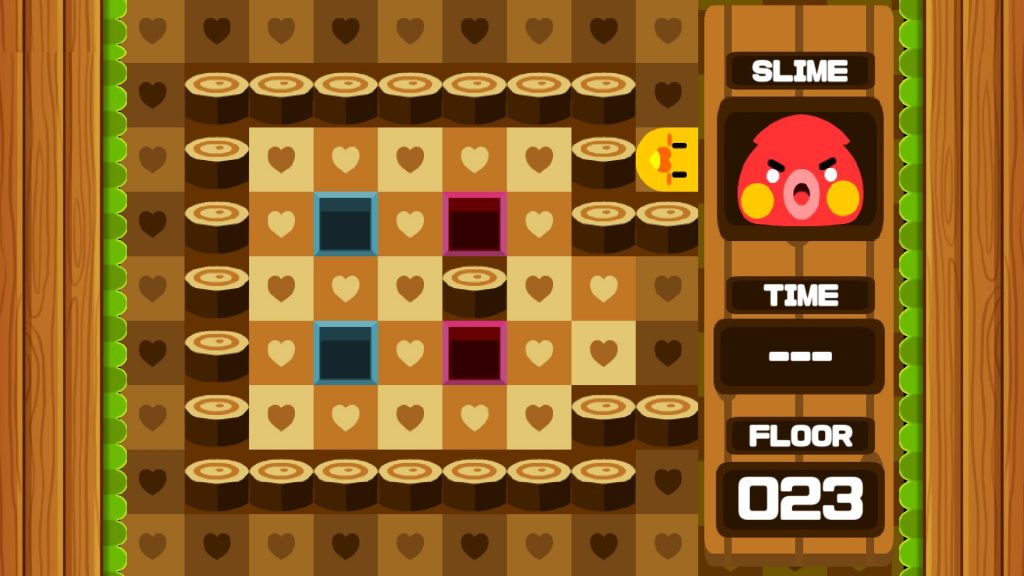 Each level is generally a seven by seven grid, occasionally a nine by nine. Your goal being to cover every square marked by a heart to complete a level. It’s all quite straightforward and intuitive. You’ll only come unstuck on a few occasions, though only on levels that get more complicated with warps and swapping from one side of the level to another.

Some later levels require a little lateral thinking to clear but generally you won’t struggle too much, even once you’ve popped the final trophy (probably reach level thirty). It’s worth carrying on as the gameplay is fun and well suited to short play sessions. 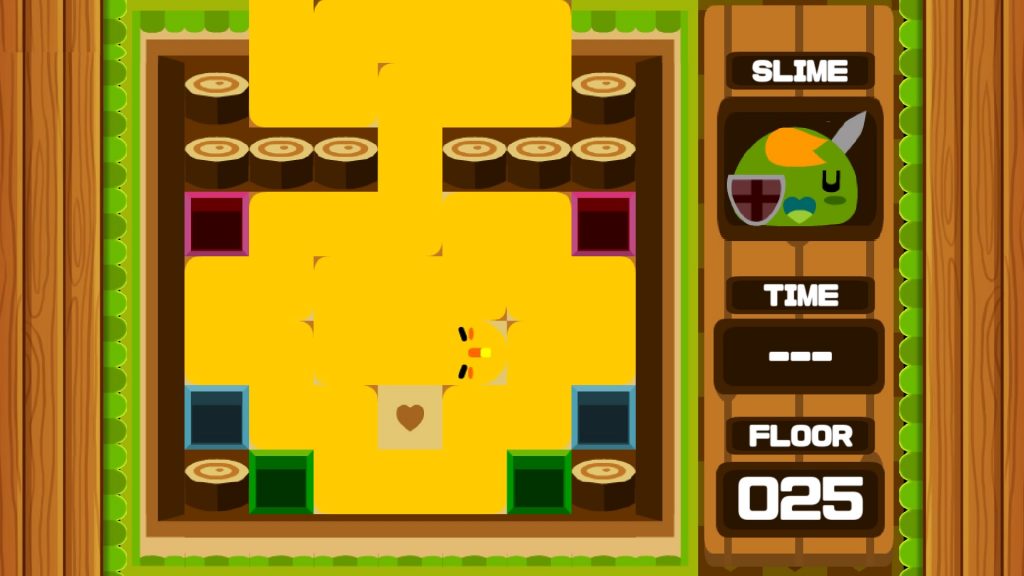 As is the norm for this publisher, Mochi Mochi Boy is available on PS Vita via crossbuy and barring a few load pauses is a good fit, if not moreso than on PS4.

In typical Ratalaika fashion, the trophies on Mochi Mochi Boy are straightforward, almost too easy in fact. On our Vita playthrough we started playing on our train ride home and literally a half hour elapsed between the first and last trophy unlock. We get that it’s Ratalaika’s thing, but a little more challenge or something linked into the collectibles would be nice. 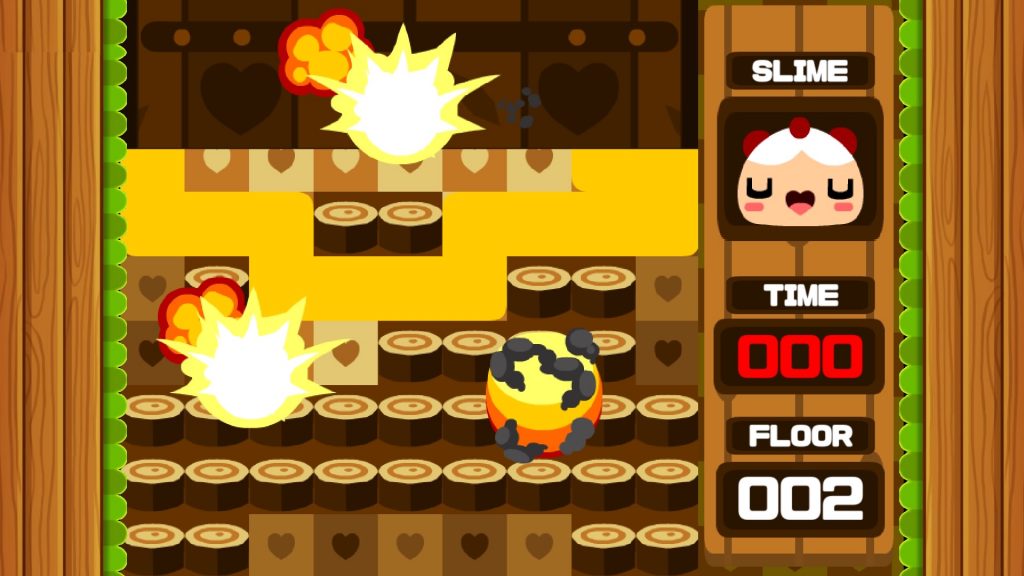 We noticed Pixel Teriyaki on Twitter bemoaning the fact many people wouldn’t have seen the latter stages of his previous release, the same applies with this too. If you bed down with the devil, that’s the price you pay we suppose. Thankfully, unlike his previous game, Mochi Mochi isn’t as reliant on fast reactions so we’d recommend you keep playing.

In conclusion, Mochi Mochi Boy is a great little puzzle game let down slightly by trophies that don’t encourage you to play beyond the first thirty levels.

Cons
-Weak trophy set
-Better fit on Vita than PS4
-Missed a trick by not focussing more on collectibles
Summary
Great little puzzle game with Vita crossbuy for a great value package. You'll be playing well after the last trophy has unlocked.