A year on from an original PC release, Fabraz’s devilish platformer finds its way to current consoles with this updated release. Splattering its inspiration very much on the walls, Slime-san looks to entice new players with a tight, infuriating gauntlet. 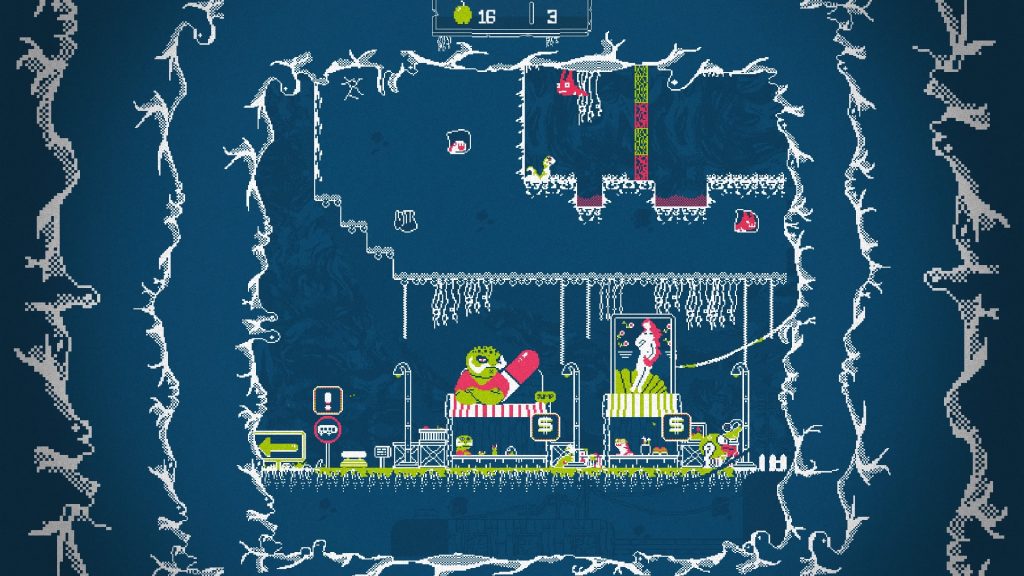 In essence, Slime-san is a challenging platformer in the vein of Super Meat Boy. Expect execution-heavy scrambles through some increasingly difficult levels. They are segmented into a handful of screens. Whilst it does help isolate obstacles into bitesized trials, it poses the potential to bog down the game’s fluency. You can move with haste but being held ransom by a single screen can feel like an unnecessary stumbling block. It happens with all these skill-based platformers but it seems to occur more often with the decision to give you levels piecemeal. To make it more frustrating, you can’t pick things up where you left off. Levels are meant to be tackled as a complete series of screens so, should you get three screens in and call it a day, you’ll be resuming at the beginning of the level.

You’re rated on time for the levels and gain trophies for quick completions. Naturally, memorisation plays a key part in this but Slime-san‘s movement options play well into swift gameplay. You have your standard jump which comes with some pretty generous air control. Your standard level of movement is slick and responsive enough for you to string complex sequences together. You have a dash which can be applied at ground level and whilst airborne and a button to slow down time. The latter factors into other mechanics and helps you phase through obstacles. 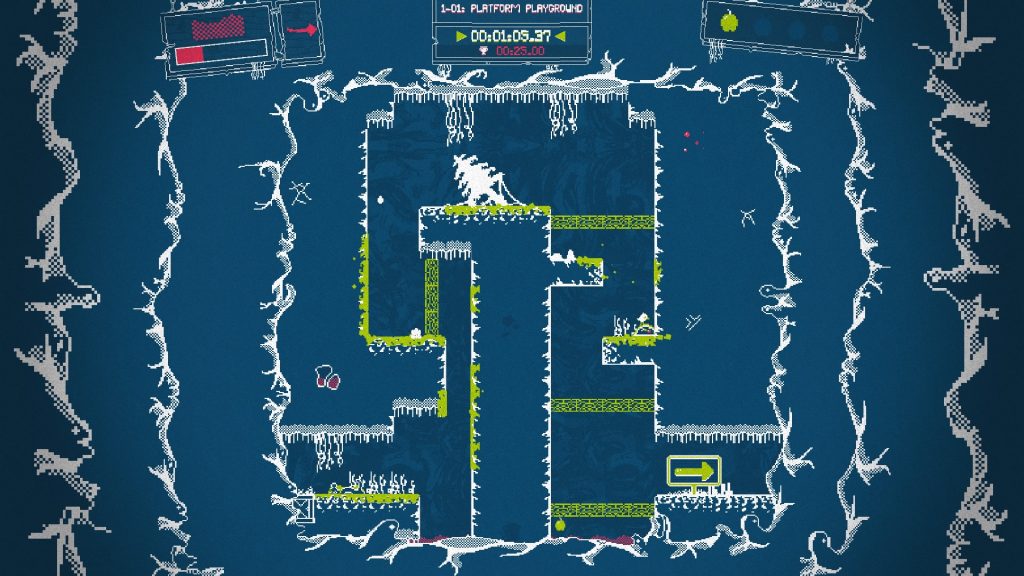 It’s a small frustration but it does make smaller progress feel a little more meaningful and encourages you to brutishly force your way through a full level. It also offers the developers the opportunity to spoon-feed mechanics and give levels their own thematic sense. You’ll find levels comprised around a single mechanic and, once a world has introduced all it has to offer, it combines them in a rather comprehensive way.

Combining your dashes and time control are key to quicker times and this is arguably where I think Slime-san separates itself from the obvious inspiration. There’s alternate exits which allow for some exploration, as well as execution. The sheer amount of mechanics that are thrown your way is something that’s taken me by surprise. It’s not overbearing with the worlds providing an excellent proving grounds for learning and then applying new knowledge. 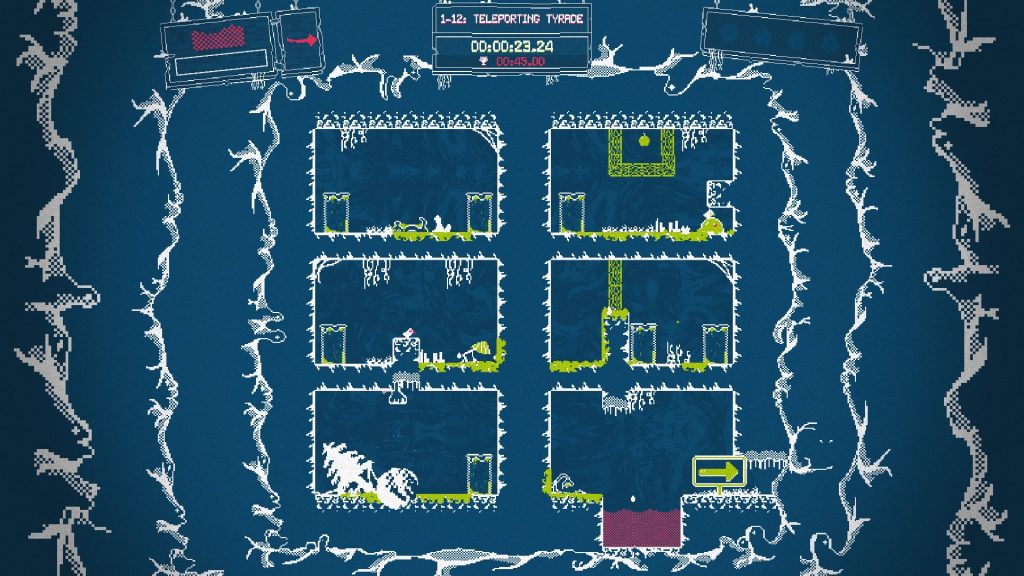 Collectible apples act as currency. This can be spent on different characters with their own set of intricacies. Backgrounds can also be bought which can alleviate some of the dull use of colour in Slime-san‘s world. Nothing seems too vital but purchasing new characters for the sake of mobility can make some challenges feel like a cakewalk. It’s worth noting this package also contains additional level packs which bolster the content substantially. There is a lot of ground to cover in Slime-san which might be a blessing or a curse, depending on how frayed your patience is.

Slime-san contains a very specific visual presentation. There’s a fair amount of detail in the 8-bit aesthetic with border art looking to almost replicate a game of a bygone age. Unfortunately, I don’t find it hugely appealing or inspiring. It doesn’t get too busy and is easy to follow but, for a game called Slime-san, there’s not a whole lot of Eastern flavour. You can see what might have been in some of the game’s hand drawn art. There’s not a lot to the game’s look that makes it stand out or shine. Death splatters and slime coat the level nicely and give your runs a sense of history but it still feels like it’s missing an identity.

There’s a ghastly blue and green palette to the visuals which doesn’t sit right with me. Some of it has a functional importance with green platforms being temporarily phased through. Red surfaces indicate danger and some green surfaces tamper with your movement. All in all, I just don’t find the use of colour that appealing. It’s ugly and harsh with all the stages taking part amidst a bland blue backdrop.  It reminds me of Amstrad CPC’s green monitors and yellow-on-blue command prompt.  It’s past I’m not particularly fond of. 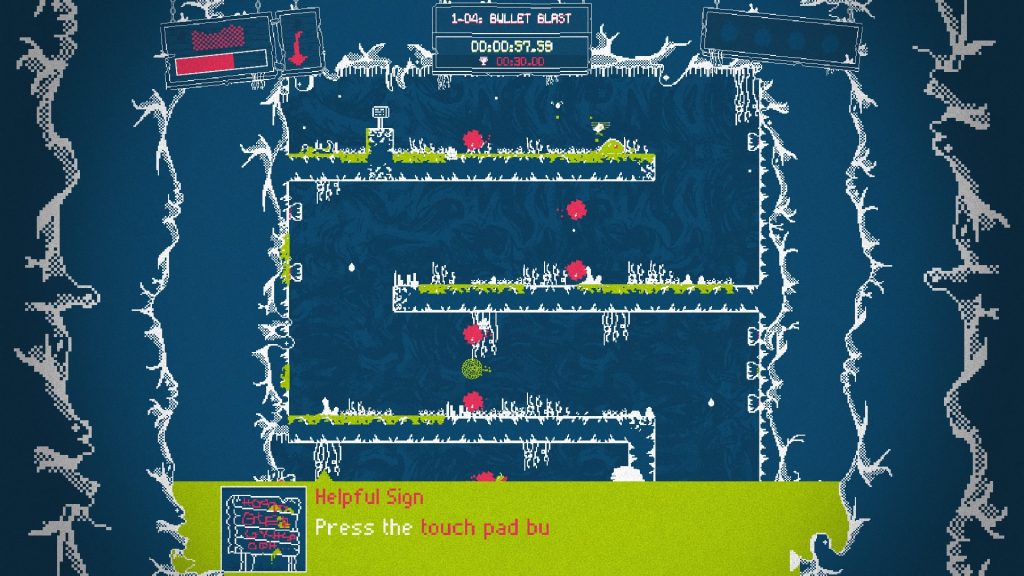 The soundtrack manages to remain quite catchy with a decent selection of chiptunes for each world. I found myself humming some bars long after playing and the score contains the right amount of urgency. It’s heightened when the timer demands it with the tempo quickening even further at the death.

It’s this lack of identity which stuffs Slime-san‘s momentum. It’s a tight, complex platformer with rewarding gameplay but the segmenting of the levels hampers the flow by some distance. I found myself putting the pad down more than I perhaps should have. It’s probably a game better dealt with in short doses but there’s a surprising amount to this which might overstay it’s welcome.

Slime-san
6 Overall
Pros
+ Tight, challenging platforming.
+ Mechanically dense.
+ Catchy soundtrack.
+ Consistent controls.
Cons
- Ugly, harsh aesthetic.
- Segmented levels can hamper the game's flow.
- Seems to lack some character and charm.
Summary
For those wanting an Everest to climb, Slime-san delivers plenty of challenge and complexity to master. It lacks some charm, character and the format of the levels seems to stifle any fluency. There's enough here to differentiate itself from the obvious influences but it hosts an aesthetic which I just don't find appealing.