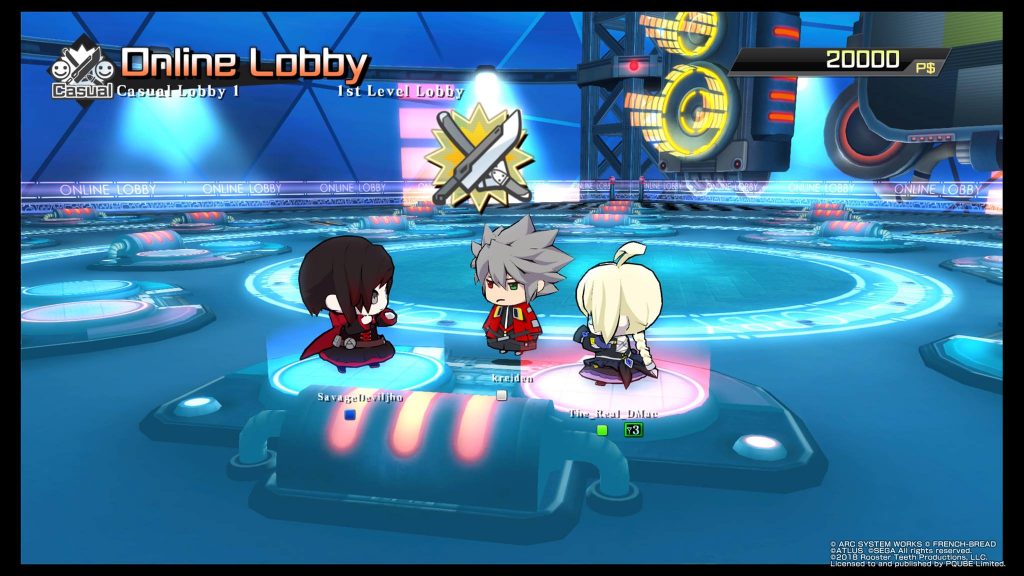 Blazblue has a pedigree. Starting life in 2008 as an alternative to Arc System Work’s previous Guilty Gear, it has been a series known for beautifully drawn sprites, frantic action and excellent character design. There is very little to dislike with this series as it has managed to stay at a consistent level for the past decade as a 1v1 fighting franchise. Ark System Works are at the top of their game also, with the recent Persona 4: Arena, Guilty Gear XRD Revelator and Dragonball Fighter Z being met with both critical and commercial success despite being launched within short time frames between.

Blazblue: Cross Tag Battle seeks to continue this legacy of quality. Instead this time Ark System Works has decided to embark bring us a crossover event which includes characters from Persona 4 Arena, Under Night In-Birth and Rooster Teeth’s RWBY. As opposed to the typical one-on-one fighting that is usually encountered in each of the franchises, instead we have a 2v2 format which will feel right at home to those who have played the early Marvel Vs Capcom games. This new fighting system comes with the ability to tag between characters during matches to manage health, while also allowing for flashier combos and assist moves that help keep enemies at bay. 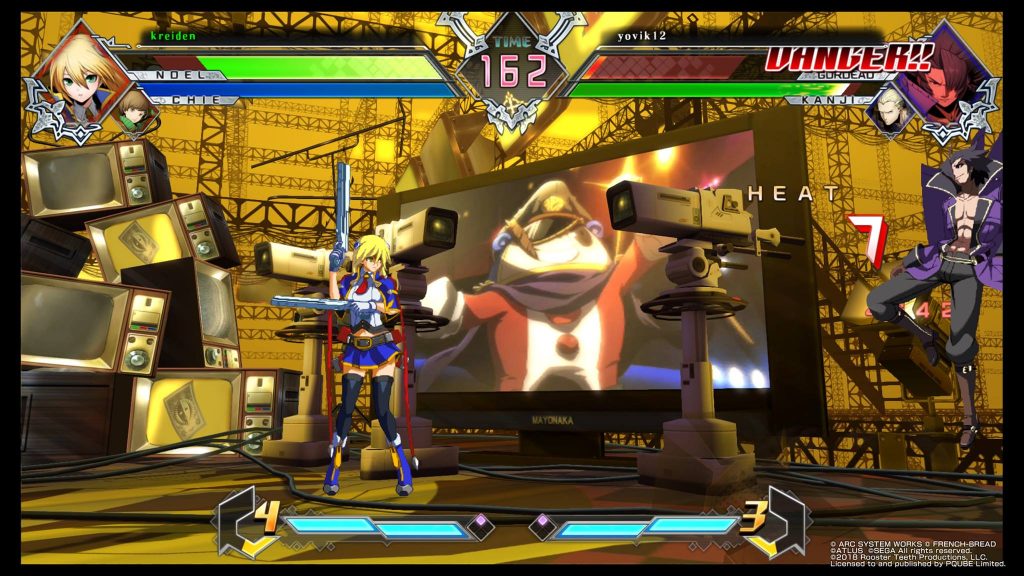 The fighting system in Blazblue: Cross Tag battle had to be subject to change thanks to the previously seen complexities of franchises like Under Night In-Birth and the concessions of the ‘VS’ type game is present here. The game has been simplified, featuring auto combo’s like Dragonball Fighter Z and special moves that can be triggered simply with a quarter circle stick motion and button press. This does a great job of making sure that each character can be picked up by anyone and helps reduce the stigma that anime fighting games are hard to approach. Arcsys are generally quite good at implementing these systems well and this accessibility can also be expanded upon to help add depth to the action.

Tag moves are commonplace and the key area in which players can hone their game. Picking the right partner character can make all the difference as each character has their own assist move which can be triggered with a press of the R1 button. These assists are a bit more powerful than most other tag mechanic games as you can call upon your partner at any time during your time in a fight (apart from when being combo’ed yourself of course.) with this in mind, you can throw out an assist during a super move to extend the combo, put pressure on your opponent’s when they guard and also when hitting the end of a combo string so that you can keep wailing on your opponent. A lot of the fun of Blazblue: Cross Tag Battle is testing out each character and partner to find that happy medium between a great playable character and one that can provide support from the sidelines. 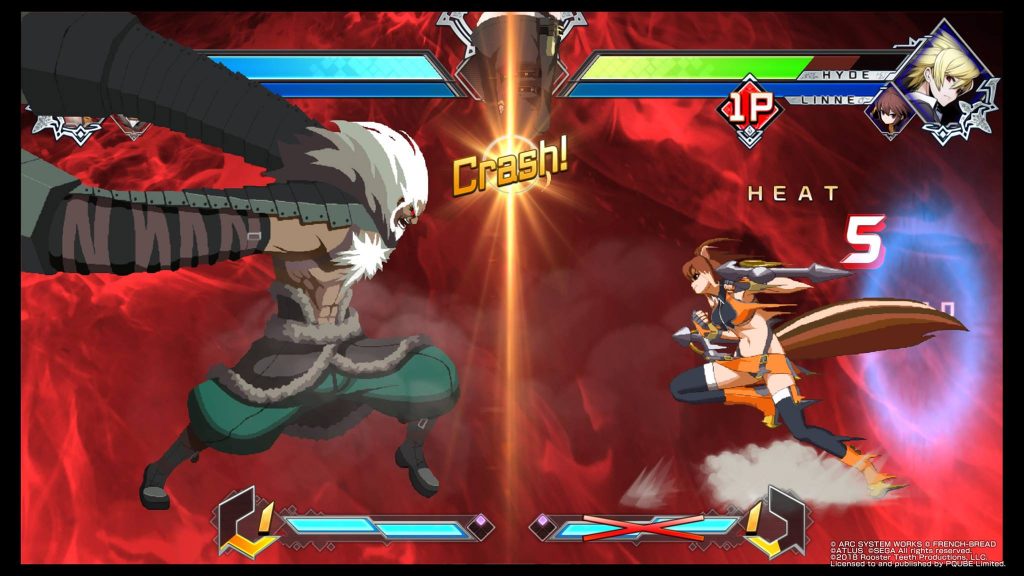 Unfortunately, the amount of characters to sift through at launch is quite slim. Blazblue: Cross Tag Battle features twenty in its initial roster and while this is fine to a degree for most fighters, for a cross over game that features reused/ repainted sprites and animations this starts to sting. For some reason, Arksys has elected to gate most of the characters behind paid/free DLC and it feels that this hurts the experience as when loading the character selection screen for the first time the layout suggests that there are massive chunks of the roster which are just simply not there. Further to this, Blazblue franchise characters make up half of the roster alone with ten slots filled.

Further betraying what is otherwise a content rich franchise, the game has fewer modes than fans would be used to. Offline is somewhat bleak with basic training modes, an unlock shop and Episode mode which acts as the core story mode for the game. The story is basic and follows a basic license crossing template which gives a basic reasoning as to why each franchise is meeting. The gist of this is that there is a Phantom field which has summoned characters of each world together In a tournament in which they have to fight over a keystone in order to get home. The twist being that this keystone has broken into four pieces and is held by one of each universe. It’s light on dramatics and plays out in the typical visual novel style between bouts. It’s serviceable, but unless you are deeply invested in the lore of each franchise this will likely just be something you would sit through for trophies. 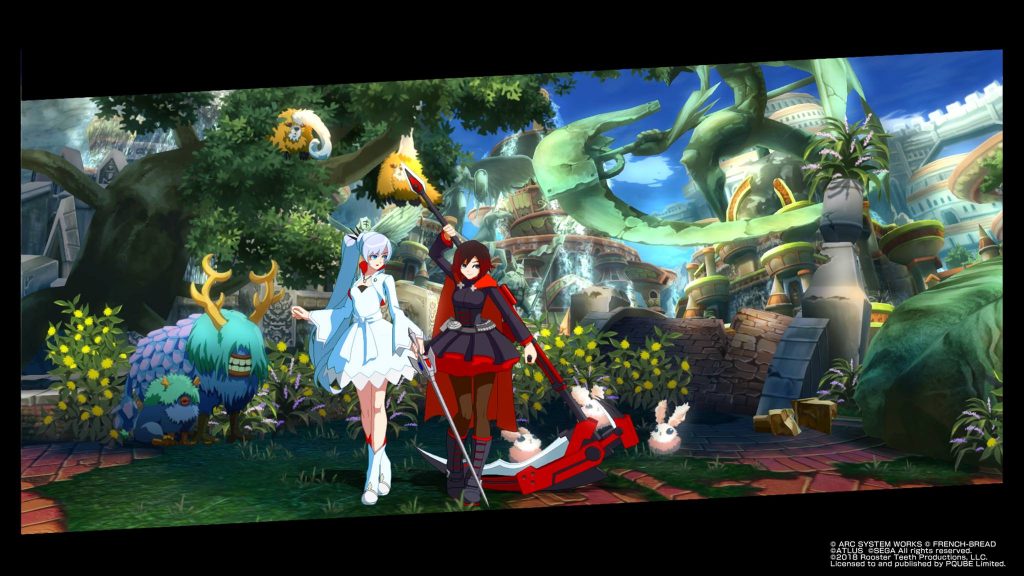 The real meat is in the online mode and this is where the game shines for the most part. There are several ways to play with others and one features a lobby system which is like the likes of Dragonball Fighter Z and Guilty Gear XRD. You can walk around a pseudo 3D lobby and engage in combat with others by standing near and talking with eachother. You can engage in this way for casual and ranked battles and there is an alternative mode in which you can spectate other fights while you wait for your turn. While playing online in the prerelease for Europe I did encounter some problems. The game is already fully released in the US/ Japan so there were plenty of combatants, however was rarely able to shake a poor connection status, likely because I was connecting from the UK. This resulted in most online fights freezing entirely as the connection between me and my opponent desynchronised. I have seen an improvement since the game has officially launched, however I feel that this was worth mentioning as this could be a potential problem for the game in general if you have a poor connection to work with.

Blazblue: Cross Tag Battle is fun yet flawed. Unfortunately, the lack of launch content and DLC locked characters affected my enjoyment of the game as compared to other Arcsys games it just feels anaemic. Fans of the respective franchises will find solace in the fact that the gameplay and character art live up to expectation however and there is certainly a good foundation here. This would certainly jump a few points if there were more modes announced later on, perhaps in the inevitable 2.0 version if it comes.

Blazblue: Cross Tag Battle
6 Overall
Pros
+ An accessible fighting system that does a great job of not alienating new players
+ Retains the style of Blazblue, very flashy during gameplay
+ Satisfying tag mechanics and character interactions
Cons
- Lacking in content, particularly with characters as most are locked behind DLC.
- Episode Mode feels like a relic compared to better fighting game story modes
- Some poor online moments thanks to random disconnects during battle (Possibly a pre-release issue)
Summary
Blazblue: Cross Tag Battle is a fun yet ultimately flawed fighting game. It manages to make more complex anime fighters into something more accessible, However the DLC-locked character roster and story mode sour the overall experience.