Save the Ninja Clan is a low priced release on the Vita and PS4 (but not cross buy). It promises a less sadistic Super Meat Boy style platformer and a couple of ways to approach the game. That’s a high bar to aim for but how close does it get? 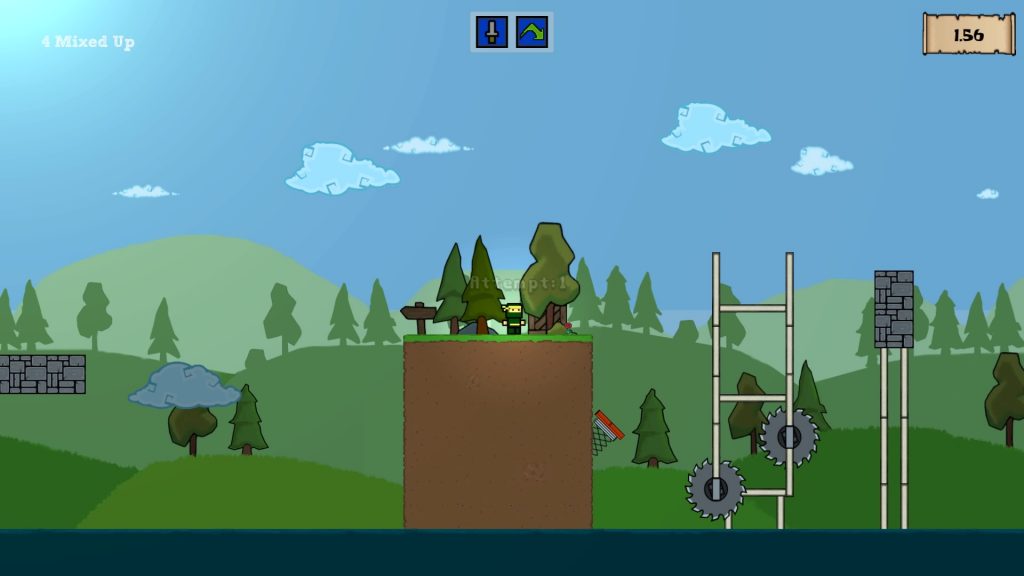 You play as a ninja who must save other ninjas from the evil White Ninja. There, story done. There are three worlds, each with ten levels and a boss at the end to complete. You do so by platforming, avoiding obstacles and defeating enemies who get in your way. Your basic controls allow you to move, jump and throw a shuriken, but depending on the ninja you’re controlling you also have a special ability. The Green Ninja can double jump, the Purple Ninja can sprint and the Grey Ninja can do a dash with invincibility frames.

Each world concentrates on one but pick ups will allow you to change to others as and when needed. Learning the, quite short, levels and completing them efficiently will get you a grade up to A+ if you’re fast enough. These don’t block your progress however and are just something for you to aim for. Dying lets you start from the beginning again with a reasonably quick restart. Also within each level is a collectible which is usually pretty easy to see and not too far off the beaten track, but it just gives you something else to think about.

As you progress through the levels and worlds more complex obstacles appear, from springs, saw blades and spikes to lasers, portals and rocket launchers. It’s not an unusual curve but it would be remiss of me not to point out that it’s been done right. The ability to wall jump off everything except wood, requiring you to throw your shuriken into it to create a platform, took some getting used to but you will. 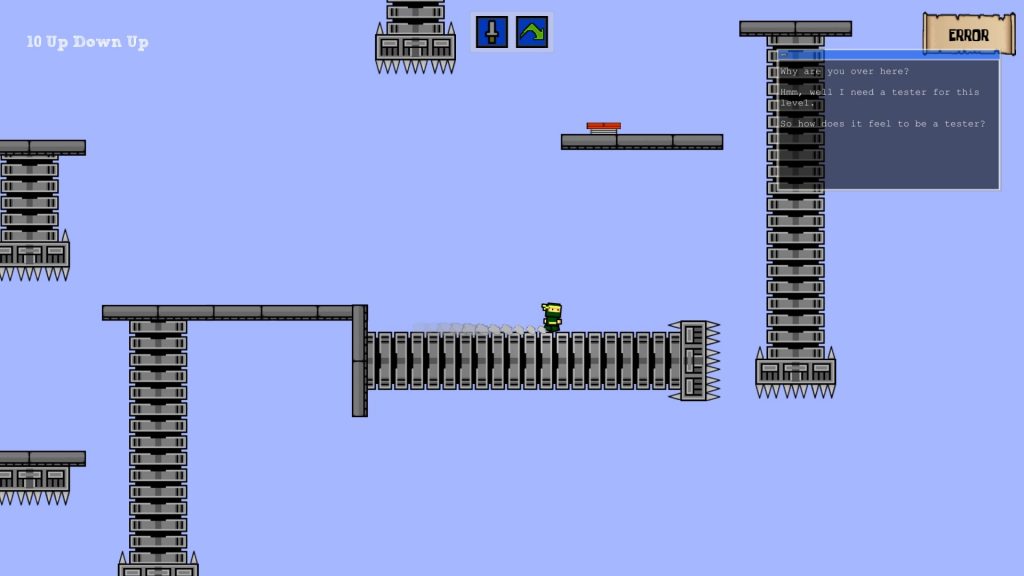 If you play through as intended then you’ll probably be done in a matter of hours, even with multiple retries on levels. Do that and it’s a fun little platformer, a little short but the price reflects that. There’s a little more to it than that however. Each non-boss level has a bug or glitch to find that can lead to a gag, more difficult obstacles or even a new level. Represented by a flashing graphic, if you come into contact with these then a text box will appear in the top right and the ‘Game Manager’ will start talking to you, asking why you’re doing what you’re doing and trying to kill you to teach you a lesson about breaking his game.

These sections add a lot of personality to what would have been a rather bland experience otherwise. The Game Manager will play tricks on you, send unexpected traps your way, he’ll plead with you not to continue before eventually just letting you progress to the next level, victorious. Finding all of these was a lot of fun and the trophy list encourages you to keep an eye out as you bounce around, or as you see the replay after you’ve finished a level (I told you it was like Super Meat Boy).

For a cheaper title you would expect some drawbacks and there are some, though none are game ruining. You can only use the analogue stick which for a 2D platformer is bizarre, this also includes in the menus which again feels alien, the dpad is unused. The controls in general aren’t as tight as the title it apes so closely, but you can absolutely adapt quickly, they aren’t bad by any means. Presentation in general is obviously low budget, with graphics that look stock and music, well, besides some decent boss tracks I rarely noticed any music though I know it was there. 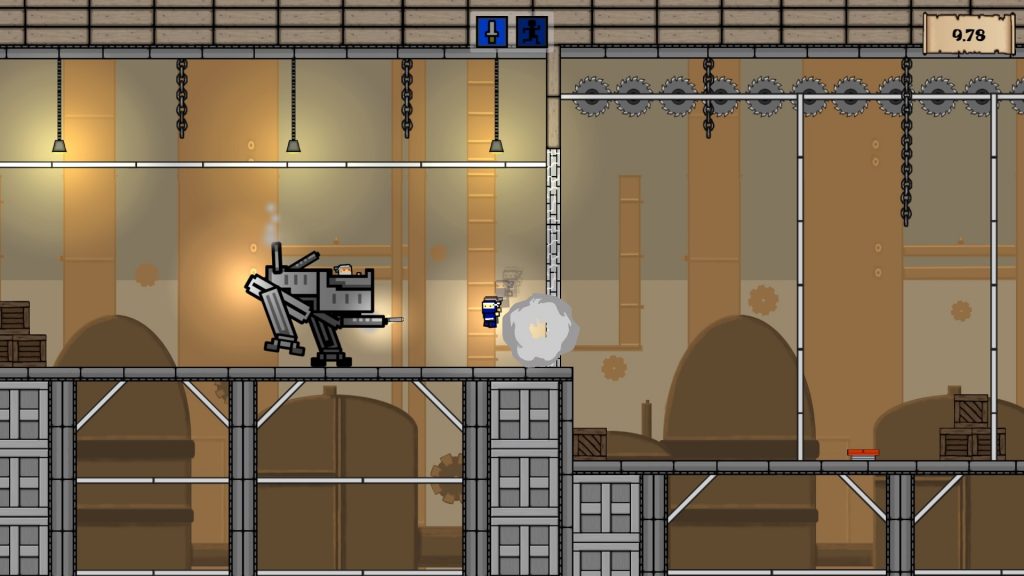 Also a presentation problem is the tutorial and game explanation. Thankfully it’s quite a simple game but the tutorial boxes explaining the mechanics and each ninja would just pop up and vanish at set locations which seemed a little pin point. A slower introduction would have made things clearer. Similarly the only reason I knew you could upgrade your shuriken was because of a trophy, the upgrade section (the collectibles are the currency) is in the world map which when you go straight from level to level you rarely see.

I also encountered what I assume to be a bug. From the off I could change which ninja I was controlling with the triangle button, cycling through them. When you complete the ‘True’ ending you’re supposed to unlock this ability which in many ways makes the game easier, but also a bit more confusing to start with. 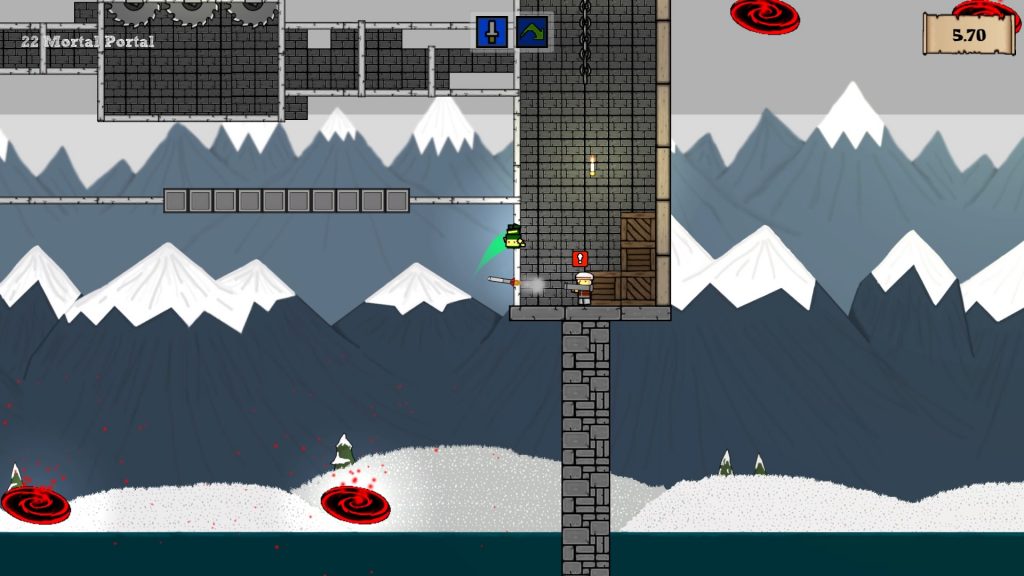 Still, these problems didn’t hamper my enjoyment too much at all. It doesn’t quite reach the heights of Super Meat Boy but thanks to the Game Manager and the intentional bugs and glitches Save the Ninja Clan has a unique feel which differentiates it from a simple clone. It’s quite short but the price reflects that so if you’re in the market for a a tricky, but not too tricky, 2D platformer with a personality of its own then I have no problem recommending this.

Save the Ninja Clan
7 Overall
Pros
+ Competent tricky 2D platformer
+ Unique personality thanks to the intentional glitches
+ A good amount of content for the price
Cons
- Presentation in general is low budget
- Not quite up to the standards of its peers
Summary
Save the Ninja Clan may appear to be a Super Meat Boy clone but it offers a personality of its own through the intentional bugs and glitches that add an extra quirk to the already competent 2D platforming.