Aping on the 8-bit aesthetic can feel old hat now but, expanded out to the third dimension, voxels still hold a cheeky appeal. Cococucumber are hoping Riverbond can hit similar nerves with a dungeon-crawling hack and slash looking to charm its way into Playstation 4 owners’ libraries. 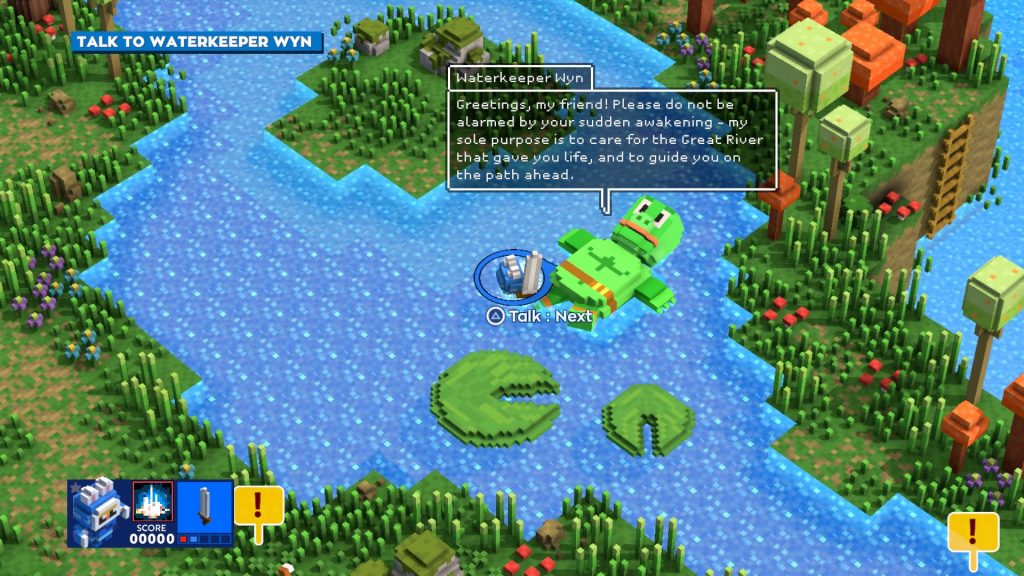 The voxel art style is colourful and fun. Enemies and friendly characters have a charming way about them and the environments carry a fair amount of detail. There’s variety with each local offering a different motif and enemy configurations. Cococumber have made an effort to make each zone feel different and, as you progress, new mechanics creep in. The soundtrack mostly keeps things light and cheery, although latter zones do imply a darker tone.

The writing is kept very light with static NPCs sitting around to quip or give you objectives. Some of these characters become objectives in their own right. They’re nice enough to chat to and they do provide some context for your missions.

If I have any qualms about the look, it’s that the isometric choice of camera can sometimes obscure enemies. It leads to the odd ambush and objectives potentially being hard to spot. Whilst these environments aren’t large, a map would’ve been helpful to point out remaining points of interest. A lot of physics-based items clutter the world which can also obstruct your path. It doesn’t take much to bash them out the way but, if enemies converge on an objective, you might find your shots blocked. 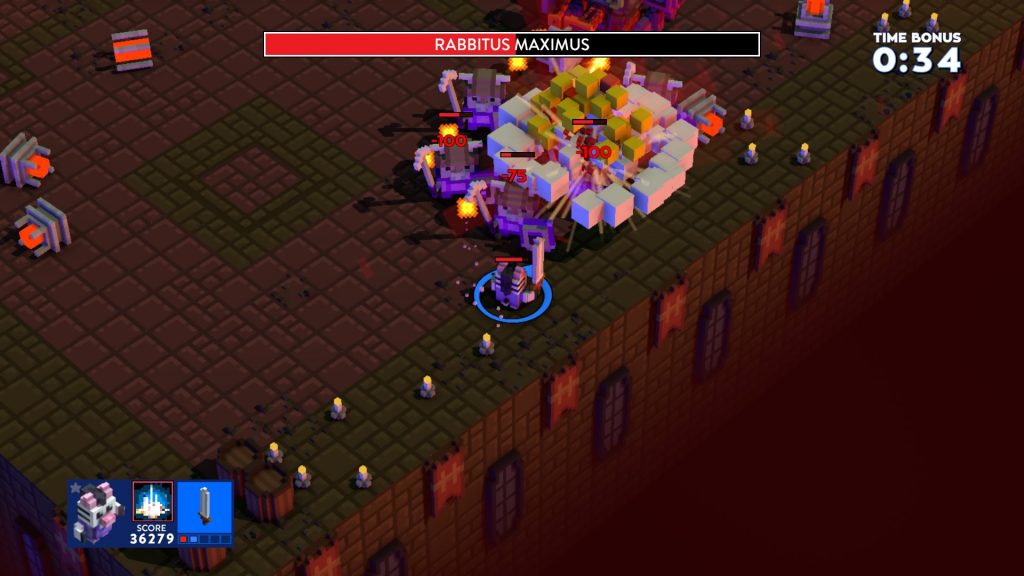 Combat is easy to grasp. You enter each area with a melee and projectile weapon and can pick up further armaments as you progress. You can hold five in total and they all offer different qualities of range and power. You can settle on favourites quite quickly but each zone seems to provide new hardware for you to experiment with. Projectile weapons have infinite ammo but they do require reloading. This period can make you feel a little exposed but the range these weapons give you allow for considerable breathing space.

The same variation can be said for the game’s enemies. The desert area throws spiders and scorpions at you which have predictable attacks. There are large, heavy hitters that lumber in their attacks. Whilst I found myself coming across similar archetypes, it was impressive to see some tailor-made adversaries across the eight worlds. You can roll out of trouble and line them up for easy kills and, whilst they can overwhelm you with numbers, you’re never defenceless. 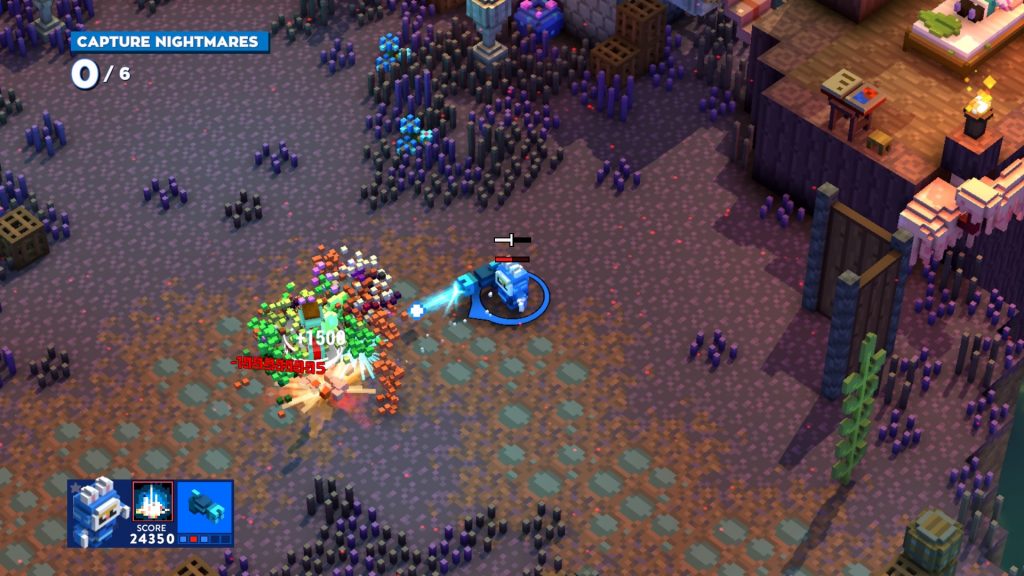 Unfortunately, Riverbond‘s structure doesn’t allow for much challenge. Combat does improve when there’s multiple enemy types but you find yourself settling on a weapon and mowing through them. Even if they do have enough firepower to trouble you, death carries no consequence. You respawn with no penalty and can just press on until the boss is defeated. Enemies maintain the damage you’ve dealt them so you can persevere.

These fights tend to go the same way, too. You have one gigantic foe accompanied by several minions. You can focus on the big guy or whittle away the smaller ones but, ultimately, it doesn’t matter much. The final boss does introduce another mechanic into the mix but that can feel like an artificial way to pad out the conclusive encounter.

Each area involves a handful of missions which will usually take you half an hour to run through. Some of these involve collection, destroying a certain number of enemies or triggering certain points of interest. Objectives are kept simple but it does start to feel stale towards the end. Riverbond is essentially a game about score. You rack this up by collecting coins, defeating enemies and collecting stars and gems. At first, it can feel compulsive as you mindlessly grab what you can. Defeating larger enemies can satisfy as they burst into a hail of voxels. Sadly, there’s no real end to the means. It can all begin to feel a touch hollow. 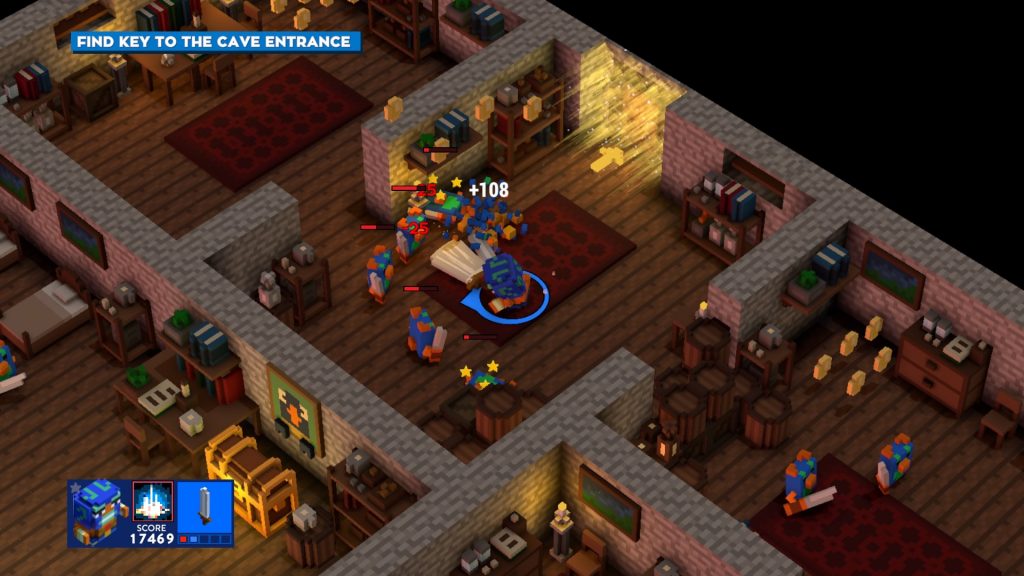 Couch co-op is available and, whilst missions do have a good flow to them, you can speed things up further with friends. Dividing objectives between yourselves can help cover a lot of ground and improve your effectiveness in boss fights. There’s no real chance for dissent with only score being the competitive factor. Working together can provide a quick blast but it seems short-lived.

That’s ultimately Riverbond‘s largest issue. It’s simple, fun and then it’s over. Combat doesn’t offer much complexity, missions are simply constructed and there’s little reason to return. Even the trophy support doesn’t offer much to keep your foot in. After finishing my first playthrough, I had most of them. With a group of friends, that might change but I feel like that might wear itself out just as quickly. There is stuff to find and experiment with but too much of it feels forgettable. It shows a lot of visual charm but, under the surface, it’s a little too basic.

Riverbond
6 Overall
Pros
+ Has a bright, cheery aesthetic.
+ Environments are detailed and have a lot of variation.
+ Plenty of enemy types to encounter, even if they follow the same archetypes.
+ Paced well for short bursts of play.
Cons
- Not much reason to replay old areas.
- Writing and story is a little forgettable.
- Combat is very simple with little threat or challenge.
- Objectives don't offer you much new to do.
Summary
At its best, Riverbond is a simple, charming dungeon crawler with good pacing. Unfortunately, the experience is short-lived with the simplistic combat lacking any real depth or challenge. Whilst there's variety in the locales, it doesn't extend to mission structure or encounters. It can be fun to thrash through an area with friends but there's little reason to return to something that feels so disposable.