As if the title didn’t give it away, Lapis X Labyrinth is a Japanese title and comes to us from Nippon Ichi Software who are regular purveyors of JRPGs and adventure games.  This one is a little different to the usual though as while it does the usual looting thing that you’d expect, it comes with a fresh graphical style and is an action-packed hack and slasher.

Despite being an adventure game, the story is pretty light.  There’s a labyrinth below the Golden Forest which has attracted adventurers throughout the ages.  The only problem is that currently the maze has an undefeated record and so the village that was set up outside it has seen busier times.  Thankfully for them a new crew of adventurers have arrived, ready to test their skills against the monstrous denizens that lurk beneath.  This is a Japanese game though and so these adventurers all look like children, but they know how to wield their weapons.

The core gameplay is 2D hack and slash platforming.  After a brief tutorial, you get to select your team of four adventurers and head into the labyrinth.   You get to pick for character classes from a selection of ten or so.  There’s not much in the way of information to guide your decisions though, so we used our best judgement, assembled our team and headed off into the game to make our fortune.  The characters you pick move as one in a ‘Dango’ formation, which is to say they are stacked on top of each other and you control the leader but can change who leader is with a quick press of the 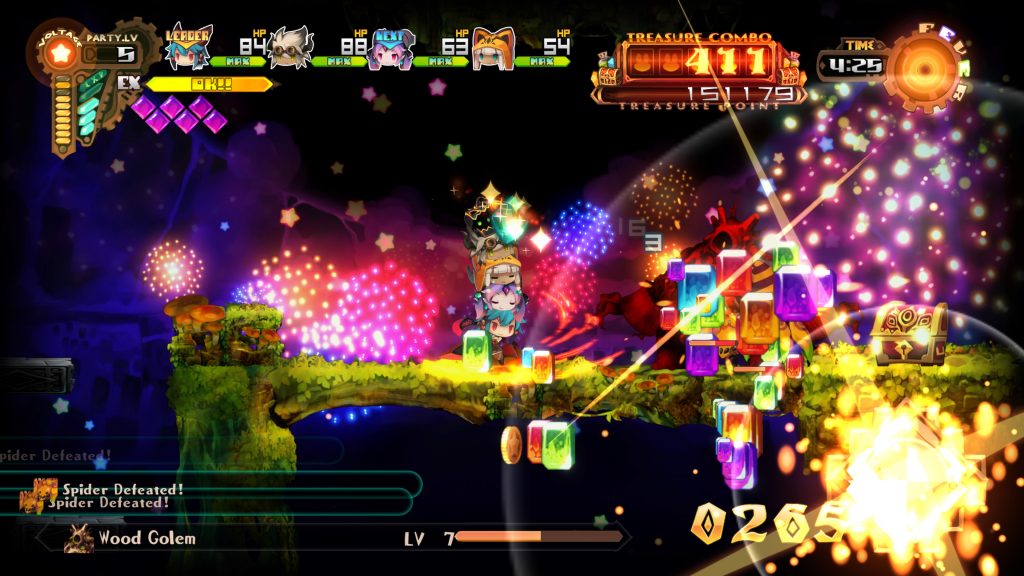 From there you get to jump around or hack away with whatever weapon is attached to your leader’s particular class.  These can be swords, daggers, wands, axes and the like and you can combo up five hits but we have to admit that we just mashed the

button most of the time.  There are special attacks mapped to

, and these have a meter that acts as a cooldown to stop you spamming them.  That leaves

as the jump button which is slightly annoying and there’s no option to redefine your controls but we got used to it eventually.

.  This allows your team to all attack together and generally works incredibly well when you’re ambushed.  Something that happens often.  However, as your party members are killed off, this attack becomes less useful.  So you need to keep an eye on all four characters’ health. 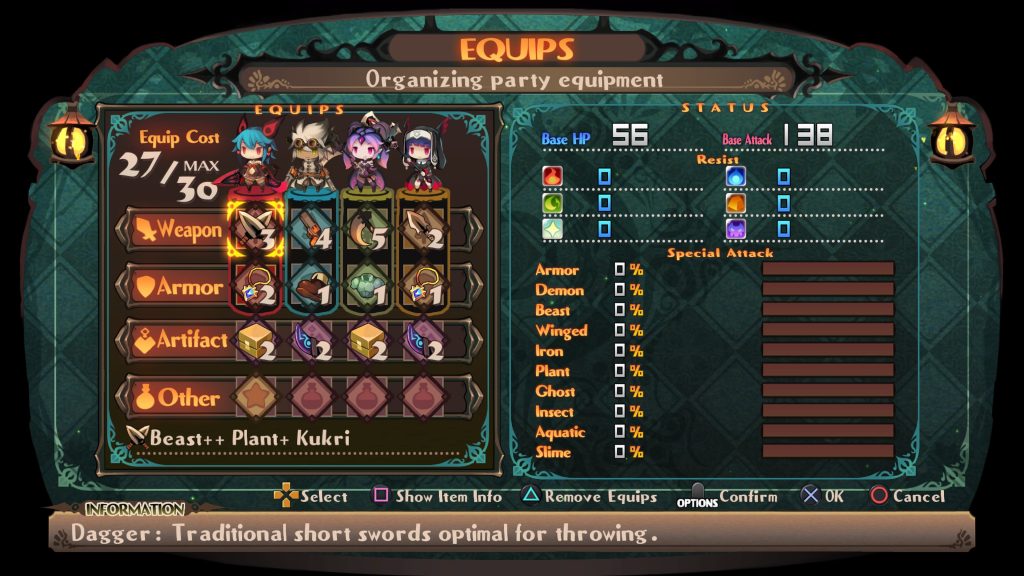 The combat itself is hectic and satisfying.  You are dishing out death in such a way that is at odds with the cutesy anime styled sprites that you control.  In a way its kind of similar to the classic coin-op Rodland and between that and the rudimentary platforming, you can almost treat this as an arcade game at times with short five minute levels eventually leading to tough boss encounters.  Indeed, to emphasise the arcade feel of the game, when you run out of time a giant spectre starts to hunt around the level for you which is reminiscent of several old platformers, most notably Bubble Bobble.

However, there are some fairly deep looting and RPG mechanics in there.  Thankfully the game waits a while between introducing you to each one which is good because at first it can be a little overwhelming.   You’ve got tonnes of weapons, enchantments, crafting items and whatever else to think about but it does all start to make sense (even if we did scamper off to Google with the phrase “best lapis x labyrinth build” ready to go).  There’s maybe just a tad too much of that stuff and the looting tends to follow the general flow of the game’s levels which means that as long as your are pushing forward, you never really feel like you’ve “levelled up.” 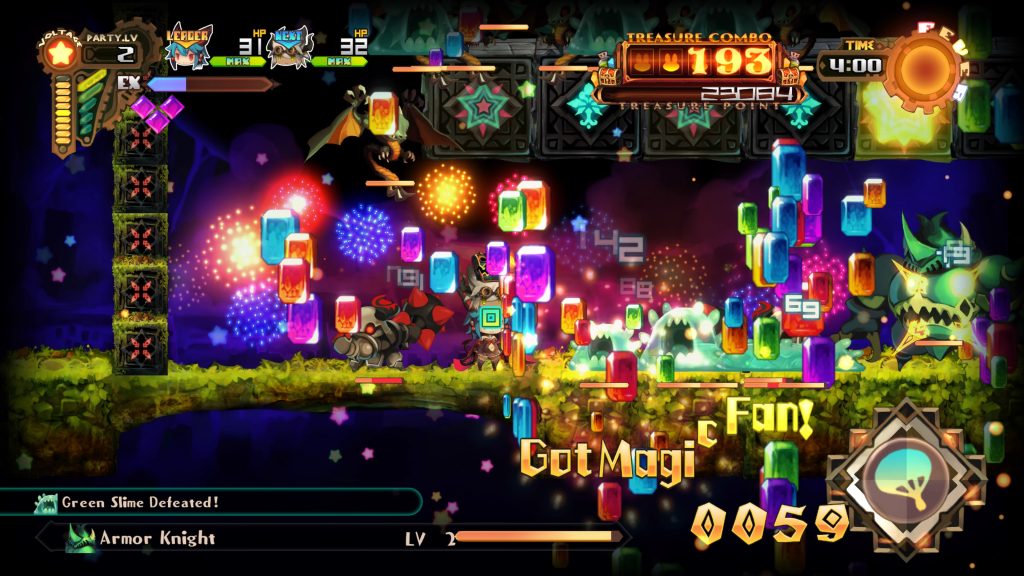 That said, the gameplay is addictive as anything with the strength of the combat more than balancing out the weaker RPG elements.  It’s not as straight forward as something like Rogue Legacy  but it isn’t too complicated either and you’ll be having fun with the game pretty quickly once you figure out what the game wants you to do.  That said, we’d have liked a little more guidance on some of the finer points of the game.

What really sets the game apart is the visuals.  If you hadn’t seen the screenshots you’d be guessing this was yet another 16-bit styled effort but what we get here are fantastic hand-drawn sprites that are colourful, detailed and absolutely gorgeous.  That’s not even the best of it though.  When you activate FEVER mode, by chaining together combo strikes, the game goes into full sugar rush meltdown mode and starts  spewing large colourful gems everywhere.  It’s fun, it looks great and it genuinely cheers you up.  You feel like you’re winning right up until some bastard demon kills your last party member.  The only slight downside is that while you’re clearing earning a lot of gems, this doesn’t seem to translate into lots of wealth when you get back to the main village. 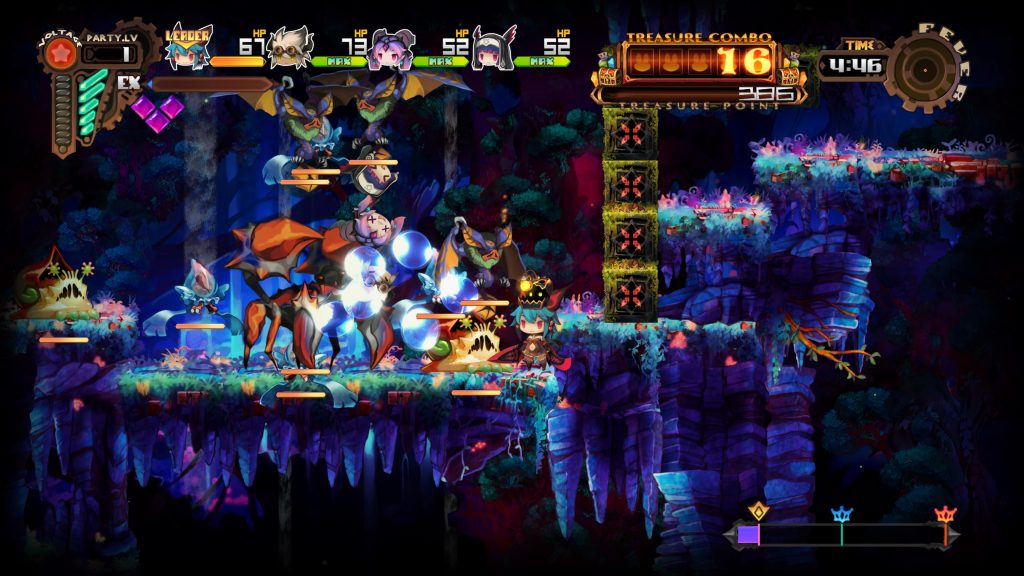 In this village you can buy supplies and gear, or modify what you’ve got.  It acts as a little hub world where you can relax between quests.  Another niggle though is that the quests can start to get pretty samey, especially when you end up visiting the same areas over and over.  The game is split into ten distinct areas with multiple quests in each one but for some reason the game likes to make you go back to previous worlds on your way to beating the current one you are in.  And it seems to recycle the levels, which feels like they are dragging out the game a little.

Overall though Lapis X Labyrinth is a cracking game which does certain things so well that it makes you forget about the stuff that’s not quite as good.  Well, not if you’re reviewing the bloody thing, but even so we were definitely enjoying the game more than we got frustrated with it.  It might have been a better game if it was just a hack and slash platformer in the true arcade style but the loot stuff is done reasonably well and messing around with your class builds is quite engaging.

If you’re an experienced adventure game player or just someone who likes to see joy represented visually, then Lapis X Labyrinth is a really easy recommendation.

Lapis X Labyrinth
8 Overall
Pros
+ Great combat
+ Brilliant, vibrant visuals
+ Lots of loot and RPG depth
Cons
- Can be a little repetitive
- Might be a bit complicated for some
- Controls need a little adjustment
Summary
Lapis X Labyrinth is an excellent hack and slasher with glorious visuals and some decent looting and RPG mechanics.