Race Arcade is something of a throwback. Sure, it’s not unusual for games to hark back to the days of 2D retrogaming, if anything it’s unusual when an indie game doesn’t, but this title really aims to capture that bygone era.  It is the latest release from Iceflake Games (a little known mobile game developer) and is a top-down racing game in the vein of Super Sprint. This isn’t a sub-genre that gets visited too often these days as racing games were one of the genres that most embraced the switch over to 3D polygonal games.

There’s no story to worry about with Race Arcade. In fact the game’s super generic title pretty much says it all, this is a racing game that’s a bit like the ones you used to play in the arcades.  Nothing more, nothing less. 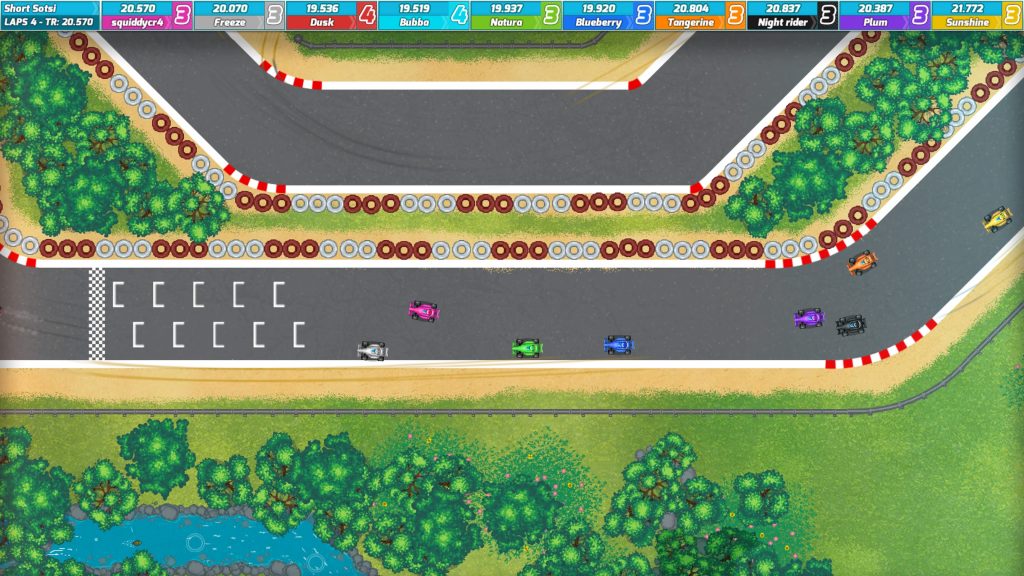 What you get is a career mode, single races and time trials. Starting in the career mode, you are initially given a basic rally car to start with and you have to work through three tiers of races which offer 5, 10 and 15 races in a Grand Prix format.

Winning events earns you cash and cash lets you buy different vehicles, each with their own three-tiered career progression. The vehicles range from various racing car types to tractors, motorbikes and even UFOs. These all handle differently in terms of speed, turning and impact behaviour but similar enough that it does all feel a bit samey. I shouldn’t be using the same tactics for tractor racing as I do for F1 cars.

On the track, the action is very simple. You start off on the grid and have to race around the track using a strictly top-down 2D view. These races are usually very short with lap times often being less than twenty seconds, although occasionally a track takes a bit longer to race around for some reason. 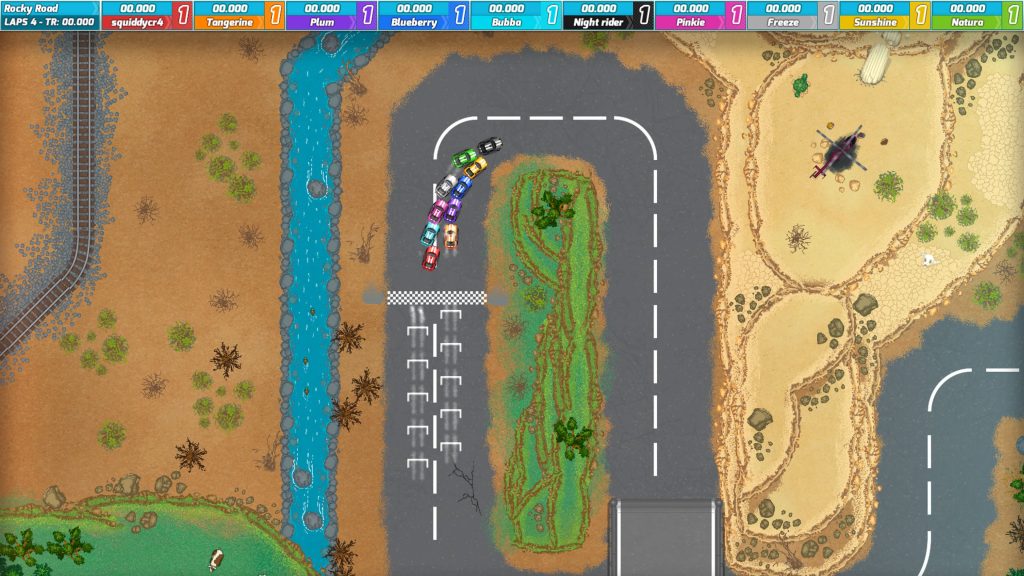 It’s okay though as you don’t want seemingly endless tracks because in this type of game one mistake is usually enough to ruin your race and so having shorter tracks means you don’t have to be perfect for ages. If you do mess up you can just restart the race which doesn’t affect your tournament standings so that’s fine although it does make things a little too easy.  Although we’ve had some of the longer tournaments crash out on us while we’ve been doing well, so that’s a bit of a shame but presumably is patchable.

While the racing works, there’s not much to it. Aside from basic steering all you have is acceleration and braking. No handbrake turns, no power-ups. The vast majority of tracks don’t even have shortcuts or those barrier things that Super Sprint had. It’s quite a purist approach but when your game is feature-lacking compared to titles that came out thirty years ago, you’ve got an issue.

For such simple controls, we were surprised to find any issues but if you use

for acceleration and braking,

seems to be entirely ineffective.  It may be that acceleration overrides braking but it feels odd.  You can use the right analog stick to do both (up for acceleration, down for the brakes) which is much more effective but feels a bit unnatural when we’ve been using gamepad shoulder buttons/triggers for twenty years for this sort of thing.   It does lead to more precise throttle control though so you’re kind of forced to use it.

Visually the game is a mixed bag too. As I said before, it is strictly 2D and has a flat, almost Flash-like quality to it. It looks so purely functional that we were surprised to see details like leaves falling off of trees when you crash into them as the graphic design is so simple.  We did appreciate those extra details but as you can see from the screenshots, the game is far from being a stunner. 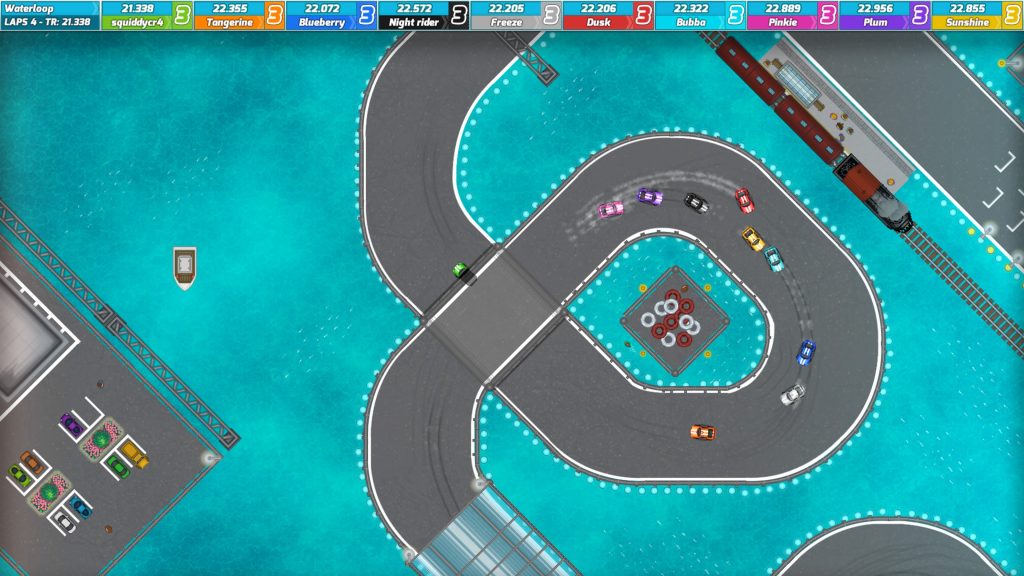 In multiplayer the view zooms out a lot (unless you pick split-screen) making everything tiny. You do have a choice of viewpoints in single player and these are welcome but it never looks good. There’s a lot going on in terms of visual detail but it looks so old-school that it all begins to feel very plain.

Also, the tracks themselves are lacking in features too. You’ll see the odd ramp, tunnel and hairpin corner but that’s about it. We love seeing creativity in our racing environments and you don’t really get that here.

One thing that is quite interesting is that the grid is placed in reverse order. If you’re leading a tournament, you’ll be at the back of the grid. This is annoying but fair in that the number two racer will be next to you and so on. There’s no real sign of rubber-banding either. So while you can be at a disadvantage, so is your competition and that feels relatively fair.

The AI cars can be a bit schizophrenic. Sometimes they drive perfectly and other times they’ll crash and will then lose their ability to pathfind their way to the finish line. UFO vehicles are particularly awful too as the tracks really aren’t designed for them and so they tend to end up in an immovable clump on certain corners. 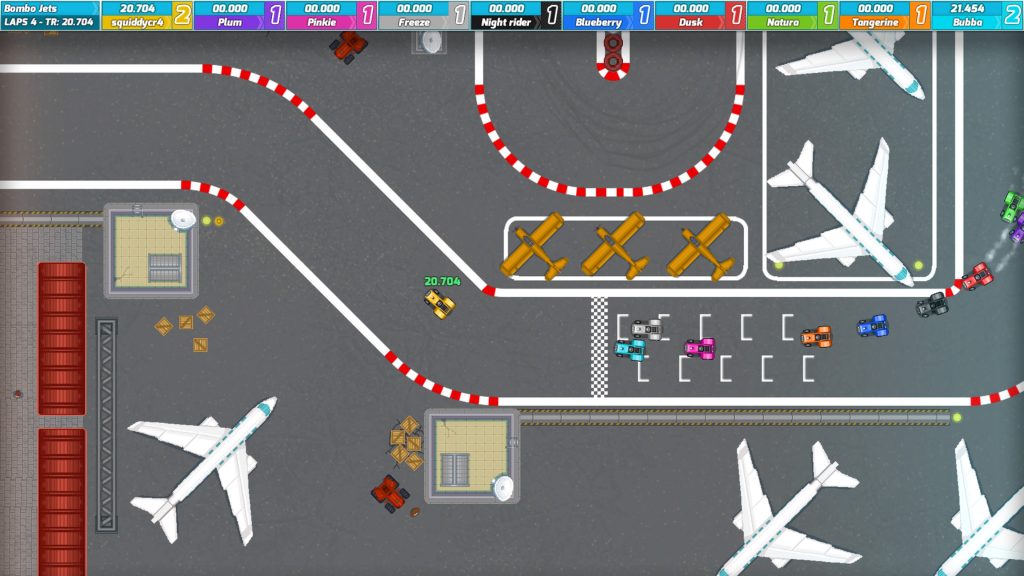 That said, for the most part the AI holds its own. You can also play with up to five other racers in local multiplayer but we can’t imagine too many situations where five of our friends our over and looking to play a super obscure Super Sprint clone. Your mileage may well vary.   Thankfully though you can choose between split-screen and zoomed out options for multiplayer.

As happens all to often, Race Arcade is one of those indie titles that sets its bar at imitation but never really looks to revolutionise the genre it is in. This is an okay game with average gameplay and average visuals but it has very little to recommend about it.

Fans of top down racers will have a lot more fun with Mantis Burn Racing which offers top down racing fun but with much better visuals, a more interesting campaign mode and tons of upgrading options. So that’s your better option right now but if you’re desperate to rekindle those Super Sprint memories, this’ll do in a pinch.

Race Arcade
5 Overall
Pros
+ Reasonably playable
+ Has lots of tracks
+ Non-punishing race reset option
+ Lots of cars on the track
Cons
- Overly simple gameplay
- Visuals are a bit too basic
- Controls aren't perfect
- Vehicle types all feel a bit samey
Summary
As a homage to Super Sprint, Race Arcade does everything it sets out to do but Super Sprint wasn't even that interesting thirty years ago. Putting out a game with such basic visuals and gameplay in 2018 feels like a tough sell for racing fans.