We confess, we only played the original Oh…Sir! The Insult Simulator for an easy completion. It helped it was cheap too. Unexpectedly though, we enjoyed ourselves for the most part. It was while browsing new releases on our generally neglected Xbox One that we spotted a sequel had slipped out unnoticed by us.

Whereas the first game was an unabashed love letter to Monty Python’s Flying Circus, even down to the trophies, Oh…Sir! The Hollywood Roast is very much a pastiche of the pomp and grandiose posturing that prevails in Tinseltown. You’ll play as caricatures of Hollywood tropes ranging from a filthy Gandalf-type wizard to an amalgam of Deadpool, Thor and Captain America called Wisecrack. All convincingly and wittily voiced. 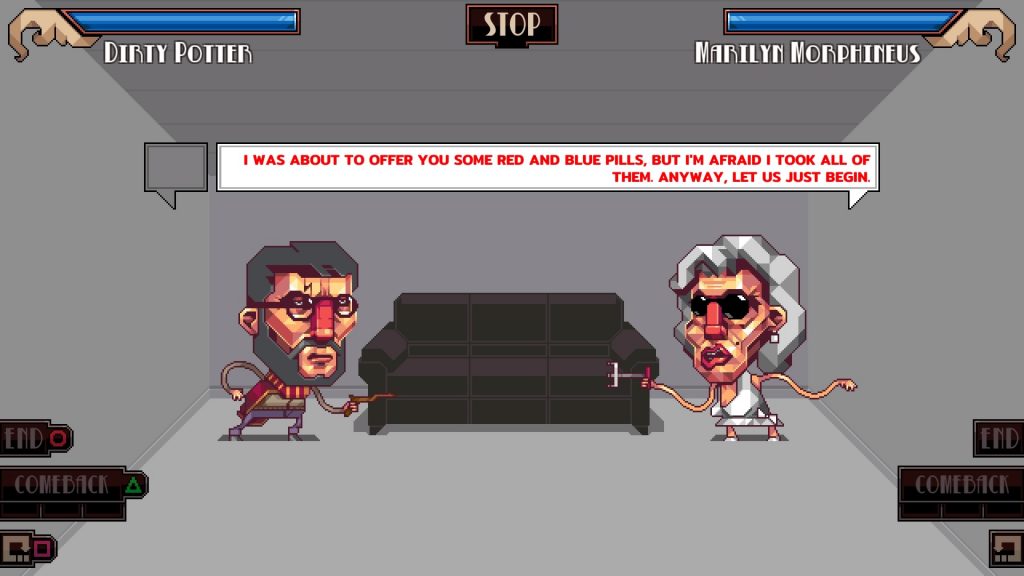 Assuming you aren’t familiar with the first game, you play through five individual battles or cuss-offs to coin a term nobody will ever use. Your character choice will dictate some of your stock vocabulary, for example Dirty Harry Potter has a mix of Clint Eastwood cliches as well as from the Hogwarts saga.

You’ll take turns against the AI (or a second player locally or via PSN) making up roasts from the snippets of phrases the game allows you to pick from a shared selection. Your insults have to be grammatically correct and you can come up with increasingly elaborate and overblown attacks by extending them with conjunctions like ‘and’ or ‘but’. 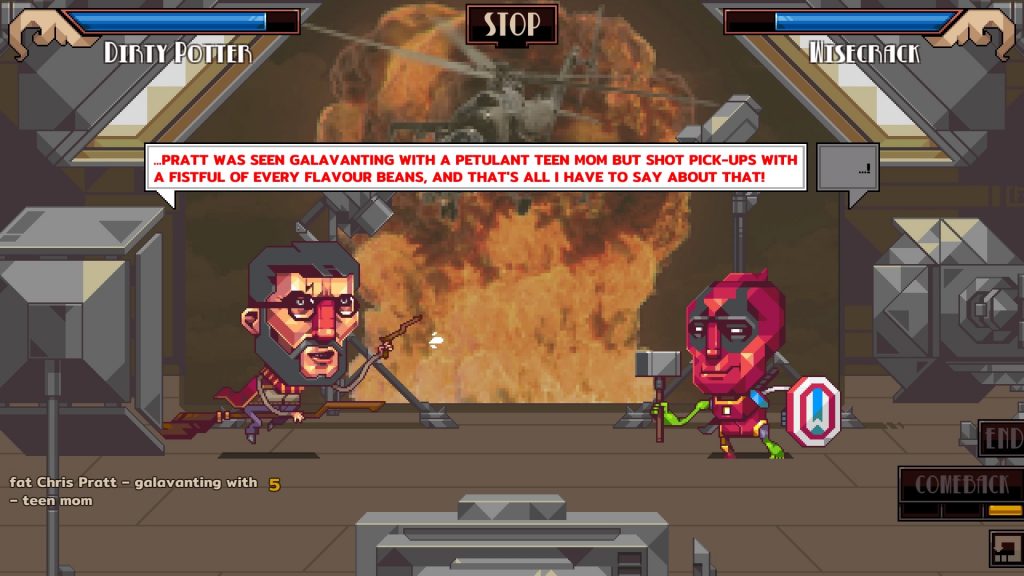 These extensions are the key to battering your opponent’s health bar quickly, as a short phrase won’t cut it. Combos can also be key, re-using a phrase from a previous attack immediately afterwards gives you twice the power from the same phrase.

As you can see from the screenshots, the phrases you can construct are pretty silly. Unfortunately apart from a few exceptions, the gags aren’t quite as good as the first game. More a wry smile of recognition here rather than amusement, the Monty Python connection being the secret sauce this sequel sadly lacks. 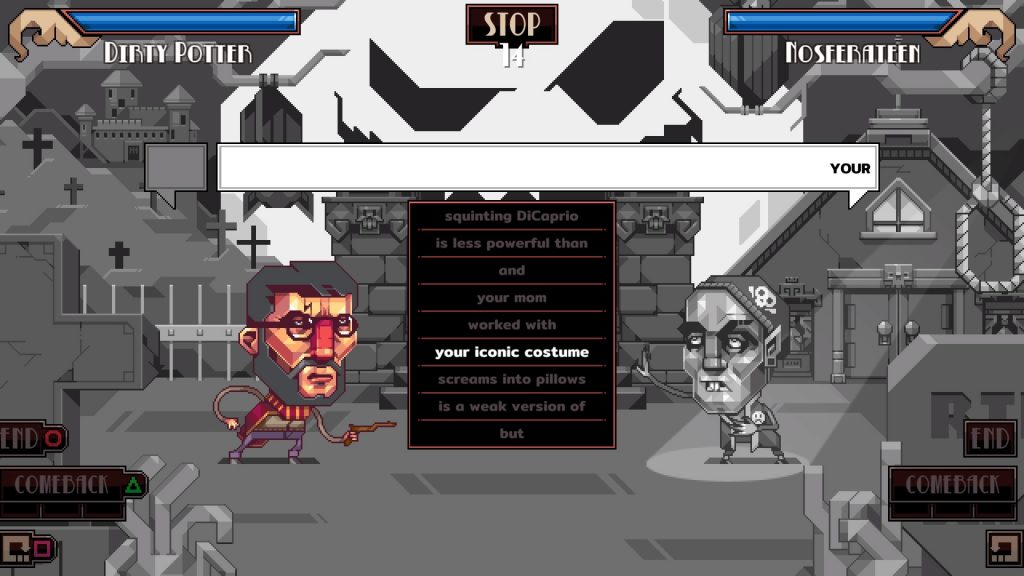 Once you’ve taken a few attacks, you’ll build a power bar and get a comeback. This is effectively a get out of jail card that gives your otherwise weak insult an extra boost. Each opponent has a weakness to certain phrase type too, for example their masculinity or their emotions (as in the case of the emo Nosferateen)

Each battle in the singleplayer campaign has sub-missions attached (use three comebacks or get a 3x combo for example), earning you a Golden Parrot aka Oscar for your trouble. There’s a trophy for getting all fifteen parrots for a character in a playthrough, just as there are further trophies for getting all the parrots for several characters. 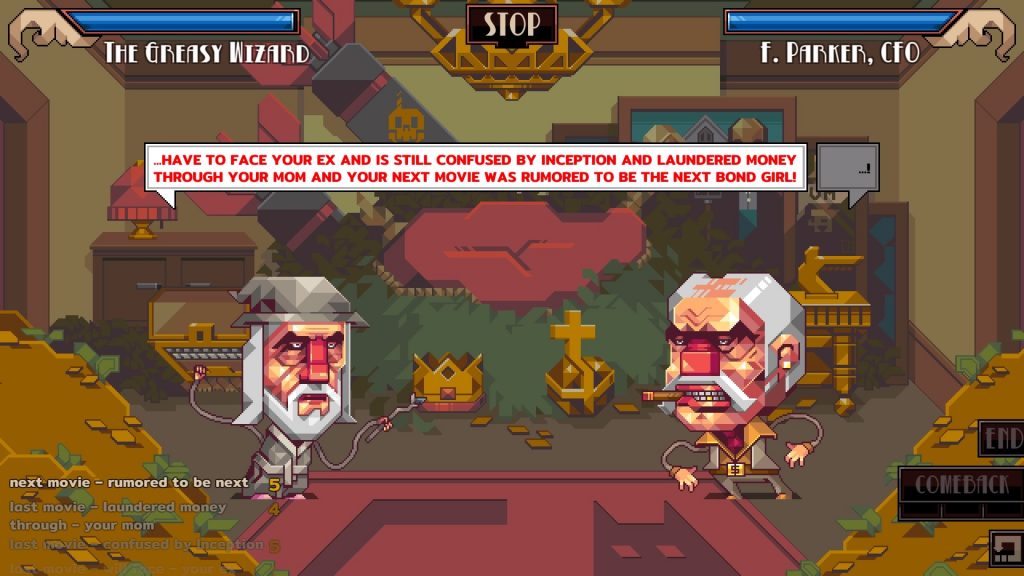 Ultimately though, once you’ve completed the campaign with all the characters, you’ll have seen all the game has to offer. Sadly the devs saw fit to include online multiplayer trophies in this game, so you’re in for the long haul if you want to get that platinum trophy under your belt. It’s all well and good if you have a boosting partner to play with, but if you’re looking to do this legit, good luck with that.  At least the first game limited your grind of 100 wins to offline play, making the wins online only seems like a pointless extension to the game’s shelf life.

Graphically, Oh…Sir! The Hollywood Roast is nothing to write home about, the graphical style rarely exceeding functional. Somehow the game is worse looking than the original.  The end credits tune is great fun though, a Celine Dion style caterwaul where the lyrics are entirely made up of insults from the game. It’s a great little Easter Egg and a treat for the observant.

Oh…Sir! has the advantage of being cheap and offers surprising longevity for what amounts to a one trick pony. It’s just a shame online trophies are thrown into the mix.  Certainly enough to make it outstay its welcome anyway.

Oh...Sir! The Hollywood Roast
6 Overall
Pros
+ Cheap
+ Great voice acting on the parodies of Hollywood tropes
+ Surprising longevity from what would otherwise be a slight package
+ The end credits song
Cons
- Never quite reaches the same level of humour or social commentary as the first game
- Online trophies in a boutique indie game? No thanks.
- Ultimately a one trick pony
- Somehow worse looking than its predecessor
Summary
This sequel is a silly pastiche of Hollywood in which you insult stars of past and present but isn't quite good, or funny, as its predecessor .