It’s been a long while since a new Wipeout has hit a Sony console. Now, at the end of the generation, R8 Games have taken the matter into their own hands. Pacer looks to emulate and pay homage to the feel of the futuristic racer. With imitations like this, they can be flattering and don’t always hit the mark. Pacer has managed to skilfully avoid it, mostly. 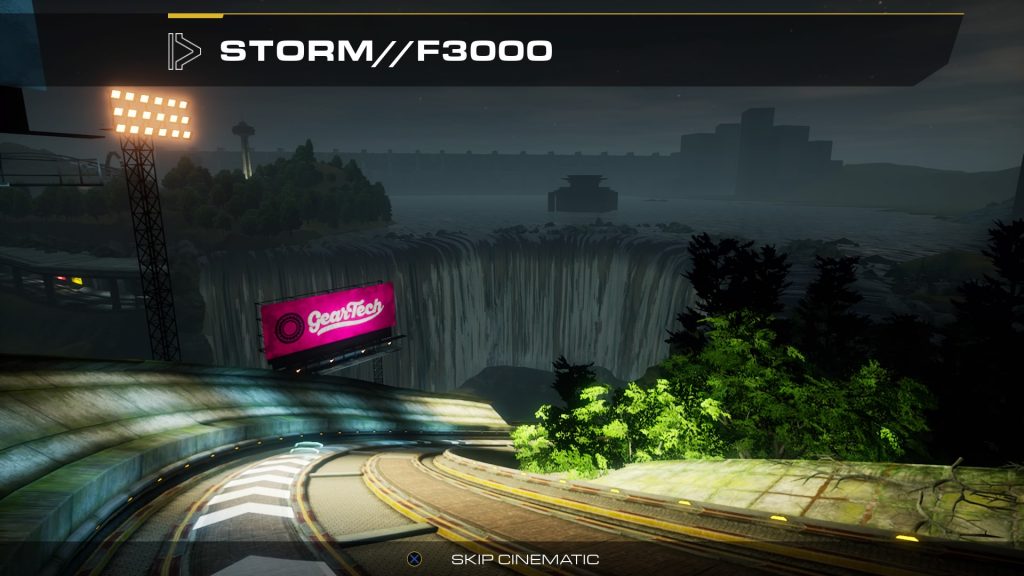 Pacer is ultimately a racing game. You race super-powered hovercrafts along tight, twisted circuits through some wonderfully neon locales. The vehicles handle fairly responsively, although the controls can take a little getting used to. You accelerate using the X button and use the triggers for braking. You have braking on your left and right thrusters and using them allows you to execute sharper turns.

It requires a little nuance but the vehicles all steer well and you can react quickly to the action happening ahead of you. One thing the game teaches you early on is the value of load-outs. You can gear your vehicle up in specific presets. It’s all weighted towards personal preference but you can set your ship up to drift better, deal in top speed, stay on the defensive and so on. As someone who knows they’ll smash off railings, I specialise in defensive weapons to regain shields and keep me alive for longer. 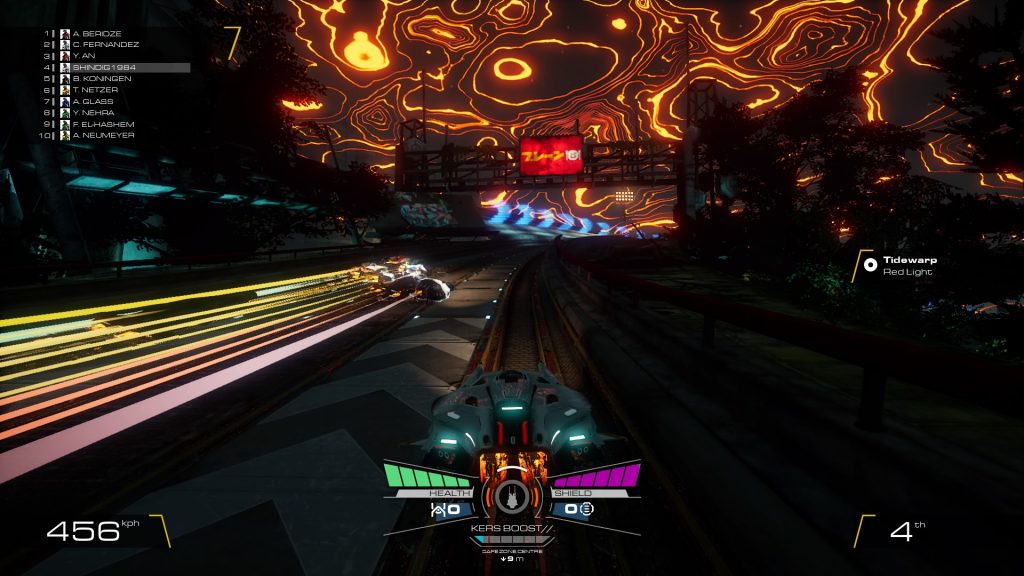 I find weaponry to be a little hit and miss. You get the usual long range missiles to play with and Gatling guns. I’ve always found aiming whilst operating a moving target to be tricky. Some weaponry does offer lock-on targeting but it appears the more offensively minded require more precision. It’s an okay selection but none of them feel particularly new for the genre. That said, I find tethering to ships and stealing shields is a great way to turn the tide in some of the elimination events.

It’s nice to have a handful to start with but you can customise these further by unlocking more weapons and parts. It can be interesting to tinker with your ship, especially if the race your on is giving you trouble. Your main racing will be done in the game’s campaign. It’s a little rigid in structure but this mode does offer some good racing. Competing gives you credits which you can spend to upgrade your ship and unlock tracks for some of the standalone modes. Unfortunately, there’s no way to tinker with AI difficulty and their effectiveness seems to be tied to their ship class.

Difficulty is something of a touchy subject. I’ve never got on with these games in the past but I have found the campaign to be relatively easy going. I’ve had a couple of events prove troublesome but the lack of difficulty options will prove a problem for veterans and newcomers at some point. At least the campaign is varied. Whilst there is a lot of races, plenty of variants are on show that give off the impression R8 has really considered the ways to race in Pacer. 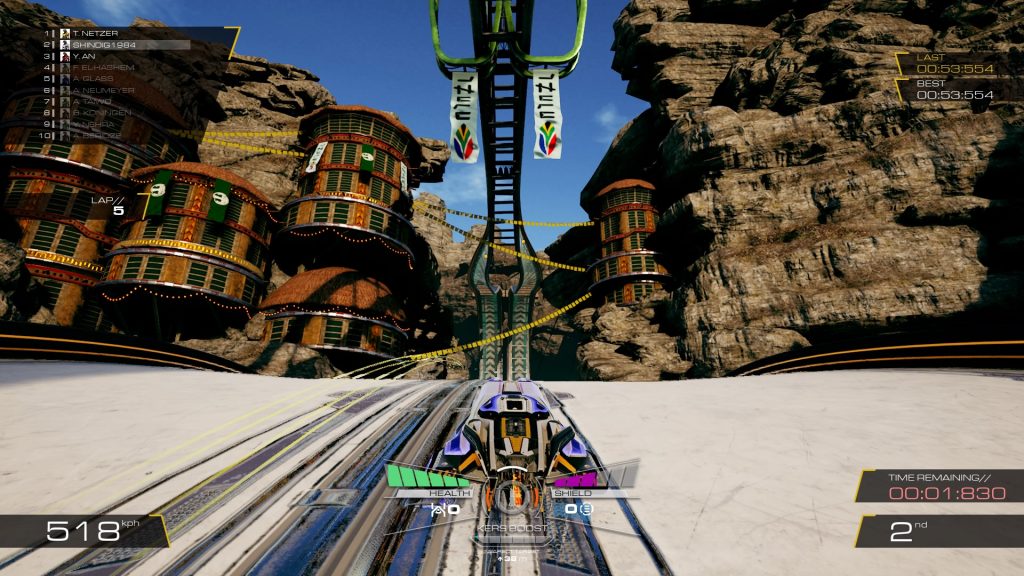 Some events task you with staying within an area to avoid damage, cover the most distance and even some twists on basic time trials. It’s refreshing and does keep the campaign moving at a brisk pace. Events are merely minutes long but I wish restarting was a quicker process. Despite the lack of difficulty settings, the campaign does get harder as you rise through the ranks. Generally, you move through the different ship classes. They introduce you to them with a handful of events before handing you over to take on a team’s contract.

Each step in the ladder has three teams to race for and, rather than they be a choice you’re locked into, you need to complete each of their events to progress. I don’t mind it as the campaign can be seen as a relatively short experience. Experienced pilots might find this a fairly light challenge but there is online modes on hand to provide more credible opposition. I don’t find the AI trivial but they definitely seem willing to come towards you in the final laps of a race. There might be some rubber-banding at play.

Pacer’s presentation is surprisingly well done. Whilst the menus are a little bland, the tracks, locations and ships are all nicely realised. There’s a lot of neon colours on display and they look the best at night. Struggling ships fart out white smoke when they’re close to being destroyed. Hitting boosts come with a lovely shift in momentum and the sense of speed is wonderful. It runs smoothly and it’s all very colourful.

Audio might be the one area where the homage falters just a touch. The soundtrack is competent but none of it really thumps or feels that memorable. It doesn’t overpower the action which is helpful when you get feedback on when your shields are depleting and your health is low. Hitting boosts, grabbing weapons and shield pick-ups come with audio cues as well. It does very well at keeping you informed, even if races bring some chaos. There’s a good atmosphere on offer and all the future corporate set dressing adds to create something great.

When you think about it, Pacer could’ve suffered hard when imitating something as specific as Wipeout. Thankfully, the marks are mostly hit with some exciting competition and a great aesthetic. The ships handle well with the load-outs offering you a quick way to prioritise whatever feels important for a given event. The campaign lacks some challenge but hopefully the online options can keep this game going. At present, there isn’t much of a community to play with.

Pacer
7 Overall
Pros
+ Vehicles handle very responsively.
+ The campaign is relatively brisk and varied.
+ The tracks are well-designed.
+ Carries a great, futuristic aesthetic.
Cons
- No difficulty options to speak of.
- Online lobbies already look barren.
- Some of the weaponry is a little uninspired.
- Some of aspects of the presentation and menus feel a touch bland.
Summary
Pacer delivers a fairly accomplished attempt at a futuristic racer. Whilst I do wish the campaign had some difficulty options, the racing has a good aesthetic and handles responsively. The ease at which you can switch load-outs is a lovely touch and the presentation manages to realise a very corporate super-future. I do wonder if the online options are enough to keep veterans interested but what R8 studios have achieved here is admirable.