From developer Blacklight Interactive and publisher Team 17, comes Golf With Your Friends. We freely admit that this is our first sight of the game that initially came out in May 2020, reaching us courtesy of Team 17 to publicise the new DLC of three additional courses penned the New Worlds Pack. We’ll get back to that at the conclusion of this review.

As the name would indicate, Golf With Your Friends is very much best played with others as opposed to solo. The default option is to play online, though forget randoms. At the point we wrote this review, admittedly almost six months post release, online is deader than this reviewer’s fashion sense. 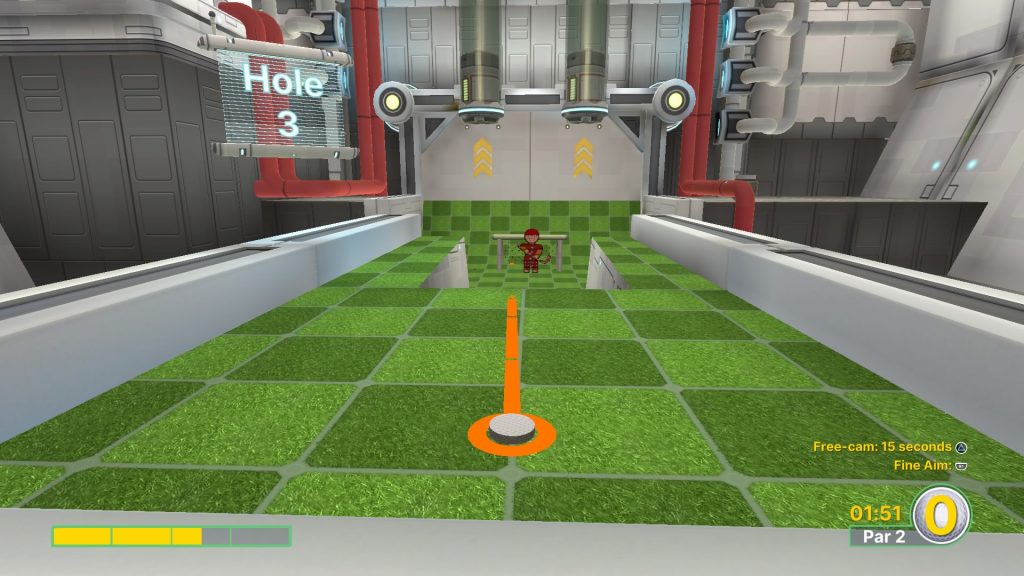 Thankfully local multiplayer is very much a thing, simply add additional players in the offline lobby. Much to our co-op partner’s delight, he’s been an integral part to our checking out the courses on offer here. Oddly, you can’t sign in to a second profile for the second player, so no progress towards trophies for them sadly.

Gameplay wise, this is very much minigolf on a series of themed courses. Forest is all verdant forests, just as Candyland is all confectionary themed. It works well for the most part but on a few occasions the additional mechanics thrust into the equation seriously mess things up.

This wouldn’t be so much of a problem if they didn’t sometimes have such a deleterious effect on an otherwise successful round. One egregious round had us under par until the twelfth hole, then two successive bad beats on holes had our until then decent score go out the window. 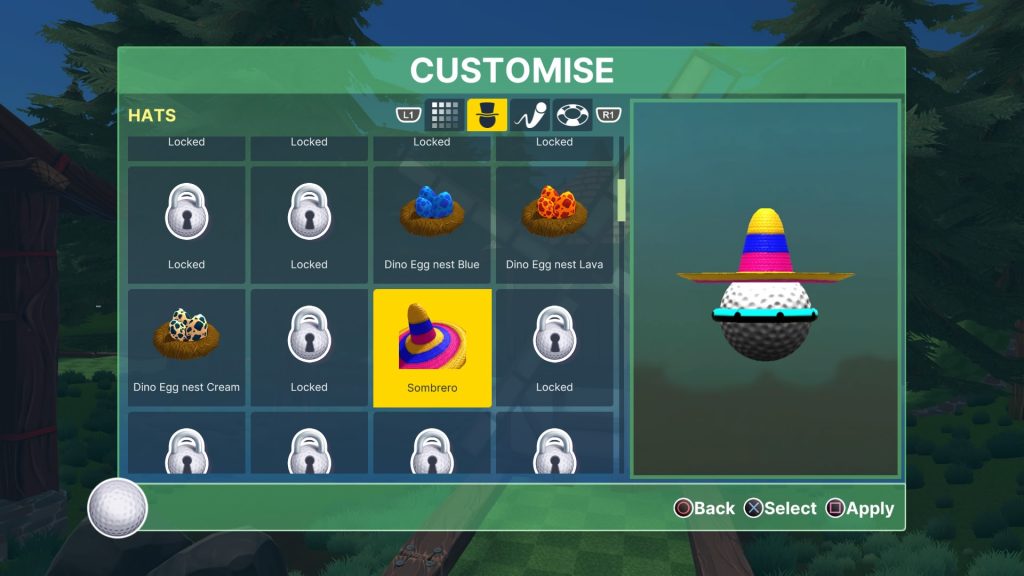 Space Station for example has blackholes. Or Worms has landmines and jetpacks. These  generally are fun enough and fit the feel of the themes but just as often they can lead to your undoing. We can understand the devs want to incorporate the themes of each into the mechanics of the courses, but when they lead to you running out of shots or time and getting a stroke penalty, they get old.

The obstacles and complications are such that you’ll often do well to be second to tee off, assuming you’re playing with another player. Heck, if we were playing all out for the par trophies, we’d have as many extra hot seat players as we were able to give ourselves plenty of opportunity to practice.

You can flyby on the courses but you only get fifteen seconds total. Combined with the fact the game clock keeps ticking while you flyby, you’ll inevitably end up hitting and hoping for the best. This works just fine on early holes, but it’s a pathway to ruin in the latter stages of a round. It doesn’t help that you’ll often struggle to know where you’re even supposed to get the ball, certainly with default settings anyway. 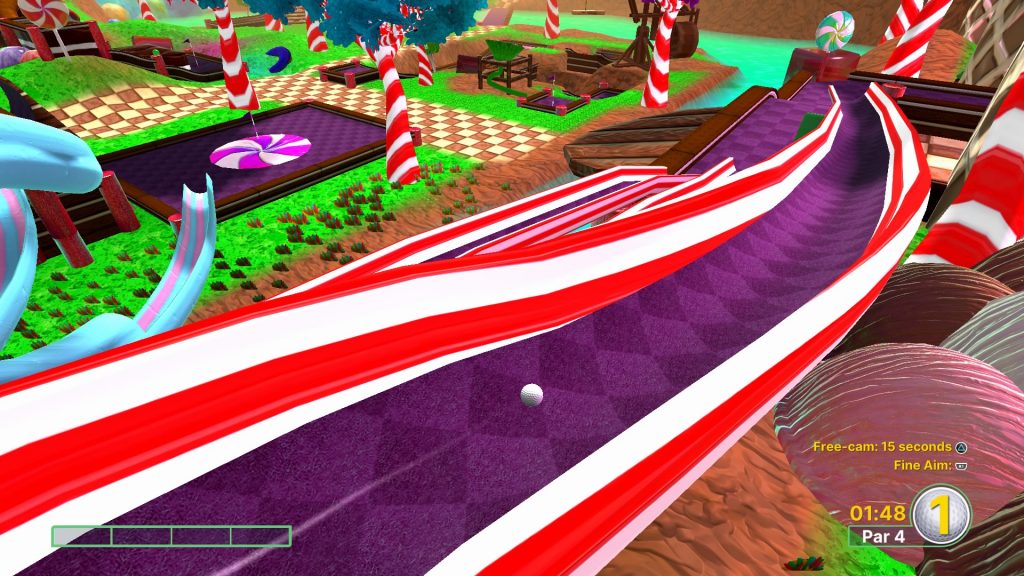 It might seem like we’re overwhelmingly focussing on the negatives here, but when you’re battling the courses rather than your opponents, it’s a little hard to shake that feeling.

In addition to standard pitch and putt, you’re able to play hockey mode & dunk mode. Hockey works really well in terms of the fact you’re playing on the same courses. Rather than the idiosyncracies of putting, you’re just having to get the puck past the goalie into a net that’s roughly where the hole would be otherwise.

Dunk mode though. We tried and tried to play it, but got nowhere. It’s too reliant on a decent approach to a hole. Perhaps we’re playing it wrong, but it’s symptomatic of something else that bedevils Golf With Your Friends. All too often, you’ll be caught out by ill-explained mechanics and just expected to get on with it. Trial and error plays too much of a part unfortunately. 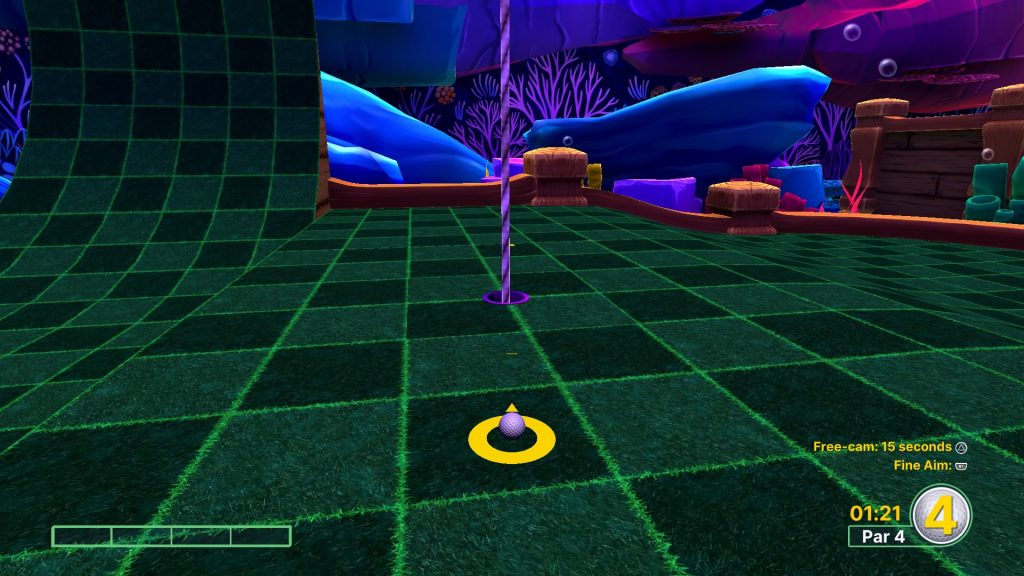 Before we close up, the three additional courses added via the newly available DLC pack are mostly good. The Escapists course, based as it is on the Team 17 prison release is better than we’d necessarily might’ve expected. Only a couple of the holes were overly luck based, so good will wasn’t eroded. The Deep is also a good undersea themed course.

The third and final course Volcano is the idiot cousin of the batch unfortunately. It’s OK in the early stages but the further you progress, the worse it gets. Put it this way, par was 61 strokes and we got round in 136 strokes. Eight of the holes we got double figure scores on. Very little fun to be had, it’s just too attritional.

In conclusion, just as the title suggests, Golf With Your Friends is best played with other humans. But the barren wastes of online play relegate this to a local hotseat only affair unfortunately. It’s a fair minigolf game but the putting is frustrating and latter holes are just that little too luck based. Forget trying for the par trophies without a second player, put it that way.

Cons
- Dead online unfortunately
- Preview mode is sparse
- No nuance in putting
- Can be hard to find holes
- Dunk mode doesn't work too well
Summary
Golf With Your Friends is a mixed bag. To run with the golf analogy, some clubs are great, others are going to leave you gasping in exasperation. It's better with friends, but sadly the moribund online means this is a local only affair. The three new courses are generally good barring Volcano.