It’s a stone could fact that there are more visual novels born than people these days. Sure enough, another one has crossed my path asking me to look at some anime artwork whilst trying to pay attention to some dialogue. It’s Nicole‘s turn. Coming from Winter Wolves, this dating simulator adds more interactivity and characterisation but some clumsy pacing can hamper the enjoyment. 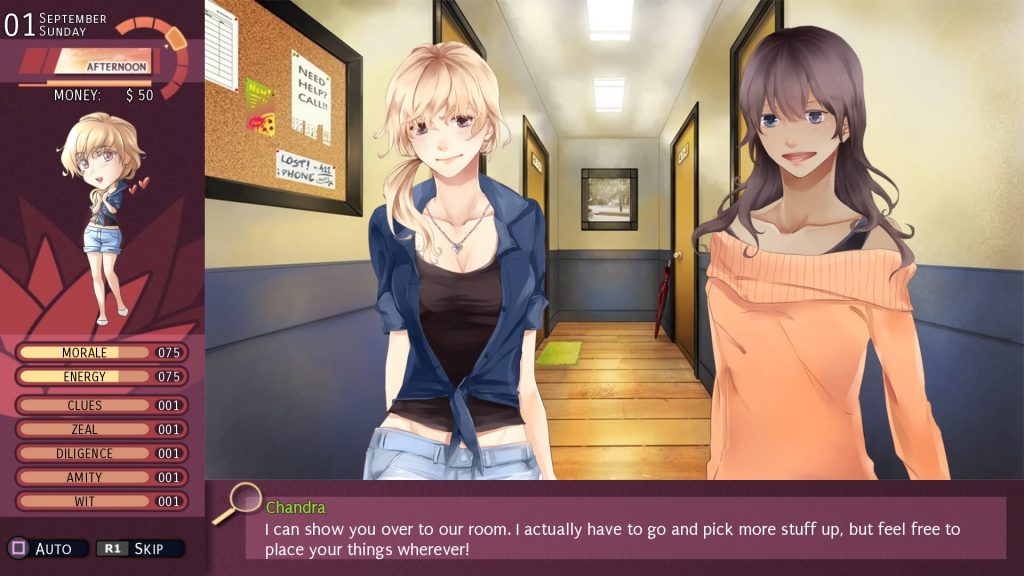 Nicole‘s story is one of college, boys and abduction. You follow the titular Nicole through her first year of study. During that time, she finds four boys she could romance or befriend whilst also becoming a target of a serial abductor. The dating doesn’t initially appeal to me but the mystery does. Sadly, this is introduced in a rather throwaway manner and then pushed out to the periphery. It comes back into focus in the latter stages but the actual crime-solving feels slight and there’s a lack of urgency coming from Nicole, until she’s in the culprit’s sights.

You have an option to play this as a standard visual novel, sacrificing some of the better endings in favour of a story that doesn’t deviate as much as the standard manner. Nicole allows for you to build up stats as you chase guys and attempt to solve the mystery. On a day-to-day basis, you can choose activities to increase these attributes. These usually come at a cost of your morale, energy levels or money. There’s plenty to choose from but they’re not very involved. 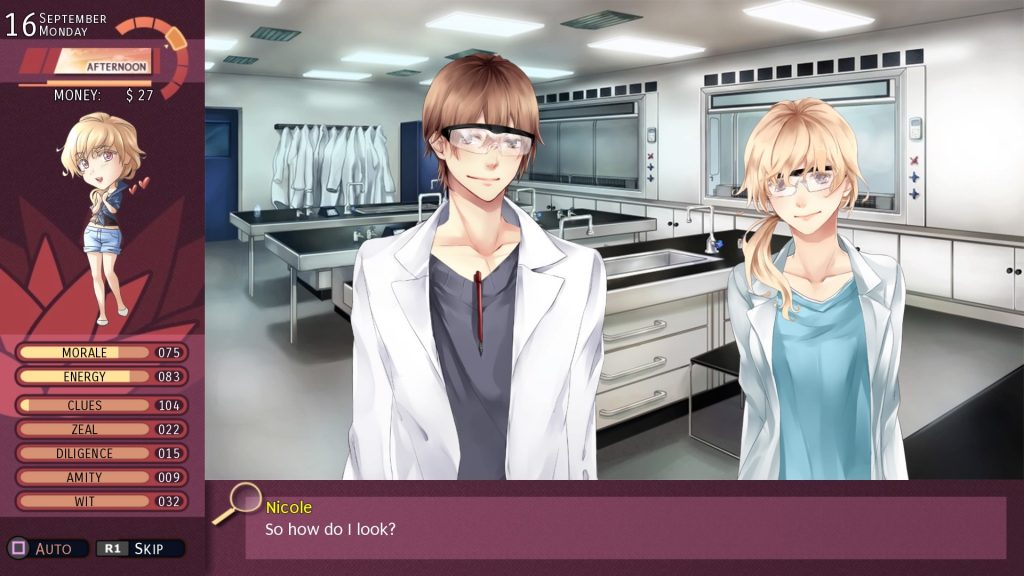 Whilst the stat building does have a purpose, there’s a feeling of grind to it. I get a sense a few attributes are redundant and fairly meaningless to chase. As a result, you’re focusing on whatever your guy is into whilst also trying to gather enough clues to solve the mystery. It’s nice to have some more interactivity in a visual novel but this feels monotonous and drab.

On a first playthrough, I felt I’d committed solely to solving the mystery, leaving very little room for romance and ultimately, the better endings. Not that the game doesn’t drop you hints when it comes to the boy’s interests. They’re nearly always tied to a location and jobs arrive partly through the year to allow you to boost the relevant stats. You have around 100 days to play with but there’s surprisingly little room to manoeuvre.

The dates themselves seem fairly interesting, even if they do settle into some archetypes. Jeff’s the Scientist who takes a rather cold view of the things around him. I liked Kurt’s subversion of the jock stereotype. He’s not an idiot, although he initially plays it up. It’s during these interactions where the character building shines. Nicole is a fairly slow burn and pursuing the guys gets you some substance to a male cast that, if I’m honest, need differentiating. They may have different personalities but everyone in this game has the same face. 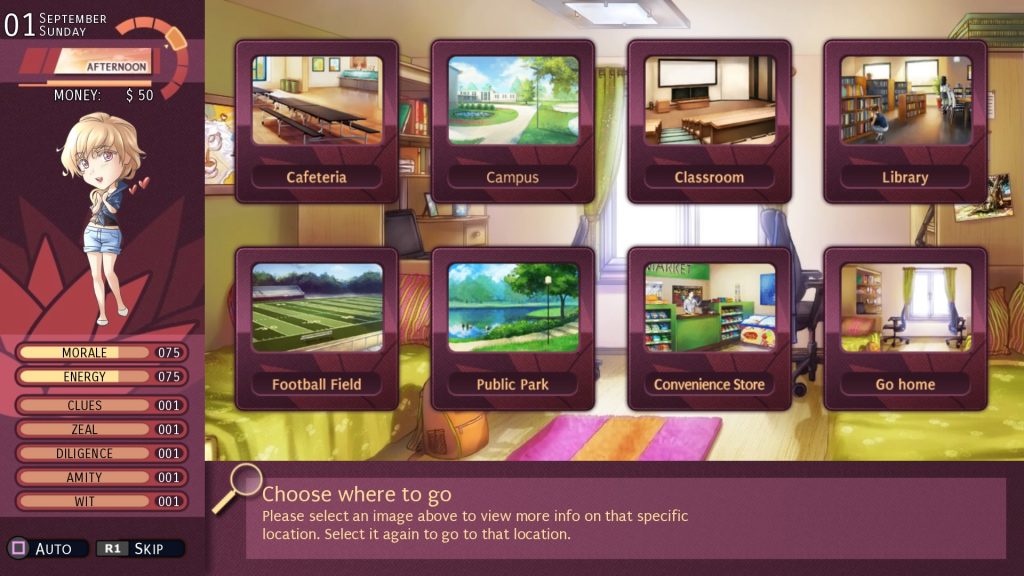 It’s my one glaring fault levelled at the game’s art and there were definitely times where I saw someone enter frame and not know who it was by sight alone. They might wear different clothes but that doppelganger expression always made it difficult for me to tell them apart. It’s a common problem across most of the cast but at least the backgrounds are nicely rendered and varied.

When it comes to giving gifts, there’s very little in the way of clues to go off. They tend to unlock special endings so it’s the kind of aspect where a guide is crucial, or some good old trial and error. Gifts tend to be your main way of spending money. Whilst you can spend cash in other ways, it doesn’t feel as necessary as the gifts. Jobs ultimately fund it and paying for the accompanying boosted attributes can be worthwhile.

It does feel like the game is structured into two distinct halves with the first chunk almost exclusively for relationship building. It makes the crime-solving feel fairly tacked on and it rather abruptly comes back into view towards the end. Meters do inform you of your progress at the end of each day, but it all felt a little laboured. The lack of urgency made it hard for me to really get invested. 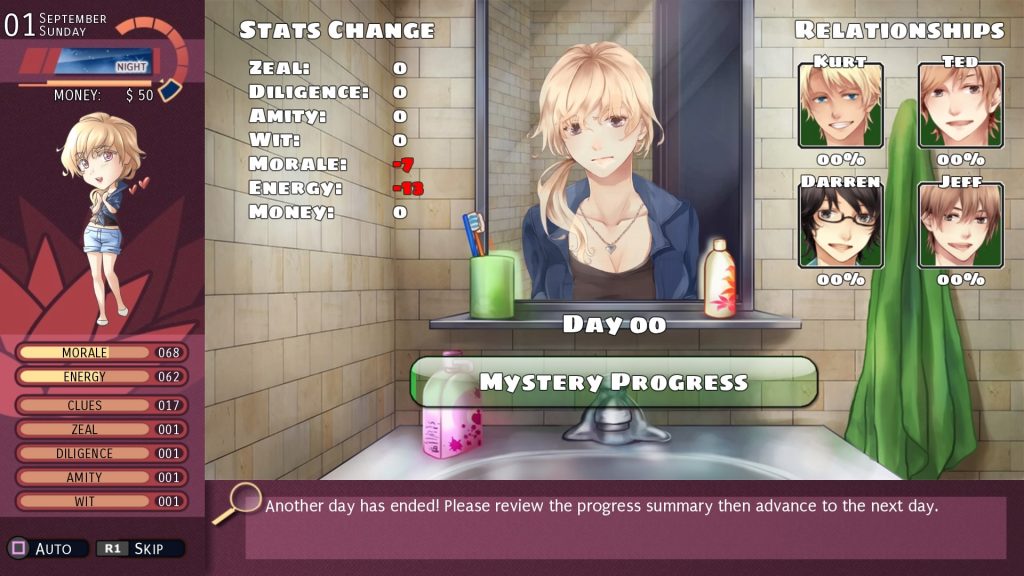 It also led to a couple of the endings feeling rather unsatisfying. I landed a Very Bad ending on my first playthrough and it makes Nicole out to be a complete moron. The requirements for the other endings feel like quite a commitment and sometimes a guide feels necessary to ensure you’re on track for specific conclusions.

Overall, I found Nicole‘s story to be a little schizophrenic. It has such a leisurely pace whilst the abduction plot is waiting in the wings. By the time it picked up, I was already bored. The dating allows for some interesting character interactions but a little bit of hindsight is needed to truly get the best out of the relationships.

Nicole
5 Overall
Pros
+ There are moments of good character building.
+ The artwork is well done.
+ Stat building gives you something else to focus on beyond reading the story.
Cons
- Horrendous pacing.
- The character portraits are sometimes difficult to tell apart.
- The good endings need serious commitment to unlock.
- The mystery plotline takes forever to get going.
Summary
Whilst there's a surprising amount of endings to uncover in Nicole, the act of getting there feels tiresome and monotonous. There's a decently sized cast to interactive with but it's all handled at a slow pace. The stat building strangles the immediacy and the requirements needed for endings lead to a serious grind. There's some decent characterisations here but this game struggled to hold my attention.