From Valencia-based developer Mighty Polygon and publisher Ravenscourt comes Relicta. That title being spectacularly non-descriptive, Relicta is in fact an Unreal Engine-powered physics based puzzler. It’ll take you a while to get to the actual puzzles though as there’s all sorts of plot nonsense that gets in the way. And joy of joys, it’s entirely unskippable.  The disembodied hands you control via a first-person view belong to Angelica Patel, the mother of Kira Patel.  Were it not for the dialogue she might as well have been called Angelica Freeman, so wordless is she otherwise. 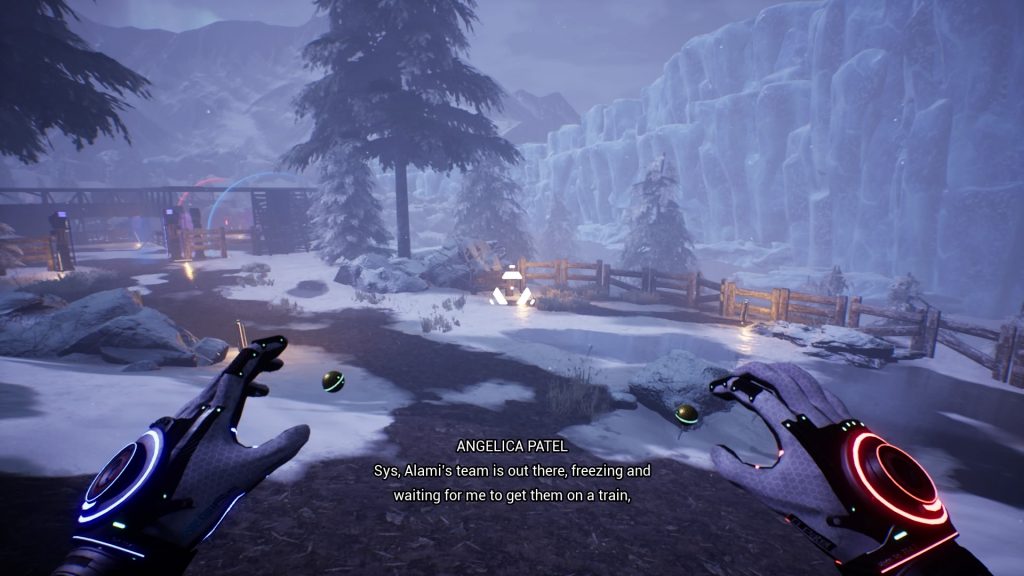 The dialogue interaction between her and her daughter is all very fluffy as you might expect. There’s also lots of sweary chatter between Angelica and her immediate superior. It’s a bit jarring to be honest and what with the unskippable part, if you switch off before a checkpoint as we did, you have to watch it all over again. Angelica seems such a well-spoken Indian woman, that to hear her swear so frequently is almost shocking in the same way as it was when you first heard your own parents let a profanity slip.

The setting is on what purports to be on the Moon, your main hub being in a place called Chandra Base. This is all well and good but on the face of it, what you actually encounter is a series of biomes from verdant lush forests to icy wastes and points in-between. 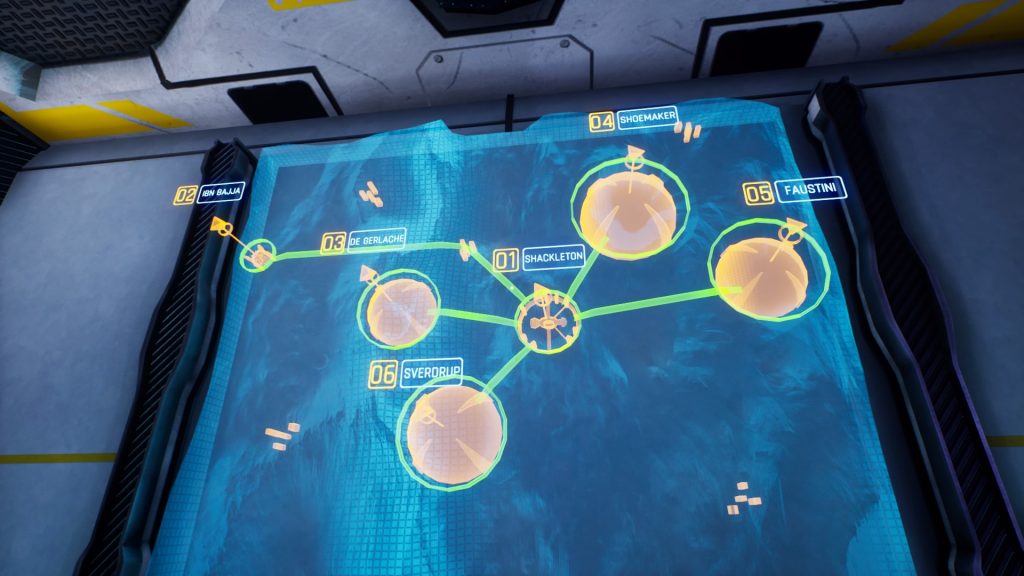 Your gauntlets initially are limited to just picking up items, but soon you’ll gain the ability to change magnetic polarities. You’ll also be able to set blocks to be more likely to fly. Practically this means you’ll set one block to positive and the other to negative charge, handily denoted by a red or blue bubble showing the magnetic field.

You can then flip the polarity of a block which will cause it to be repelled from the adjacent block of the same charge. When you’ve set an item to fly as well, it’ll be flung up in the air upon repulsion. Another key mechanic involves using one item on the side of a wooden wall and one on another to repel or attract it. 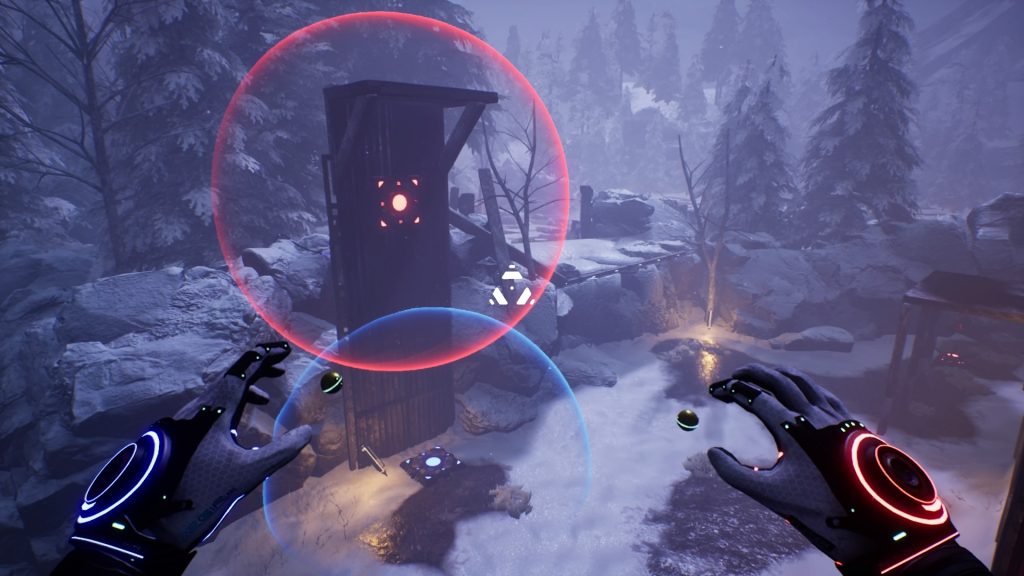 The problem being that the further you progress, the more narrow each solution becomes. Before we hit a wall, we’d made pretty good progress but couldn’t work out how to get past one level in some caves. Try as we might, a stalactite kept getting in our way on the third stage of one elaborate puzzle and we couldn’t figure out a solution. The early levels give you a little more space to be creative, but not much. It’s all very heavily curated.

Not to mention that the moonbase setting all seems very superfluous, just as the plot is. Yes, we get it’s a nice way for UE to flex its muscles and the biomes are all dead pretty, but you never actually feel like you’re on the moon. An actual moonscape with discarded lunar mission debris would’ve enhanced the sense of place tenfold. The suspension of disbelief isn’t there, just as it is in a sci-fi film when you clock those same rocks where James T Kirk battled a bloke in a rubber lizard suit. It breaks the immersion. 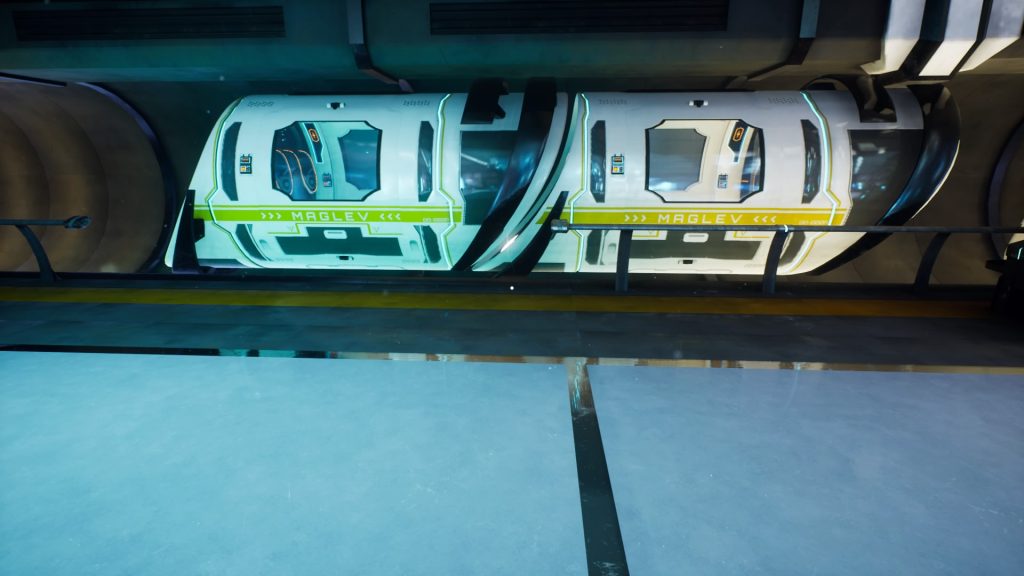 Sure, the space station is all very well realised, but with nobody there but you and a few automated drones, the reliance on voice logs starts to wear a little thin. When we discovered the maglev, we had flashbacks to Dead Space and were a little worried about what might transpire. No space janitor hijinks beyond those described by your superior thankfully.

Additional backstory is communicated via datacards and other collectibles, but when the extra content is text only in your PDA via 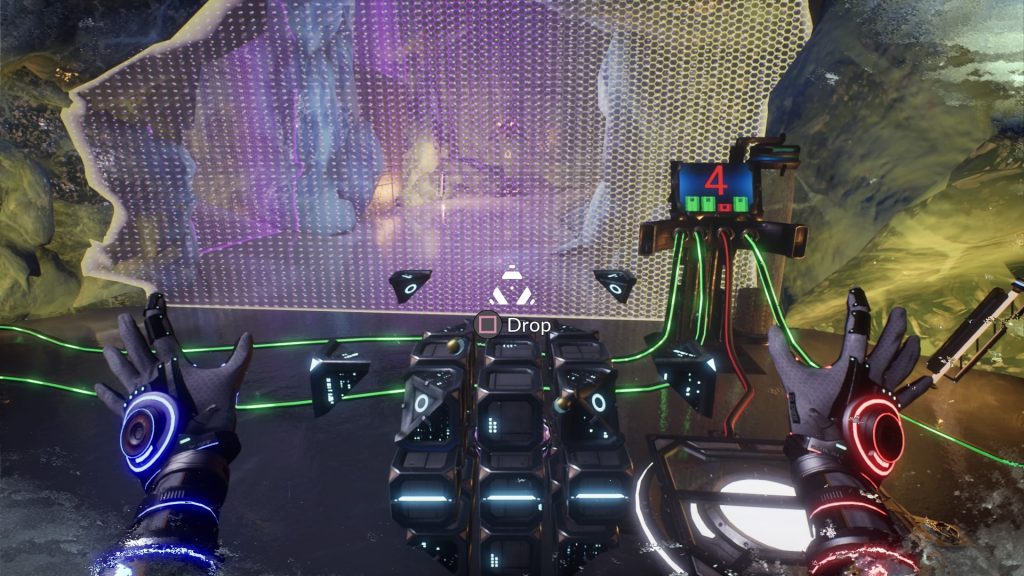 In conclusion, Relicta is a lovely showcase of Unreal Engine with some canny physics based puzzles. But it hits a difficulty wall far too quickly and the forgettable plot just feels like it gets in the way. Perhaps one to revisit once YouTubers have created video solutions for each  puzzle.

Relicta
7 Overall
Pros
+ Nice magnetism and repulsion based puzzles
+ Often beautiful due to Unreal Engine biomes
+ When you have a eureka moment and solve a puzzle, it’s all good

Cons
- For a game set on the moon, you don’t have any sense of being there
- The further you go, the more often you’ll be stumped
- Plot is superfluous and sweary  well –spoken ladies are jarring
Summary
Relicta is a beautiful physics based puzzler with sweary Indian ladies. It’s fine but prone to arbitrary puzzle solutions halting your progress altogether.