Neverwinter Nights is rightly lauded as a classic role-playing game and, until now, it’s never graced home consoles. Sometimes these PC efforts can find it hard to transition to a controller and the added obstacle of time itself can make these port sink, rather than swim. With Beamdog at the helm, Bioware’s 2002 take on the Dungeons & Dragons license has a chance to shine in front of a new audience. 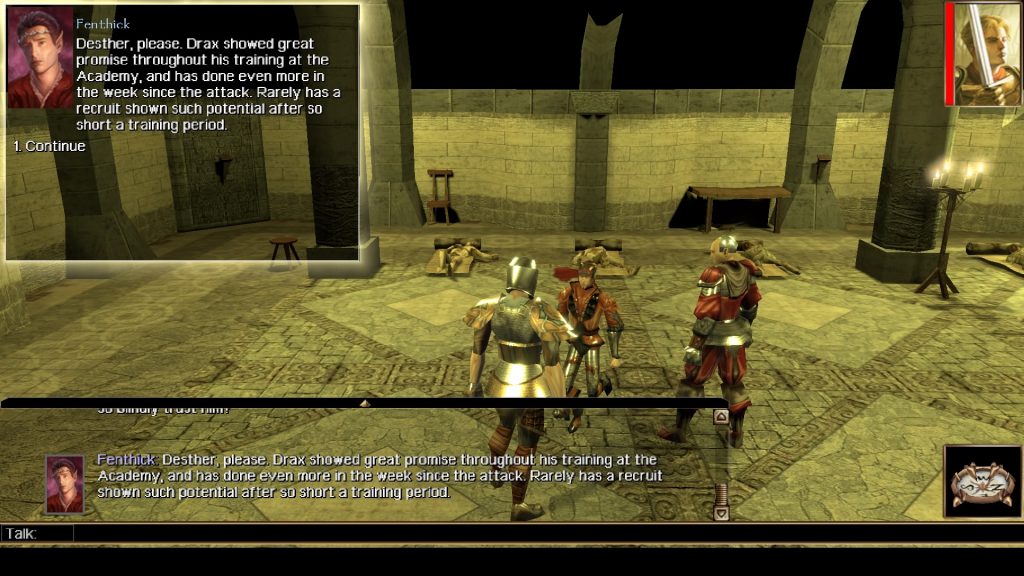 What Neverwinter Nights: Enhanced Edition gets you is the base campaign along with the several official expansion packs and modules which were released throughout the game’s lengthy lifespan. It amounts a very sizeable sense of value with hours upon hours of content at hand. It’s not entirely everything with the Infinite Dragons module being omitted. That’s a shame for anyone wanting some randomly generated dungeon crawling. Still, it’s a near complete collection that shows the best of what Neverwinter Nights has to offer.

Almost immediately, you get a sense of what Beamdog have concentrated on for this port. It is not exactly an overhaul with original assets seemingly being shown at their native resolutions. Story cut-scenes are windowed, grainy and do very little to disguise their age. Once in gameplay, the console edition looks on par with the PC counterpart. Textures and geometry don’t appear to be upgraded hugely but lighting has seen improvements. If you favour authenticity in your re-releases then you’ll be covered. For me, I would’ve liked to have seen more polish and more effort made to bring an aged series into modernity. 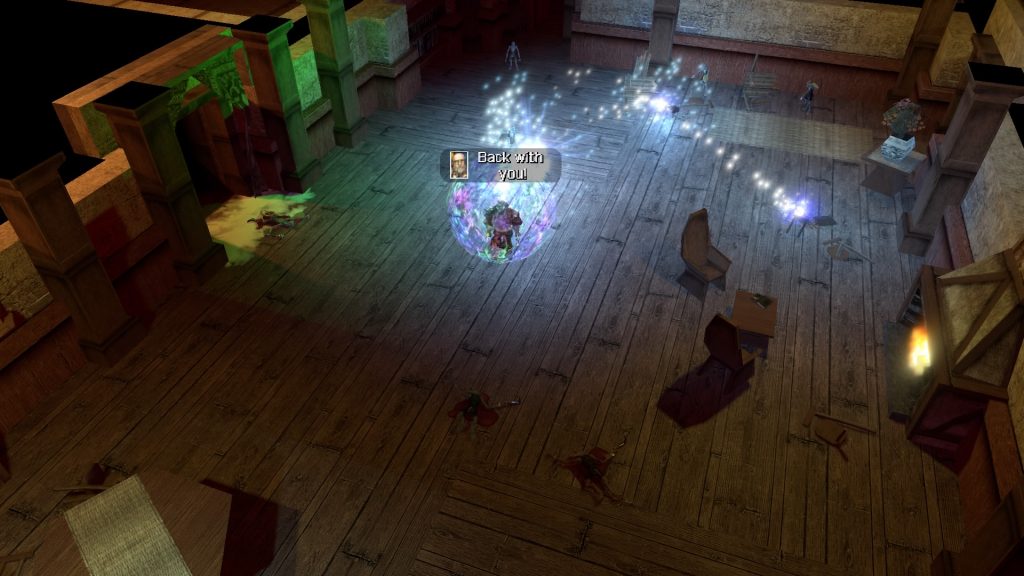 Controls always seem the biggest challenge when transplanting a mouse and keyboard driven interface to a console. Beamdog have favoured direct control for movement which works well. To give the player quick access to key items, you can enter your inventory and assign them to a radial menu. You can also pause and queue actions using the touchpad. Once you’re used to it, you can find what you need in the heat of battle That learning curve can take time. On top of that, Neverwinter Nights: Enhanced Edition‘s tutorials are very basic with only text explanations on offer. Shopping becomes a clumsy exercise as you navigate your way to the correct tabs and make your purchases. Again, it’s nothing you can’t get accustomed to but it is not intuitive.

There was an opportunity to give players some conveniences but they appear to have been sidelined. For one, I would’ve loved an option to show the map by default. Using the start menu to access it slows me down and feels a little clunky. Despite this, I did get used to this control scheme and could ultimately enjoy the game for what it is. 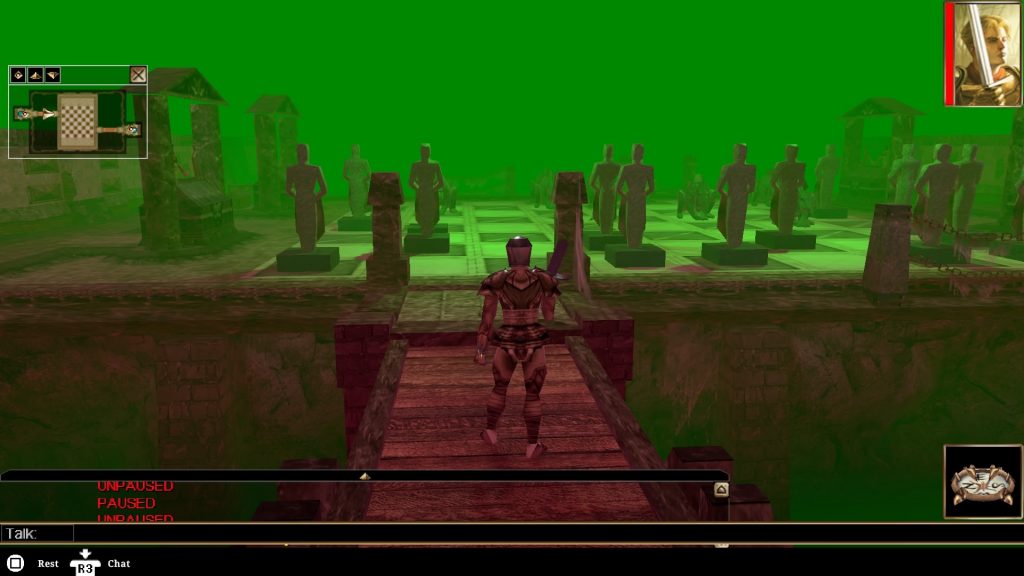 And that game is still enjoyable, after all these years. The age is very much on display but, as someone coming to the series completely new, it won me over. There’s an impenetrable quality to tabletop RPGs that initially troubled me but the dice rolls are explicitly displayed. The geometry does a fine job of looking like a board you’re playing on. In that sense, I can appreciate how accomplished Bioware’s efforts were. You also see a company still finding their feet with storytelling. The original campaign of Neverwinter Nights had a fairly standard fantasy tale of dire straits, obvious double-crosses and player choice was minor, at best. The better narratives would come with the later modules as the writers grew in confidence.

There’s plenty of quests to venture into, people to talk to and plenty of depth to plunder when it comes to character building. Again, I wish it was an easier for a newcomer to get onboard. Some item descriptions don’t dive deep enough and I did feel overwhelmed in the opening hours. Maybe that’s a product of early 2000’s design but it’s a hurdle every new face has to tackle.

Sadly, this port has been struck by some significant technical issues. From my own experience, I’ve found player characters jammed by geometry. I’ve had a couple of hard crashes and, most bizarrely, I’ve had my character creation mean absolutely nothing as the prologue starts me with an entirely different race, alignment and gender. I did find my original character sitting in the pre-made selections but why couldn’t I carry him into the prologue? 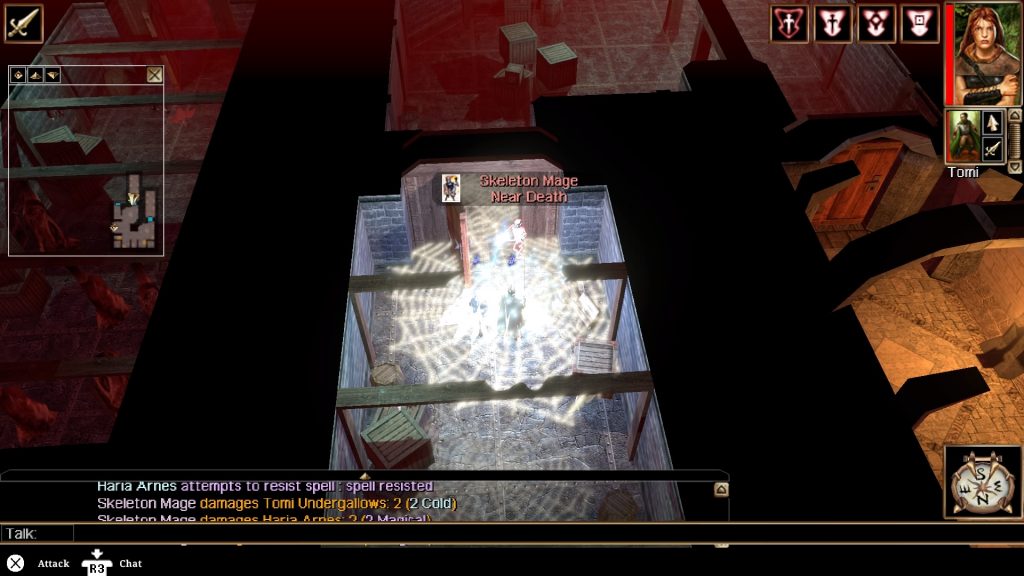 It doesn’t make the greatest impression when so much hassle came during introductory stages but, touch wood, I’ve not have any deadly stoppages since. Save often. The game does quicksave but not nearly as often as you’d want. I’ve yet to see any patches download so I can’t say whether Beamdog will rectify any of these issues. I am enjoying Neverwinter Nights: Enhanced Edition in spite of the technical woes but there’s always a concern when you could lose progress to your character being lodged in a footstool or a crash to the menu.

Your tolerance may vary but this package has a wealth of content to explore. There’s very few quality of life improvements but, as a newcomer to this type of role-playing game, I was still pulled in. The controls can take some time to conquer and there’s almost an overwhelming amount of information to absorb but, there’s a satisfaction to success. Hopefully stability can arrive through patches.  Until then, save regularly.

Neverwinter Nights: Enhanced Edition
7 Overall
Pros
+ A chance for console players to experience a genuinely great game.
+ A gigantic wealth of content to enjoy.
+ It controls fine on a pad with movement handled well.
+ Deep and fulfilling, if a little tough to get to grips with.
Cons
- Technical issues ranging from being stuck in geometry to actual crashes.
- Shopkeeping and inventory management can be fiddly.
- Very little work done to the original assets.
- Few quality of life changes, if any.
Summary
Neverwinter Nights: Enhanced Edition is a rich collection of the role-playing classic. There are hundreds of hours of fun at your disposal but it's saddled with technical issues that are impossible to ignore. Vigilant players will need to save often and have high tolerance for such problems. It stays faithful to the original assets in a way purists might enjoy but some more quality of life and graphical improvements would've been welcomed. As a newcomer, I rate this highly but veterans won't find much new here.