Cardpocalypse is brought to you by Irish developer Gambrinous and publisher Versus Evil. However, the setting is resolutely elementary school America despite the Gaelic connection. You’ll be reminded initially of Parker and Stone’s marionette farce Team America in the absurdly catchy theme tune. Bombastic and stylistically similar it’s only a few swearwords away from being mistaken for their work.

Graphically though you’ll be reminded more of the likes of Cartman et al, only less caricatured and cruel. The character designs are a mix between patchwork quilting and Terrance and Philip, only without the flatulence and Canadian aspect. Being set in an elementary school, you won’t get any swearwords here. This makes Cardpocalypse suitable for younger players, though perhaps as a spectator to start with until they’re familiar with the mechanics. 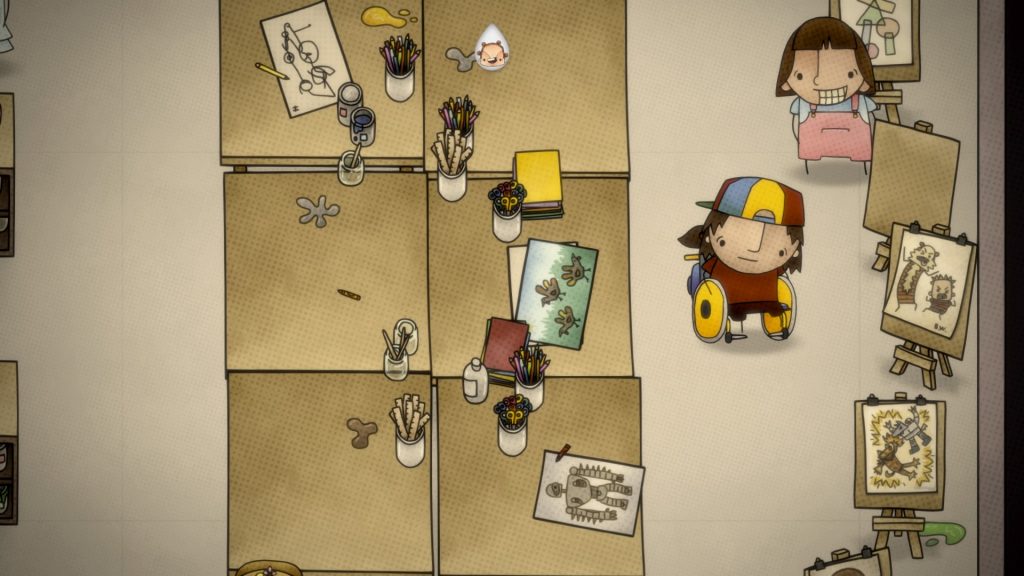 As the title might suggest, what we have here is a card battler. The in-game fiction has you playing as newly transferred student Jess. Eager to make friends, she gravitates to the rest of the children in her immediate vicinity on the school bus. Jess soon discovers to her delight that her favourite collectible card game is as popular here as anywhere else. ‘Mega Mutant Power Pets’ being the game in question. While it is tolerated by the school authorities, an incident involving the school bully leads to it swiftly being banned.

Jess being the new kid, is blamed by all and sundry for the ban, though kids being kids they keep playing anyway.  Your cards are confiscated by the school principal at least. Practically this has the effect of having all your powers stripped. Very similar to at the start of a Metroidvania game such as 360 classic Shadow Complex. Or dare we say, Super Metroid. You’re down to base level starter packs for each of the four deck types until you unlock more cards. 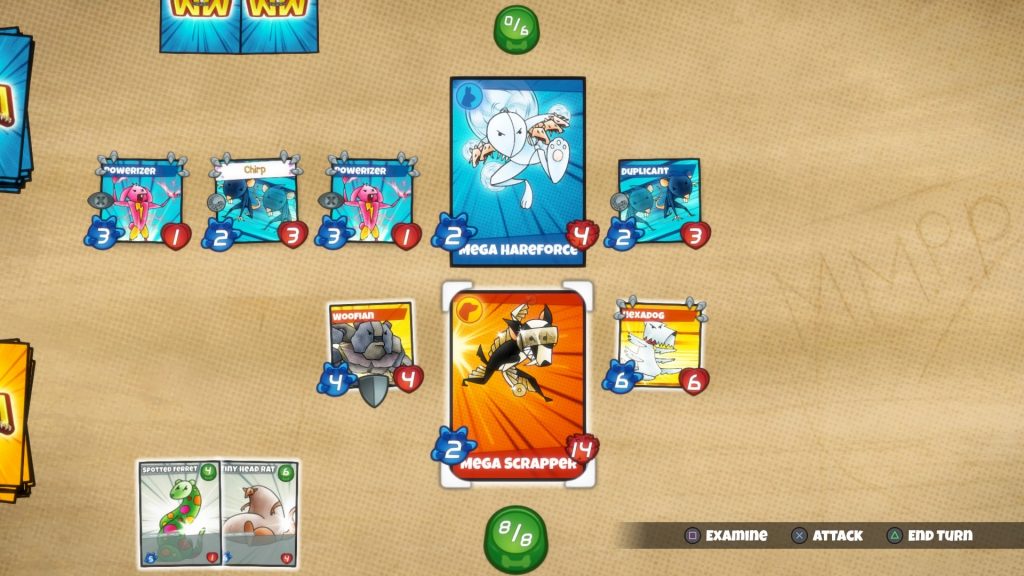 The four deck types are snake, dog, cat and rabbit. They’re given funkier names than that admittedly, but the themes run through the card designs. Stylistically the designs are more Pokémon than Hearthstone, but that belies the occasionally fierce challenge evident here. You’ll probably win every match in the opening chapter without much trouble, your only defeat likely to be one you’re encouraged to throw. The fact there’s an associated trophy helps in that regard anyway. However, come the second chapter when you’re reduced to starter cards, you’ll do well to win matches at all. That’s not to say the challenge is insurmountable because it definitely isn’t. You’ll soon realise that doing the ancillary side quests is the smart move as you’re soon furnished with lots of cards to augment your decks. 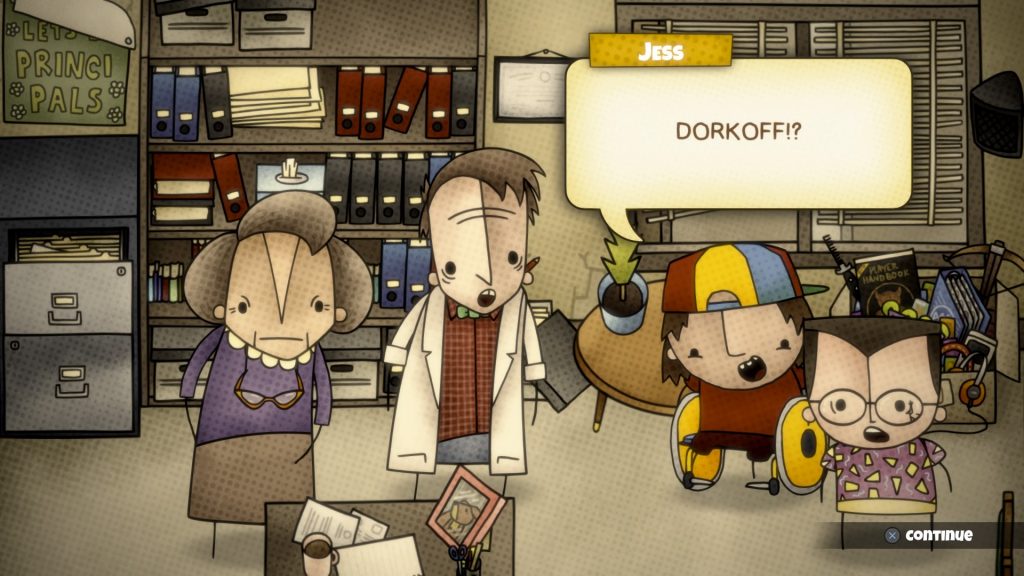 Every so often you’ll face a deck build you’ll lose to through no other reason than attrition. One in particular being a snake deck with lots of poison defenders. Coupled with your one turn cooldown upon playing a card, you’ll find your minions are taken out before you’re even able to use them. In the early game at least, there’s no discernible counter to this strategy. We found the best approach to facing this deck type was to destroy these poison cards before their numbers become too many. As in the best virtual card games such as Hearthstone, you’ll soon get a definite feel for how to build a balanced deck. Rather than populating your deck with heavy hitters, you’ll need to include smaller and defensive cards too. Otherwise you could find yourself starting a match with no minions on hand due to bad deck building. 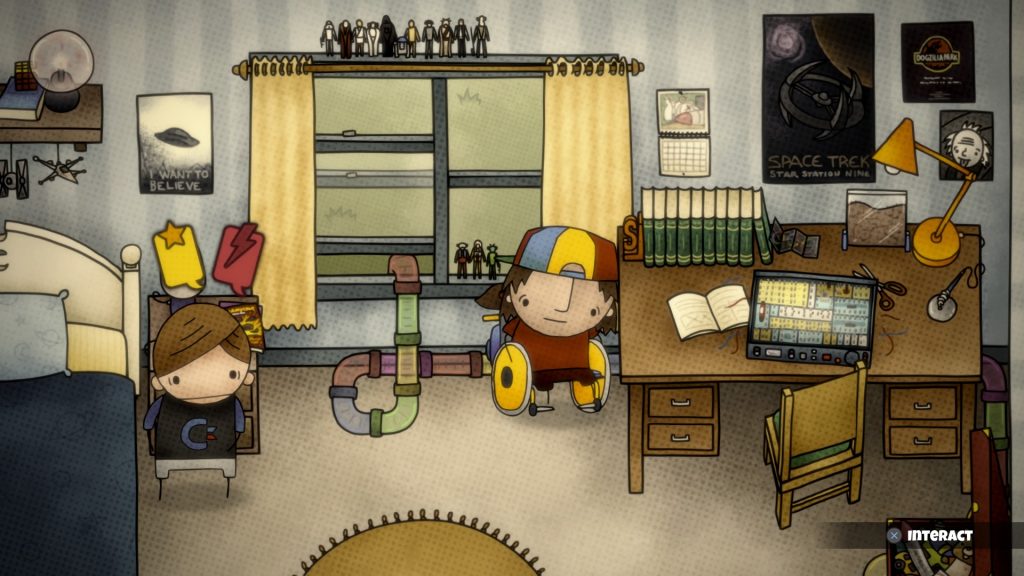 Every so often you’ll face an opponent that will beat you, seemingly without really trying. Our first real instance occurred in the fourth chapter when you’re playing an older kid. However well-built your deck, you’ll lose. Though we should have been tipped off by the fact the quest description read ‘play a game with…” rather than to beat them. This breaks the veneer a little in terms of this being a game of skill. In this instance every good move we played was cancelled out until we found ourselves hopelessly outgunned.

Cardpocalypse starts you off fairly easily in terms of the side quests that flesh out the story here. However, by the time you reach the later stages you’ll find your map screen is chock full of objectives. You could just stick to the main story beats, but you’d be missing out on some of the better cards by doing so. You’ll also be running the risk of leaving your decks underpowered. During your playthrough you’ll unlock a new champion for you to use in your decks. These are accompanied by a short cutscene with a daft song. If you listen carefully you’ll hear the dulcet tones of what we take to be the developer. That little nuance adds something a mass-market AAA title simply wouldn’t have. 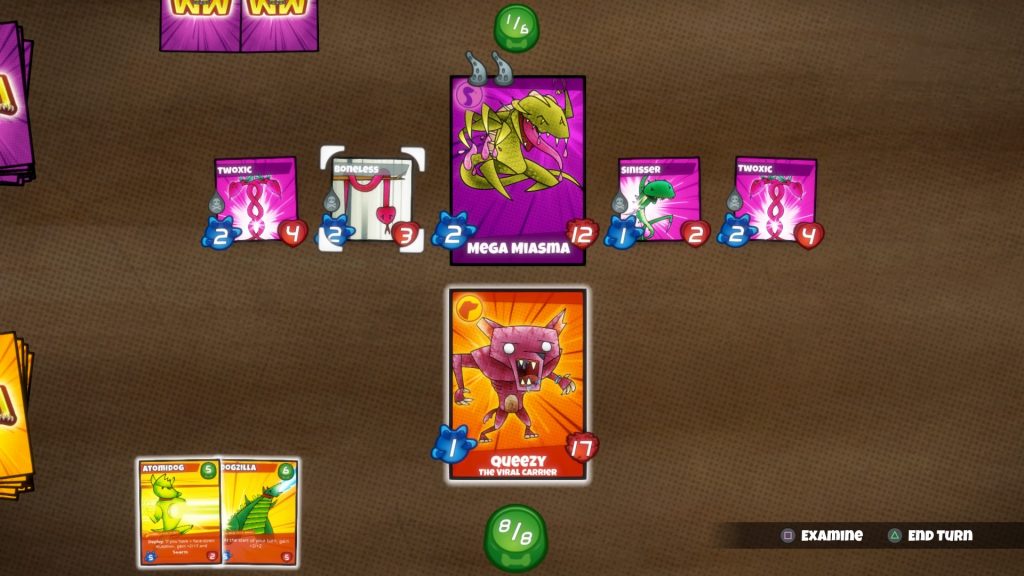 In addition to unlocking cards, you’ll be able to amend the stats on cards by adding stickers to them. As well as health and defence boosts you’ll be able to infer stat changes to alter the behaviours of cards too. For example the ability to attack as soon as you play a card as opposed to having to wait a turn. The story is fun enough but soon transcends from being an intriguing mystery to outright silliness. It doesn’t matter though as you’ll have a lot of fun doing so. At the end of each school day you’ll have to make a choice as to which friend you want to hang out with. We assume this has some bearing on your overall friendship with the respective kid, but in the absence of anything to indicate this we’re left guessing.

In conclusion, Cardpocalypse is an excellent card battler with few flaws that is well worth playing. Just the thing for a bleak winter’s evening while battling flu. OK, a bit specific but it’s where we’re at about now. It’s such a good card battler that we found ourselves thinking about it while not playing. Oh for a Vita version. Finally, it’s a mark of a game that has got under our skin when we are hesitant to post a review in case we’ve missed anything. Cardpocalypse is ace.

Cons
- Second chapter could be seen as too difficult
- Facing some deck types can prove frustrating
- If the game decides you're going to lose, you'd just as well not bother
- Friendship level with individual kids hard to figure out
Summary
Cardpocalypse is an excellent card battler suitable for all ages. Think of it as a non-sweary South Park crossed with Hearthstone and you'd be part of the way there. Very much recommended.