Neversong first came to our attention by way of a Playstation blog article the day before it was released, so apologies if we appear a little tardy. Regardless, what we have here is a game with feelings. To paraphrase the disclaimer at the beginning, Neversong is a moving story of loss and hope.

Originally known as Coma and authored in Flash, Neversong was developed by Atmos Games (aka solo dev Thomas Brush) in conjunction with Colorado-based Serenity Forge. Before it reached its final name, Neversong was also known as Once Upon A Coma. Perhaps something of a relic from originally being released on Steam, there’s a splash screen saying ‘A controller is highly recommended for the best experience’. It’s a little odd, but then Neversong is odd in the best way. 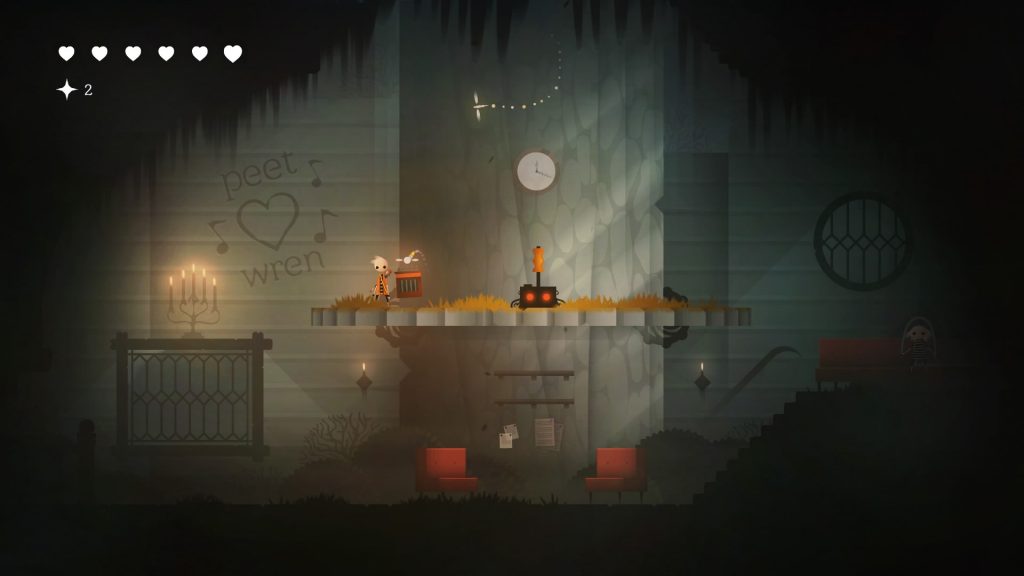 You play as small boy Peet trying to come to terms with waking from a coma after an accident. The art style and audio conjure the uneasy bad dream state very well. Not an outright nightmare, though some of the depictions are certainly disturbing. Adults in particular aren’t friendly in the slightest, more slashy freaks that try to stab you.

The six distinct locations you’ll explore throughout your adventure are populated by local kids, with the enemies generally being the deranged adults we mentioned earlier. You initially wake up on the floor of the abandoned local asylum and after a basic puzzle, you’ll find yourself in the house of your sweetheart Wren. Only she’s nowhere to be seen.

After making your way outside, you’ll see Wren whisked away by a sinister apparition. This turns out to be the main antagonist of the piece, though for your sake we’ll omit any specific details beyond the fact he’s a baaad man. At the very least, the representation of a malevolent manifestation. 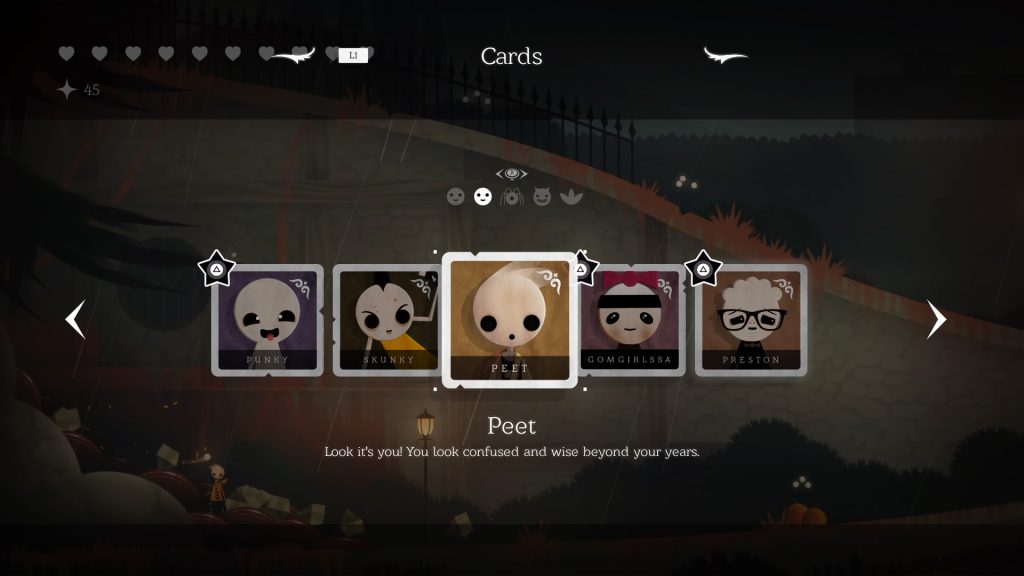 Your first level, such as it is, is down in the catacombs of critter infested earthworks. It brings to mind the opening area of Hollow Knight a little in terms of the darkness and insects therein. You’ll eventually discover that the serpent-like beast that lurks beneath is the mother of one of your erstwhile playmates. Soon things take an even stranger turn, but cleverly the manner in which they do so make you genuinely think about your actions.

Subsequent levels are in a sinister graveyard, another in the grounds of the local power plant and another in the asylum itself. Each of these aren’t quite as simple as go here, kill that, collect this. Instead, you’ll have prerequisites to fulfil before confronting one of the four bosses.

Pivotal to your relationship with Wren is a shared love of music, this is embodied in her teaching you tunes on the piano. These unlock side rooms in her house that have items to progress your quest. You’ll get new tunes (and hence new items) from bosses as you make your way through the game. 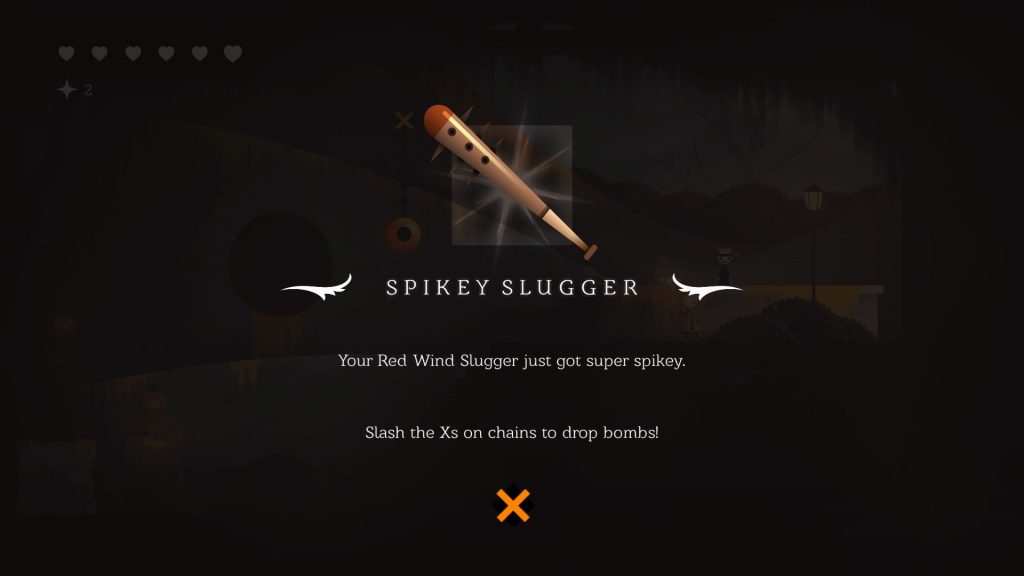 Your first weapon unlocked by the piano is a baseball bat that allows you to dispatch enemies with gusto, you’ll soon be able to embellish it with nails to give you a nice spiked implement. We hesitate to say it, but areas are gated in a Metroidvania fashion, though only in terms of your being unable to reach certain areas without the correct tool. Neversong feels different to us though as it’s much more puzzle based.

There’s a trophy on offer for tearing through the game in an hour, but to be honest we found we enjoyed a somewhat more leisurely stroll as we progressed. For a start, taking our time allowed us to boost our health a little by killing extra mobs. One hundred crystals yield an extra heart, some enemies giving more crystals than others. Given some of the platforming required, you’ll have to be nailing jumps perfectly to even get close to an hour. 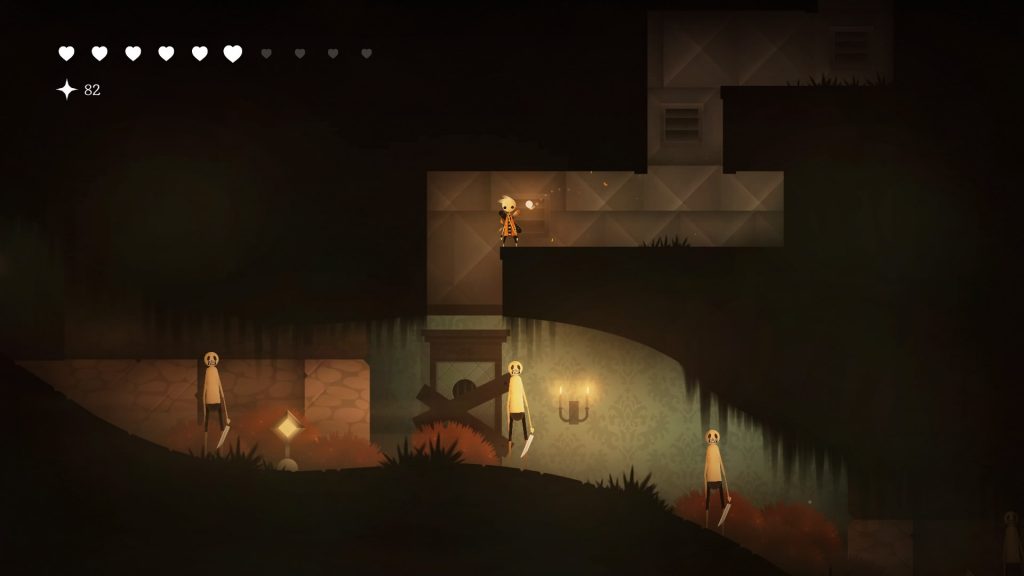 The trophy for not dying seems doable, but another for not taking a single hit all game makes us wonder if we’re playing Neversong correct at all. Some encounters against multiple enemies are challenging enough, let alone not taking a hit. It isn’t like you have a ranged attack, more you’ll have to carefully kite enemies one by one.

There are collectibles in the crystals we already mentioned and entertainingly, collectible cards which fill out the lore a little as well as providing you with cosmetic items. There’s another trophy for collecting all these coma cards, but to be honest it’s best left to mop up on the second playthrough. 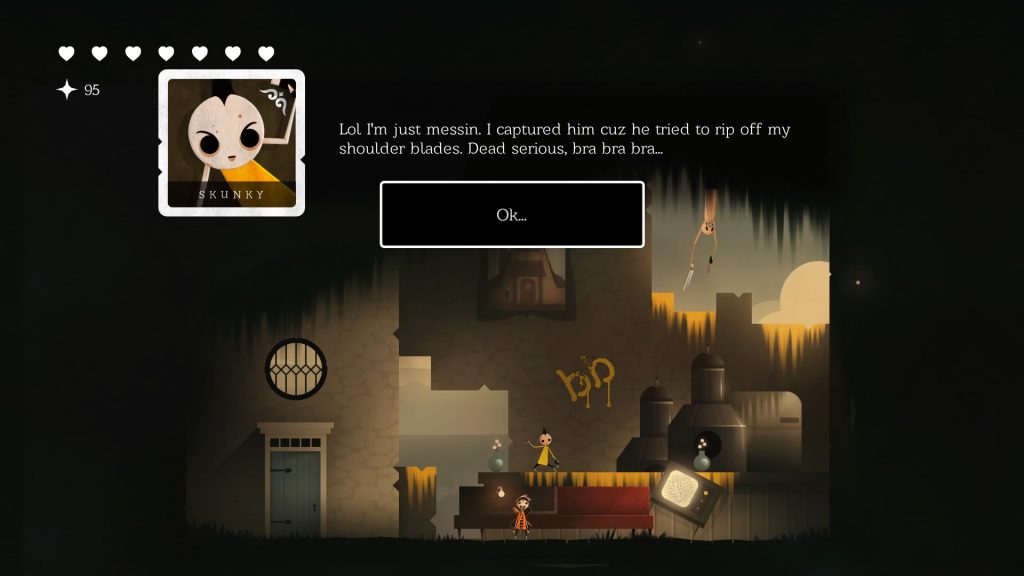 Having figured out the puzzles the first time, you can prevail a little easier, though you’ll still do well to finish Neversong in two hours, let alone one.  It’s not all great though. Perhaps our base model PS4 was at fault, but the transition from one area to another can occasionally be a little on the glacial side. Not quite make a cup of tea and come back in five minutes, but an appreciable delay.

You might feel Neversong is a little on the brief side, but we feel it’s just about the right length. That man Shaun Layden has a point in terms of not everything needing to be an epic quest. In conclusion, Neversong is a delight that you might like to play when the kids are tucked up in bed, lest it lead to some awkward questions or nightmares…