Tower Defence is not my thing but Ace Team’s Rock of Ages series does carry a daft Monty Python-esque sense of humour. Couple that with a level editor and you have me intrigued. For the third iteration, Rock of Ages 3: Make & Break, they’ve combined a lengthy campaign with some community creation tools in the hope of giving this series a boost in momentum. 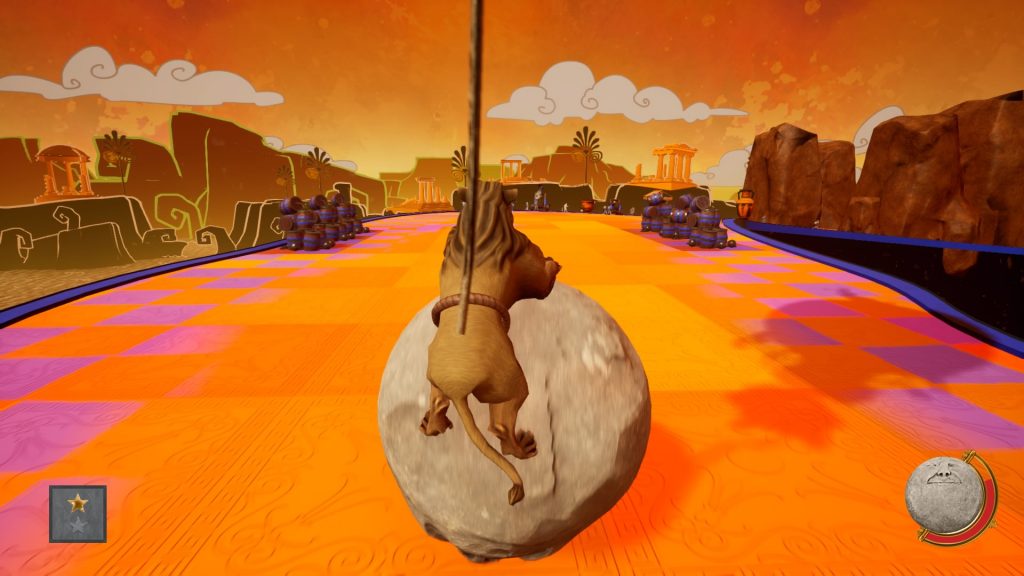 The story takes a familiar structure. The titular Rock of Ages begins Ancient Greece. It’s much coveted but Elpanor has the sentient boulder in his possession. From there, you’ll travel forwards through time conquering many civilisations. It’s kept fairly light and serves as an introduction to each empire, but the cutscenes provide some humour before getting into building and destroying.

The presentation remains very charming. The Monty Python cut-out aesthetic results in some daft visuals. It’s not voiced so the humour tends to come from a place of slapstick. It raises a chuckle and it’s creates an impressive look. The gameplay looks equally light-hearted. The levels have a diorama feel with people being rendered paper-thin. It’s consistent in tone and every unit has a cheeky feel to them.

Mission areas replicate their respective eras pretty well. Roman vases, Chinese firecrackers and so forth make an effort to give the scenery a period-appropriate look. The soundtrack is well done with a classical, chirpy score. It all takes on the feel of a jaunty glance through the history books. 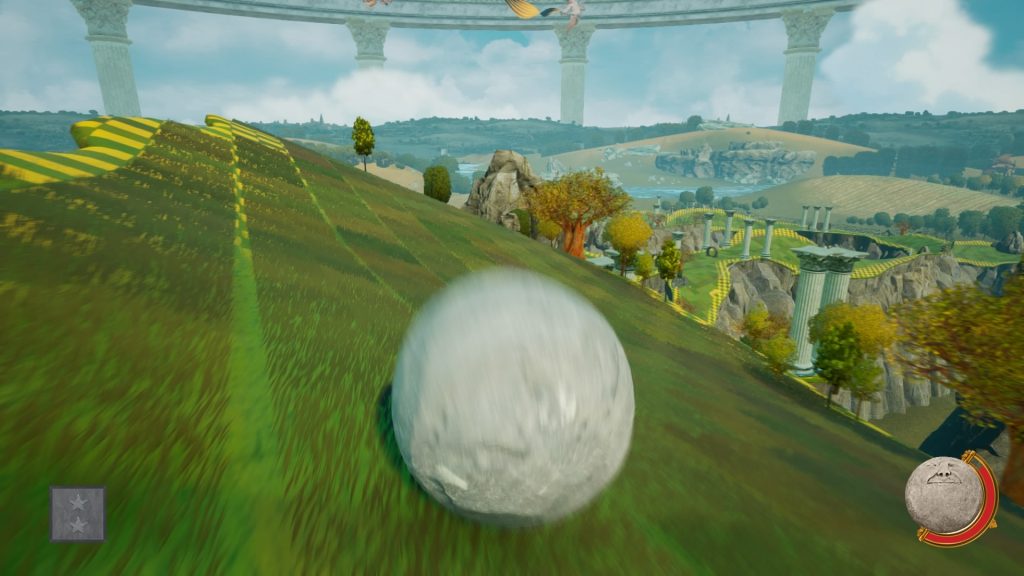 Each era comes with a handful of missions. There’s a decent balance struck between destruction and tower defence. Obstacle courses and time attacks allow you to roll your boulder down a carefully constructed course. The boulder controls feel great and the physics involved are fairly consistent. You have a jump that the AI seems to neglect but you can use it to create potential shortcuts and avoid obstacles. These events come with plenty of trial and error and it can frustrate. With a little bit of foresight and practice these can easily be beaten. The challenge comes, especially with time trials, with finding ways to shave seconds off your time.

The standard tower defence is fairly simple to grasp. You’re given plenty of time to place obstacles on the field and they’re fairly varied in their effectiveness. Hulking elephants and bulls provide opportunities to divert the opposition off course. Wandering idiots can obscure their view and projectiles can hammer an opposing ball. Your objective in this phase is to stop the charge to your castle gate. Slowing them down is crucial but destroying their arsenal gives you essentially free range to damage theirs. 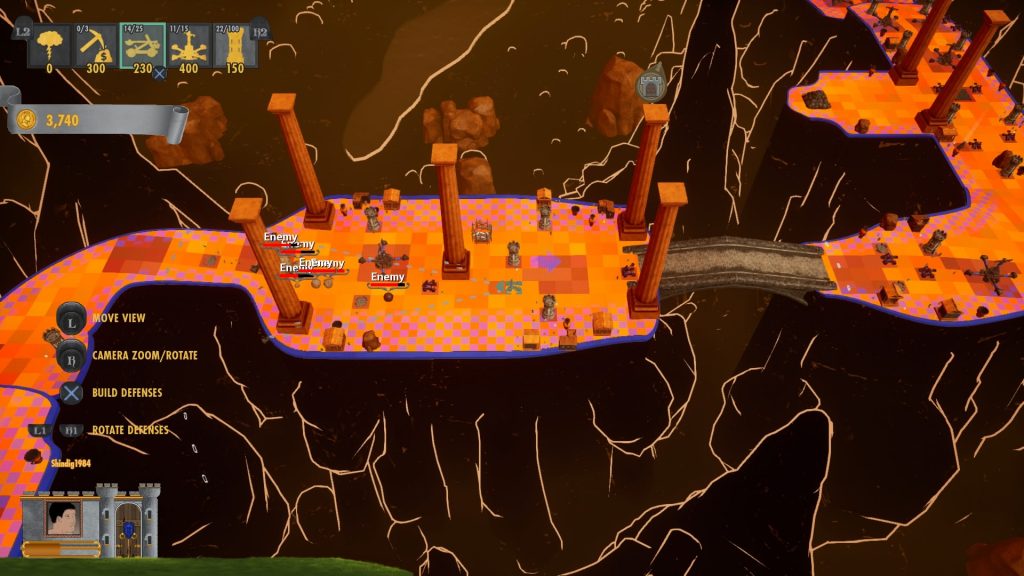 It’s tactical although my approach has been fairly scattered. The AI feels equally unpredictable but some of that could be down to luck. I find the boulder phase for each player starts at the same time. As soon as the situation allows it, I’m sending my rock their way. Whilst rolling, you’re kept update on the enemy’ progress. It’s not too distracting and it does allow you to see what obstacles are doing their job.

The story mode is a lengthy campaign but the mission types aren’t that varied. Stars unlock newer levels and that results in replaying old missions to progress. This leads to repetition and I honestly find this grind frustrating. Time trials become an exercise in execution whilst the tower defence can sometimes boil down to luck or out-gunning your opponent. It never really gains any momentum as you revisit old locales to tick boxes.

The other side of the coin is Rock of Ages 3: Make or Break‘s creation tools. If the campaign levels begin to feel a little stale, you can create your own or glance through the many community creations. The level editor does feature a tutorial to take you through the basics. I find the controls to be clumsy but there’s been plenty of interesting creations so far. It’s something to persist with if the campaign grinds you into submission. 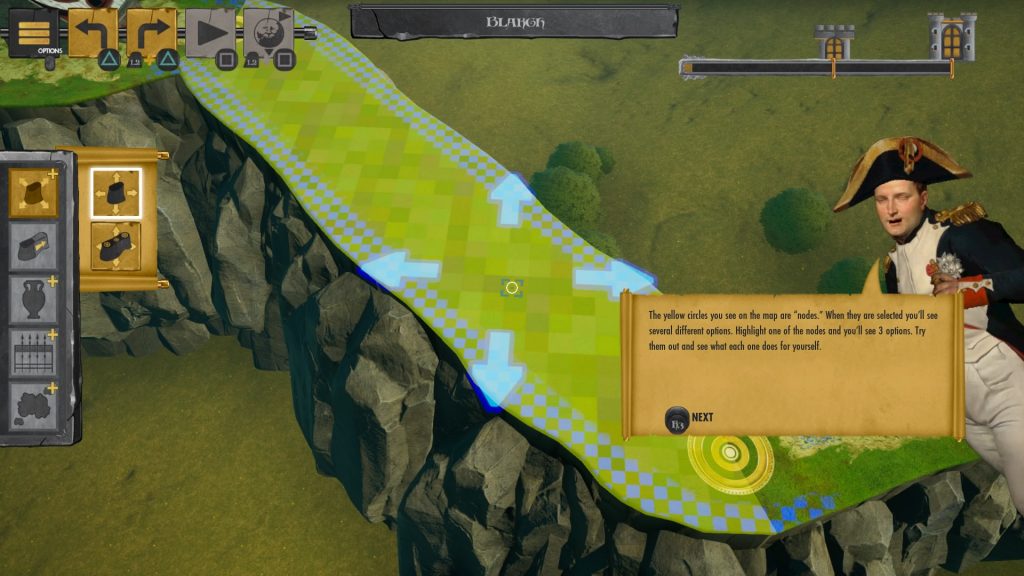 What the community has come up with in this early stage is neat. It should help lengthen the tail of a game that already displays some decent co-op and competitive multiplayer. The campaign missions are also there so, should you want to practice those without dealing with replaying cutscenes, you can do so here.

Whilst I do feel the campaign to be frustrating, there’s plenty of content elsewhere to keep people occupied. The level editor allows for some creativity whilst giving you something else to sink your time into. The humour is silly and welcome, with a cheery aesthetic. It’s nothing new to the series but the look does feel comfy. I just wish the campaign had a better flow and more variety to it.

Rock of Ages 3: Make & Break
6 Overall
Pros
+ Daft, slapstick humour.
+ Well presented with some great art and soundtrack.
+ Robust creation tools that the community are already into.
+ Multiplayer works well and shows Rock of Ages' gameplay at its best.
Cons
- The campaign is slim on event types and repetitive.
- Enemy AI can be unpredictable and inconsistent.
- Getting into events isn't as snappy as it could be.
- The level editor can feel clumsy to navigate on a controller.
Summary
Rock of Ages 3: Make & Break manages to add some creativity to the familiar framework. Unfortunately a frustrating, repetitive campaign stifles any real sense of progression. The level editor can feel cumbersome but persistence can lead to some interesting creations. Multiplayer and the community levels deliver the more intriguing content but that might not be enough to keep fans invested.