PSN has been host to a few 2D airplane shoot ’em ups, most notably Luftrausers which was a good retro-flavoured affair and the brilliant Rogue Aces, which we still rate as one of the most exciting shoot ’em ups on the system.  Aircraft Evolution, from Satur Games and ported by Russian coding crew Sometimes You, follows in the same vein as these other games by offering you some 2D aeronautical action where you fly the unfriendly skies, blasting your way through enemy aircraft while dropping bombs on their comrades below.

The gimmick here is that this game takes you through four eras of combat, starting out with biplanes blowing the hell out of ground troops before introducing newer planes, more advanced enemies and targets from early WW1 days all the way through to futuristic armies.  Think Time Pilot but more playable. 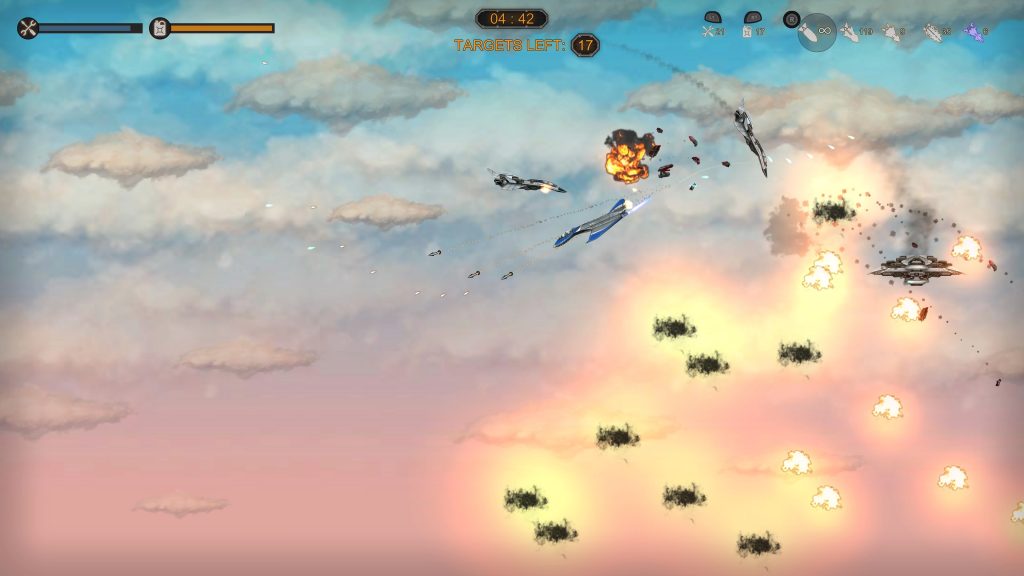 The basic controls are fiddly at first, not unusual in this sub-genre of shooting games.  You control your movement with the left stick but in a slightly clumsy rotational way.  You can hold a direction though and this will level out your plane in that angle and once you realise that, things get easier.  You also shoot your initially weedy guns with the

button while dropping bombs with

is used for a speed boost while

uses a repair kit you a complete health boost.

Aircraft Evolution has forty levels, the first two of which act as a tutorial of sorts.  Once you’ve figured out the basics of flying, shooting and bombing you are then free to attack the rest of the game.  From this point on each level is a fairly short scrolling area where you move across the play area.  You can’t scroll the screen up and this keeps the action fairly concentrated.  Each level will give you a task, generally killing everyone or blowing up every building.

Progress isn’t too slow early on but you’ll hit a few roadblocks (figuratively speaking) and so you’ll need to buy upgrades to your plane.  You can make it stronger, faster and more destructive and this will help you get through any tricky stages.  You earn credits as you play, even if you fail a level, and so you can, if needed, brute force your way through the game.  However, after a while we found that a good plane (you can buy new ones as you go along) and a stock of decent bombs was enough for us to blaze through the game in one sitting. 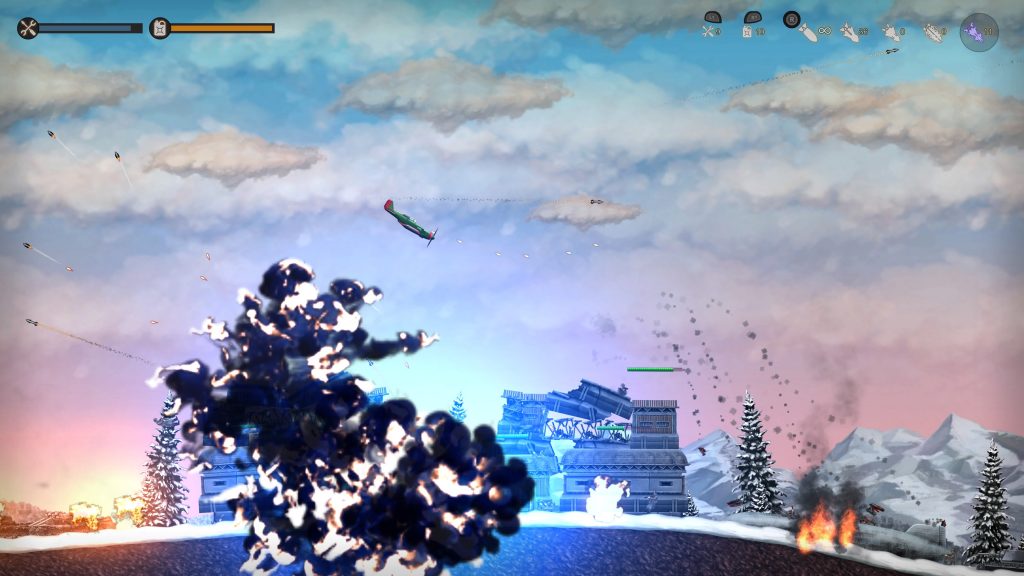 Decent bombs?  Yep, flicking your right stick will switch your bombs from normal ones to cluster bombs (think Worms), heavy bombs, napalm bombs and some super ones that light up targets in destructive blue flame.  You have finite stocks of these but supplies can be found floating through the sky or you can just spend your credits on more of them.  Occasionally you’ll run into a bonus level which will give these away like confetti.

Beyond that, there’s not much else to say about the mechanics of the game.  Despite its short length and lack of variety, this is a really enjoyable game to play.  You do eventually get used to controls and you’ll soon be skimming targets and blowing up major targets like a pro.  A selection of difficulty settings can help you add some resistance to the game if you don’t want to finish it too quickly also.

The main thing though is the action and Aircraft Evolution does deliver.  It takes a while because the first few levels are pretty staid but eventually you’ll be strafing multiple targets and smashing that bombing button until everything is dead.  It’s not subtle but it is exciting and fun. 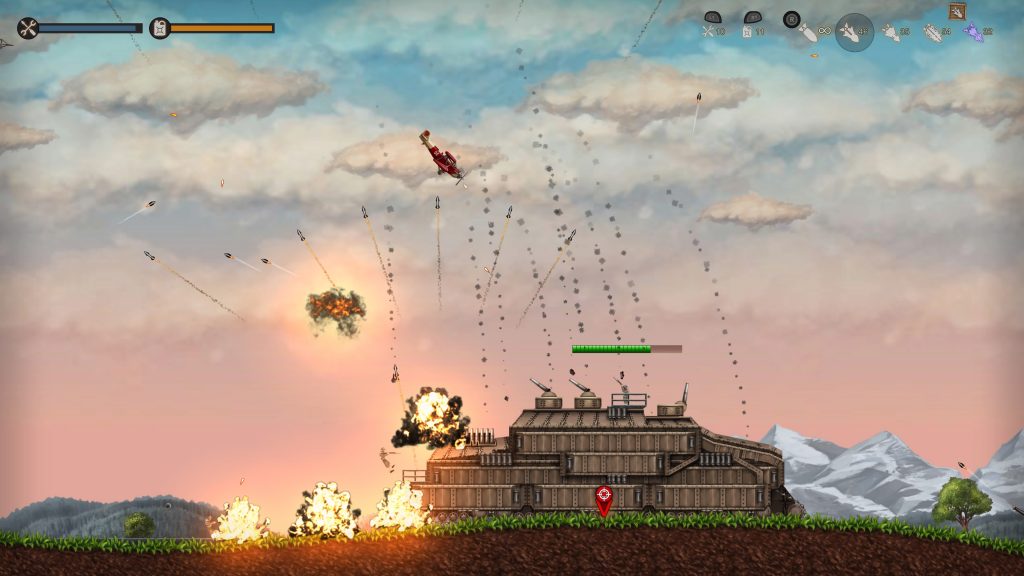 The presentation is fairly basic.  The flat aircraft graphics and modular enemy fixtures make the game feel like a mobile port at times but some of the lighting effects and just the sheer amount of action that can happen at any given time do help it fit in on a modern console a little better.  Initially you may struggle to see enemy fire, the bullets are tiny and on a 4K telly across the room, we found it to be a bit of a pain trying to pick out those little pixels of doom.  Thankfully, your aircraft can take quite a bit of damage so this isn’t a huge problem.

One real issue is the menu which is terribly designed.  Highlighted options show up in a very slightly brighter colour to the rest of them, making it almost impossible to navigate easily.  You can eventually get where you need to but initially it feels like it was designed for a mouse and it remains a constant chore to use.  Basic playtesting would have picked this up which makes this feel like a quick and dirty port job rather than something re-optimised for the console.

Sticking with presentation, the sound effects are a little bit plain and tinny at times but they do a good enough job of complementing the action but there’s no voice commentary and the music is pretty muted and uninspiring. 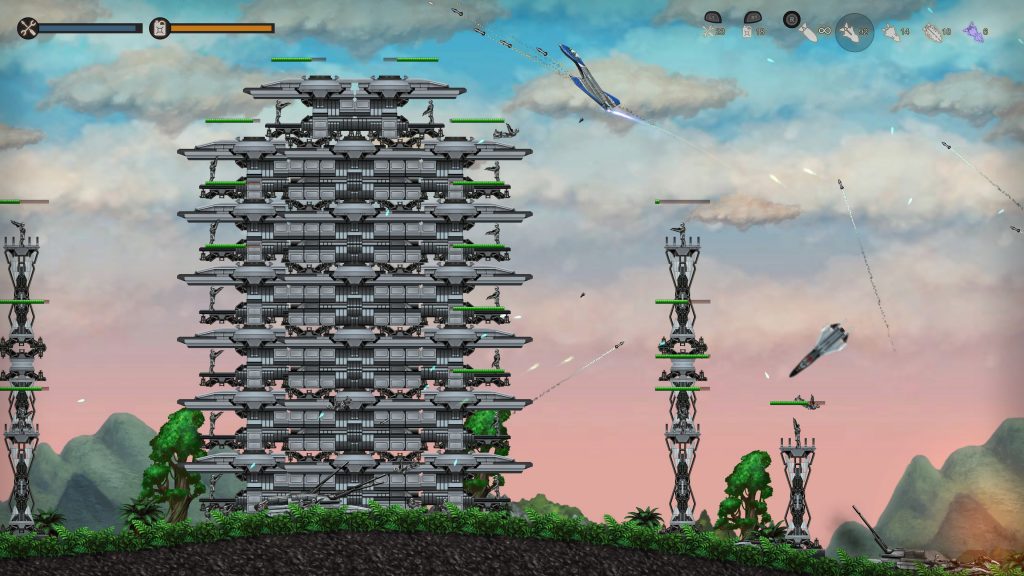 Aircraft Evolution stands up as a decent indie cheapy that shoot ’em up fans can have some good, casual fun with.  The only real problem the game has is that, at £7.99, it’s only a couple of quid cheaper than Rogue Aces which has better presentation, more compelling action and more variety but if you’re needing a shoot ’em up fix, this is worth a look.  If value matters to you, definitely pop the game onto hard difficulty (very hard is a bit too much) and crack on.

So while it might not be the best shooter on PSN, Aircraft Evolution represents an evening, or two, of cheap fun.  If you see it in a PSN sale, it’ll be an easier sell but at this reasonably cheap price, it’s not hard to recommend this game to anyone looking to blast the hell out of some pixelated pricks.

Aircraft Evolution
6 Overall
Pros
+ Strafing runs are pretty enjoyable
+ Managing upgrades and bomb inventory is handled well
+ The different eras of combat gimmick is well conceived
+ Very playable
+ Later levels improve the game
Cons
- Dreadful menu system
- A bit short
- Doesn't have much variety
- Basic presentation
- Upgrades outpace the game's difficulty
Summary
Aircraft Evolution is a fun, arcadey shoot 'em up with a nice gimmick and some decent playability but it's also quite short and maybe a bit too easy. The cheap price means it is a fairly safe bet for shoot 'em fans looking for something a little different to play for an evening or two.