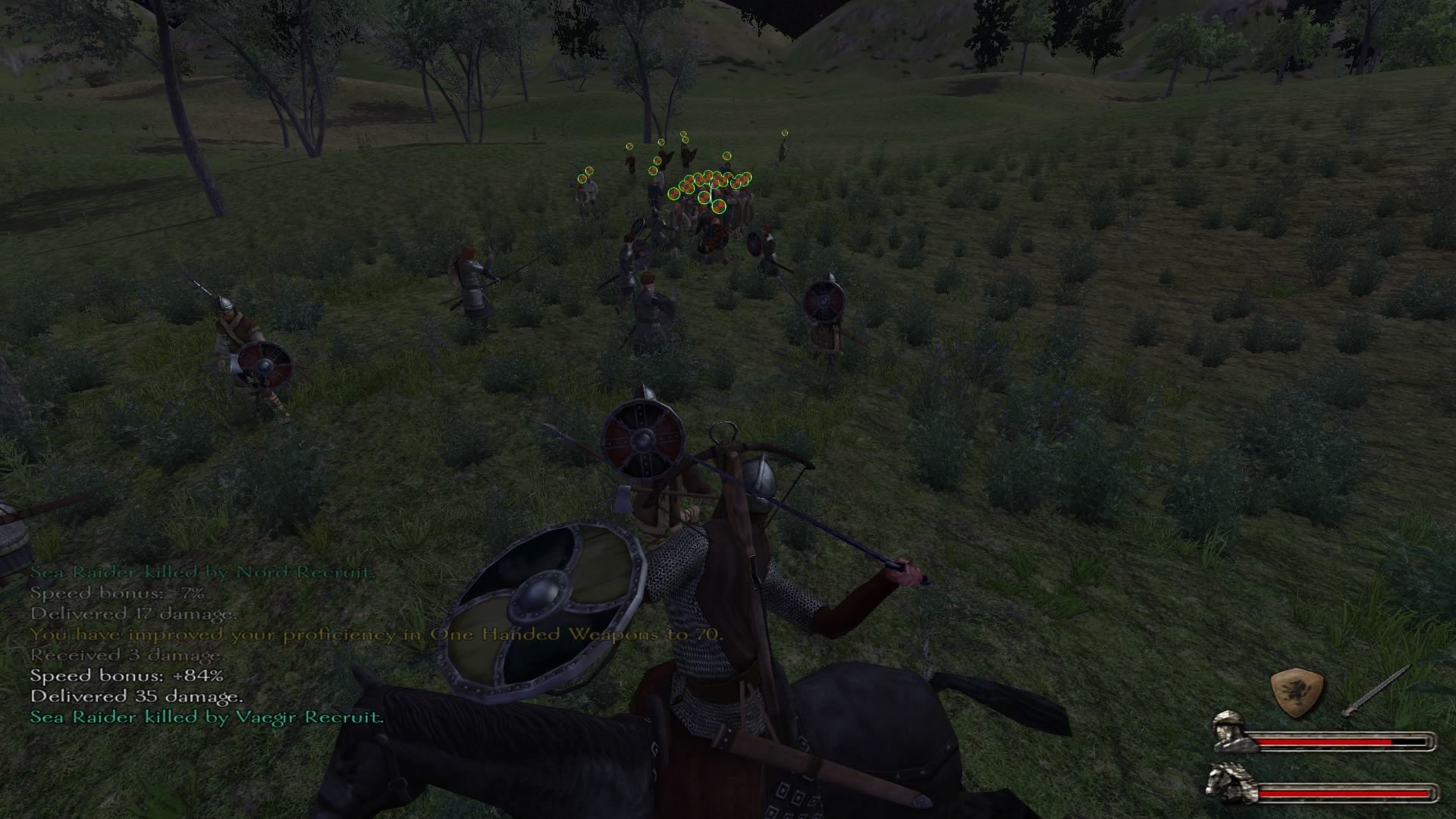 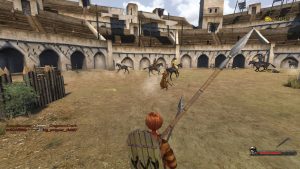 Let’s get the obvious out the way. Mount & Blade is an old game. Originally released on the PC back in 2007 to middling to positive reviews owing to an intriguing combat system and somewhat shaky production values. Warband was an expansion pack to the original game and included a bevy of added features, including multiplayer for up to 32 players and an updated map for single player.

The main draw and focus for the game is in its combat. Instead of happily mashing buttons to animate your character you are forced to take a slower and more deliberate approach. To swing your sword/axe/polearm in a particular direction you have to tap right stick in that direction before hitting the right trigger to execute the attack. The same goes for blocking, depending on which weapon your are holding and if you are skilful enough you can deflect and parry incoming attacks, either opening up your opponent for a riposte or to completely mitigate a fatal swing. Other factors come into play that make this system all the more complex. Momentum, weapon quality and position plays into this in a big way. For example if you see a mounted enemy approaching at full pelt then you can swipe away at the horse’s legs to take it out of action, this would not be as effective as it would be if you stood next to it and chipped away. 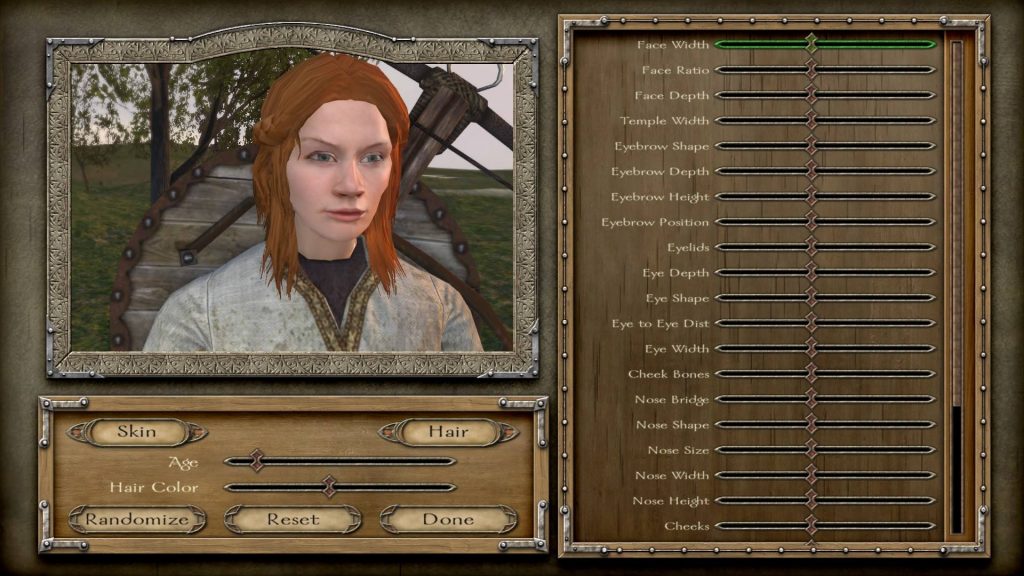 This is a fantastic system on paper and really sets Mount & Blade apart from other games that feature Medieval combat however there is one big caveat. The right trigger is also your camera stick. Often during battles you will find yourself wrestling with the camera while you try to wind up a killing blow, which is definitely not ideal when the very concept relies on accuracy and timing. There were countless times when I was riding up to enemies on horseback, spear in hand only to realise that due to my camera position I either could not see the enemy any more or the wrong direction for the attack was registered thanks to minor adjustments. There are options to change the way that attacks are picked however these do little to change the overall feeling, It just never feels intuitive enough for the controller and that is a big shame.

There is a surprising amount of content other than combat to sink your teeth into. The single player mode is a sprawling RPG with a lot of freedom for you to create a character and grow. The plot is the only lacking part. You play an adventurer of your choosing, there are wars going all over the land, you can choose to either fight in them, command an army to do it for you or you could just play the lone adventurer just going as they please. An intriguing aspect to this is the way in which difficulty is chosen. If you pick yourself to be a peasant born then you can realistically expect to start with incredibly awful equipment and poor standing with local communities. Start as a noble then half the work is done for you, you start with wealth and shiny armour for you and your horse and charisma in spades.

The main screen you will see in single player mode is a world map with all of the villages and castles dotted around. You can freely go to whichever one you choose to pick up supplies and recruits for your own Warband that accompany you throughout the world and most importantly in battles. Special events play out depending on the time of day and who you encounter on the world map, usually ending in a battle of some kind. This is where the real fun comes out, as you and your Warband charge headlong into a small army with swords clashing, war cries and arrows flying past your head and a ballet of chaos. Sadly combat moments like these are few and far between as you will mostly be looking into menus, walking around empty villages that feel like online lobbies with no other players in them and talking to townsfolk who more often than not don’t really have anything to say. 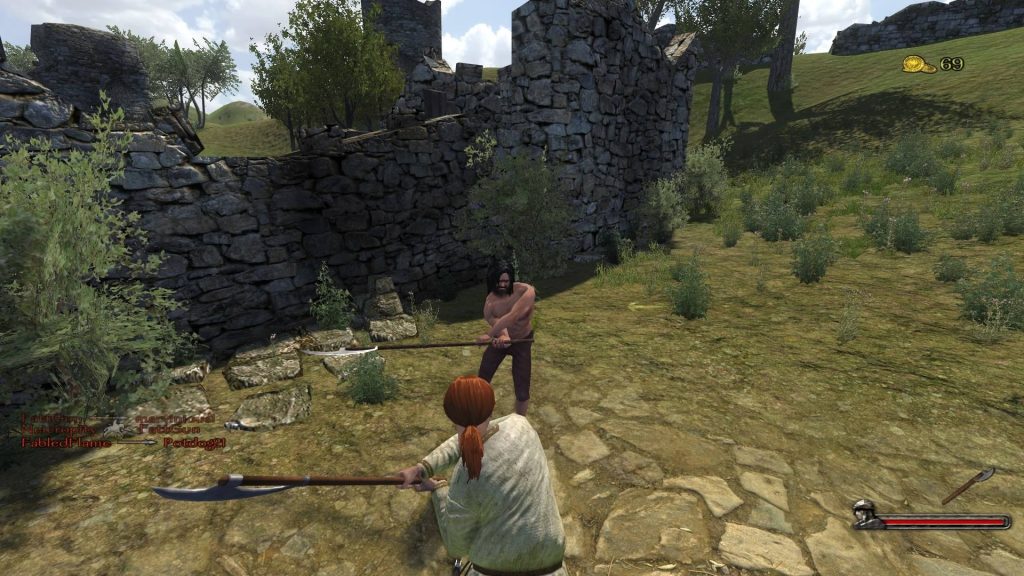 So the Single player mode is something that will not be for everyone. If you like the idea of starting a character from scratch and carving your way through quests without general direction then you may find yourself at home here. However personally I found my fun to be in the multiplayer mode. Which thankfully is also fairly well realised.

There are several modes to multiplayer including your typical deathmatch, team deathmatch and the medieval staple of siege mode. Which sees you either defending a castle or attacking the walls in a hope to claim it for your own. The directional combat works wonders here as I genuinely felt that I was not alone with the control issues, making for strangely balanced combat. Although the servers aren’t as busy as you could hope there is generally enough players in each game type to make logging on worth it, for now at least. The only major gripe I have is that there are a few maps which have achingly poor framerate thanks to water effects. These maps are some of the better ones but sadly they quickly get voted away thanks to this. 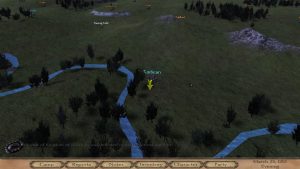 The general aesthetic of Mount & Blade is fine for what it is. Although it clearly looks like a game from 2007 that has had little in the way of improvement or polish applied since. It is functional enough that this isn’t a problem, however the animations could definitely have done with a going over. Typical Medieval settings and colour palettes apply here so don’t expect anything ground breaking.

Mount & Blade: Warband
6 Overall
Pros
+ Very involved story mode with plenty of variety to keep you going + When your weapon actually hits there is a level of satisfaction + Multiplayer can be fun
Cons
- Very dated graphically - Poorly realised directional combat system which is mounted to the camera - Inconsistent collision detection
Summary
For as old as Mount and Blade is there is something fresh about its main combat mechanic. However this does not excuse the whole package which is as old as its concept. If you are looking for a more involved hack and slasher then you may want to give this a try, however be prepared for shaky controls, poor camera angles and general rustiness that unfortunately brings the game down.