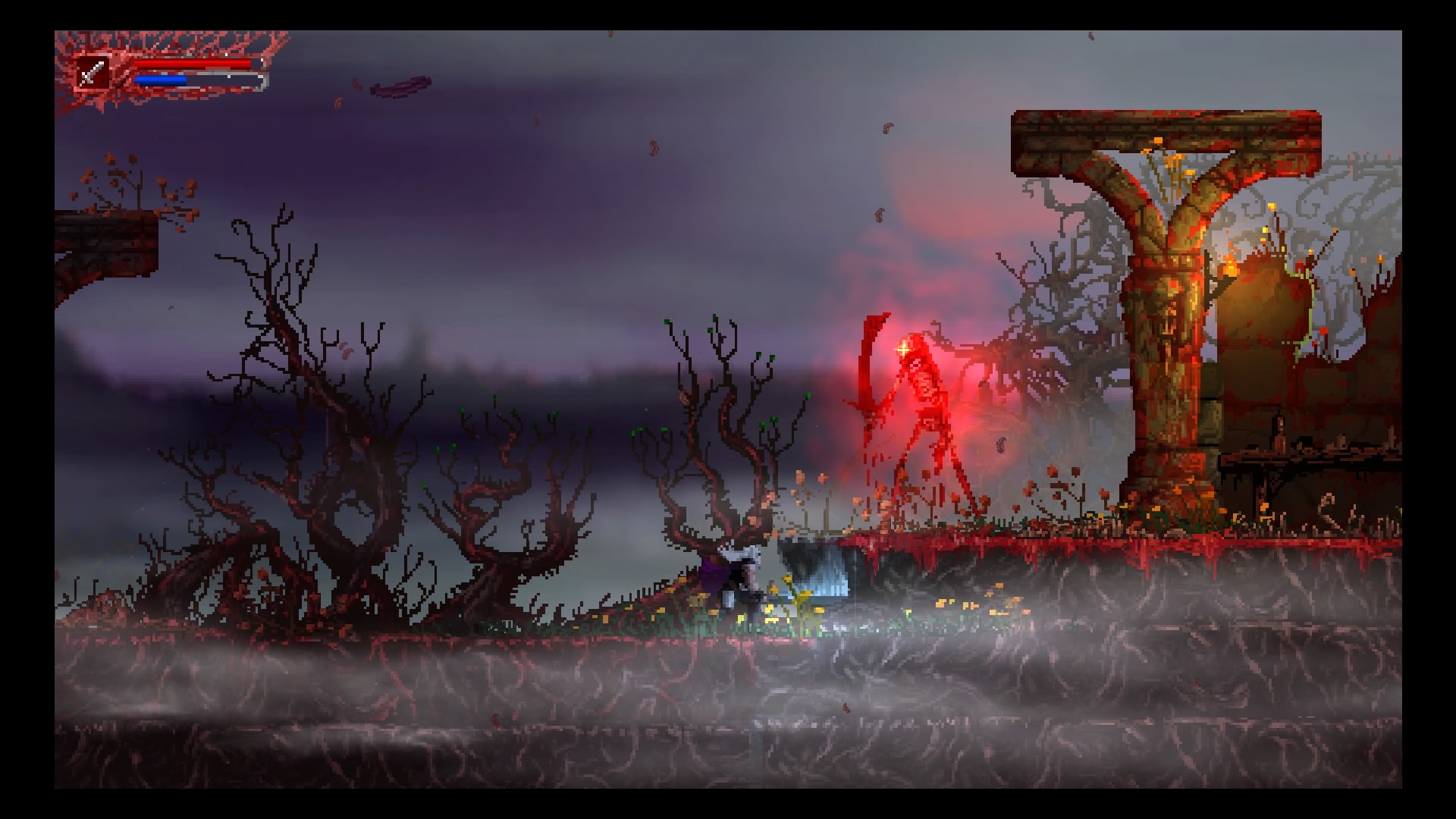 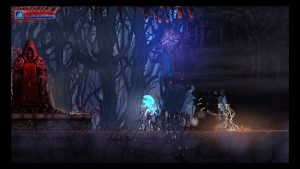 Whenever a game is a tad difficult these days, it is usually compared to Dark Souls. Well, if ever a game deserved the whole ‘it’s the 2D Dark Souls‘ description, Slain: Back From Hell might be it. It certainly has to the two main qualifying criteria. A dark, gothic look and the sort of difficulty spikes that make you shout ‘fuck!’ quite a lot.

Playing as Bathoryn who is on a mission to save various realms from the evil Lord Voll. The story plays out in conversations that are presented in text, in a quite horrible to read font, but essentially all you need to know is that your guy can run, jump and use a sword. He also has the ability to shoot bolts of magic but that is definitely secondary to the hack and slash action on offer.

Looking like Castlevania‘s little heavy metal obsessed brother, the game is a 2D mix of platforming and combat and is, for the most part, entirely linear. There’s not much exploration on offer here and there’s a good reason for that. The game is tough. Really tough. And so you don’t really need to be pissing about going down the wrong corridors. Instead, everything becomes about hitting the next checkpoint.

Enemies are everywhere. Small, large, magical, physical. And they all want to kill you. Luckily, most of them are pretty bad at fighting and love to telegraph their shots. The key to success is usually to time your block, parry them and deliver a critical hit back. It’s not too difficult to do and is actually pretty satisfying. Likewise, the platforming stuff isn’t very taxing either. What Slain does though is to chain together a few of these challenges before you hit the next checkpoint, to the point where the challenge becomes compounded. 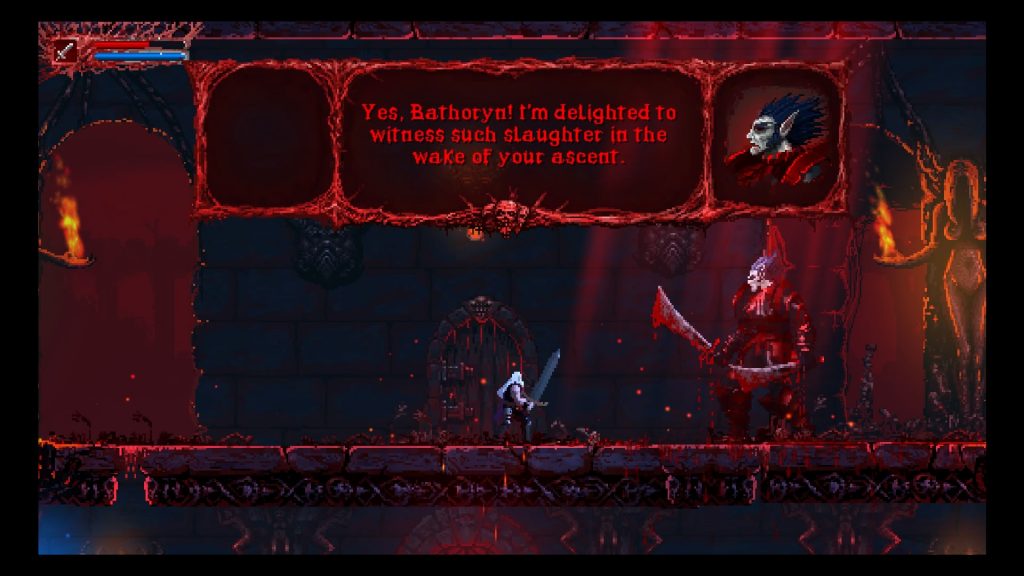 At first it doesn’t seem too bad. Sure, your first death will come quickly but you’ll soon grasp the timing of the combat. You’ll take out smaller enemies before a tougher one appears. A few attempts later and he’ll fall but then you’ll see more of those but with the smaller enemies running around, affecting your timing. The situation continues to escalate until you end up with very tough sequences where you can’t wait to see that next checkpoint.

At its best, it’s very satisfying. The game doesn’t level you up or your equipment but through experience you’ll become better at getting through each section. Sections that torment you over and over will eventually be overcome and probably overcome very well.

However, those victories really do have to be earned and the game isn’t afraid of putting in an insta-death trap just at the end of a section just to catch you out. Indeed, environmental traps are all designed to catch you out a couple of times before you start to look out for them a lot more carefully. Deaths can often feel extremely cheap but these are balanced out, mostly, by the number of checkpoints out there. Even so, it can feel outrageously unfair at times and is a cheap way to enforce the game’s brutal reputation. 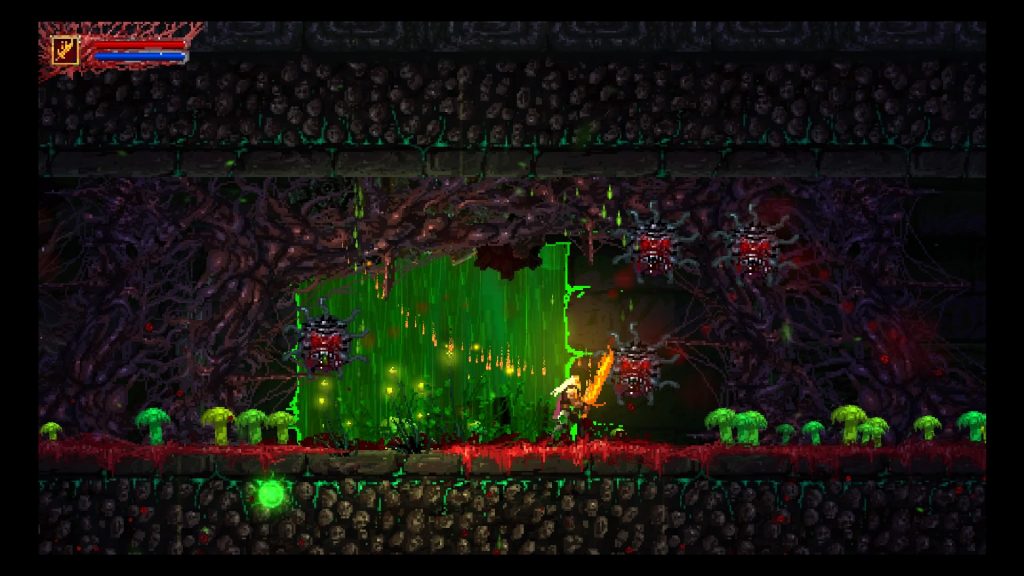 What lets things down the most is that it does all become very repetitive. The game throws in a few different looks here and there such as an interesting, if not very fun, wolf run section but mostly you’ll just be doing the same things over and over. The combat would be pretty dull if it wasn’t for the game’s difficulty and it arguably isn’t much fun but it can be very addictive. At least if you’re as stubborn as I am.

Visually, Slain is interesting. It uses a 16-bit 2D style (like every other game these days) and is actually a little ugly but the locations are actually well designed and so it’s nice to wonder what is going to be revealed further on in each level. You couldn’t say it is beautiful but it certainly is something and, in conjuction with the heavy metal musical score, Slain definitely has an interesting theme similar to the kind of skulls and flames album covers of bands with names like Saxon or whatever. It’s daft, especially when your character celebrates a big victory by banging their head, but it’s going for a certain aesthetic and it nails it. 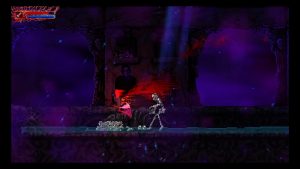 I’m not sure Slain has been fun to play but I have wanted to keep going. There’s a lot of satisfaction to be gained from each victory but the game will be ready to slap you down again before long and it can become all a bit tiring. But despite the difficulty spikes and lack of variety, Slain’s old school values work for it. I like the fact that it is linear, I like the fact that an enemy that once seemed insurmountable can later seem trivial. Slain is either very very clever or so simple that you end up doing all the hard work for it. Either way, I like it.

Slain: Back From Hell
7 Overall
Pros
+ Combat is well-designed + Gloomy, heavy metal presentation totally works + Suited to its linear level design
Cons
- Likes to slap a random death on you far too much - Platforming sections are pretty basic - Some enemy types are a proper pain in the arse - Not always fun - 16-bit visuals yet again
Summary
Slain: Back From Hell is resolutely old-school. From its 16-bit graphics, heavy metal score and the one track, balls-hard gameplay. It gives you a lot of reasons to dislike it but not many to stop playing. It may feel about as much fun as an economy class trip to purgatory but the moments of satisfaction it gives you are worth the journey.