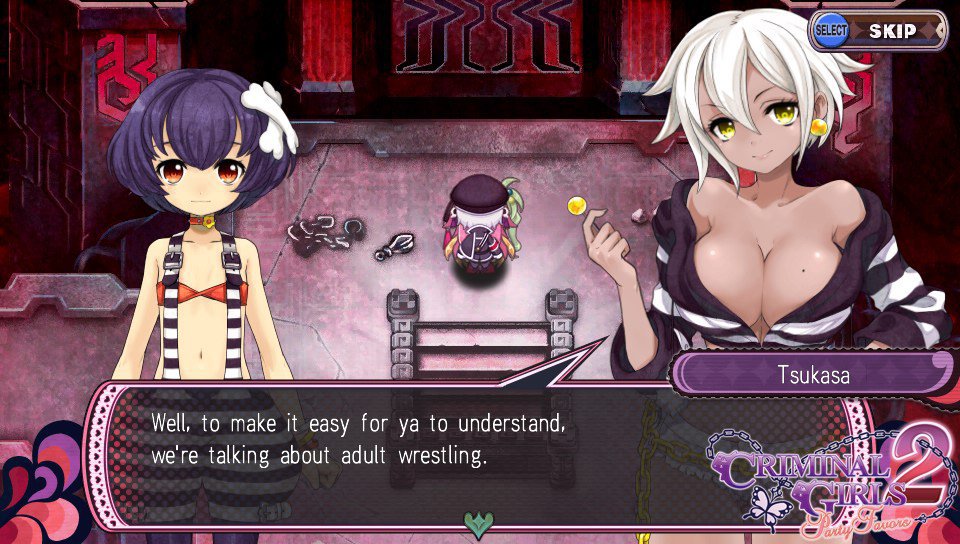 Criminal Girls 2: Party Favors is a new Nippon Ichi Software title on the Vita and the sequel to Criminal Girls: Invite Only which was itself a remake of Criminal Girls on the PSP. I never got around to playing the original and was only aware of it for its infamous ‘motivation’ scenes. They return here and, yeah, this game really is something. 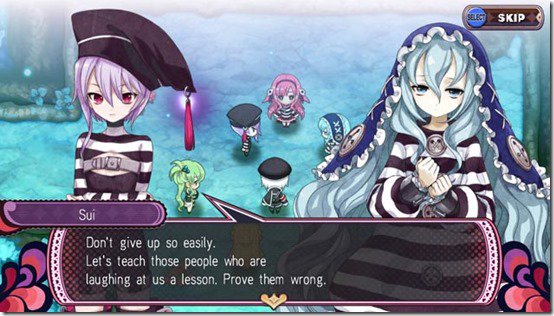 As with the last game this is a JRPG. There are seven girls who have been saved from going directly to Hell with a chance of Reformation as they had the potential for evil but died before actually committing any crimes. You play as a Program Instructor (male) who must guide them through their trials to hopefully succeed. Primarily this means walking through dungeons and telling them what attacks to use in a fight.

The dungeons are viewed from a top down perspective as you walk around with a little ‘chibi’ version of your Program Instructor followed by whoever is in your current party. The maps are actually pretty simple with different size squares and rectangles connected by small pathways so exploring isn’t massively taxing but there are different branches to check out so it’s not completely linear either. As you explore you’ll find chests, keys or switches to open doors, encounter story sections and random battles.

Battles transport you to a stage where your four fighters stand at each corner of the screen with the enemies in the middle. Criminal Girls 2 actually has a twist on the normal RPG battle formula in that the girls will choose a skill to use at random (possibly influenced by circumstance, e.g. healing) and then you choose one of your four girls to perform an attack that round. If you don’t like your options you can switch out a character for one of your others mid battle without consequence and this will reshuffle their attack choices, but you can only do this once per turn.

It’s an interesting system which gives the game an unusual dynamic in that you can’t always pick the best possible option because it may not offered to you. This can be annoying when you’re not given any good choices but on the whole I actually quite liked the change of pace. The further you get in the game the more options you unlock which just fleshes out the combat even more. 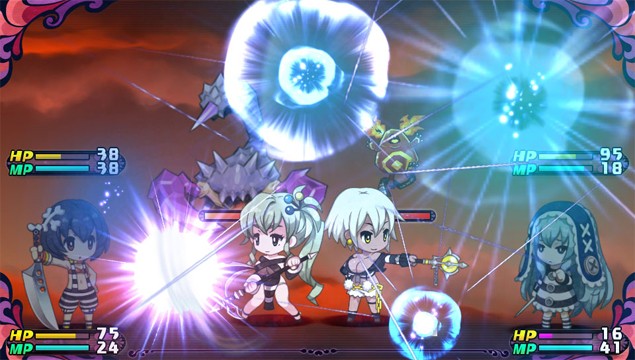 I did find that bosses were a massive difficulty spike however. I could explore every inch of a dungeon and still not be anywhere near powerful enough to fight a boss, so I’d have to grind for very long periods of time. In a game where you can’t pick your own moves tactics can be difficult but when a boss is one shotting you anyway that’s a moot point. There is a lower difficulty than normal which would probably make things a little more bearable but either the bosses should be weaker, battles should give more experience or there should be more to explore. I shouldn’t have to run around in circles trying to engage in a battle to level up.

When you first start the girls don’t even know how to do one measly physical attack, or perhaps they just refuse to do so. You as the Program Instructor much teach them. How? With the aforementioned ‘motivation’ scenes. You pick a girl and spend some ‘CM’ (your currency in this game which you can also use to buy items) to motivate her, motivate her enough and she learns a new skill.

Enough talking around it, the motivation scenes basically boil down to S&M play. There will be an image of your girl of choice seemingly bound in some way and depending on the mini-game you’ll have different activities to perform, either with the touch screen or the sticks and buttons if you prefer. The first has you scrubbing the girls clean with a brush where bubbles appear. You do this either by rubbing your finger back and forth on the screen or moving the brush with the left stick to the correct location and moving the right stick back and forth over the spot. The second involves a soft whip and spanking the girls by tapping the screen at the right time as a ring closes in. More unlock as you advance in the game but I won’t spoil the surprises.

From a purely gameplay point of view the mini-games are fine. The touch controls can be a little finicky so you’ll want to try with both the touch controls and the physical ones to see which suits you best on each specific mini-game but they are a change of pace to the normal RPG exploring and battles though when the controls let you down it can be annoying. Upon getting enough points to unlock a skill you can choose for the girl to veer towards either ‘S’ or ‘M’, S usually representing the offensive attacks and M the more defensive ones. They will then have an overall S or M rating which will change how they react when you try to coach them in battle. Scolding an ‘M’ has a better effect than scolding an ‘S’ for example.

Now in the original Japanese these ‘Motivations’ were ‘Punishments’ and I believe some of the more extreme bindings have been removed from the images in the Western release. Similarly originally the girls would protest or otherwise as you performed the mini-games whereas here they are silent (though their mouths still move). Now this could be taken two ways, censorship is bad and the original work shouldn’t be tampered with and/or that’s a little creepy. 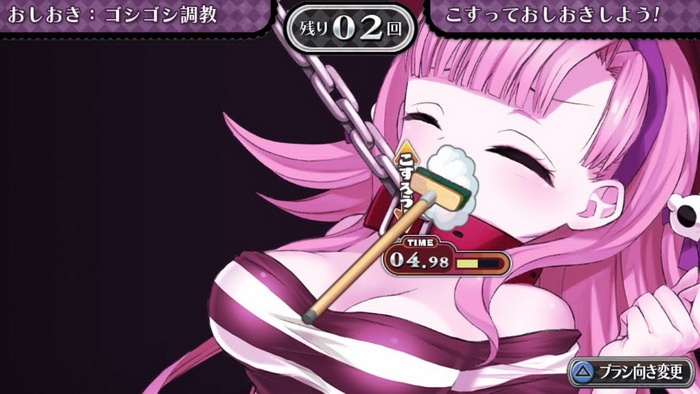 Honestly I’m not too bothered by it. I play the mini-games as games, you don’t really get to look at the girls anyway as you concentrate on hitting your target and since they all talk in Japanese I can’t understand what they’re saying. If they were constantly protesting I’d probably be a little more repulsed. I did raise an eyebrow when I had to motivate the younger looking girls and your main character acts overly nice and rather prudish in the story sections as the more forward girls try to embarrass him and yet he’s then spanking girls quite happily. There’s a strange disconnect there, though I’m not necessarily sure that’s a bad thing if I imagine what he could have been like.

Visually the game is very good. Everything is 2D and although the dungeons aren’t that interesting to look at the girls in all their forms are very well drawn, from the chibis exploring and fighting to the more detailed images in the motivation scenes. The animation is also very good, especially in the motivation scenes where the use of Live 2D really brings those characters to life. The enemies you face don’t receive the same attention but are well drawn stills all the same.

I didn’t find the music particularly memorable and you only get Japanese vocals although all of the game is voice acted, and well from what I can tell, which is a nice touch. For the story you have to click through dialogue boxes (and can be skipped with the select button if you’re repeating a section) but any dialogue in battle or during the motivation scenes isn’t subtitled which doesn’t have any vital information (I assume) but I am always disappointed when companies overlook these little elements.

I’ve thoroughly enjoyed Criminal Girls 2: Party Favors. The more titillating aspects of the game will put off the majority but although the scenes didn’t appeal to me in the way they were probably originally intended I actually found the break from the usual ‘go on an adventure to save the world’ template to be incredibly refreshing. I was actually interested in finding out what each girl had done to be in this situation. 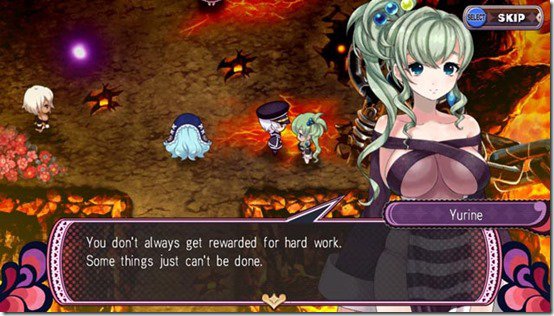 The combat is enjoyable, the moves you learn are actually helpful and although the dungeons are straight forward I just felt that meant I wasn’t second guessing my every turn. A little too much grinding is required to better the bosses and advance but thanks to the motivation mini-games breaking things up even that didn’t feel too tedious. The mini-games themselves are serviceable but don’t last long enough to really irritate.

Ultimately you’ve already decided if you’re willing to have this game on your Vita. I’ve been pleasantly surprised at the quality of the final product though I’m not going to be playing it in front of anyone anytime soon. If you like JRPGs and aren’t put off by the questionable concept then I don’t think you require any more motivation. If you do, I’ll bring the brush and you bring the bubbles.

Criminal Girls 2: Party Favors
8 Overall
Pros
+ Battle system is fun and different
+ Well drawn 2D visuals
+ Characters are actually interesting
Cons
- Concept will put off most
- Boss battles are massive difficulty spikes
- Mini-game controls aren't great
Summary
Many will shy away due to the concept alone but if you're not put off by the 'motivation' scenes then Criminal Girls 2: Party Favors is a great JRPG. A nice change of pace from your usual 'save the world' adventure, a variation on the usual turn based battle system and a very well presented game all round.