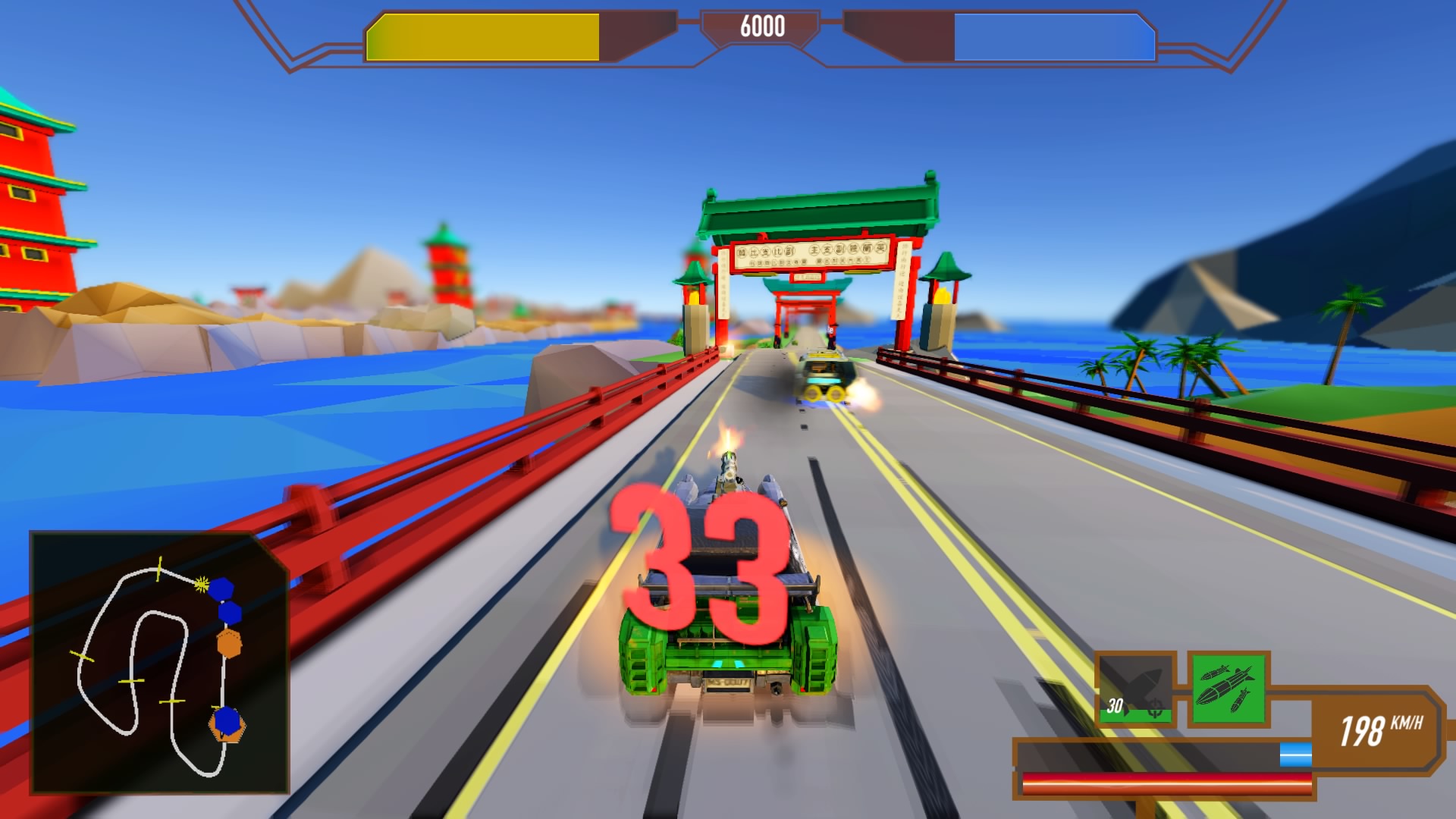 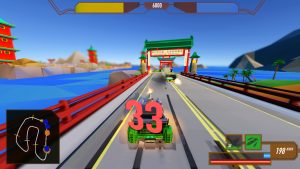 Motor Strike: Immortal Legends isn’t your standard racing game, in fact there is an argument to be made that this isn’t even a racing game.  The game markets itself as an action racer and the emphasis is firmly on the action part of things.

Things look nice enough with a pleasingly chunky art style on display it sort of reminded me of Interstate ’76 but with more vibrancy.  Things are kept simple to ensure that the game can run at a fair speed and this works a treat.  It’s an effective art style which works to keep things clear, which is needed when things start to get a bit hectic.

Rather than a traditional race to lap round a track the game is a team based game which is played for points.  Points are earned by being the first to the checkpoints, or by shooting other cars.  Get enough points before the other team and the match is won.  It is a fairly simple premise and one which isn’t really expanded upon, the only variation is the amount of points needed to win.

Races take place on a range of tracks based in highly stylised locations, full of tight corners and vertiginous drops.  The tracks themselves though feel very narrow and you’ll spend a lot of your time bouncing off the crash barriers as you fight to stay on the track.  The tracks feel forgettable and there is nothing really to make them stand out from each other.

Control is an odd one here as there are a load of buttons to use, as not only do you need to drive your car but there are three kinds of attacks, a nitro and a rescue line button (more on this later).  It’s not the simplest game to get to grips with.  Aside from the raft of buttons to learn and wrestle with I felt like I was wrestling with the actual driving as well.  Control was twitchy and seemed to lack any kind of grip and when I crashed the car would fly from the track in a kind of floaty weightless way. 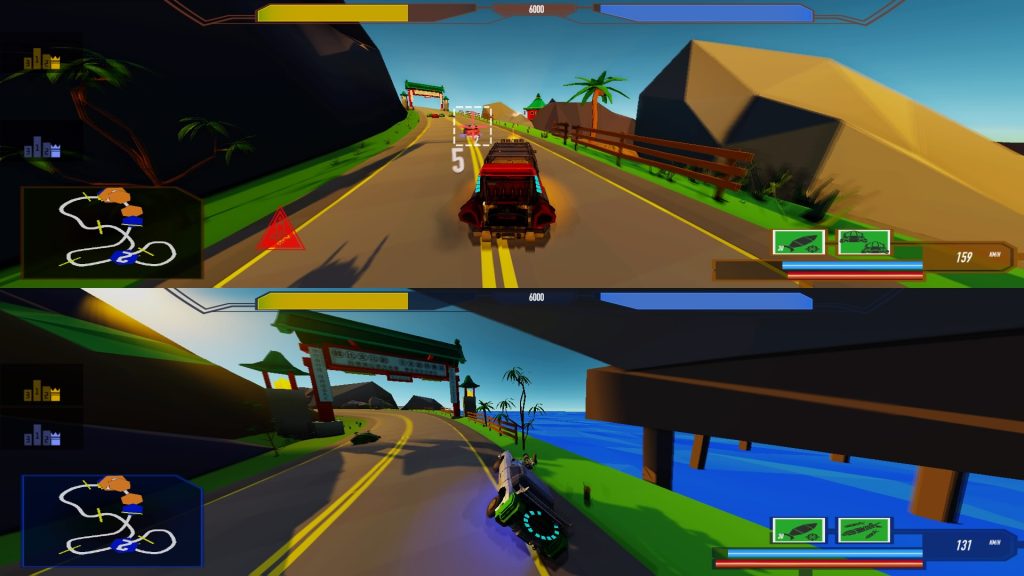 Given the narrowness of the tracks and the arcade nature of the controls I spent half my time off the track struggling to get back in place.    The game seems to be aware of this as there is a rescue line button with helps to get you back to the track.  At the press of a shoulder button the car will shoot out a white line which attaches to the centre of the track and bodily pulls you back on course.  It is a neat feature, however I can’t help but feel that it is a solution dreamt up to compensate for the substandard controls.  I’ve never played any other racer which needed such a feature.

There is no variation in the rules of the game you play as each one just relies on racing for points, this is a shame as things get samey very quick.  To add variety to proceedings there are a number of tracks, cars and weapons but crucially these need to be unlocked.    Oddly with the unlocking of items the prices in the garage seem to be different to the actual cost needed to buy them.  I never really understood why this was, but it felt odd as none of the prices seemed to match.

I felt the balance to unlocking the new items to be just on the wrong side of enjoyable.  I needed to complete two or three cups in order to have enough points to unlock either a new course or a new car, and that was for the cheaper items.  The bulk of the game here needs to be unlocked, and unlocked one at a time and there is an awful lot to unlock.  This seems like an odd decision for what should be a pick up and play arcade style game, and I felt this was detrimental to the overall enjoyment of the game.

As a team based game Motor Strike: Immortal Legends is clearly set up for multiplayer, and the game offers this in both couch play and online.  Whilst the couch play is a fair bit of fun the online is dead.  The fact is this isn’t a strong enough contender to make it a good recommendation for your mates to buy to enjoy online when there are other stronger multiplayer games out there.   Consequently most of the time spent with the game is bound to be single player and the game just doesn’t have the legs to maintain interest in this way. 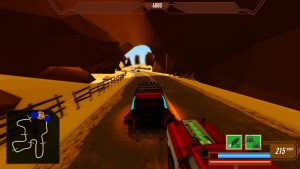 Motor Strike: Immortal Legends is sort of ok if a bit limited and hides the majority of the game behind unnecessary points unlocks.  As a racer the twitchy controls and samey tracks let it down, and as a multiplayer game the lack of variety in game modes and need to unlock everything hampers the enjoyment to be had.  Overall then it’s sort of ok, but that’s really all it is.

Motor Strike: Immortal Legends
6 Overall
Pros
+ Interesting mix of genres + The action is fast and furious + The graphics have a decent style
Cons
- Why do you need to unlock all the various cars and course? - Control is a bit too twitchy - Lack of variation makes the game forgettable
Summary
An odd hybrid of racer and vehicular combat which never quite hits the mark in either category. While there is some chaotic fun to be had in multiplayer the single player ends up becoming a little samey.