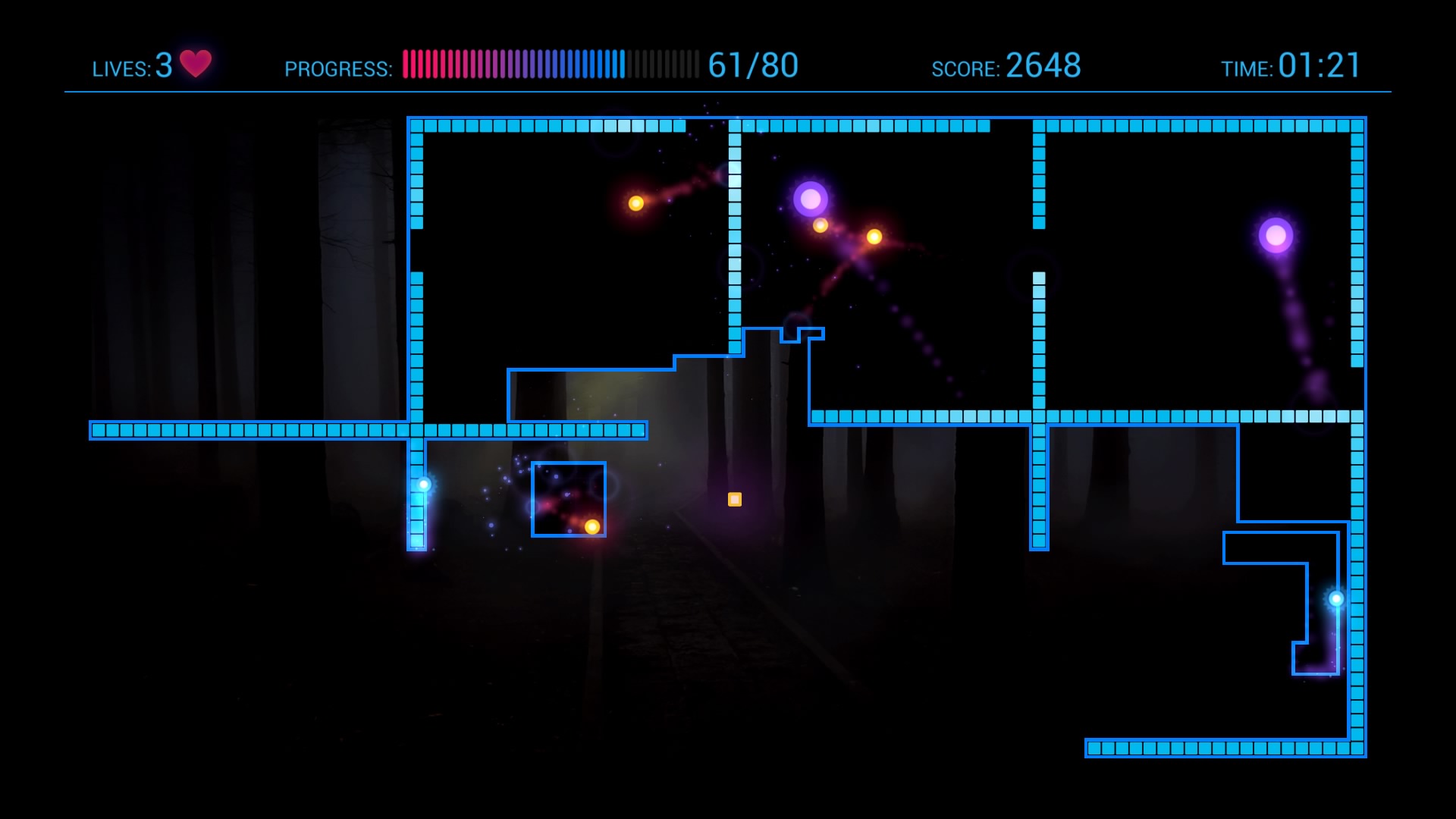 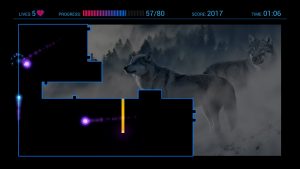 XPOSED may be a terrible name (made worse by it being all caps) but taking away the stylised nature of it, it actually speaks to what the game is all about. Based very closely on the old arcade game Qix, the game requires you to fill up screens by venturing from the edge of the screen and back.  The area you draw with your cursor as you do this will then be filled in.  Fill in 75% of the screen and you move onto the next.

The thing is, you are vulnerable when you are out there.  Balls bounce around the screen and if one touches the line you are drawing, a surge of energy speeds towards you and kills you, unless you can get back to the edge of the screen (or a filled in area).  You truly do feel exposed in these moments.  Never comfortable.  Seemingly never fast enough to get in and out.  But that’s the challenge.  The four way controls don’t offer a ton of precision, and once you leave safety, you can’t stop until you are safe again and so you feel committed to the danger. 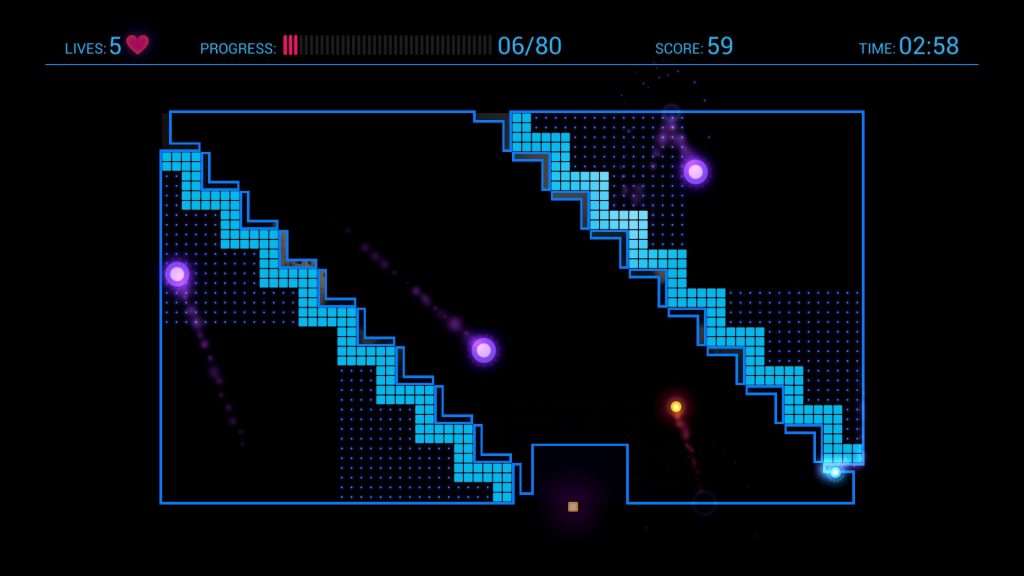 Of course, there is risk and reward.  Taking a big slab out screen out in one go is where the points and time saving is at.  But that’s where you are at your most vulnerable.  You could take out the levels in small chunks but that won’t help out your score or your trophy progress.  However, on some later levels, that’s the only way to go as the levels fill up with blocks that separate sections from each other, meaning you have to work in small silos.  Unless you can find clever, and brave, routes to link sections up.

To aid you random powerups offer temporary bonuses such as speeding you up (mildly useful), slowing enemies down (very useful) and freezing enemies (super useful) which will help you tackle some of the substantial challenge that awaits you.  You see, while XPOSED is very easy to get into, the level design can be fiendish.  The two bigger images in this review show off what a prick the game can be but even at its trickiest, the game is still enjoyable, if a little restrictive.  The open levels are more fun, but the closed off ones push you to a higher level of skill and judgement.

A good thing about the game is the structure.  What it does at the start is essentially it.  It just plays a mean game of Qix with a couple of little additions.  It adds the occasional new wrinkle to the gameplay (such as enemies that break parts of the level) but its a slow process and so you don’t feel like you’re playing an extended tutorial. 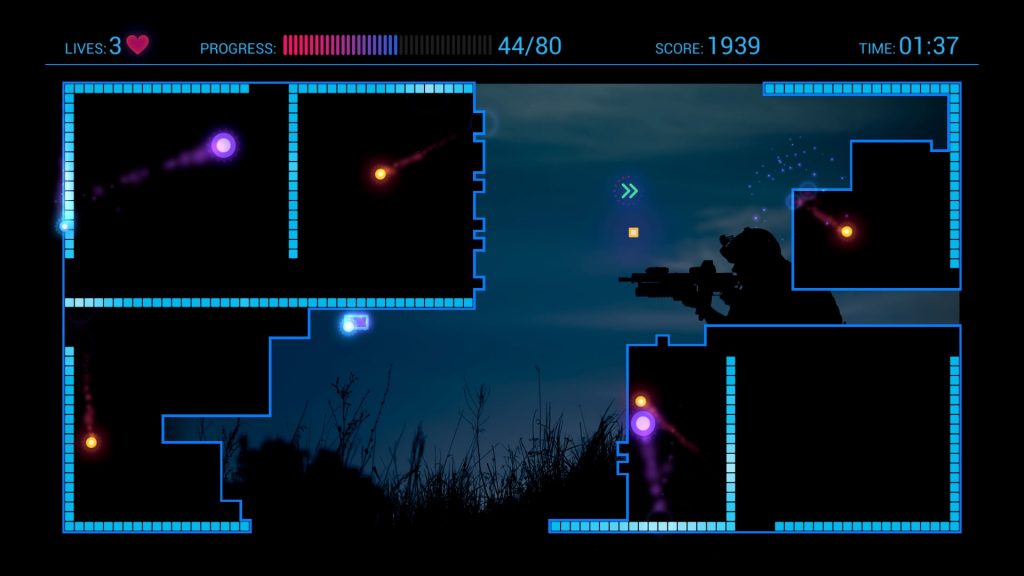 Visually the game combines fairly basic gameplay assets (essentially lines, blobs and not much else) with quite nice background art that is revealed as you broke open the levels (although the images do feel like you typed ‘HD wallpaper’ into Google.  It’s nothing special, and neither is the music, but I like the unfussy approach to the visuals here.  It works well and puts the gameplay first.

That’s really the whole approach to the game.  It doesn’t do much, but it does it well.  It’s not flashy or pretentious but it is resolutely old-school and it puts faith in its own gameplay to cash the cheques, which it does. 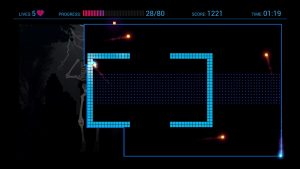 I’ve always liked Qix-type games but have never persisted with any of them (apart from Zolyx on the ZX Spectrum) and so it’s nice to have this one with its trophies and three-star awards system (each level has a star for finishing the level, one for not losing any lives and one for beating the time limit) that encourage replaying and perfecting levels.  Overall, this is exactly what I hoped the game was when I shelled out for it (no review code on this one, the publisher seems to be a hermit living on Mars).

XPOSED
7 Overall
Pros
+ Simple but fiendish gameplay + But not too fiendish + Addictive + Is like Qix
Cons
- Simple presentation - Some levels can be a be restrictive
Summary
XPOSED isn't much more complex or complicated than its spiritual grandaddy, the mighty Qix. Thankfully, it doesn't need to be. It just offers some old-school arcade action that has the power to frustrate you but never pushes it too far.