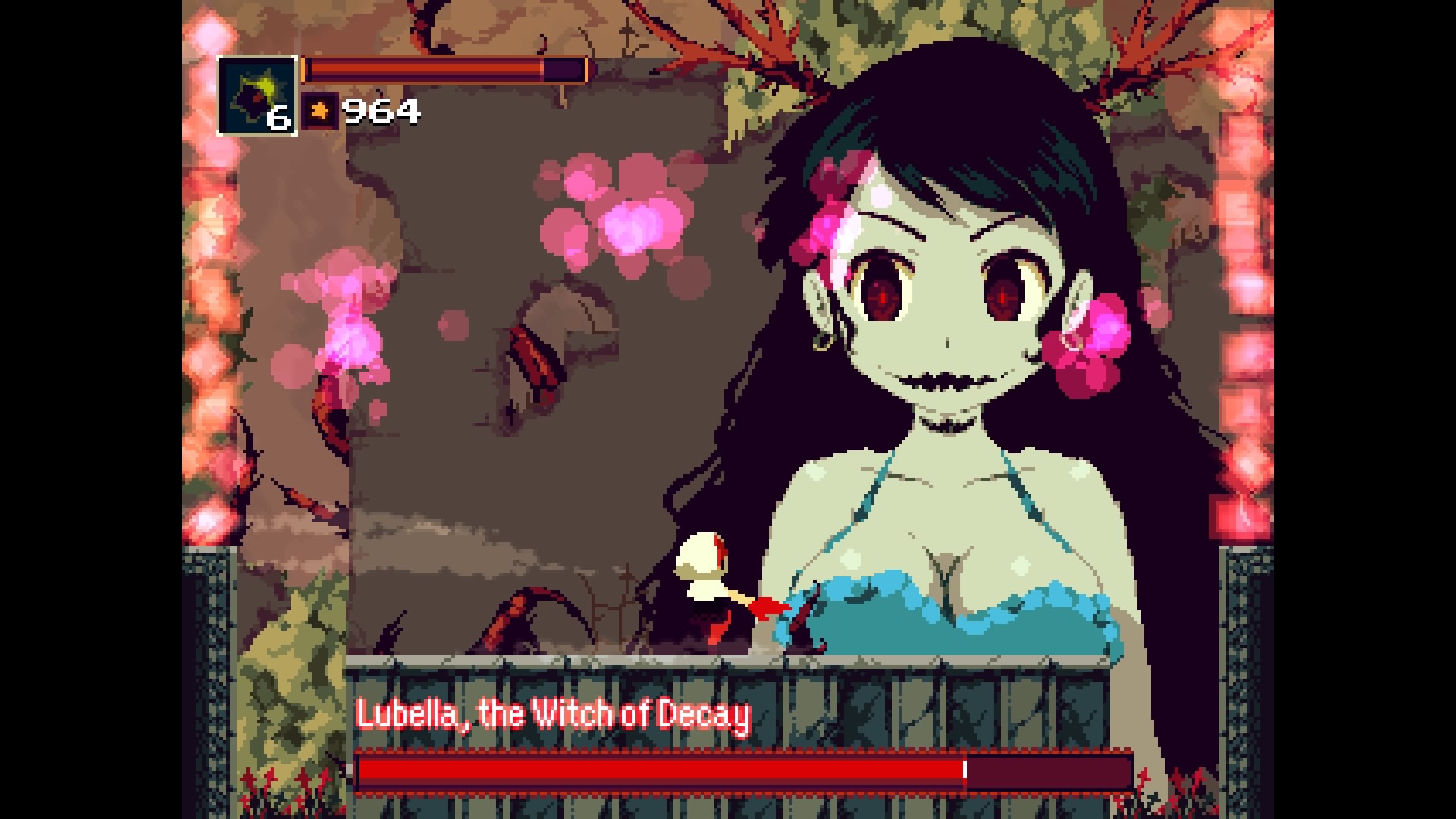 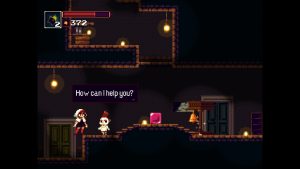 Momodora: Reverie Under the Moonlight is a game which takes inspiration from the likes of the Metroid and Castlevania, in that it’s a 2D side scrolling platform game with elements of environmental navigation and discovery.  Whilst it may be heavily inspired by these games it also brings enough fresh ideas to the table, even taking some inspiration from the combat in Dark Souls to make this worth a closer look.

First things first the sprite work in Momodora is beautiful to behold.  I’ve played more than enough 2D games to be aware of the pitfalls of the art style, they can sometimes be too bland and characterless or on the other hand too complex and unclear.  What Momodora manages to achieve is a perfect balance between simplicity and characterisation.  From the brilliant background work through to the excellent animation this game looks gorgeous in movement.  It has a charm to it which permeates every aspect of the game, from the loading screen splash art at the start through to the way the protagonist, Kaho, kicks her feet while waiting.  In motion there is something mesmerising about the animation in Momodora.

Progression through the game is on a screen by screen basis and there is a handy map which looks like something from an early Metroid game to keep track on where you’ve been.  Kaho has a double jump to help her get around and later on gains a, brilliantly unusual, ability to sneak into smaller gaps a-la Metroid.  Most of the game is fairly linear although heavy on the exploration, there is a middle section which requires a bit of back tracking but given the smaller scale of the map this isn’t a concern.  I’ve found other games of this genre can rely too heavily on back tracking with a lack of any real signposting, and I noticed this in Exile’s End.  Keeping with the genre staples there are also secret walls to uncover and shortcuts to unlock.  The map is efficiently designed and I was never at a loss of where to go next, this was probably helped by the small size of the game as it’s not a massive venture by any chance clocking in at around 6 hours or so.

The story sees you controlling a priestess called Kaho who is on a mission to see the Queen in order to save her village from an encroaching curse.  Momodora has a very light touch when it comes to the story and this makes the tale being told all the more interesting.  The tale is a sorrowful one and the interesting characters you meet along the way add to the tale in a wonderfully enigmatic way, adding a sense of the unknown and hinting at a larger world.  This is a brilliant example of a game working within the confines of a budget to tell a truly interesting tale.  The world building here is excellent with a strong sense of identity throughout and the different zones in and around the city each manage to look visually different whilst retaining a sense of location with the rest of the game. 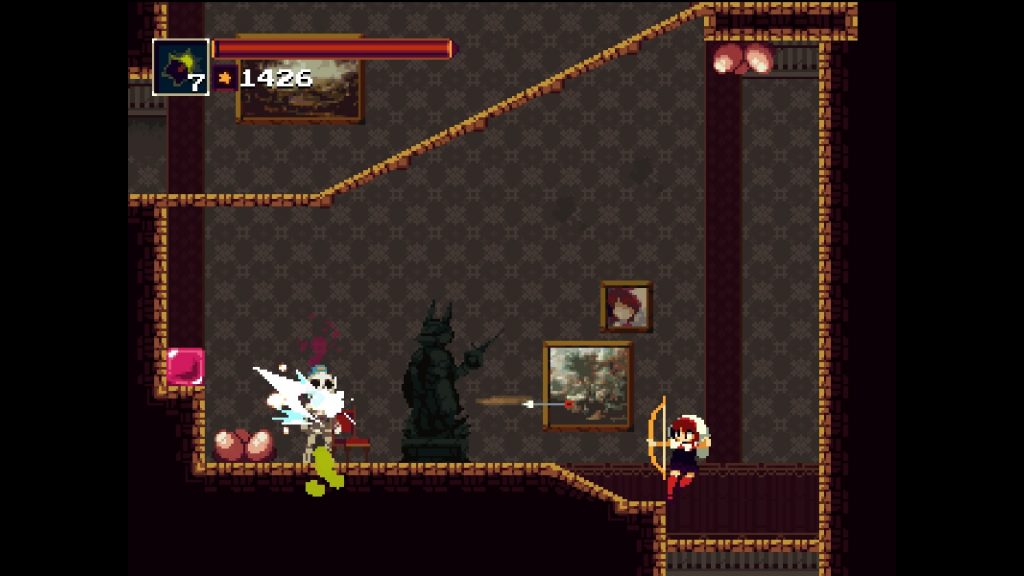 Combat plays a huge role here and as you are working through the game you’ll be engaging with a range of enemy types.  Kaho’s weapons of choice are a maple leaf for melee combat and a bow with unlimited ammo for ranged attacks.  Using both of these attacks is key to success and the bow is equally as important as your close attacks.  To help you on your way you’ve also got a dodge roll, which allows you to roll behind enemy shields or dodge attacks.  Combat feels weighty and purposeful and successful execution of the rolls and dodges feels satisfying and rewarding.  This isn’t a game where you’ll go in guns blazing, combat is much more nuanced.

One of the things which stood out for me was the many bosses I came across.  These ranged from screen filling sprites down to player sized knights, and each one was satisfying to fight.  Every boss brought something new to the table and every fight was different.  I won’t spoil these fights but they really are a highlight of the game and some of the best I’ve come across in a 2D game in a while.  I also found the difficulty of these bosses to be really well judged, with well telegraphed attacks allowing me to dodge around them learn their movesets with no cheap attacks thrown at you.  The variety and ingenuity of the boss battles somehow reminded me of the boss battles in Dark Souls and that is high praise from me. 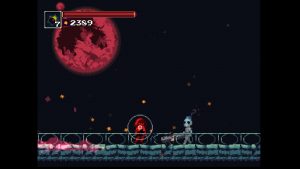 I’m a fan of a small tightly focused game and Momodora: Reverie Under the Moonlight ticks all the right boxes.  It is a game with bags and bags of charm and the animation is wonderful to look at.  Playing the game it felt like there were surprises around every corner, and every aspect felt crafted and tailored to near perfection.  Whilst the short running time and 2D graphics will put some people off this is a game which I can easily recommend.

Momodora: Reverie Under the Moonlight
9 Overall
Pros
+ Gorgeous animation which makes the game look lovely in motion + Excellent weighty combat and brilliant boss battles + Great map design with well placed shortcuts and secrets + Interesting story told sparingly but effectively
Cons
- The short running time is a disappointment - The low fi graphics will put some people off
Summary
Momodora: Reverie Under the Moonlight ticks all the boxes. It is a game with bags and bags of charm and the animation is wonderful to look at. With excellent weighty combat and some particularly memorable bosses, every aspect of the game feels crafted and tailored to near perfection. Whilst the short running time and 2D graphics will put some people off this is a game which I can easily recommend.