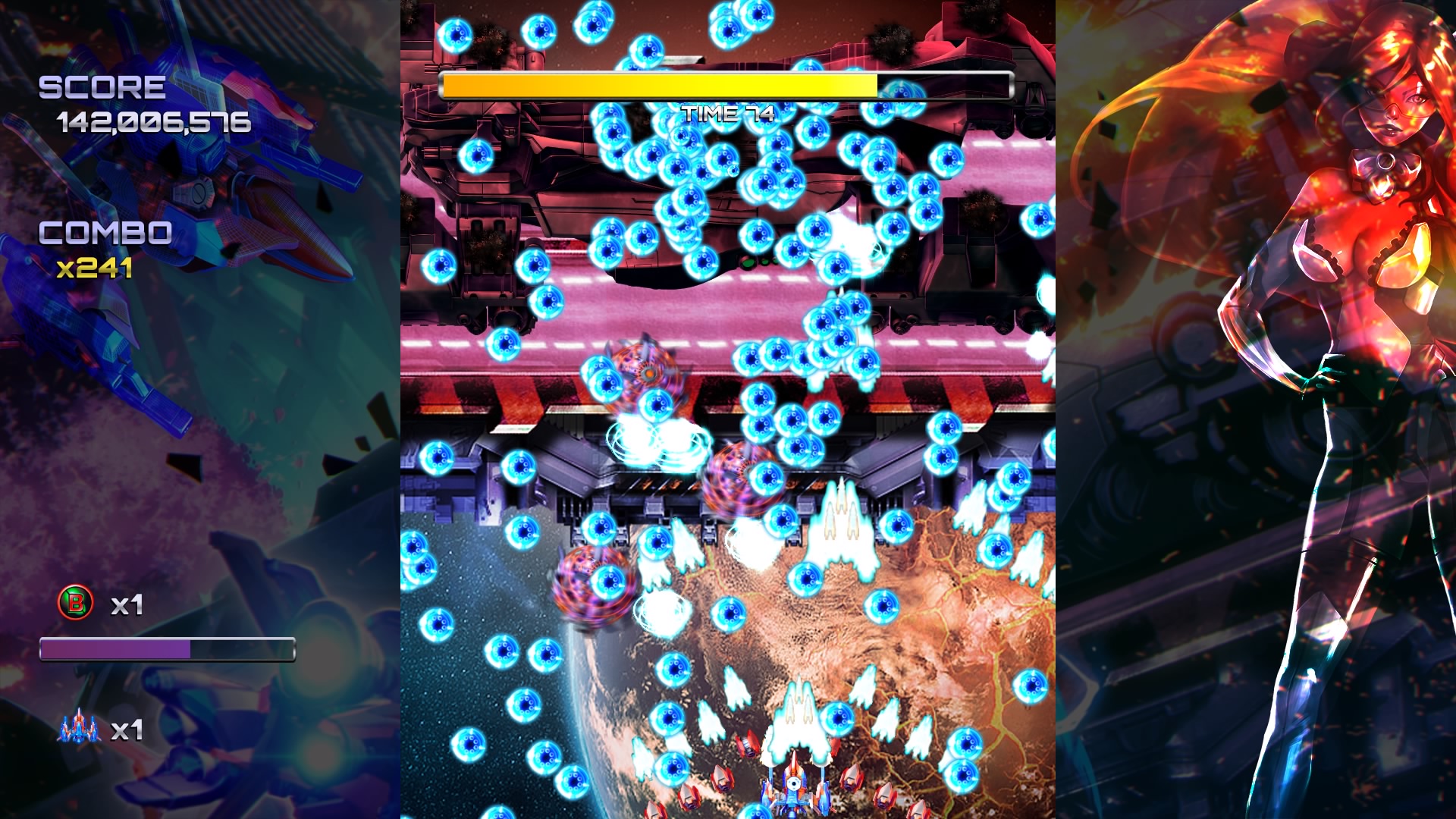 Ghost Blade HD is a bullet hell shoot ’em up in the vertically-scrolling tradition and at first viewing you’d swear it was Japanese given that your three choices of pilots are all anime girls. In fact, this game comes by way of German coders Hucast but they’ve definitely done their homework.  This remake of a late entry on the Dreamcast (which continues to receive shoot ’em ups way after its commercial death) is certainly traditional.

At the start of the game you pick your pilot and difficulty level. The three pilots differ in terms of the spread of their bullets, so you need to pick based on your preferred style. Do you want to spread your firepower across the screen? Or do you want more focused, heavier damage on specific targets? Either way, you also get a focused shot if you hold the square button, which is great for taking out larger enemies. 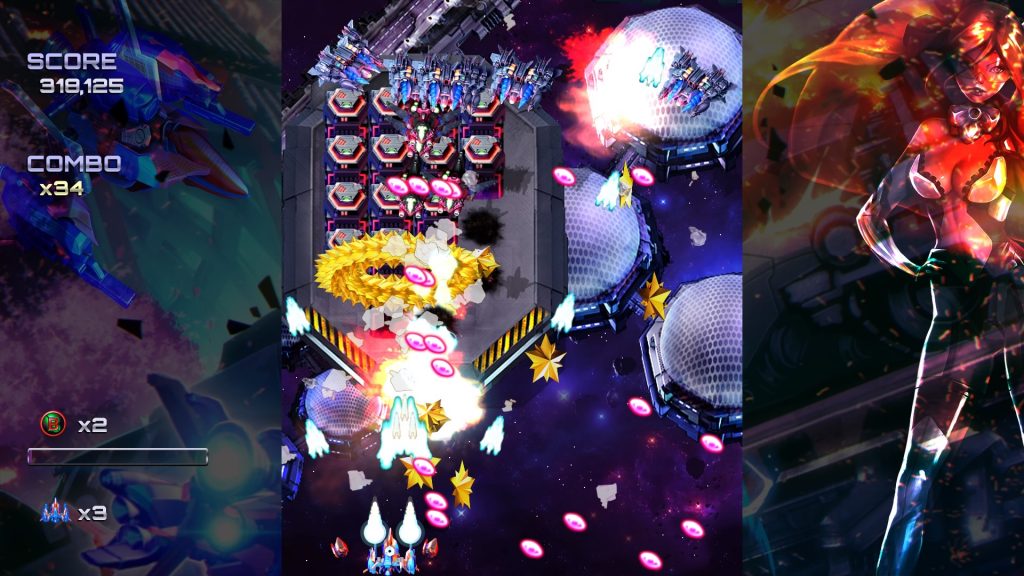 In a homage to the classic Cave shooters out there, the focused shot slows you down which sometimes helps but often hinders you but it does cause enemies to drop tech orbs which help to refill your store of bombs.  As ever, the choice is yours but you’ll want to kill your enemies pretty quickly as they are likely going to spew all of their bullets at you as soon as they can.

The game could do a better job of explaining all that though.  There’s a training mode but it doesn’t teach you anything, instead it just lets you practise the levels but with fat amounts of firepower.  Even a text guide would be nice but once you figure out the ‘narrow fire = tech orbs = shield’ thing, you’re sorted. 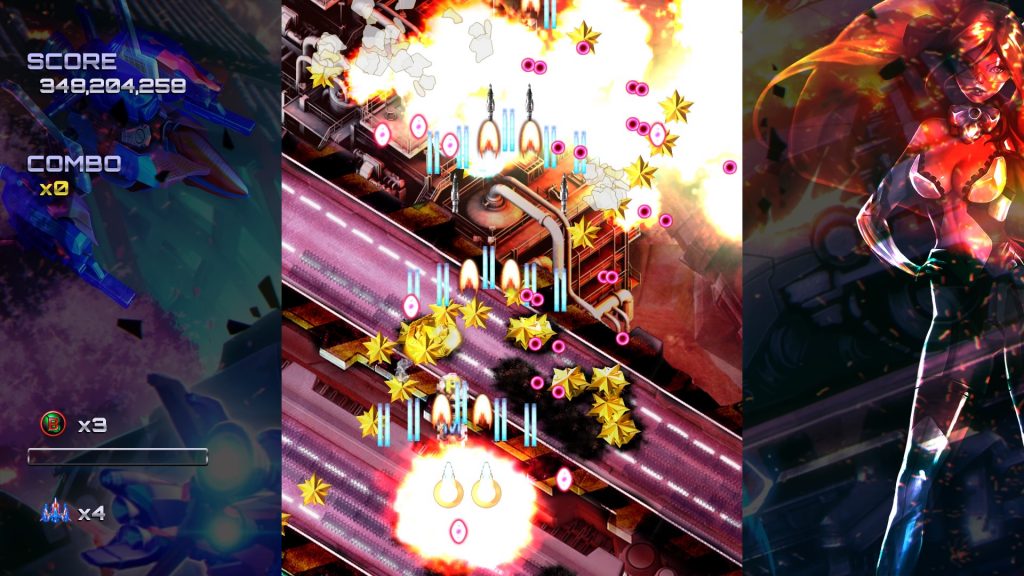 Aside from that, Ghost Blade HD keeps it all pretty simple.  There’s no complex scoring mechanics, no swirling orbital pick ups, no Ikaruga colour switching or anything else of note.  Just enemies and bullets.  The lack of complex rules and ship variations makes this an ideal title for PS4 owners who want to dip their toe in the genre.  This may put off veterans but I quite like the simplicity of it.  That’s the only thing that is simple though as despite the game’s short length (just five levels) it is a pretty taxing title.  Especially when you get to the bosses of each level.  These behemoths take plenty of damage and fire out more bullets than the average US college student and will take a big bite out of your supply of lives if you aren’t careful.

A choice of difficulty settings helps but even on Easy this game packs in quite a lot of challenge in the later levels.  This is partially due to the sheer weight of firepower that you have to navigate through but also thanks to some slightly messy visuals.  While the game looks great and has had its look massively overhauled since the Dreamcast version, I tended to be surprised by most of my deaths.  One thing Cave always seem to get right is the clarity of the bullets but Ghost Blade HD lets itself down in this regard. 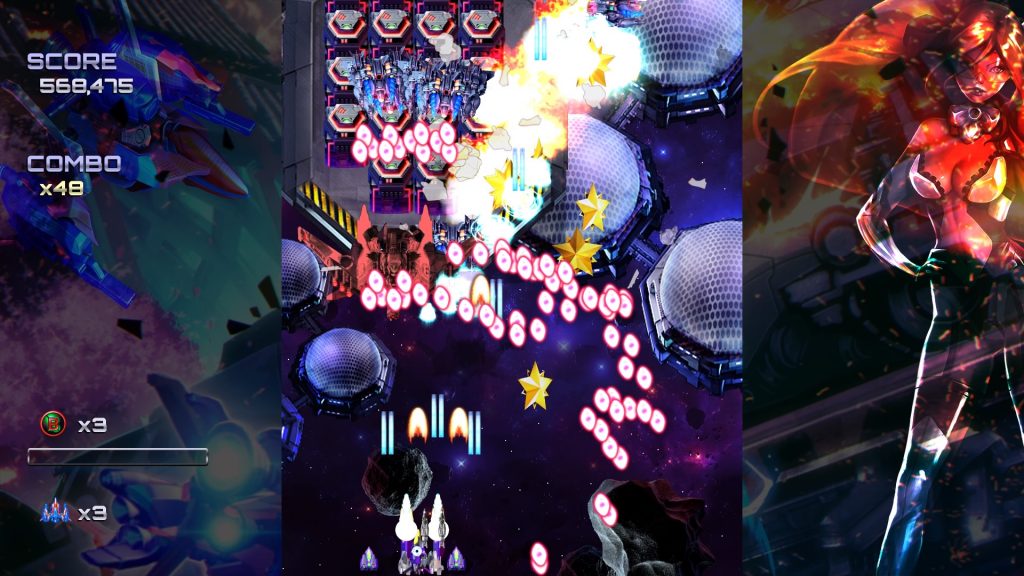 It’s not entirely game ruining though and a smart list of trophies gives you a reason to improve without ever asking too much of you.  It’s tough but it’s not bastard Dariusburst levels of tough and I have to admit that I’ve had plenty of fun for the game’s low asking price but then I’m a fan of this sort of thing.   That said, there’s a real lack of variation to the levels which hurts things a little.  While you’ve not really got much of a chance to admire the visuals, it’d be nice if they weren’t quite so generic and repetitive.

If they sorted out the ‘what hit me’ factor and maybe took a couple more chances with the gameplay then this could be a genre favourite but instead its a serviceable tribute to the superior work of Cave and other shoot ’em up maestros.  Better shoot ’em up players than me will probably hate it but the gamer in me is mostly tolerant of its faults, the reviewer in me however can’t give it a higher score than the one below.

Ghost Blade HD
6 Overall
Pros
+ Satisfying shooting action
+ Huge amounts of bullets (if you like that sort of thing)
+ Attractive visuals
+ Not too complex
Cons
- Suffers from invisible bullet syndrome
- Lacks variation
- No real tutorial
- Bosses can be a bit too much of a pig
Summary
Ghost Blade HD comes close to being a very good shoot 'em up but visual issues and a lack of ambition hold it back. That said, there aren't many bullet hell shooters on the PS4 and this isn't a bad option if you fancy sacrificing your thumbs and retinas to the cause.