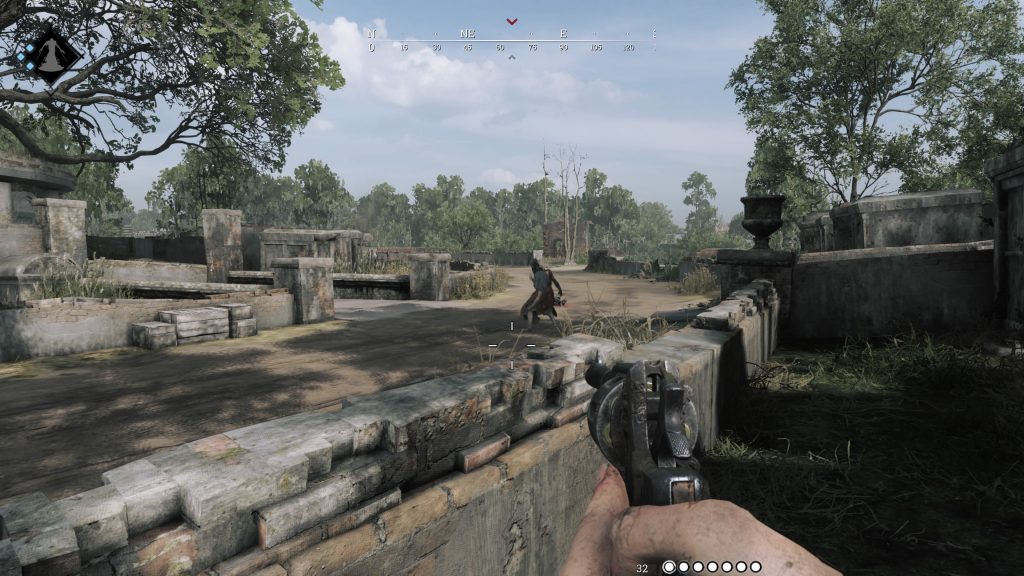 Dealing with simple NPC’s can either be a path clearance exercise or a an action which causes you needless pain.

There is an undeniable feeling of helplessness that can be experienced with playing Hunt Showdown. The latest effort from the team at Crytek is designed at its very core to be one of the most unforgiving experiences ever made. With every small action having the potential to warrant an equal or insurmountable reaction if you’re not careful enough or play by the unwritten rules of the game.

This feeling of dread can be felt immediately from the word go. Hunt: Showdown is a multiplayer title, recently out of early access. With no single player at this stage, it’s reasonable to feel alone, especially when going up against seasoned players from other platforms, twitch fanatics and a varied bestiary of NPC creatures who would gladly contribute to the steep learning curve that awaits you.

As the player, you are tasked with battling through the swamps of 19th century Louisiana to take on bounty contracts. These contracts involve scoping around the large map for clues using your dark sight ability, until a boss location is revealed to you. Once done, it is up to you or your competitors to take out one of the large beasties that lay in wait for victims to wander into their lair. These range from a large spider that can easily outpace and murder an unprepared hunter, a Butcher that has no qualms with chasing down player meat to slaughter and an assassin type that matches sneakiness with lethality. 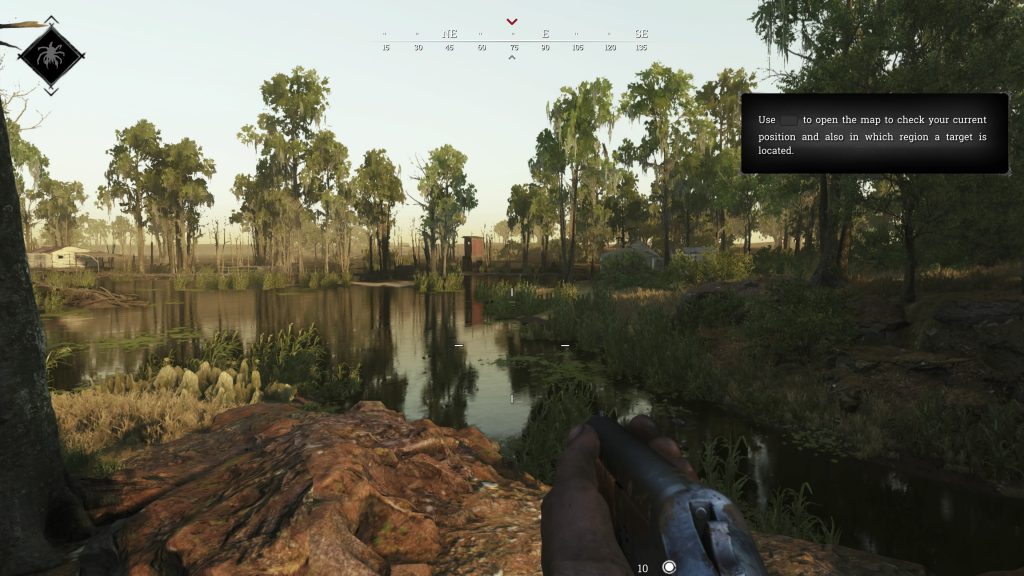 Once your contract is downed, then you must perform a ritual, collect the bounty tokens and then leave the area from an extraction point. On paper, this sounds like a relatively straight forward deal, but all throughout this process is the consistent threat of other players and lesser creatures in between, all with their own aptitude of finding ways to end your life. If you are not feeling daunted enough by imagining everything above in a single game, then you likely have a stronger resolve than I do. The to-do list is extensive compared to most multiplayer games of this type and having perform all of this on one life per round can quickly make Hunt: Showdown seem insurmountable, and this is where you need to dive into the depths that this game has to offer as you can technically cut corners to achieve the win you want.

For example, getting all of the clues first in a round is great and all, but when you consider that other players are gunning for the same, you can instead take your time and close in on the boss when you hear the gunshots firing at it. You can then lay in wait while the boss tokens are collected after the PVP chaos ensues and collect a win from the weakened victor. An alternative is to ignore the objectives altogether and rack up kills, attacking clue nodes specifically so you can clear the opposition and take on the boss unhindered. You could also sabotage the progress of other players at the boss or nodes by laying traps of higher traffic spots, picking off hapless players to thin the competitor herd so to speak. All of these are viable strategies, with many more becoming available as you play thanks to the many emergent mechanics that make it all possible.

Some of those tactics may see a bit cheap to some reading this, however there is a reason for cautiousness in Hunt Showdown. As previously mentioned, the game is unforgiving and nothing proves this more than the fact that after you hit rank 10, if your character dies then with them dies the equipment they are holding, and you do not get this back. It’s a gut punch from hell when this happens the first time and doesn’t feel any better when it happens after the fiftieth time either. Then, it makes sense that sometimes you may want to play dirty for the win or stay stealthy to ensure that you at least survive the round intact, discouraging brute force play while dialling up all threats, including the world itself. 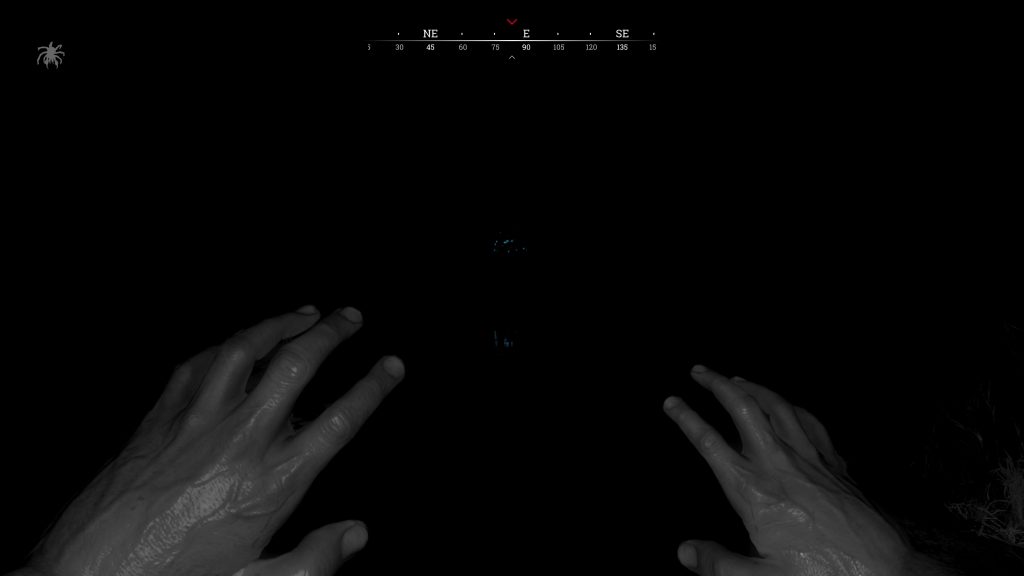 Unfortunately, while this perma-death element may be a winner for some, for others that must play the game without a party of friends will find Hunt a bit harder to enjoy. The reason for this is within that risk. If you are a lower rank that your queuing counterparts, then there is a big chance that you will find yourself hitting “find partner” again and again in hope for someone that is not too fussed about the rank that you hold. Because the higherups quite rightly will want to keep their best avatars alive for as long as possible so they don’t have to grind for cash to buy better hunters and gear. It’s an unfortunate side effect, but one that is eradicate as soon as you have like minded people to play with.

Crytek has always been known for delivering graphical powerhouse visuals, what with being the team behind Crysis and the original Far Cry, both being games that required a mortgage to run in their respective hardware lifecycles. But where Hunt Showdown really shines is in the audio department. It is both your biggest ally and enemy in this game and learning to play with sound in mind is vital for your success. Throughout the maps are elements which cause noise, from potential accidental cacophony’s in the forms of a murder of crows waiting to shriek when they see you, skittish caged dogs and interactable noise makers in the form of gramophones and electrical generators.

As a player you can either set these off as bait for players, use them to attract other players or NPC’s to you or use the noise of other players setting these off to pinpoint their location as you hunt them down as the dogs they are. These are the less subtle audible moments of course, there are many more. Notably if you hear an enemy character or zombie running through a house then with a good set of headphones you can hear where they are and what elevation they may be. Other elements in buildings are helpful also, hanging chains clink and clatter to reveal quiet crouchers and broken glass on the floor provides more echolocation that you can use to get the drop on someone or something. It’s a fantastically implemented system and one that can drastically change your success rate if you take the time to learn it. It does however mandate that you play Hunt Showdown with a pair of good headphones so that you make the most of it. 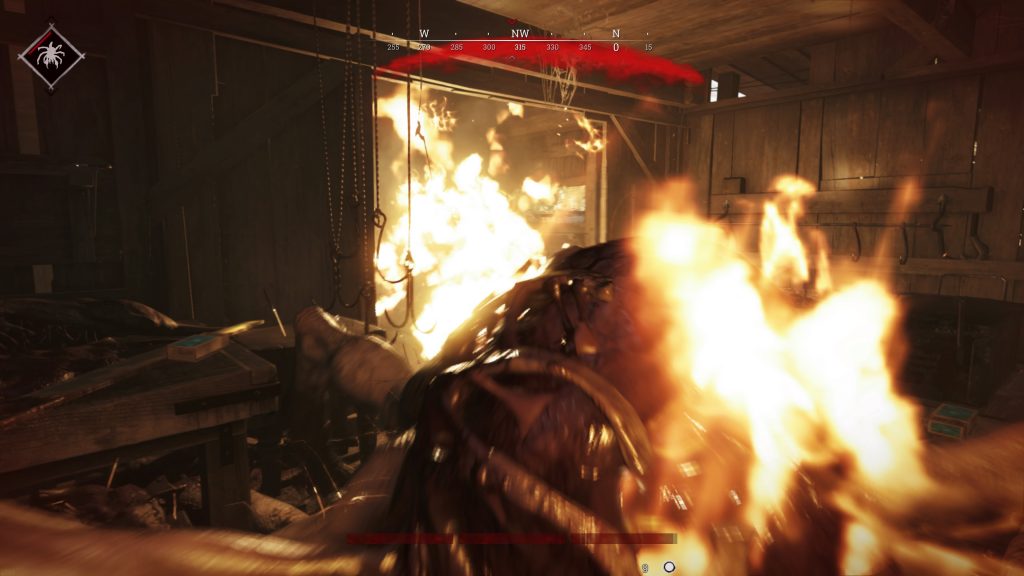 The bosses in Hunt can be either one of the best experiences or the worst, depending on your enemies and how prepared you are.

Of course, sound also plays heavily into the gunplay. Instead of taking out a dying horse that squeals and whinnies in pain with a rifle shot, you have to consider that the sound can be heard from meters around by other players who may be tracking you specifically. This poses extra problems when you consider that you are dealing with 19th century weaponry that have slow firing rates and even slower reload times. This would make you have to consider more stealthy methods to clear audio cues, such as using one of the melee weapons dotted around or throwing knives or one of the many other unlocks you gain across your many hunts, such as crossbows or silenced guns which streamline your playtime.

The most notable takeaway from the audible department is just how much this makes the world of Hunt Showdown a threat. There is so much information to take in with each round that it’s very likely that if you are playing one of the night variants then you will end up stumbling into one of these noise traps. Or worse, you could end up running from one battle into a horde of hellhounds which bleed you within seconds of the pack descending on you or being munched by a water devil as you wade slowly through the bayou. Learning the maps becomes equally as vital, luckily there are only two to start with for now with more on the way, Which sounds like a copout, but when you have so much to learn, some time to learn both won’t hurt. They are expansive enough to make Hunt feel different enough from one round to the other but not so much that you never get to learn the lay of the land either.

If the above doesn’t sound as interesting or you need a breather from the default Bounty Hunt mode as covered above, then there is a side distraction in the form of Quickplay. This mode is more of a standard battle royale experience which is faster paced and basically ends on a last man standing gameplay loop. It’s fun and helps you learn combat and the maps a bit more, with the payoff being that if you win a round then the character that you play as gets unlocked for use in Bounty Hunt, which is great if you want a beefed up toon with a loadout to match. It’s clearly not the designated mode however, so for now, if Bounty hunt doesn’t sound like your thing then Hunt Showdown becomes slightly harder to recommend. 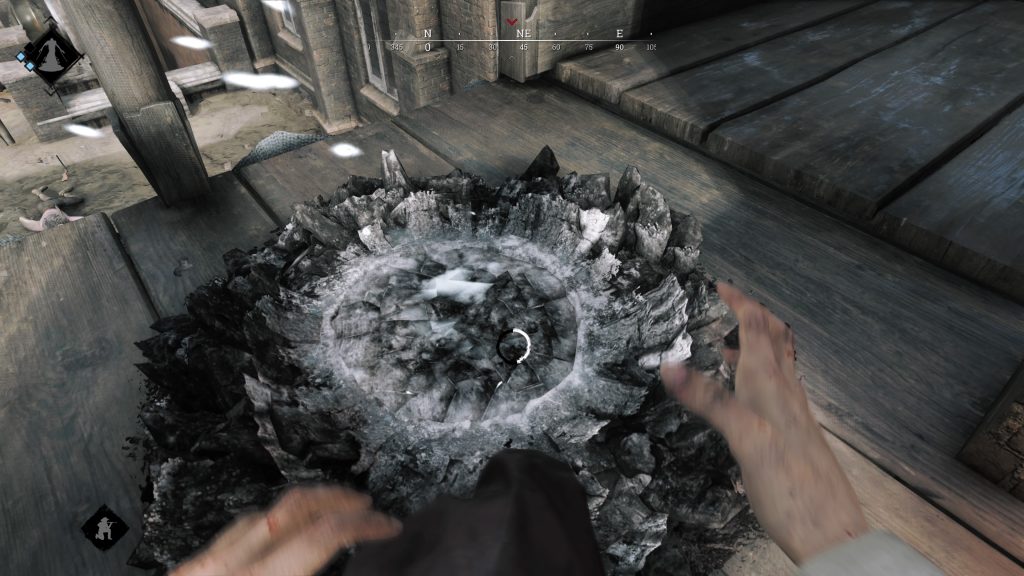 One of the many boss clues that you will have to clear before you find the head beast of the map.

If it does sound like your sort of thing, then you will be hard pressed to find an alternative title that creates a unique, tactical multiplayer experience that works as well as this. Especially one that is as rewarding as it is brutal and with a learning curve as steep as the reward for success that surely comes with perseverance and a few friends to work with. There are a few bugs that get in the way of making this a perfect experience, notably one that resulted in half of the world and weaponry not rendering until I forced restart and some matchmaking connection woes. But when it works, which is thankfully most of the time, Hunt Showdown is a blast.

Hunt Showdown
8 Overall
Pros
+ Clever use of audio cues to allow you and enemies to get a jump on eachother
+ Satisfying game loop with a ton of reward when successful
+ Great setting and bestiary
+ Truly tense and tactical
Cons
- Very unforgiving
- Long loading screens break up the action a lot
- Occasional glitches which can ruin some rounds
- Less of the PVE aspect than I would have liked
Summary
From tense standoff gameplay to the 19th century Louisana meets survival horror PVE elements. Hunt Showdown is a tense, tactical multiplayer experience that circumvents the tired battle-royale genre by being something unique. Excellent sound design and atmospheric visuals round off the package, with only a few infrequent bugs that get in the way.