More and more strategy games are finding a home on consoles with the slower paced, mouse based gameplay often translating well to the control pad. Two Point Hospital has now made the jump to PS4 and continues to prove that this style of game works very well outside of the PC. 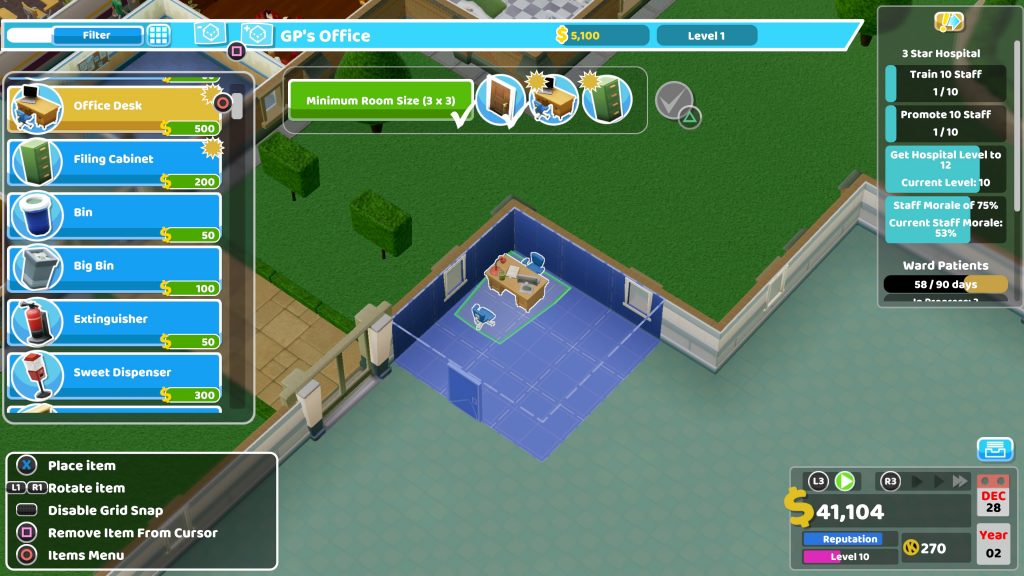 If you played the classic Theme Hospital back in the day then you’ve got a pretty good idea of what Two Point Hospital is. You’re in charge of building and running a hospital, attracting patients, diagnosing and curing them and making sure you do this within budget or, more preferably, whilst making a profit. The campaign guides you through how to do this, introducing new features and facilities slowly whilst giving you objectives to complete that’ll have you expanding your hospital whilst trying to keep your patients and workers happy.

To start with things are pretty straight forward. You’ll be tasked with building a reception to greet the patients, a GP to diagnose them and a pharmacy to treat them. You’ll also need to provide toilets and a staff room for breaks. Hiring assistants, doctors, nurses and janitors to keep these services requires some thought as they all come with their own skills, personality traits and salaries. What seems quite simple early on quickly turns into a balancing act as you need enough staff to cover when others are taking a break but not so many as to be wasting money, whilst making sure they’re good at the jobs they’re doing.

Each level has three stars to collect, completing a list of objectives will grant you a star and some rewards. Each level also tends to lean towards one element to train you in how to use it. For example you might have a hospital in a cold climate which will teach you about heating or you may gain access to the training room which lets you train up your staff in order to improve them and the tasks will centre around this. You’ll also have to be running a functioning hospital in the meantime which, as you progress, is where the difficulty comes in. 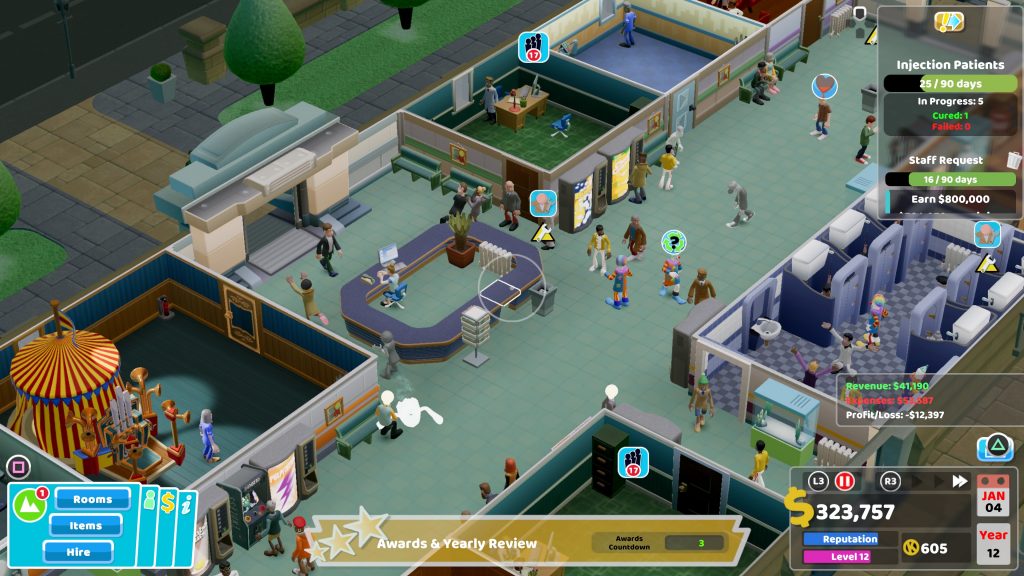 Upon receiving one star you’ll unlock the next level and cleverly if you advance you can actually take the facilities you unlock back to previous levels to help gain those three stars if you’re struggling or just for fun if you want. At the moment there is no sandbox mode (it is coming at the end of the month apparently) so if you’ve beaten all the hospitals which will take a long time as there’s extra DLC included by default with the PS4 release then the only way to continue playing is to go back to earlier hospitals to improve them with the facilities and knowledge you’ve gained since.

Getting three stars is going to take a while however, but the game rewards you for everything you do. All the hospitals come under one organisation so you’ll be building up your overall value and you’ll be rewarded with Kudosh for completing certain challenges (cure x amount of patients, train x amount of employees, get x amount of stars) which can be used to unlock advanced items for you to buy and use in your hospital. Want to put more expensive snack machines in your hospital to gain a bit ore money out of your patients? Unlock the luxury snack machine. Maybe an arcade cabinet to provide entertainment whilst also earning money. There are lots of optional items, some more useful than others, some just for fun and you’ll be earning Kudosh just from playing the game.

Control-wise everything works very well. Using the left analogue stick to move your cursor around,

opens a menu which lets you build rooms, buy items and hire staff with

getting you into lists for staff, patients, your financials, loans and other info. Everything is based on a grid so building is easy and if you want to work without time pressure a click of the left stick will pause time letting you sort things out at your leisure. The cursor is quite big but in general selecting stuff is not a problem. 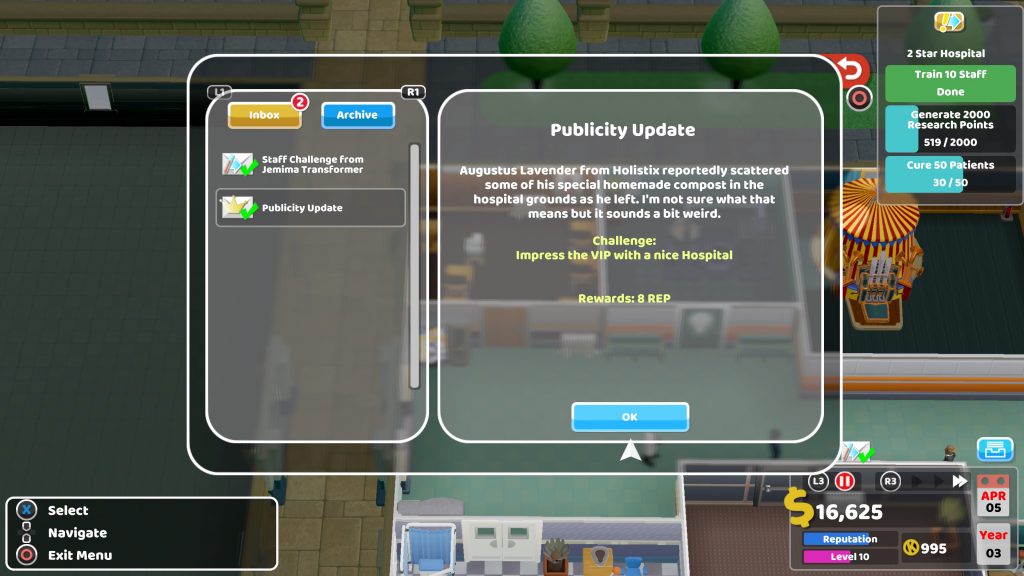 I did encounter a couple of bugs. When you beat the tasks and collect a star a letter appears on screen to congratulate you and when it occurred at the same time as the end of year awards (where you get money and reputation for having the most improved doctor, the patient’s choice of hospital or have a year without deaths, for example) then the letter just stayed on my screen and wouldn’t go away. I also remodelled my hospital at some point and despite there being a clear path through the hospital people started to freak out and claim they were stuck and objects that were accessible suddenly were claiming not to be and I couldn’t pick them up and place them down anywhere. I eventually got around it but it was a lot of extra work.

In general everything runs very well however. Combine this with the humour that runs through it all and you have a very enjoyable management sim. The music being catchy but acting like a radio station with a mixture of DJs, the illnesses and treatments being absurd and just a general lack of seriousness around a very serious subject. Even when things aren’t quite going right you’ll be enjoying yourself in your quest for three stars and seeing what new facility or feature you’ll get access to next. 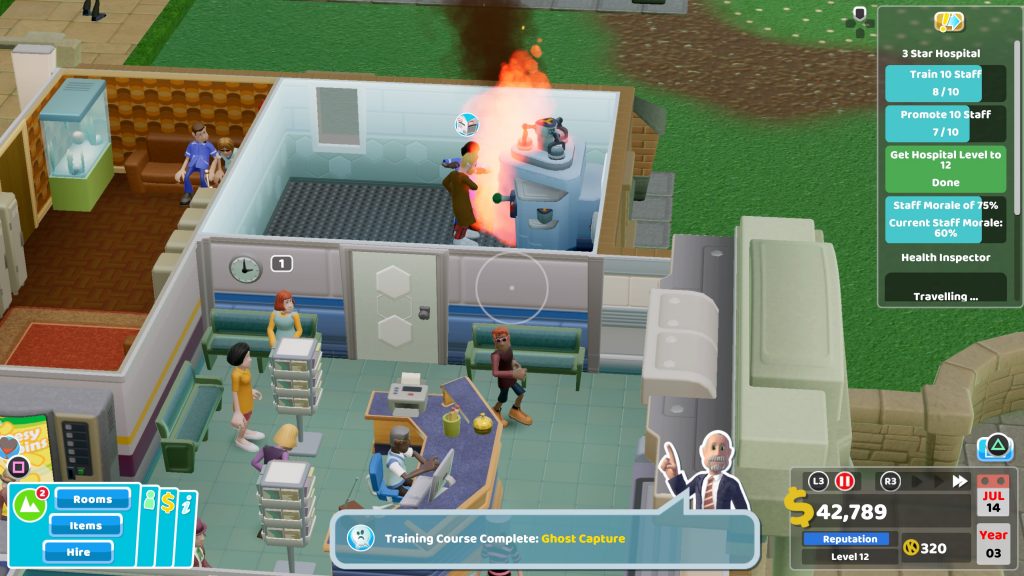 Those things were true with Theme Hospital as well and Two Point Hospital doesn’t stray too far for that formula set out all those years ago. I don’t personally see that as a bad thing however and it does everything so well that fans of Bullfrog’s classic or business simulation games would be foolish to ignore this one.

Two Point Hospital
8 Overall
Pros
+ Controls work perfectly
+ Great sense of humour
+ Management challenges will keep you hooked
Cons
- Maybe too similar to Theme Hospital
- Some bugs
Summary
Two Point Hospital is a fantastic and funny management sim that you'll lose hours at a time to as you attempt to build the perfect hospital and unlock those three stars.