I feel like I miss the boat on team-based, online-only shooters. Part of me maybe sees them as a commitment and I always tend to get left behind by an improving community. I suck, basically. Spanish developers Fluxart Studios are now throwing their hat into the ring with a much more simplified effort. So far, Holfraine seems like something I can get to grips with. 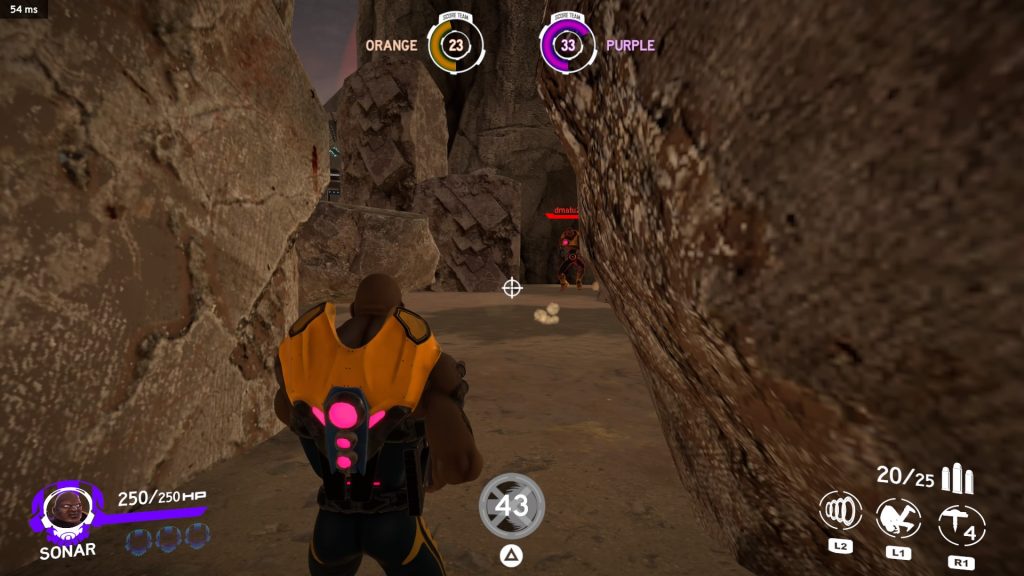 Holfraine is a team-based third-person shooter that reminds me an awful lot about Team Fortress. With one map and game mode, it has a very specific avenue it’s trying to walk. The matches all have the same structure to them. Two teams of three battle in a first to fifty contest. Points are scored by capturing points on the map or capturing and delivering the opposing team’s drone to your base. Kills also county but the objectives are where the battles tend to be won and lost.

The map size is small with the opposing base being in sight at all times. Consider it a football field in length. As a result, the matches become short, snappy affairs. Capture points only tend to spawn in familiar areas in the map. It makes the game very easy to read and eliminates some potential communication issues. There is nothing complex going on here and the objectives do allow for unskilled marksmen like myself to contribute something. 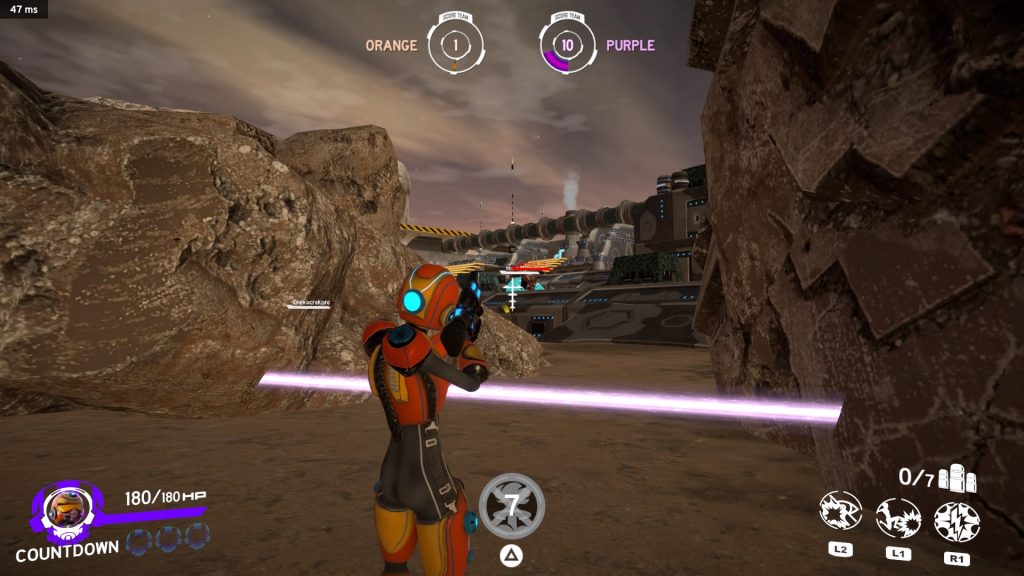 You have six characters to choose from. They don’t have jobs or classes to perform but each has their own unique weapon and ability set. With there being so little to do in a match, they all seem viable whether they’re taking kills or objectives. Each character has alternative fire modes, a traversal ability and other additional tricks. Roadblock is more defensively minded with plenty of shields to deploy. His weaponry lacks a punch and his shields seem of a selfish mindset. Only his ultimate ability has any kind of range to it.

Psycho comes equipped with a Gatling gun which takes time to spool up but has plenty of ammo. He’s certainly a critical damage dealer. He also has one of the better mobility options as he can rocket short distances. This makes him a good choice for drone retrievals. Huntress operates as the token sniper. I find her shots difficult to line up with her scope being very sensitive by default. She can deploy exploding decoys. With the map being modest in size, long range shooting doesn’t come into play too much. Still, you can hang back with her and cover any allies. 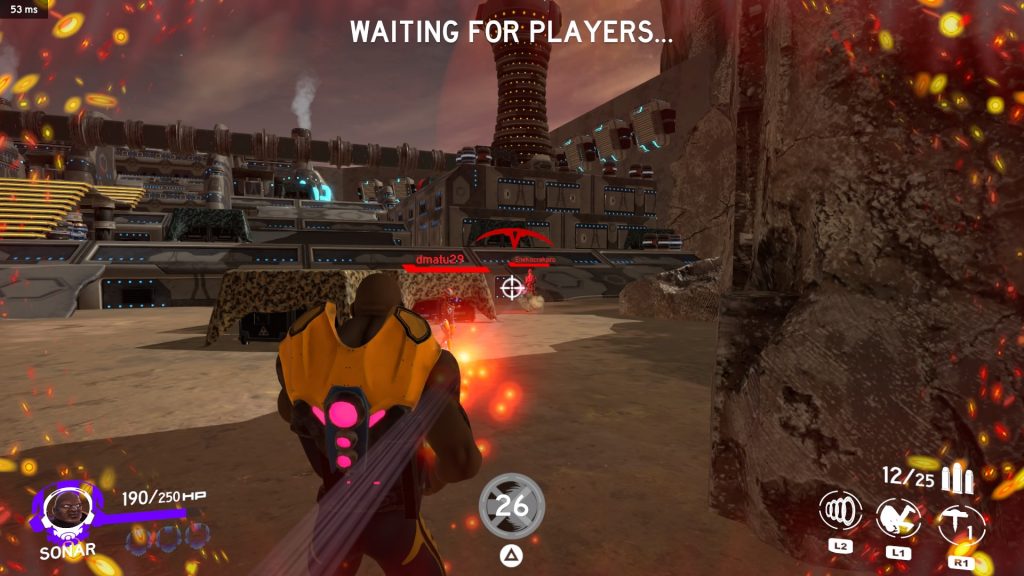 There’s an interesting approach to character skins with each one offering varying stats. I’m not entirely cool with this as skins tend to be a cosmetic option in other games. They can be used to bolster some deficiencies in firing rates, movement speeds and so forth. They don’t seem to offer anything overpowered but more a way to expand on the relatively small character pool. You can earn betcoins to unlock these which you earn each match. The reward varies on performance but you’re usually gaining 130 for a win.

It’s something you can chip away at and I’ve mostly spent my time with the default set. I feel like Sentinel and Roadblock’s firepower can be worth the boost but so many of the costumes are built around compromise. So far, I’ve seen a decent mix of team compositions and the match objectives don’t really push any players into specialised roles. Holfraine keeps things simple with fairly low stakes. Unfortunately, I’m not sure there’s much endurance on the table.

From my time with the game, player numbers are a little spotty. Sometimes teams fill up quickly and other times, you’re left waiting minutes for people to join. When you do get into a match, performance is smooth. Holfraine‘s visuals aren’t exactly polished but there is a decent amount of colour to the arena. They do change the palette between matches, even if the layout remains the same. 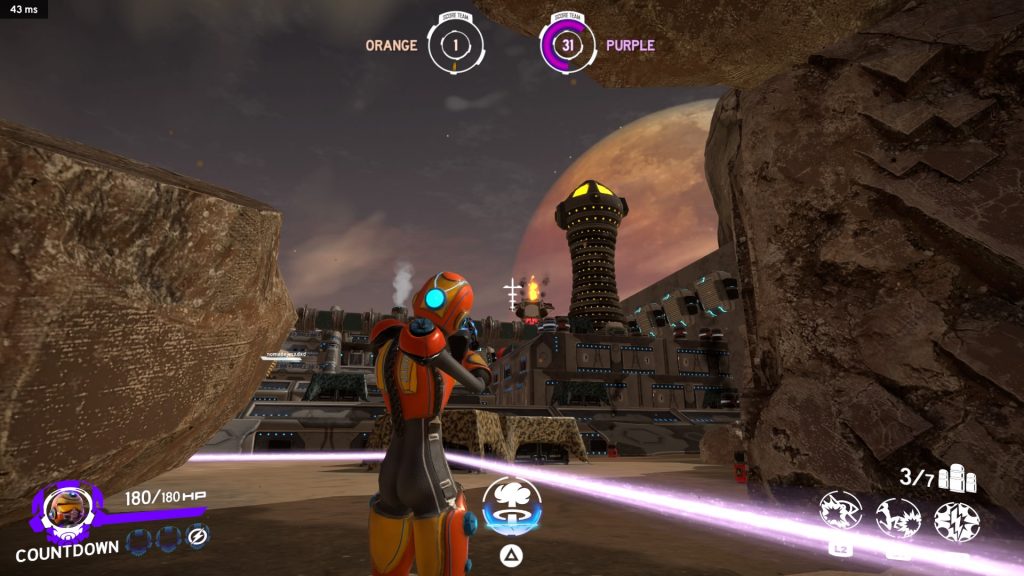 Characters lack some personality, if I’m honest. You can at least identify them from their bright costumes but they don’t speak in battle and your only real lore to them comes from the written introductions each one is given. There’s no announcer and, all in all, it’s a very basic presentation. No frills and, whilst the game is fun in short bursts, the allure of skins isn’t the persistent hook I’m after.

When I think about it, Holfraine has an experimental edge to it that at least offers some own ideas. Dropships littering the playing area with bombs, activating the objectives in stages and so on. It’s let down by a lack of variety and you’ll see everything on offer in very short order. The modest price tag is at least appealing and I did enjoy it. It just doesn’t feel especially memorable.

Holfraine
6 Overall
Pros
+ Objectives are simple to grasp with little need for communication.
+ A very quick tempo to matches.
+ Connecting to games can be quick.
+ All characters seem viable at something.
Cons
- Presentation lacks some personality and flair.
- A very bare-bones product with one mode and map.
- Skins can be a little pricey and do offer something other than cosmetic benefits.
- Teams can sometimes take minutes to fill up.
Summary
To be honest, Holfraine's a decent, bare-bones effort that does offer something cheerful in short bursts. It looks cheap in spots and there's not much personality or flair but, with a very cheap price tag, that can be forgiven. The characters have unique uses to them but I feel the map size and objectives cut any efforts to specialise them short. Holfraine's a little too simple for its own good but it's enjoyable.